EVALUATION OF ANALGESIC AND ANTI-INFLAMMATORY ACTIVITIES OF DROSERA SPATULATA

EVALUATION OF ANALGESIC AND ANTI-INFLAMMATORY ACTIVITIES OF DROSERA SPATULATA

ABSTRACT: The aim of the present study is to investigate and evaluate analgesic and anti-inflammatory potential of aqueous and methanolic extracts of Drosera spatulata using different models in rats. The aqueous and methanolic extracts of D. spatulata (at the doses of 3, 4, 5, 8 and 10 mg/Kg body weight) investigated for anti-inflammatory and analgesic activities using various experimental models. Analgesic activity was evaluated using formalin induced paw licking models in rats. Anti-inflammatory activity was evaluated using measurement of paw edema volume model in rats. Our results showed that both extracts caused a significant (P < 0.05) dose-dependent reduction of inflammation and pains induced by agent used. These results provide support for the use of aqueous and methanolic extracts of Drosera spatulata in relieving inflammatory, pain and insight into the development of new agents for treating inflammatory and pain diseases but further studies are needed to elucidate the mechanism (s) of action and phytochemical constituents of the plant.

INTRODUCTION: Inflammation and pain are common nonspecific manifestations of many diseases 1. Inflammation is a pathophysiological response of mammalian tissues to a variety of obtrusive agents including infectious organisms, toxic chemical substances, physical injury or tumor growth cause to local accumulation of plasma fluid and blood cells 2. Pain is still one of the main health problems of the world’s populations. Many bioactive compounds are involved in the modulation of pain sensation.

Eclectic physicians relied upon herbal drugs and natural remedies to treat disease 3. Although non-steroidal anti-inflammatory drugs (NSAIDs) and opiates have been used medically in these conditions, but some adverse reactions occur with these drugs such as gastrointestinal disturbances, renal damage, respiratory depression, and possible dependence 4. In recent years, there has been an increasing interest to find new anti-inflammatory and analgesic drugs with possibly fewer side effects from natural sources and medicinal plants 5. D. spatulata is a carnivorous species native to south-east Asia and Australia and one of the most widespread sundews in nature. It is a rosette-forming spoon-leaved sundew with spatulata shaped leaves that are used as feeding organs 6. The medicinal use of Drosera sp. extracts has been mentioned in the literature since XVI century as an important antitussive for different respiratory diseases, including tuberculosis 7. Drosera species contain physiologically active compounds such as flavonoids, naphthoquinones, ellagic acid and etc. Flavonoids and naphthoquinones have been reported to possess antimicrobial, anti-inflammatory and analgesic properties 8 - 9. Therefore, the present study has been planned to investigate analgesic activity of aqueous and methanolic extracts of Drosera spatulata using formalin test and anti-inflammatory activity was tested by measurement of paw edema volume.

Plant Material by Plant Tissue Culture: D. Spatulata obtained from tissue culture. The basal medium consisted of Murashige and Skoog Salt, Vitamins supplemented and without any hormones also with 3% sucrose, and solidified with 0.7% (w/v) plant agar. The medium was adjusted to pH 5.8 before adding the plant agar, and was sterilized by autoclaving at 121 °C for 20 min 10. It is also important to mention the primary plant samples identified by Plant Physiology Laboratory and the voucher specimens were confirmed and deposited in Herbarium at the Department of Plant Biology, Faculty of Science, Shahed University. Plant authentication voucher specimen no. 1360.

Preparating of Aqueous and Methanolic Extracts: Fresh leaves of D. spatulata washed thoroughly 2 - 3 times with running tap water and then once with distillated water, shade dried for period of 3 - 4 days at room temperature, subsequently ground into fine powder using motor driven grinding mill. The powder leaves (5 gr) were then macerated in demineralized water and methanol for 72 hr at room temperature by using a shaking incubator, followed by rapid paper filtration through Whatman N° 0.45 μm filter paper. The resulting solutions were evaporated under vacuum at 40 °C by Heidolphrotavapor. The obtained dried extract was kept sterile sample tube and stored in a refrigerator at - 20 °C. The extracts were evaporated to dryness under reduced pressure and the residues were stored at 4 °C 11.

Phytochemical Screening: Phytochemical investi- gations of the aqueous extract were carried out using standard methods and tests 1, 12. The test for tannins was carried out by subjecting 1 g of extract to 3 mL of distilled water, filtered and ferric chloride reagents were added to the filtrate. The extract was subjected to Fehling's test for glycosides and to frothing test for the detection of saponins. Alkaloids were identified in the alkaloid fraction obtained by a classical acid: base extraction procedure for alkaloids and analyzed by TLC in chloroform: methanol: ammonia solution 25% 8: 2: 0.5 as solvent system, spots were detected after spraying with Dragendorff’s reagent. The presence of flavonoids was determined using 1% aluminium chloride solution to the extract and yellow coloration.

Another test for flavonoid, dilute ammonia (5 mL) was added to the extract and then concentrated sulphuric acid (1 mL) was added. Steroids were detected by adding 1 mL of acetic anhydride to 0.25 g methanolic extract of each sample with 1 mL H2SO4. The color changed from violet to blue or green indicating the presence of steroids. The test for anthraquinones was performed with 0.5 g of extract boiled with 10 mL sulphuric acid and filtered. Then filtrate was shaken with 5mL CHCl3 and CHCl3 layer was removed to another tube and 1 mL of ammonia was added and color change was observed. Detection of terpenoids (triterpenoids) was carried out by adding 2 mL of CHCl3 to 0.5 g of extract and then adding carefully concentrated H2SO4 (3 mL) to form a layer and reddish to brown colorin interface 13.

Animals: 120 adult male wistar rats weighing 225-250 g were obtained from Razi institute, Karaj, Iran. During the test, each rat was placed into open polyvinyl cages (30 cm × 30 cm × 30 cm). The animals were kept under a 12 h light/dark cycle in a controlled condition at room temperature (22 ± 2 °C) and had free access to food and water. All the procedures were in accordance with the National Institute of Health Guide for the Care and Use of Laboratory Animals and approved by institutional animal care and use committee in Shahid Beheshti University of Medical Sciences 14. Institutional Animal Ethics Committee (IAEC) approval no. 13960719.

Formalin Test: To determine the analgesic activity of the extracts, formalin test was used. The procedure was the same as the method described previously 15. Aqueous and methanolic extracts (3, 4, 5, 8 and 10 mg/Kg), sodium salicylate as positive control (300 mg/Kg), and normal saline as control (1 mL/Kg) were given intraperitoneally (i.p), 30 min before running the formalin test. After pre-treatments with the extracts, 50 μl of 2.5% formalin in saline was injected subcutaneously into the planar surface of the animal right hind paw and the behavior of the animal (favoring, lifting, licking, and shaking of the injured paw) was monitored for 60 min.

Paw Edema Volume: Measurement of rat-hind paw edema was carried out by recording the volume after formalin injection according to the method of Fereidoni et al., 16 After 30 min i.p. administration of the aqueous extract, 50 μL formalin 5% was injected subcutaneous to the right hind paw to induce inflammation. The inflamed paw was inserted in a mercury column, which was fixed on a digital balance, to a specific area and the weight was read. The number read represented the weight of displaced mercury. Then, the paw volume is easily calculated using the following formula: V = m/ρ, in which ρ is the fluid density (13.6 g/mL) and m is the changes in weight recorded after insertion of the paw. The difference between the paw volume before and after the inflammation is the edema volume.

Statistical Analysis: The results are reported as mean ± S.E.M. The statistical analyses were performed using one way analysis of variance (ANOVA). Group differences were calculated by post hoc analysis using Dunnet's T3 test. For all tests, differences with values of P < 0.05 were considered significant.

RESULT AND DISCUSSION: Preliminary phytochemical study of the aqueous and methanolic extracts of Drosera spatulata, showed the presence of terpens, phenols, alkaloids, tannins and flavonoids.

Formalin Test: The effects of aqueous and methanolic extracts are shown in Fig. 1 and Fig. 2 respectively. This study showed that both of the extracts were effective in the first and second phase of formalin-induced pain in a dose dependent manner (P < 0.05).At the first (acute) and second (chronic) phases of formalin test, aqueous and methanolic extracts at all of doses showed analgesic effects. In comparison with sodium salicylate at the dose of 300 mg/kg, analgesic activity of aqueous extract of D. spatulata at doses of 8 and 10 mg/kg and methanolic extract at dose of 10 mg/Kg was about the effect of sodium salicylate.

FIG. 1: THE EFFECTS OF AQUEOUS EXTRACT OF D. SPATULATA ON PAIN SCORE IN FORMALIN TEST 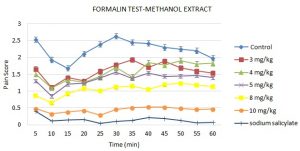 FIG. 2: THE EFFECTS OF METHANOLIC EXTRACT OF D. SPATULATA ON PAIN SCORE IN FORMALIN TEST

FIG. 3: THE EFFECTS OF AQUEOUS EXTRACT OF D. SPATULATA ON PAW EDEMA VOLUME 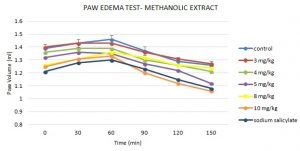 FIG. 4: THE EFFECTS OF METHANOLIC EXTRACT OF D. SPATULATA ON PAW EDEMA VOLUME

The results obtained in this study lead us to confirm that D. spatulata aqueous and methanolic extracts possess a significant effect against pain in two frequently used antinociceptive models of formalin test when compared to sodium salicylate as a standard analgesic drug. The result showed that the aqueous extract was more potent than the methanolic one. In the formalin test which is sensitive for various classes of analgesic drugs 17 and a valid and reliable model of nociception, the response to the formalin as a noxious stimulus are favouring, lifting, licking, and shaking of the injured paw by animals. Two distinct periods of high licking activity can be identified, an earlyphase lasting the first 5 min that seems to becaused predominantly by C-fibre activation due to the peripheral stimulus and a late phase lasting from 15 to 30 min after the injection of formalin. Since activity was observed in both phases of formalin-induced edema, possible activity might be due to the inhibition of release of several mediators such as histamine, serotonin, kinins and prostaglandins 18, 19. In this test, the action of analgesic drugs differs in the two phases. The centrally acting drugs (opiate analgesics) such as narcotics inhibited both phases equally, while anti-inflammatory drugs (non-opiate analgesics) specially inhibited the second phase 20, 21. As we mentioned before it is also well known that the formalin model may involve sensorial C-fibers 22 in early phase and a combined process generated by peripheral inflammatory tissue and functional changes in the dorsal horn in late phase 23, 24.

Our results showed the significant reduction of time spent in licking the injured paw by intraperitoneal administration of the aqueous and methanolic extracts at both phases. In fact, the effect of extracts on both phases showed that they contain active analgesic principles acting both centrally and peripherally. On the other hand, phytochemical screening of D. spatulata revealed the presence of considerable quantities of flavonoids and phenols. Several reports have shown the analgesic and anti-inflammatory properties of flavonoids and other polyphenolic compounds in different experimental animal models. Moreover, flavonoids are known to inhibit prostaglandin synthesis 25, 26.

ACKNOWLEDGEMENT: The data provided in this article was extracted from Ali Hakakian thesis and the work supported by Shahed and Tehran University.