EVALUATION OF ANALGESIC AND ANTI-INFLAMMATORY POTENTIAL OF “AMLAPITTANTAK RAS”, AN ANTIULCERANT AYURVEDIC MEDICINE

EVALUATION OF ANALGESIC AND ANTI-INFLAMMATORY POTENTIAL OF “AMLAPITTANTAK RAS”, AN ANTIULCERANT AYURVEDIC MEDICINE

ABSTRACT: This study is an effort to assess Analgesic and anti-inflammatory property of widely used Ayurvedic preparation Amlapittantak Ras. In current study, the effects of APR were evaluated through validated animal models of pain including Hot plate, acetic acid-induced writhing, formalin-induced paw licking and Xylene induced ear edema test. In hot plate method, APR treated mice at doses 200 and 400mg/Kg causes a significant (p<0.001) inhibition of writhing responses. When compared to the control it was shown percent inhibition of 57.9% and 61.7% at 4th hour with a dose dependent manner. In Writhing test the result was significant (P<0.1 and P<0.001) with writhing inhibition 36% and 61.33% at doses 200 and 400 mg/kg respectively. In paw licking testthe APR was highly significant analgesic effect (p=0.00195**) but the anti-inflammation result was not statistically significant. At dose 100mg/kg, APR treated male mice exerted a decrease in inflammation in the xylene induced ear edema test when compared to the corresponding control group, which was not statistically significant. From this result it can be concluded that though conventionally APR is indicated for hyperacidity non ulcer dyspepsia it may be the choice of drug for the treatment of Analgesia.

INTRODUCTION: Ayurvedic medicine -- also known as Ayurveda -- is one of the world's oldest holistic (whole-body) healing systems. It has a long tradition behind it, having originated in India perhaps as much as 3,000 years ago. In the U.S., Ayurveda is considered a form of complementary and alternative medicine (CAM). Ayurvedic medicine is an example of a well-organized system of traditional health care, both preventive and curative, that is widely practiced in parts of Asia especially in Bangladesh, Myanmar, China, Sri Lanka and Pakistan.

Today it remains a favored form of health care in large parts of the Eastern world, where a large percentage of the population uses this system exclusively or combined with modern medicine. Amlapittantak Ras is an Ayurvedic preparation which is included (page 175) in the Bangladesh National Formulary of Ayurvedic Medicine 1992 (Approved by the Government of Bangladesh vide Ministry of Health and Family Welfare Memo No. Health-1/Unani-2/89/ (Part-1) 116 dated 3-6-1991). Bangladesh National Formulary of Ayurvedic Medicine is compiled by the National Unani and Ayurvedic Formulary Committee and published by the Bangladesh Board of Unani and Ayurvedic Systems of Medicine, 38, Bangabandhu Avenue, Dhaka-1000 under the authority vested in the Board vide section 13(j) of the Bangladesh Unani and Ayurvedic practitioners Ordinance, 1983 in collaboration with the World Health Organization. It is used to relieve dyspepsia, gastritis, acid reflux disease, acid peptic disorders etc. It can be used as a source of Iron, since it contains Iron calx (Bhasma) as ingredient.

Actually, it is a preparation in which five component are used in particular amount. They are Kajjali (20 g.), Mandura (bhasma) (10g), Ayaskanta (10 g.), Abhraka (bhasma) (10 g), Amlaki (Q. S.). Kajjali is the black sulphide of Mercury. 1 Internal administration of Kajjali cures many disorders, pacifies the Tridosha (disorder of the three humours of the body) and acts as Vrushya (an aphrodisiac). Further, it is also used as Sahapana (taking together with the medicine) and Anupana (a vehicle taken after the medicine) 2.In addition to above, kajjali is also one of the prime ingredient in various Rasayoga  (herbo-mineral formulations) 3 and is used as a medicine separately.Mandura (bhasma) is purified ash of iron Ferroso ferric oxide 4-5.It is used in diseases like anaemia, oedema etc. and also used as immunomodulator (Rasayana) 6.

Ayaskanta is ash of very finely powdered trace amount of magnet stone 7.It is greatly increases blood, good alternative tonic, Promotes longevity, strength and nervous potency. Useful in dropsy, numbness, anaemia, Abhraka (bhasma) is a Herbo-mineral Ayurvedic medicine, prepared from Mica.8 It acts on both the doshas (bodily humors) and the disease to arrest the pathogenesis.

Phyllanthus emblia, syn: Emblica officinalis, family: Euphorbiaceae), In Ayurvedic system it is valued for its remarkable therapeutic activity against different diseases. It is one of the strongest rejuvenative among Indian medicinal plants due to its antimicrobial 9-10, antifungal 11, radioprotective 12,chondroprotective 13, antimutagenic, and anticancer properties 14-15, but its most extraordinary features are its anti-inflammatory 16 and antioxidative properties 17.A clinical study has also found that alma showed significant healing effect on gastric syndrome 18.

Keeping in mind the present scenario, Amlapittantak Ras (APR) an Ayurvedic preparation was studied utilizing laboratory animals to assess Its Analgesic and anti-inflammatory property. The result of the present study demonstrated that APR posse’s significant amount of Analgesic activity which is evident in three analgesic models.

Collection of materials: The selected material for tablet preparation was collected from Sri Kundeswari Aushadhalaya Ltd, Chittagong specially prepared according to National Ayurvedic Formulary (BNAF, 1992).The formulation of Amlapittantak Ras is – Kajjali (20 g.), Mandura (bhasma) (10g), Ayaskanta (10 g.), Abhraka (bhasma) (10 g), Amlaki (Q. S.) All dried drug powder were mixed with equal quantity of water and kept overnight. Next day they are mixed and filtered through a fine cloth. After drying it was powdered and made into pills then stored in a well Stoppard bottle.

Dose of administration: For the pharmacological  experiment, the  tablet was mixed with defiant water and administered  at a volume  such that  it  would  permit  optimal dosage  accuracy  without contributing much to the total increase in the body fluid. For all the pharmacological studies the drug were administered per oral route at three different doses of 100 mg/kg, 200 mg/kg, and 400 mg/kg body weight.

Route of administration: For all the pharmacological studies, the drug was administered orally. Some of the neuromodulators were administered intra- peritoneal (I.P.)

Experimental animal: Male and female mice (Swiss-Webster strain, 20-40 gm body  weight) bred in the Animal  house of the Department  of  Pharmacy, Jahangirnagar  University,  were  used  for the  pharmacological  experiments. They  were  kept in cages  having  dimensions of  (30x 20x 13) cm3  and  soft  wood  shavings were  employed  as bedding in the  cages.

The animals  were  provided  with  standard  laboratory  food  and  tap water  “ad libitium”  and  maintained  at  natural  day  night  cycle. They  were  “fed  with  mouse chow” (prepared  according  to  the  formula  developed  at  BCSIR, Dhaka).

Before  starting  an  experiment  the  animals  were  carefully  marked  on  different  parts  of  their  body, which  was  later  used  as  identification  mark  for  a particular animal, so that the response of a  particular mouse prior to and after the  administration  could   be  noted   separately.

Hot Plate Test Method: Experimental animals are divided into four groups designated as group-I, group-II, group-III and group-IV consisting of six mice in each group for control, positive control (standard) and 2 test samples group respectively. Each group received a particular treatment i.e. control (distilled water 10ml/kg, p.o.), positive control (Diclofenac sodium, 25 mg/kg, p.o.) and the test sample (APR of 200 mg/kg, p.o. & 400 mg/kg, p.o. respectively).A 600 ml test beaker was placed on thermostat hot plate . The temperature was regulated to 50°±1°C. Each mouse was placed in the beaker (on the hot plate) in order to obtain its response to electrical heat induced nociceptive pain stimulus. A cut off period of 20 seconds 19 was observed to avoid damage to the paw.  Reaction time was recorded when animals licked their fore or hind paws, or jumped prior to and 0, 30, 60, 120, 180 and 240 minutes after oral administration of the samples 20-21.

Acetic Acid induced Writhing Method: The analgesic activity of the samples was evaluated using acetic acid induced writhing method in mice (Ahmed et al., 2004). In this method, acetic acid is administered intraperitoneally to the experimental animals to create pain sensation. The experimental animals were randomly divided into four groups, each consisting of ten animals. Group I was treated as ‘control group’ which received 1% (v/v) Tween-80 in water at the dose of 10 ml/kg of body weight; group II was treated as ‘positive control’ and was given the standard drug Diclofenac sodium at dose of 25 mg/kg of body weight; group III and group IV were test groups and were treated with the APR at dose of 200 and 400 mg/kg of body weight respectively. Control vehicle, standard drug and extracts were administered orally, 30 minutes prior to acetic acid (0.7%) injection. Then after an interval of 15 minutes, the number of writhes (squirms) was counted for 5 min. full writhing was not always accomplished by the animal, because sometimes the animals started to give writhing but they did not complete it.

Formalin induced Paw Licking (Analgesic + Inflammation) test: Formalin 1% was administered to mice by intra-plantar route, and immediately the licking time was registered for 5 min (first phase, neurogenic). Twenty minutes after the beginning of the experiment (second phase, inflammatory) the licking time was registered for other 5 min. Experimental drug was administered 60 min (p.o.) before the formalin injection 22.

Xylene-induced Ear Edema in mice: Male Swiss mice were divided into groups of ten mice each. After 30 min of the i.p. injection of the extract, xylene (0.03 ml) was applied to the anterior and posterior surfaces of the right ear. Mice were sacrificed 2 h after xylene application and both ears were removed. Circular sections of both treated and untreated ears were taken using a 7 mm diameter cork borer and weighed. The difference in weight between left untreated ear sections and right treated ear section was calculated (Tang et al., 1984).

Statistical Analysis: Data were presented as Mean ± SEM (Standard Error of the Mean). Data were analyzed by one-way ANOVA followed by Dunnett’s t test Unpaired "t" tests were done for statistical significance tests. SPSS (Statistical Package for Social Science) for WINDOWS (Version 12) was applied for the analysis of data. p = 0.05was taken to be the level of significance.

Hot plate Method: Analgesic effect of the APR with Statistical evaluation of the results using the hot –plate method are shown in Table 1. It was found that the APR and Diclofenac sodium at the doses 200, 400 and 25 mg/kg respectively caused a significant (p<0.001) inhibition on the writhing responses. When compared to the control it was shown percent inhibition of 60.8%, 57.9% & 61.7% at 4th hour which show dose dependent analgesic action. Results are shown in Table 2.

The criterion for statistical significance was *p < 0.05 (significant) & **p < 0.001 (highly significant) when compared to the control group.

TABLE 2: PERCENT INHIBITION OF THE STANDARD AND THE TWO DIFFERENT CONCENTRATIONS OF THE EXTRACTS

TABLE 3: PERCENT INHIBITION OF THE STANDARD AND THE TWO DIFFERENT CONCENTRATIONS OF THE EXTRACTS IN ACETIC ACID INDUCED WRITHING TEST

Formalin induced Paw Licking (Analgesic + Inflammation) test: APR at dose 100mg /Kg exerted a very sharply increase in analgesic activity and mildly increase in anti- inflammatory activity in male mice compared to the respective control group. The analgesic statistical result of APR was highly significant (p=0.00195**) but the anti-inflammation result was not statistically significant. From the observation of this experiment, it can be suggest that APR may have analgesic and also mild anti-inflammatory activity. Tabular and Graphical presentation of the effect of APR in Formalin induced paw licking test is given in Table 4 and Figure 1-2. 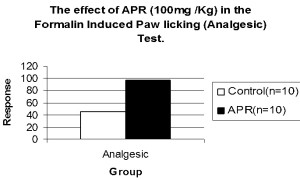 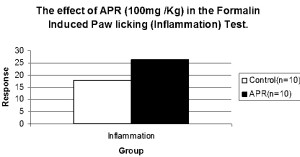 From the findings of this experiment, it can be suggested that APR may have inflammation deduction activity opposite to the xylene. Tabular and graphical presentation of the effect of ‘APR’ (100mg/kg) on the Xylene induced Ear Edema Test utilizing Male mice in given in Table 5 and Figure 3. 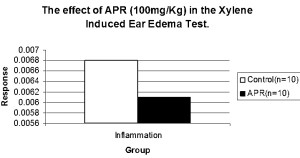 FIGURE 3: GRAPHICAL PRESENTATION OF THE EFFECT OF APR (100mg/kg) IN THE XYLENE INDUCED EAR EDEMA TEST

CONCLUSION: Ayurvedic medicine is often ignored by considering an alternative therapy. But it can be a cheaper and convenient replacement for people of Developing countries.

The present study reveal that as APR has long been used as hyperacidity on ulcer dyspepsia so it may provide an alternative way for the treatment of pain, without addiction liability and gastric discomfort caused by NSAIDs and Opoids.

ACKNOWLEDGEMENT: We are greatly indebted to Professor M. Shahabuddin Kabir Choudhuri for his invaluable guidance and support throughout the entire work. We are also thankful to Mr. Azizul Islam, Marketing Manager, Eskayef Bangladesh Limited for his support and inspiration for Ayurvedic Research.