EVALUATION OF ANTHELMINTIC ACTIVITY OF LEAF EXTRACTS OF BUTEA MONOSPERMA

EVALUATION OF ANTHELMINTIC ACTIVITY OF LEAF EXTRACTS OF BUTEA MONOSPERMA

Butea monosperma (Fabaceae) is distributed all over India and has been used by triable as well a local people widely. Locally it is known as “Markundi” and a cool infusion of the flowers is taken in the treatment of diabetes among the Sahariya of Northwest M.P. Butea monosperma is used in the treatment of leprosy, gout, diarrhea, anti-inflammatory, diuretic and leucorrhoea. In the present work the alcoholic and aqueous extracts of leaves of Butea monosperma were evaluated for its anthelmintic activity against adult earthworms (Phertima prosthuma). The activities of the extracts were compared with standard Albendazole. Both the extracts and standard were prepared in saline water. The alcoholic and aqueous extract of the leaves showed significant anthelmintic activity and it was found that the aqueous extract activity is higher than alcoholic extract.

INTRODUCTION: Butea monosperma (Lam.) belonging to family Fabaceae (sub family Papilionaceae) is a medium size tree. It is generally called as Palash, Dhaka, Khaki in mixed or dry deciduous forests in western and central part of India. Its leaves are large & 3- foliate, flowers are scarlet red with orange tinge. Pods are flat and one seeded. The species of Butea monosperma are found in India include Butea monosperma (lam) Taub, B. Parviflora, B. minor, & B. subperba. It is also known as flame of forest. All part of plant has been used but leaves are a particular interest from a medicinal point of view as an anti diabetic, anti-asthematic and anti-inflammatory used in the treatment of leprosy, gout, diarrhea, diuretic and leucorrhoea1. The present study deals with the anathematic effect of leaves using a standard laboratory models2.

Plant material: The leaves of Butea monosperma (Lam.) were collected from Bhopal, (M.P.) with the help of local tribal and were identified. Fresh plant material was collected in bulk, washed under running tap water to remove adhering dust, dried under sunlight and pulverized in a mechanical grinder. The powder was passes through sieve no. 40 and used for extraction3.

Preparation of ethanolic extract: A weighed quantity of dried powdered leaves of plant (70 gm) subjected to hot solvent extraction in a soxhlet apparatus (50 cycles per each batch) using ethanol (95 %), at a temperature range of 550C to 650C. The filtrate was evaporated to dryness at 400C under reduced pressure in a rotary vacuum evaporator. The percentage yield of ethanolic extract was 5 % w/w4.

Evaluation of Anthelmintic activity: The anthelmintic activity was evaluated using the adult Indian earthworm Pheritima posthuma. It was used due to its anatomical and physiological resemblance with the intestinal roundworm parasite of human being. The earthworms were collected from moist soil. The suspensions of extracts were prepared in normal saline in different concentration. Solution of similar concentration of the reference drug albendazole was also prepared in normal saline5, 6.

Activity against Earthworms: 50 mg/ml, 20 mg/ml, 10 mg/ml, 7.5 mg/ml, 5.0 mg/ml concentration of aqueous extract of Butea monosperma (AEBM), ethanolic extract of Butea monosperma (EEBM) and standard drug albendazole were prepared and poured in to petri-dishes. Six earthworms were placed in each petri dish. The Anthelmintic activity was determined by the method fallowed by Gaind and Budhiraja7. The living and viable worms were kept in observation and the paralysis and dead time was recorded. The motionless worms were transferred to warm water at 400C to confirm that they were dead8. The paralysis and dead time of earthworms against different extracts is shown in Table 1 and Fig 1. 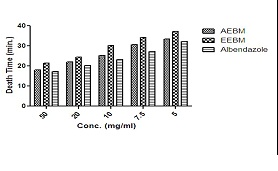 RESULT AND DISCUSSION: It was observed that the aqueous extract is more potent than ethanolic extract even through both the extract are endowed with significant Anthelmintic property. The activity reveals the concentration dependence nature of different extract. Potency of extract was found to be inversely proportional to the time taken for paralysis/death of the worm. The activity was compared with the aqueous and ethanolic extract.

CONCLUSION: Based on the results we can suggested that the anthelmintic effect of Butea monosperma aqueous extract as well as ethanolic extract, is related to the possible presence of alkaloid and tannins in the extract. The present study justifies the folkore claims of its Anthelmintic property. It would be interesting to isolate the possible constituents those are responsible for such activity.

ACKNOWLEDGMENT: The authors are grateful to college authorities for constant support throughout this work.