Development of anthelmintic resistance and high cost of conventional anthelmintic drugs lead to the evaluation of medicinal plants which acts as an alternative source of anthelmintics. The present study has been undertaken to perform the evaluation of anthelmintic activity of Plumbago zeylanica belonging to family Plumbaginaceae. In the current study, experiments were conducted to evaluate the possible anthelminitic effects of various extracts of the roots of Plumbago zeylanica. Various concentrations (5, 10, 15, 20mg/ml) of water and methanol extracts were tested and results were expressed in terms of time for paralysis and time for death of worms.  Piperazine citrate was taken as a reference standard drug.The anthelmintic activity was observed by gradually increasing the dose of extract.  Methanolic extract of Plumbago zeylenica showed higher activity as compared to water extract.

INTRODUCTION: It is estimated that there are more than 10,000 species of parasitic flukes. Tapeworms include about 5,000 species. Roundworms are an incredibly diverse group, with over 15,000 species. Flukes, tapeworms and roundworms are found in nearly every type of ecosystem. Adult flukes are leaf-shaped flatworms. Prominent oral and ventral suckers help maintain position in situ. Flukes are hermaphroditic except for blood flukes, which are bisexual. The life-cycle includes a snail intermediate host.

Adult and larval roundworms are bisexual, cylindrical worms. They inhabit intestinal and extra intestinal sites, nematodes are cylindrical rather than flattened; hence the common name roundworm. The body wall is composed of an outer cuticle that has a noncellular, chemically complex structure, a thin hypodermis, and musculature. The cuticle in some species has longitudinal ridges called alae. The bursa, a flap like extension of the cuticle on the posterior end of some species of male nematodes, is used to grasp the female during copulation.

Ascaris lumbricoides is one of the most common of the intestinal worms. It is a roundworm and infection with it is called Ascariasis. Children are more frequently and more heavily infected than adults because of their habit of putting all kinds of things into their mouths. If these objects are contaminated with Ascaris eggs from human faeces the children swallow the eggs and thus become infected.

The round worm lives in the small intestines. The female lays as many as 200,000 eggs a day. These are passed in stool and develop in the soil. They are then transmitted as follows:

Usually, children with mild infestation are symptom less. They may, however, present with symptoms indicative of larval migration like pneumonitis or urticarial rash. There may be some vague abdominal discomfort. Sometimes a worm may leave the body through vomitus or stool.

Anthelmintics or antihelminthics are drugs that expel parasitic worms (helminthes) from the body, by either stunning or killing them. They may also be called vermifuges (stunning) or vermicides (killing), pertaining to a substance that destroys or prevents the development of parasitic worms, such as filariae, flukes, hookworms, pinworms, roundworms, schistosomes, tapeworms, trichinae, and whipworms.

To be an effective Anthelmintic, a drug must be able to penetrate the cuticle of the worm or gain access to its alimentary tract. This in itself presents difficulties for the design of good Anthelmintic drugs since some worms are exclusively haemophagous (blood eating) while others are best described as 'tissue grazers'. The route and dose of anthelminthic is, therefore, important and must be chosen carefully since parasitic worms cannot be relied upon to consume sufficient amounts of the drug to be effective.

An anthelminthic drug can act by causing paralysis of the worm, or by damaging its cuticle, leading to partial digestion or to rejection by immune mechanisms. Anthelminthic drugs can also interfere with the metabolism of the worm, and since the metabolic requirements of these parasites vary greatly from one species to another, drugs that are highly effective against one type of worm can be ineffective against others.

Plumbago is a genus of 10-20 species of flowering plants in the family Plumbaginaceae, native to warm temperate to tropical regions of the world. Common names include plumbago and leadwort (names which are also shared by the genus Ceratostigma). The generic name, derived from the Latin words plumbum ("lead") and agere ("to resemble"), was first used by Pliny the Elder. Plumbago zeylanica consist of dried roots of Plumbago zeylanica, a climber type evergreen medicinal plant; this garden plant is growing wild in Bengal, Uttar Pradesh, Southern India and Ceylon. This is an allied species and is considered to be the cultivated variety of P.rosea.

Commonly is known As Cita. Roots are used for medicinal purposes. Plumbago zeylanica is an herb that grows wild in India and has been used by rural and tribal people for hundreds of years as a traditional system of medicine. It is also used in Ayurvedic medicine. Plumbagin is a powerful irritant with strong antiseptic and stimulant properties. The root and root bark have stomachic, carminative, astringent, anthelmintic, laxative, expectorant, tonic, alterative, abortifacient, and alexipharmic properties.

Extraction: The roots were washed, dried and powdered; the powder was then weighed and was macerated with 200ml of Methanol and 200ml of water respectively for seven days. After seven days of maceration, both the solvents were filtered and concentrated by means of vacuum rotary evaporator.

Collection of Experimental organism: Indian adult earthworms (Pheretima  posthuma) collected from moist soil and washed with normal saline to remove all faecal matter were used for the anthelmintic study.The earthworms of 3-5 cm in length and 0.1-0.2cm in width were used for all the experimental protocol.

Evaluation of Anthelmintic activity of Plumbago zeylanica: Methanolic extract(ME),Water extract(WE) from the roots of  Plumbago zeylanica were investigated for their anthelmintic activity against Pheretima posthuma.Various concentrations (5-20 mg/ml) of each extract were tested in the bioassay , which involved determination of time of paralysis and time of death of the worms.

Observations were made for the time taken to paralyze and death of individual worms. Time for paralysis was noted when no movement could be observed except when the worms were shaken vigorously. Death was concluded when the worms lost their motility followed with fading away of their body colors.

RESULT: Methanolic extract (ME), Water extract (WE) from the roots of Plumbago zeylanica were investigated for their anthelmintic activity against Pheretima posthuma.Various concentrations (5-20 mg/ml) of each extract were tested in the bioassay, which involved determination of time of paralysis and time of death of the worms. Observations were made for the time taken to paralyze and death of individual worms. Time for paralysis was noted when no movement could be observed except when the worms were shaken vigorously. Death was concluded when the worms lost their motility followed with fading away of their body colors (Table 1 and graph 1 & 2). 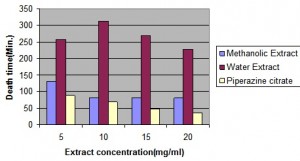 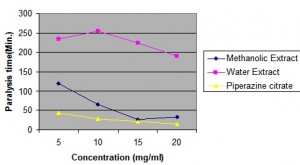 Evaluation of Anthelmintic activity: Anthelmintic effect of different extracts of Plumbago zeylanica roots was evaluated. As per the results shown in Table 1, the predominant effect of Piperazine citrate on the worm is to cause a flaccid paralysis that result in expulsion of the worm by peristalsis. Piperazine citrate by increasing chloride ion conductance of worm muscle membrane produces hyperpolarization and reduced excitability that leads to muscle relaxation and flaccid paralysis. Both extracts showed significant anthelmintic activity on selected worms. Methanolic extract found to be more active as compared to water extract.

CONCLUSION: Methanolic and aqueous extracts of Plumbago zeylanica roots were shown anthelmintic activity on Indian adult earthworms (Pheretima  posthuma).Further studies are necessary to identify the chemical moieties responsible for anthelmintic activity and also to evaluate mechanism of action at cellular and molecular level.

ACKNOWLEDGEMENT: The author is thankful to all staff members, colleagues and Rofel Pharmacy College, for providing facilities and supports to carry out this work.