EVALUATION OF ANTI-DEPRESSANT ACTIVITY OF ROFLUMILAST IN ALBINO MICE

EVALUATION OF ANTI-DEPRESSANT ACTIVITY OF ROFLUMILAST IN ALBINO MICE

ABSTRACT: Depression is a collective term used for the mental condition characterized by loss of interest, inability to concentrate, eat or sleep, reduced energy levels, together with reduced self-esteem. To date, the medicines available are often associated with several adverse conditions and fail to treat comorbidities it entails. Phosphodiesterase (especially its inhibitors) are recently gaining attention owing to their benefits on the central nervous system. With this background, the present study aimed to evaluate the anti-depressant activity of Roflumilast using albino mice. 8 groups of 6 albino mice of either sex were randomly selected, 4 groups were allocated for forced swim test (FST) and 4 for tail suspension test (TST). Group 1 - Normal saline (10ml/kg), Group 2 -Imipramine (20mg/kg), Group 3 T1 - Roflumilast (0.06mg/kg), Group 4 T2 - Roflumilast (0.06mg/kg) and Imipramine (10 mg/kg). Drugs were administered orally for 14 days. The acute study was done on day 1 and the chronic study on day 14. Percentage reduction of immobility period during FST by Imipramine, T1 and T2 are 51.9%, 37.5%, and 44% respectively for acute study and 79.8%, 57%, 66.4% for chronic study. The percent reduction of immobility period during TST by Imipramine, T1 & amp; T2 is 36.9%, 26.9%, 33%, respectively for acute study and 57.6%, 47.1%, 49.6%, respectively for chronic study. Roflumilast showed a considerable anti-depressant effect. It potentiates the effect of Imipramine, indicating better efficacy as an adjuvant with standard anti-depressant agents. The effect is more pronounced in the chronic study.

INTRODUCTION: Depression is a common mental condition characterized by loss of interest, inability to concentrate, eat or sleep, reduced energy levels, together with reduced self-esteem. Depression is often associated with another condition known as anxiety, which is characterized by restlessness, fatigue, irritability, muscle tension, and sleeplessness. These symptoms are normal under certain circumstances 1.

Yet, repeated appearance of such symptoms can lead to chronic conditions that require medical interventions for treatment. Chronic depression is primarily a result of changes in the monoamine transmitters of the brain, norepinephrine, serotonin, and dopamine, which leads to the various symptoms appearing during depression 2.

A prolonged depressed mood exceeding a period of two weeks associated with a lack of interest in daily activities is collectively known as major depressive disorder (MDD) 3. The most alarming factor of this disorder is the suicidal tendency owing to the loss of self-worth, which is often unnoticed by most people suffering from the disorder.

It is known that over 5% of the general population suffers from this disorder. It has been estimated that about 850,000 lives are lost annually around the globe, with close to 15% of it being from India 4. The World Health organization reports close to 450 million people are affected by mental or behavioral disorders. More often, this goes unnoticed due to the lack of knowledge regarding the existence of such a disorder and in most other cases, due to the lack of acceptance of self-suffering from it. The global economic burden because of the disorder is expected to increase to 15% by the end of 2020. A study suggests that the female population is vulnerable to the disease over that of the male 5.

It is surprising to learn that while two-third of the population respond to the treated drug, the remaining one-third responds to a placebo itself 6. Yet, for the treatment of the clinical condition, medical interventions are the only hope. More recently, phosphodiesterase (more specifically PDE4 inhibitors) has gained huge popularity due to its effect on the central nervous system. The enzyme is responsible for regulating intracellular cAMP levels, which in turn has a potent role in regulating the alcohol intake in severe alcoholics 7. Little is known about the role of PDE inhibitors in behavioural disorders such as depression and anxiety. Earlier studies by several groups have suggested the potential role of PDE4 inhibitors as anti-depressants 8-10. The potential anti-depressant and anxiolytic activity observed in the PDE4 inhibitors share neurobiological similar mechanisms 9.

Preparation of Drugs: Ethanol solution, standard drug-imipramine, and roflumilast were purchased, and 10% ethanol solution (v/v) was prepared using anhydrous water, and the two drugs were dissolved. Administration of the drug was via subcutaneous mode or intraperitoneal injections.

Treatment with Ethanol and Drug:

Animals: Albino mice aged 3-4 months weighing 25-30 g were purchased from a local breeder and housed in spacious cages at the central animal facility of our institution.

They were maintained under 12 hour light/dark cycle with a temperature of 25±2° C and humidity of 65±5% with routine access to food and water. The ethical committee approval was received and the experimental studies were performed between 11AM and 3 PM. The experiments were performed as per the guidelines of the institutional ethical committee (JSSMC/ IAEC/05/April –2015).

Grouping: The anti-depressant activity of the drug roflumilast was evaluated using the forced swim test (FST) and tail suspension test (TST). The drugs were administered orally 1 h before testing for acute study and for 14 days for chronic study. The experiment was repeated on 14th day 1 h after drug administration.

The mice were divided into 8 groups, 6 animals for each test.

Forced-Swim Test: The procedure for this test was followed as per Gong et al., 2017 15. Mice were placed within a plastic cylinder (25 × 12 cm) filled with 15 cm of water at room temperature. This facilitated free swimming of the mice. Duration of mice floating in an upright position just sufficient to maintain the head over the surface of the water and without any additional movement was considered as the duration of immobility (recorded during the last 4 min of the test), and then mice were removed from the cylinder and dried. Care was taken to ensure water changing after each test to eliminate the urine and other components released by the mouse during the test period.

Tail Suspension Test: Each mouse was suspended at 50 cm above the ground level using adhesive tape stuck at 1 cm from the tip of the tail. The duration of immobility was recorded up to 6 min, and it was considered immobile when they stayed motionless without activity. A compound that reduces such immobility and elevates active behavior is known to reduce depression-like behavior.

RESULTS: Several previous studies have reported the beneficial effects of Imipramine in the treatment of depression. However, many studies also report its ill effects such as sedation, delirium, confusion, weight gain because of elevated appetite and dizziness. Therefore, in our study, we evaluated the anti-depressant effects of roflumilast alone and along with the standard drug imipramine during alcohol abstinence.

The duration of immobility in each test is illustrated in the tables below in Tables 1 and 2. These results suggest that roflumilast has a significant anti-depressant effect, and it has a better efficacy on chronic use and as an adjuvant to conventional drugs.

n = 6 in each group; Values are in Mean +SD. Data was analysed by one-way ANOVA followed by Post hoc Bonferroni’s test.*p<0.05 was considered statistically significant

n = 6 in each group; Values are in Mean + SD. Data was analyzed by one way ANOVA followed by Post hoc Bonferroni’s test.*p<0.05 was considered statistically significant

DISCUSSION: Depression that is prolonged leads to one of the most devastating psychiatric disorders, which are often difficult to diagnose and treat 16. In the present study, the administration of the PDE4 inhibitor roflumilast alone and in combination with the standard drug imipramine were evaluated for attenuation of acute and chronic depressive-like behavior in mice. Plausible reasons for the development of depression include inflammation because of altered expression of inflammatory genes, malnutrition, reduced monoamine neuro-transmitters, and apoptosis occurring at the frontal cortex 17. Despite the etiology not being clearly understood, depression is likely a result of altered monoamine neurotransmitter production in the body 18. 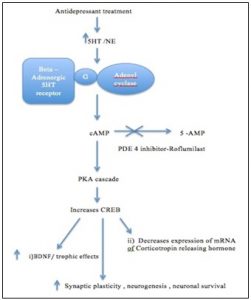 There are numerous therapies available for treating depression, but a major problem is that they are often unpredictable in terms of their responses. 5-HT and norepinephrine levels are the primary targets of most anti-depressants but are associated with several adverse effects 19. Hence, the quest for new options in anti-depressant treatment is a necessity. Signal transduction and gene signaling cascades have evolved as more potent targets for novel anti-depressant agents as against targeting the interaction between a neurotransmitter and its corresponding receptor. One such exploited target is that of the cyclic AMP second messenger system 20. cAMP response element-binding proteins (CREBP) get activated by the binding of cAMP to its receptor, which are known to activate a cascade of signaling. This has been identified to have implications for the development of depression. In addition, any elevation in the CREBP activity is likely to improve the neural plasticity, thereby contributing to the amelioration of clinical symptoms of depression. The proposed mechanism of action of the PDE4 inhibitors has been given in Fig. 1.

In our study, the effects of the oral administration of roflumilast alone and in association with the standard anti-depressant drug imipramine on depressive-like behavior in mice were evaluated. Interestingly, oral administration of roflumilast lowered the immobility time in the FST and TST and was on par with that of Imipramine. Therefore, in our study, the effect of the two drugs alone and in combination on acute and chronic depressive behaviors was evaluated by determining the immobility time by FST and TST on the 1st and 14th day of drug administration. It was noted that while FST on the 14th day showed a remarkable reduction in the immobility time, TST was relatively less significant. Overall, the study demonstrated that optimal activity was observed in the roflumilast and combination-treated groups when compared with that of the imipramine-treated group alone. The difference between the FST and TST results observed in our study agrees with several other studies 15, 21. Although the exact reason for this difference is not known, it appears that TST is low on sensitivity compared to that of FST in assessing PDE4 inhibitors involved in anxiety. Studies have confirmed that PDE4 inhibitors significantly alter ethanol withdrawal-induced anxiety and depressive behavior 22. Therefore, our study has provided a strong basis and agrees with many other studies suggesting the beneficiary uses of PDE4 inhibitors in treating depression.

The pathophysiology and treatment of the major depressive disorder (MDD) entails the altering of the second messenger Camp 23-26. Therefore, based on this hypothesis, a reduction in the cAMP-mediated signaling cascade has implications in depression and its treatment. Most anti-depressants have shown improvement in the cAMP signal transduction as one of the common modes of action 27. Previous studies have also evaluated the levels of PDE4 in the brain, which were seen decreasing in MDD conditions without medical interventions.

ACKNOWLEDGEMENT: We would like to express our sincere gratitude to faculty members and staff of the Department of Pharmacology, Biochemistry, JSS medical college, JSS Academy of Higher Education and Research (JSS AHER) Mysuru - 570015, Karnataka, India, for their time and corporation in completing this work.

CONFLICTS OF INTEREST: The authors declare that there is no conflict of interest