ABSTRACT: The leaves of Corchorus trilocularis possesses several bioactivities and is used in traditional medicinal systems. However, its anti-diabetic activity has not been scientifically investigated so far. The present study was carried out to evaluate the anti-diabetic activity of chloroform extract extract of Corchorus trilocularis (family:  Tiliaceae) leaves in Streptozotocin induced diabetic rats. Chloroform extract showed presence of saponins, phytosterols, flavonoids, phenols, steroids and terpenoids. From  the  toxicity study  it  was  observed  that  chloroform extract  of  Corchorus trilocularis (CECT)  was  nontoxic up  to  the  dose  of  2000 mg/kg body weight. In this study, animals received continuous oral administration of CECT for a period of 21 days at the doses of 200 mg/kg and 400 mg/kg body weight. The effect of CECT was compared with oral dose of 5mg/kg Glibenclamide. The  results  showed  that  the  CECT  significantly  lowered  the blood  sugar  level  of hyperglycemic rats in a dose dependent manner.  CECT   reduced  glycosylated  hemoglobin,  lactate  dehydrogenase  and creatinine  kinase  levels  in  streptozotocin  treated  animals. The extract also ameliorated oxidative stress Parameters -TBARS, catalase and superoxide dismutase activity and glutathione content. In conclusion, the chloroform extract of Corchorus trilocularis leaves showed a significant anti-diabetic activity in streptozotocin induced diabetic rats possibly  through  increased  secretion  of  insulin  and  the  effect  may  be attributed  to  the  presence  of  flavonoids  and  phenolic  compounds  present  in extract.

INTRODUCTION: Diabetes  mellitus  is  a  major  and  growing  public  health problem  throughout  the  world.  According to WHO projections, the prevalence of diabetes is likely to increase by 35%.  Currently there are over 150 million diabetic patients worldwide.  Recent  estimates  project  that  the  number  of patients  diagnosed  with  Type  II  diabetes  will  more  than double  to  300  million  before  2025.

India has more than 30 million people with diabetics. It is estimated that by 2025, the number  of  diabetics  will  rise  to  57  million  in  India,  the highest number of diabetics in the world.1, 2

To control type II diabetes very low fat and lower glycemic index diet, regular exercise and weight control has evident potential but major proportion of population suffering from diabetes continue to eat whatever they want, avoiding exercise and stay fatty. Treatment of insulin dependent diabetes mellitus with insulin and non insulin dependent diabetes mellitus with synthetic oral hypoglycemic agents such as Sulphonylurea, Biguanides, thiazolidinediones etc. is currently available. However, many of these oral antidiabetic agents have a number of serious adverse health effects. Therefore, the search for more effective and safer hypoglycemic with greatest effect on postprandial hyperglycemia including α-amylase, insulin and α-glucosidase has continued to be an important area for investigation.

Traditional medicines readily available from medicinal plants offer great potential for the discovery of new antidiabetic drug. Diabetes mellitus was known to ancient Indian physicians as ‘madumeha’.3 Diabetes is defined as a state in which homeostasis of carbohydrate, protein and lipid metabolism is improperly regulated as a consequence of a relative or absolute deficiency of insulin secretion, resistance to insulin action or both at one or more points in the complex pathways of hormone action. This results primarily in elevated fasting and postprandial blood glucose levels. If this imbalanced homeostasis doesn’t return to normalcy and continuous for a protracted period of time, it leads to hyperglycemia that is due course turns into a syndrome called diabetes mellitus.4

Chemicals: Free sample of Glibenclamide was procured from Nicholas Piramal, Mumbai and Streptozotocin (STZ) (purchased from Sigma, St Loius, MO, USA). All other chemicals used were of analytical grade.

Plant material: The leaves of Corchorus trilocularis were collected from outfield near Tirunveli, Tamilnadu, India, during the month of July 2013. Plant was identified by the Dr V. Chelladurai, Retd. Research Officer, Botany (Scientist C) at Central Council for Research in Ayurveda, Government of India.

Preparation of plant extract: The collected plant leaves were washed thoroughly in tap water, dried in shade at  room  temperature  and  reduced  to  coarse  powder using  a  mechanical  grinder. The dried powder material was extracted with chloroform by hot continuous extraction in a Soxhlet’s apparatus for 48 h. The extract was concentrated under reduced pressure and stored in an air tight container.

Phytochemical screening: The chloroform extract was screened for the presence of various  phytoconstituents  like  steroids,  alkaloids,  tannins, flavonoids,  and  glycosides  by  employing  standard phytochemical tests.5, 6

Animal: Wistar Albino rats of either sex (150 to 200 g) were purchased from DRDE, Gwalior. They were maintained under standard laboratory conditions at 25 ± 2°C, relative humidity (50 ± 15%) and normal photoperiod (12-hour light-dark cycle) were used for the experiment. Commercial pellet diet MFD, by Amrut trade corporation, Gwalior were given to the experimental animals throughout the study. The Experimental Protocol was duly approved by IAEC having proposal No-IPS/COP/IAEC/02.

Toxicity study: Acute oral toxicity test was carried out according to the OECD guidelines No. 423.7 Wistar albino rats were kept for overnight fasting prior to drug administration. A total of three animals were used, which received a single oral dose in 2000 mg/kg, body weight of chloroform extracts. The animals were observed for a period of 24 hr for the changes in behavior, hypersensitivity reactions etc. Mortality was determined over a period of 2 weeks. The test was repeated in another three rats to confirm the acute toxic class of LD50 determination.

Induction of diabetes: After fasting 18 hours, the rats were injected intraperitoneal injection through tail vein with a single dose of 40 mg/kg Streptozotocin (Sigma, St. Louis, Mo, USA), freshly dissolved in citrate buffer (pH 4.5). After injection, the rats had free access to food and water and were given 5% glucose solution to drink overnight to counter hypoglycemic shock. Diabetes in rats was observed by moderate polydipsia and marked polyuria. The diabetes was confirmed by estimating the blood glucose level after 3 days by glucometer based on glucose oxidation method. Rats having blood glucose level more than 250 mg/dl were selected for further study.

Experimental protocol: To assess the anti-diabetic activity, the animals were divided in five groups (n=6), as shown below:

The test drug and standard drug was administered orally for a period of 21 days from starting day of diabetes.

Biochemical estimation in pancreatic tissue: After blood collection, all the animals were sacrificed and pancreas was dissected out. Tissue was washed with ice cold saline, weighed and minced; 10% homogenate was prepared in 0.15M ice-cold KCl for TBARS (thiobarbituric acid-reactive substances), a marker for lipid per oxidation and protein estimation; in 0.02M EDTA for glutathione estimation; and in phosphate buffer (pH 7.4) for superoxide dismutase (SOD) and catalase estimations using a Teflon tissue homogenizer.10 Decrease in levels of endogenous antioxidants with rise in TBARS levels was considered as oxidative stress.

Statistical analysis: The values are expressed in mean ± SEM. The results were analyzed by using one way analysis of variance (ANOVA) followed by Dunnet’s "t” test to determine the statistical significance between the control and treatment groups. p< 0.05 was chosen as the level of significance. Statistical analysis was performed using Graph Pad Prism Software 5.0 version.

Acute toxicity studies: In this study, chloroform extract at the dose of 2000mg/kg indexed neither visible signs of toxicity nor mortality and observations did not point out any proofs of substance related toxicity. There is no observed adverse-effect level (NOAEL) was noticed at the dose of 2000 mg/kg. The toxicity studies was determined by OECD guidelines 423. Based on the LD50 value, 1/5th and 1/10th (200 & 400 mg/kg) of its value was chosen for pharmacological studies.

The induction of diabetes with streptozotocin increases the blood glucose level significantly (p<0.001) in group II rats as compared to normal rats. In 21 day study glibenclamide the standard drug restored the blood glucose highly significantly with the p<0.001 in 14 days whereas chloroform extract (200 & 400 mg/kg) reduced the glucose level moderately and highly significant with p<0.01 & p<0.001.

DISCUSSION: Any drug that is effective in diabetes will have the ability to control the rise in glucose level by different mechanisms and the ability of the extracts to prevent hyperglycaemia could be determined by hyperglycaemic animal model. In  animals, diabetes  can be  induced  by  partial  pancreatectomy  or  by the administration  diabetogenic  drugs  such  as  streptozotocin, alloxan,  ditizona  and  anti-insulin  serum.  Streptozotocin  is  a naturally  occurring  nitrosourea  product  of  streptomyces achromogenes, and  it  is  widely  used to  induce  diabetes  in rats. A pancreatic mode of action is feasible because in mild diabetes not all the beta cells of the pancreas are destroyed by STZ.  Surviving beta cells retain the capacity to synthesize and secrete insulin. 11, 12 In conclusion, the chloroform extract of Corchorus trilocularis leaves showed a significant anti-diabetic activity in streptozotocin induced diabetic rats. The phytosterols present in chloroform extract may be possibly responsible for the anti-diabetic activity. The antidiabetic effect Corchorus trilocularis may be due to increased release of insulin from the existing β-cells of pancreas (Table 1). Furthermore, there was a significant attenuation of serum LDH and creatine kinase levels with the test drug treatment indicating the cardio protective effect of chloroform extract of Corchorus trilocularis. The treatment showed normal pancreatic β-cells. The protection might have been mediated through a Corchorus trilocularis induced increase in basal pancreatic SOD and catalase activity (Table 2 - 3).

Treatment of diabetic rats with the chloroform extract of Corchorus trilocularis significantly increased the levels of non protein thiols in serum as well as in pancreatic tissues of rats. In present study, it was also observed that the level of blood glutathione significantly (p< .05) increased, as well as pancreatic levels of glutathione in diabetic rats when treated with chloroform extract of Corchorus trilocularis. Further, the activities of SOD and CAT were also increased in the pancreatic tissues of test drug-treated diabetic animals. The antioxidant activity of the test drug might have been due to the inhibition of glycation of the antioxidant enzymes SOD and CAT (Table 3). However,  we  suggest  that  further work should be carried out at cellular and molecular levels to find  out  the  absolute  mechanism  of  action  of  the  plant in experimental  diabetes.  The  present  investigation  has  also opened  avenues  for  further  research  to  the  development  of potent  phytomedicine  for  diabetes  mellitus  from  the Corchorus trilocularis. 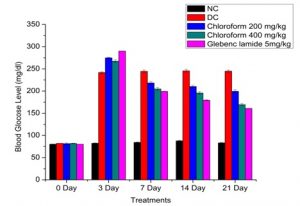 CONCLUSION: In conclusion, chloroform extract of Corchorus trilocularis leaves exhibited antidiabetic effect against diabetes and also ameliorated the oxidative damage in pancreas. The effects may be attributed to presence of antioxidant phytochemical present in Corchorus trilocularis. Further mechanistic studies are required to suggest the appropriate mechanism for the antidiabetic effect of the plant.

ACKNOWLEDGEMENT: The authors are grateful to Dr. A K Tyagi (Director IPS, Group of colleges, Gwalior, India) for his kind help and give permission to use laboratory for this experiment.

CONFLICT OF INTEREST: Authors declare that there is no conflict of interest.