ABSTRACT: Diabetes mellitus or sugar diabetes is a condition that occurs when the body can't use glucose (a type of sugar) normally. It is a chronic disease associated with abnormally high levels of the glucose in the blood because of disturbances in carbohydrates, fat and proteins metabolism and it is due to one of two mechanisms that inadequate production of insulin (which is made by the pancreas and lower blood glucose), or inadequate sensitivity of cells to the action of insulin. This causes glucose levels in the blood to rise, increased urination, extreme thirst and unexplained weight loss. The prominent objective of this work was to find out the anti-diabetic and anti-hyperlipidemic activities of Origanum majorana ethanol leaf extract (100, 200, 400 mg/kg body weight) in Streptozotocin (50 mg/kg b.w) induced diabetic rats. After oral administration of such extract the blood glucose levels were recorded at specific intervals. In consequence it was observe that extract was significantly diminished blood glucose level. Simultaneously the effect of the extract on diabetes induced hyperlipidemia was studied where it markedly decreased the elevated total cholesterol (TC), triglycerides (TG), low density lipoprotein (LDL) and very low density lipoprotein (VLDL) level while increased the high density lipoprotein (HDL). The preliminary phytochemical screening revealed the presences of tannins, glycosides, terpenoids, saponins, flavonoids and alkaloids. The conclusion exhibited that ethanol extract shows antidiabetic activity compared to standard drug glibenclamide (4 mg/kg). The further in-vivo study, isolation of pure phytoconstituents should be investigated to discover the antidiabetic action and other needful effects.

INTRODUCTION: Diabetes is a group of diseases marked by high levels of blood glucose resulting from problems in how insulin is produced, how insulin works, or both. Diabetes affects many parts of the body and is associated with serious complications, such as heart disease, stroke, blindness, kidney failure, and lower-limb amputation 1, 2. As of 2015, an estimated 415 million people had diabetes worldwide, 3 with type 2 DM making up about 90% of the cases 4, 5.

This represents 8.3% of the adult population, with equal rates in both women and men 6. It has been estimated that Indian people are more genetically susceptible to diabetes accounting about 40 million and would reach up to 74 million by 2025 7, 8.

Adverse effect are more in allopathic drugs so herbal materials which are being used as traditional medicine for the treatment of diabetes are considered one of the good sources for discovery of new drugs 11, 12. Origanum majorana or Majorana hortensis is known as Marwa in India, belonging to the mint family (Lamiaceae). Commonly known as Sweet marjoram. Marjoram has many uses with numerous health benefits 13. Digestive benefits (Increasing the efficiency of digestion by increasing digestive enzymes and saliva, improving appetite, relieving nausea, eliminating flatulence, preventing intestinal infections, relieving diarrhea and constipation) 14, 15.

Marjoram is a great antiseptic, antibacterial, antifungal and antiviral agent and used in a variety of common illnesses (food poisoning, staph infection, tetanous infection in wounds, typhoid, malaria, influenza, common cold, mumps, measles) 16. Another benefit of marjoram is the enhancement of the cardiovascular and circulatory system (Lowering the blood pressure, greatly reducing the risk of hypertension, preventing the build up of cholesterol).

The herb contains important phytoconstituents like tannins, glycosides, terpenes, flavonoids, linalool and cavacrol. This study was aimed at investigating the effects of antidiabetic and antihyperlipidemic activities of ethanol leaf extract of the of Origanum majorana   20.

Plant Materials: The leaf of Origanum majorana was collected from the forest region of Bobbili, Vizianagaram (District), Andhra Pradesh, India. And they were identified and authenticated by Dr. Madhava Chetty, Department of Botany, S. V. University, Chittoor District Tirupati and leaves were deposited in the Herbarium of Department of Botany.

Preparation of Plant Extract:  Leaves were washed thoroughly with sterile distilled water in order to remove any dirt or filthy particles present on the surface and were shade dried then made into fine powder. These powdered samples (100g/500 ml) in ethanol for 48 hours at 45 ºC. The Phyto-chemical constituents are extracted by using soxhlet apparatus. The extract was soaked and evaporated under pressure and concentrated at 50°C and the residue obtained was stored at 4 °C. 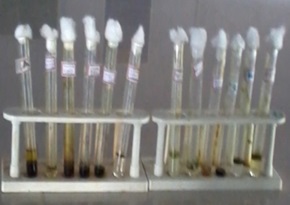 Acute Oral Toxicity Study: Acute oral toxicity studies of ethanol leaf extract of Origanum majorana was carried out as per the guidelines of Organization for Economic Co-operationand Development (OECD) no. 423. As per OECD guidelines minimum number of animals should be used (3 animals per dose) for experiment to obtain the information as acute toxicity of test dose. Overnight fasted rats were orally fed with plant extract at a dose level of 250, 500, 1000 and 2000 mg/kg body weight respectively. The animals were observed continuously for 2 hrs to investigate any sign of toxicity, occasionally for 4 hrs for their general behavior and after a period of 24 hrs, animals were observed for any sign of mortality till 7 days 23, 24.

Induction of Diabetes Experimentally: Wistar rats (160 - 200 gm) were fasted for 18 hours before the induction of diabetes with streptozotocin (STZ), for induction of type-1 diabetes mellitus. Animals (n=36) were injected intraperitoneal with 0.22 - 0.25ml of freshly prepared solution of STZ (50 mg/ml in 0.01 m citrate buffer, pH 4.5) at a final dose of 50 mg/kg body wt. The diabetic state was assessed in STZ-treated rats by measuring the non-fasting serum glucose concentration after 72 hours. Only rats with serum glucose levels greater than 200 - 250 mg/dl were selected and used in this experiment.

Statistical Analysis: Results of estimation of biochemical and functional parameters have been reported as mean value ± SEM. The variation in a set of data has been estimated by performing one way analysis of variance (ANOVA). Individual comparisons of group mean values were done using Dunnet’s test (Sigma start 3.5). P values <0.05, were considered statistically significant.

Preliminary Phytochemical Screening: From qualitative tests it was identified the presence of many phytoconstituents such as tannins, alkaloids, saponins, flavonoids, terpenoids, and phenols from Origanum majorana ethanol leaf extract.

Values are expressed as mean ± SEM (Number of animals, n=6); significantly different at *P<0.05, when compared with diabetic control group 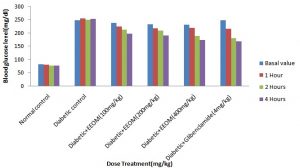 Effect of Ethanolic Extract on Biochemical Parameters in Streptozotocin-induced Diabetic Rats: The effect of different doses of the ethanolic extract on diabetes induced hyperlipidemia was also evaluated. It was observed that due to diabetes there was an increase in the total cholesterol levels as well as triglyceride levels. The HDL levels were reduced in the diabetic animals and the LDL levels were increased significantly (Table 5). The ethanol extract showed a significant decrease in the total cholesterol levels and triglyceride levels. It also increased the HDL level and was successfully it suppressing the LDL and VLDL levels as compared to the standard drug (Table 5). 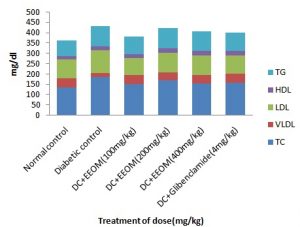 DISCUSSION: In these above study animals were observed for any sign of mortality till 7 days. The acute toxicity study of ethanol extract of Origanum majorana on laboratory animals showed that no lethality up to the dose of 2000 mg/kg body weight. As a result, three doses of 100 mg/kg, 200 mg/kg and 400 mg/kg b.w were taken as effective dose for the study. After 21days treatment, blood from all the groups was collected from tail vein puncture for estimating blood glucose levels. In Glucose tolerance test, the glucose levels were estimated before drug treatment and at different intervals thereafter. In the normal control group the blood glucose was found to increase linearly from fasting blood glucose value of 77.5 ± 0.63 mg/dl to 80.5 ± 0.59 mg/dl in the first 30 minutes. After 60 minutes of glucose loading, the blood glucose was increased. The maximum value of 110.39 ± 0.66 mg/dl was seen at the 60th minute. Whereas in the extract treated animals, only a little elevation in the blood glucose were seen and maximum glucose tolerance was observed at 60th minute.

The extract was evaluated for in-vivo hypoglycemic activity using streptozotocin at a dose of 50mg/kg. it was observed that there was a short phase of hypoglycemia followed by marked elevation in the blood glucose level, the diabetic rats with fasting blood glucose levels > 200 mg/dl, were selected for further studies.

The beneficial effect of Origanum majorana and glibenclamide given immediately after diagnosis of diabetes which decreases serum total cholesterol, serum total triglycerides, LDL and VLDL levels and increases serum insulin and HDL levels was observed after 21 days treatment. Hence, the results indicate that treatment of diabetic rats with Origanum majorana may prevented the complications arises by diabetes.

ACKNOWLEDGEMENT: The authors are thankful to Dr. Madhava Chetty, Department of Botany, S.V. University, Chittoor District Tirupati, for his contribution towards collection of plant material and authentication of plant material. The authors wish to thanks St. Mary’s Pharmacy College and Nalla Narasimha Reddy Education Society’s Group of Institution, Hyderabad for providing all the facilities and sufficient time given for the research work to be carried out.