INTRODUCTION: In recent years, there is an alarming rise in chronic disease and is raising huge global concern on their increased prevalence and threats to the health and economic growth of individuals. Diabetes mellitus (DM) is one such prevalent and common chronic disorder characterized by an abnormal rise in blood glucose levels.

It also induces as well as alterations in protein and lipid metabolism due to the inability of the pancreas to produce sufficient insulin and/or as a result of the body’s inability to effectively utilize the insulin it produces 1, 2. The rate of increase of DM prevalence is quite alarming. It is estimated that approximately 420 million people are suffering from DM in 2014. It is envisaged that this figure will rise to over 650 million by the year 2040 3, 4.

Moreover, DM is associated with several other complications like diabetic angiopathy, neuropathy, retinopathy, cardiovascular diseases, kidney failure, and leg amputation 5, 6, making life miserable for people suffering from DM. The current therapeutic approaches towards DM were concentrated on reducing the blood glucose levels with oral hypoglycemic drugs or by insulin shots as these drugs cause the patients to suffer from several side effects and require a search of alternative therapies which are readily available and with little or no side effects are becoming the primary focus for the treatment and management of DM 7.

The liver is the major metabolizing organ in the body and is responsible for the detoxification of xenobiotics. However, several conditions like alcohol consumption cause hepatitis, liver cirrhosis, hepatocellular carcinoma, and other infections make the liver vulnerable 8, 9 and reduces it’s potential in metabolism and detoxification. Among these, alcohol consumption is an age-old practice to mankind and is a common cause for ROS-mediated damage to the liver 10, 11. The alcoholic liver disease continues to be one of the most serious liver disorders throughout the world. The liver disease seen in alcoholics encompasses three main related entities: steatosis, alcoholic hepatitis, and cirrhosis. Steatosis (fatty liver) is the initial histological manifestation of alcoholic liver diseases and is found in 70-100% of all patients taking excessive amounts of alcohol 12. Herbal drugs play a crucial role in the regeneration of liver cells, accelerating the healing process and hence managing various liver disorders 13.

Medicinal plants are widely used for the treatment of several alignments for ages. In the form of extracts, infusions, syrups, decoctions, these medicinal plants are part of traditional medicine in countries like India, China, Egypt and several countries, thus playing a pivotal role in the development of mankind all around the world. Several compounds isolated from these plants have been shown to have a wide spectrum of biological activities. Plants belonging to Anisomeles genus belonging to the Lamiaceae family are aromatic herbs, and inhabit sunny, rocky areas with arid climates throughout Australia and Asia. Three Anisomeles species, namely Anisomeles malabarica, Anisomeles indica and Anisomeles heyneanaare indigenous to India. Anisomeles malabarica, the Malabar catmint, is an aromatic perineal herb widely distributed throughout the tropical and southern regions of India. It is commonly called as ‘Kalpanath’ in India and is a part of folk medicine. It is useful in hysteria, amentia, dyspepsia, epilepsy, anorexia, diarrhoea, gout, intermittent fevers, and fever arising from teething; the plant has been investigated for several pharmacological activities. However, there a very little or no pharmacological studies that have reported on hepatoprotective and anti-diabetic activities of the roots of this herb. Hence, in the current study, we have performed studies to evaluate hepatoprotective and anti-diabetic activities of aqueous and alcoholic extracts of Anisomeles malabarica roots in rat models of hepatotoxicity and diabetes.

Plant Collection and Processing: Anisomeles malabarica plants were collected from the forest area of Tirupati, Chittoor district, Andhra Pradesh, India in the month of June-July. The identity of the plant material was verified by Dr. K Madhava Chetty, Asst. Prof., Dept. of Botany, Sri Venkateshwara University Tirupati, with voucher specimen number 1891, was deposited at the Institute level. Roots of the collected plants were washed thoroughly with tap water to remove mud, surface dust, and other unwanted materials. The roots are then allowed to dry for 20 to 30 days under shade. The dried roots are then finely powdered. The powdered root material was sieved and was used for the subsequent extraction process.

Extraction Procedure: Aqueous extract was prepared by taking 100 g of the powdered root material in a round bottom flask with 250 mL of distilled water and was subjected to under reflux conditions for 3 h. and were further allowed to soak in water for 3 days for complete extraction 14, 15. Ethanolic extracts were prepared by extracting 100 g of powdered sample with 250 mL of ethanol under soxhlation 15. Both the extracts were collected and concentrated under reduced pressure at 45 °C using a rotary flash evaporator, following which the extracts were lyophilized to obtain crude extracts 16.

Experimental Animals: Male albino wistar rats weighing 180-200 g and 3 to 4 months of age were selected for use for the study. Animals were procured from the National Institute of Nutrition, Hyderabad, Telangana, maintained under standard laboratory conditions (22 ± 2 °C, light: dark cycle of 12:12 h), and were provided with normal pellet diet and water 17. All the experimental studies were performed as per CPCSEA guidelines, and prior approval for the study was obtained from the institutional animal ethical committee. (IAEC Approval No.516/PO/c/01/IAEC/06).

Acute Oral Toxicity Studies of the Prepared Extracts: The acute oral toxicity test of the aqueous and alcoholic extracts was done based on the limit and main test recommendations of OECD No 423 Guidelines. Rats were fasted overnight and were administered with the plant extracts as per the procedure and observed for mortality for 24 h 18, 19.

Induction of Diabetes in Experimental Animals: Animals were kept for fasting for 16 to 18 h, after which animals induced with diabetes by a single intraperitoneal injection of streptozotocin (STZ) dissolved in freshly prepared citrate buffer (pH 4.5) at a dose of 45 mg/kg body weight. After 30 min, animals were allowed to have free access to water and food. However, after 5 to 6 h of induction, animals were allowed to have access to sucrose water to prevent hypoglycaemic shock. Seven days after administration, animals were checked for induction of diabetes by measuring the blood glucose levels; animals with blood glucose levels of above 300 mg/dL were considered as diabetic and are used for the study 20, 21.

Statistical Analysis: All the data were expressed as mean ± standard deviation. Data obtained were subjected to one-way ANOVA followed by the turkey's post hoc test to determine the level of significance at P < 0.05.

In the current study A. malabarica root extracts were investigated for their hypoglycemic effects on STZ induced diabetic rats and for hepatoprotective effects against alcohol-induced hepatotoxicity in order to examine the viability of their usage in Turkish folk medicine. Primarily the acute toxicity studies revealed the non-toxic nature of the aqueous extract of A. malabarica root.

There was no lethality or any toxic reactions found at any of the doses selected until the study period. A total of 100 g of dried roots powder of A. malabarica was processed separately for aqueous and ethanolic extraction and at the end of the extraction process, it was found that the percentage yield was 16.48 % and 20.36 % w/w, respectively.

Acute Oral Toxicity Studies: The acute oral toxicity study revealed that oral dose of a maximum 2000 mg/kg of both the aqueous and ethanolic extracts of A. malabarica root showed no treatment-related signs of toxicity or mortality

Hypoglycemic Activity of the Extracts In Normoglycemic Rats: The effects of aqueous and alcoholic extracts of A. malabarica root on normoglycemic rats were given in Table 1. The results indicate that oral administration of these extracts in graded doses of 100, 200, and 400 mg/kg in experimental animals has a significant effect on the blood glucose levels.

It has been observed that, in normoglycemic rats, the mean percentage glucose reduction was found to be high for all treatment groups at 6 h of administration of the single dose of extracts in all the treatment groups. However, this was more prominent in Group VIII (400 mg/kg, alcoholic extract), which showed a percentage reduction of 30.31%, whereas Group-II (40 mg/kg, tolbutamide) with 35.12% of BGL reduction in comparison to baseline glucose levels.

Hypoglycemic Activity of the Extracts STZ Induced Diabetic Rats: The effects of aqueous and alcoholic extracts of A. malabarica root on hyperglycemic rats were given in Table 2. It was observed that the maximum glucose reduction occurred at 6 h post-administration of a single dose of extracts.

These results show the possible existence of a dose-dependent decrease in BGL in normoglycemic and hyperglycemic rats. These results can be due to the improved utilization of external glucose load by the extracts in a mechanism that is similar to the reference standard drug Tolbutamide, a sulfonylurea. Compounds belong to sulfonylureas, act by stimulating pancreatic beta-cell to produce more insulin and thereby, improving glucose uptake. In STZ induced diabetic animals, STZ causes permanent damage to pancreatic beta cells, this may result in reduced decrease in the percentage decrease in BGLs. However, we have observed a decrease in hyperglycemic animals also, which indicates the possibility of existence of other mechanisms that can lead to reduction in BGLs.

Hepatoprotective Activity: Excessive consumption of alcohol can lead to liver dysfunction and alcoholic liver disease (ALD), this leads to liver injury. It is proved that AST, AST, ALP, and bilirubin can be expressed in the liver and that abnormal up regulation of these enzymes would cause damage and necrosis of hepatic cells 22. Assessment of liver injury can be performed by measuring the serum ALT, AST, ALP and LDH. An increase in these parameters indicates liver injury 23. Several studies revealed that oral administration of alcohols to rats can induce hepatic injury with an increased level of serum ALT, AST, ALP, and bilirubin in the serum 24, 25. In the present work, we have assessed hepatoprotective activities on the extracts on the administration of ethanol to rats by measuring the serum ALT, AST, ALP, LDH and bilirubin levels at the end of the study.

TABLES 1: EFFECT OFAQUEOUS AND ALCOHOLIC EXTRACTS OF A. MALABARICA ROOTS ON NORMAL RATS

TABLES 2: EFFECT OF AQUEOUS AND ALCOHOLIC EXTRACTS OF A. MALABARICA ROOTS ON STZ INDUCED HYPERGLYCEMIC RATS.

Such rise in hepatoxicity markers was found to normalize in Group 3, Silymarin (100 mg/kg) treated group, with values of 59.14 ±1.91 U/L, 91.58 ± 0.95 U/L, 133.28 ± 1.32 U/L, and 0.59 ± 0.04 mg/dL respectively for ALP, ALT, AST, and bilirubin. In treatment groups with 100, 200 & 400 mg/kg of aqueous and alcoholic root extracts of A. Malabarica, it was observed that all the extracts showed a significant reduction in hepatoxicity markers when compared to Group-2 alcohol control. However, alcoholic root extract at 400 mg/mL showed results similar to the standard silymarin treated group with no significant difference. Similar effects were observed with liver weights and liver volumes in the experimental animals. 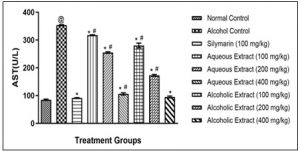 CONCLUSION: Alcoholic extracts of A. malabarica root, showed significant hypoglycemic, antihyperglycemic, and hepatoprotective activities, which supports its use in traditional medicine. However, a detailed investigation of phytochemical constituents is very much essential to identify the active components in the extract, responsible for the activity and to isolate them.