ABSTRACT: A study was undertaken to fractionate and characterize the antidiabetic potential of Cyperus pangorei rhizomes. The column chromatography and HPTLC study was performed on ethyl acetate fraction and five sub-fractions were separated and subjected for the evaluation of antidiabetic potential in streptozotocin induced diabetic rats.  The experimental data indicated that the ethyl acetate sub-fractions SF4 (26.39%) (P < 0.05) and SF5 (43.69%) (P < 0.05) at the dose of 50mg/kg BW produced the maximum fall in the blood glucose level of diabetic rats after 15 days of treatment. Elevated levels of triglycerides (TG), total cholesterol (TC), low density lipoprotein (LDL), very low density lipoprotein (VLDL) and decrease level of high density lipoprotein (HDL) and serum insulin level were observed in Streptozotocin-induced diabetic rats. While significant differences were observed in serum insulin level and serum lipid profiles in sub fractions treated diabetic animals, when compared with the diabetic control and normal animals (P < 0.01). In sub fractions SF4 and SF5 treated group decreased level of serum TG, TC, LDL and VLDL and increased serum insulin and HDL level has been observed. Histopathological observations revealed that SF4 and SF5 are non-toxic and restored the normal histoarchitecture of pancreatic cells. SF4 and SF5 offer a promising therapeutic value in prevention of diabetes. Further studies will be needed in future to isolate the active principles as well as identify the possible mechanism of active principle with its structural characterization.

INTRODUCTION: Ancient Indian physicians termed diabetes mellitus as “Madumeha” (honey urine), and it has been treated orally with several medicinal plants or their extracts based on folk medicine 1.

Now a days, “Scientists and Researchers” are very much interested on research of natural plant products all over the world and a large number of substantiation have shown the immense potential of medicinal plants used traditionally 2.

Plant drugs are frequently considered to be less toxic and free from side effects than synthetic ones 3. According to the World Health Organization, more than 70% of the world’s population must use traditional medicine to satisfy their principal health needs 4.

Cyperus pangorei Rottb. (Family: Cyperaceae) Cyperus pangorei is smooth rust-like sedge growing in tropics of India as a common weed in the vicinity of water, up to an elevation of 2000 meter and used in south India for mat making 5. Its rhizomes have been used to promote hair growth, anti perspirent, and deodorant and used for treatment of skin disorder and eye diseases, stomachic, demulcent, antiemetic, useful in chronic diarrhea with mucus and blood and dysentery 6. Anti-microbial, Diuretic, Anthelmintic, activity of rhizomes of this plant have been reported by several researchers 7.

Collection of plant material: Dried rhizomes of Cyperus pangorei were collected from local market of Indore, Madhya Pradesh, India and authentified by Institutional Department. A voucher specimen is retained in Institute Department for further reference.

Extraction and fractionation8, 9: The powdered rhizomes (100g) were exhaustively extracted in a Soxhlet apparatus with ethanol (3×1000ml). Obtained crude extract was concentrated to dryness under reduce pressure at 40oC. Collected dried residue was dispersed in water at room temperature, filtered and extracted by partition, petroleum ether (2×500mL) and chloroform (2×500mL) and then with ethyl acetate (2×500mL). The solvents were evaporated under vacuum to give the petroleum ether (14.35% g), the chloroform (12.05%) and the ethyl acetate (27.41 %) fractions. Ethanolic extracts obtained from Cyperus pangorei was subjected to various qualitative tests for the identification of various plant constituents present in this species.

Acute Toxicity Study 10: Normal healthy mice were starved overnight and divided in to two groups (n=6). Then the fixed dose 500 mg/kg of ethyl acetate (EtoAc) sub-fraction (SF1 to SF5) was given orally to identify a dose producing evident toxicity. The rats were observed continuously for 2 h for behavioral, neurological, and autonomic profiles and after 24 and 72 h for any lethality.

Induction of non-insulin-dependent diabetes mellitus (NIDDM): NIDDM 12 was induced in overnight fasted adult male Wistar albino rats weighing 150–200 g by a single intraperitoneal injection of 60 mg/kg Streptozotocin (Loba Chemie). Hyperglycemia was confirmed by the elevated glucose levels determined at 72 h. Animals with blood glucose level more than 150 mg/dl were considered as diabetic. Rats found with permanent NIDDM were used for the antidiabetic study. This model has been used in earlier studies to induce type II diabetes in rats 13, 14. Glibenclamide (2.5 mg/kg) was used as the standard drug.

Experimental Design: By considering the result obtained in OGTT we have selected two sub-fractions (SF4 and SF5) for the evaluation of antidiabetic potential. Animals were divided into seven groups, each consisting of six rats.

Treatment was continued for 15 consecutive days. The fasting blood glucose levels were estimated on days 0, 5, 10 and 15 day.

Estimation of Biochemical Parameters: On day 15, blood was collected from retro-orbital plexus of the overnight fasted rats under light ether anesthesia and kept aside for ½h for clotting. Serum was separated by centrifuging the sample at 6000 rpm for 20 min. The serum was analyzed for estimation of Triglycerides (TG), Total Cholesterol (TC), HDL cholesterol (HDLC), LDL, VLDL by enzymatic methods using commercially available kits by using auto-analyzer 15 and Serum insulin level was estimated by using RIA technique.

Histopathological Studies: Pancreatic tissues from all groups were subjected to histopathological studies. The whole pancreas from each animal was removed after sacrificing the animal under anesthesia and was collected in 10% formalin solution and immediately processed by the paraffin technique. Sections of 5 μm thickness were cut and stained by hematoxylin and eosin (H and E) for histological examination.

Chromatographic Studies: In order to identify the total number of phytoconstituents present in ethyl acetate fraction, TLC was performed using the solvent system Ethyl acetate: Chloroform (60:40) and the results showed that total 5 spots were highlighted in TLC plate. For better resolution of TLC profile, HPTLC studies was performed in CAMAG Linomat 5 instrument by using the same solvent system and the results showed that same spots were scan at 366nm with respective Rf values (Figure 1). 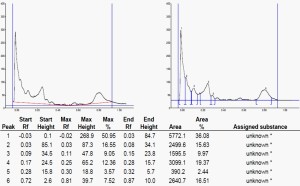 Acute Toxicity Studies: Experimental rats treated with sub fractions (SF1 to SF6) showed no discernible behavioral changes up to 500 mg/kg by oral route. No mortality was observed at this dose during 72 h observation period.

Oral Glucose Tolerance Test: The results of OGTT, as presented in Table 1, showed no statistically significant difference of the plasma glucose levels (at −30) among all groups. The oral administration of the glucose load at 2 g/kg in the normal produced a rapid increase in their plasma glucose. In the standard drug treated experimental rats, glibenclamide reduced their plasma glucose level from 30 to 120 minutes, whereas the sub fractions showed only a slight but not significant hypoglycemic activity when compared with control group at the same time. The sub fractions SF4 and SF5 at dose level 50g/kg could seemingly reduce the plasma glucose level better than SF1, SF2 and SF3 at 120 minutes after the glucose load (Table 1).

Antidiabetic activity screening in streptozotocin induced diabetic rats: The antidiabetic effects of various sub fractions of Cyperus pangorei on the fasting blood sugar level of normal and diabetic rats are is shown in Table 2.

In normal animals, significant (P<0.05, P<0.01) reduction in the blood glucose level was observed by the SF5 as compared to the normal control. However, treatment of SF5 could not bring significantly back the sugar to normal levels.

Elevated levels of triglycerides (TG), total cholesterol (TC), low density lipoprotein (LDL), very low density lipoprotein (VLDL) and decrease level of high density lipoprotein (HDL) were observed in Streptozotocin-induced diabetic rats which might be due to excess mobilization of fat from the adipose tissue because of underutilization of glucose 17, 18. The treatment SF4 and SF5 decreased the serum TG, TC, LDL and VLDL and increased the HDL level significantly shown in Table 4. The observed effect may be because of decreased cholesterogenesis and fatty acid synthesis. Significant lowering of total cholesterol and raise in HDL cholesterol is a very desirable biochemical state for prevention of atherosclerosis and ischemic conditions 19. Various studies on medicinal plants had reported a similar lipid lowering activity.

Induction of diabetes with STZ is associated with the characteristic loss of body weight, which is due to increased muscle wasting and due to loss of tissue proteins 20. Since diabetes causes significant reduction in weight, therefore the parameter of change in body weight becomes an important parameter to study the effects of ethyl acetate sub-fraction. The treatment with SF4 and SF5 showed an increase in body weight as compared to the diabetic control, which may be due to its protective effect in controlling muscle wasting i.e. reversal of gluconeogenesis and may also be due to the improvement in insulin secretion and glycaemia control 21. The results are shown in Table 5.

Histopathological studies: Streptozotocin destroys pancreas partially 22, 23. In the diabetic group, degeneration and necrosis of the islets were observed. Sections of pancreatic tissue showed normal acini and normal cellular population in the islets of pancreas in normal rats (Photograph 2). Extensive damage and reduced dimensions in the islets were seen in diabetic rats (Photograph 3) Restoration of normal cellular population size and reduction in adipose tissue was shown in Glibenclamide treated rats (Photograph 4). A significant change in the beta cells of pancreas was seen in group treated with SF4 as shown in (Photograph 5). Pancreas treated with SF5 also showed reduction in adipose tissue and intact cells of islets of langerhans (Photograph 6). 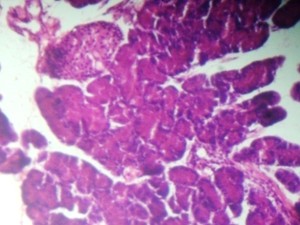 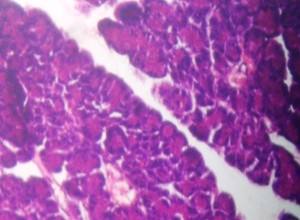 PHOTOGRAPH 3: PHOTOMICROGRAPH OF PANCREAS OF RATS OF DIABETIC CONTROL GROUP 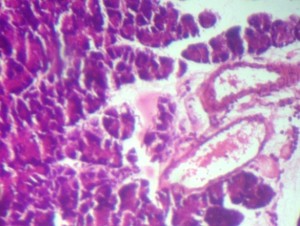 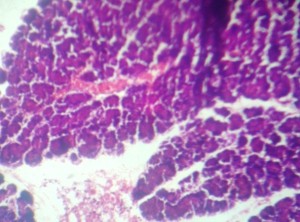 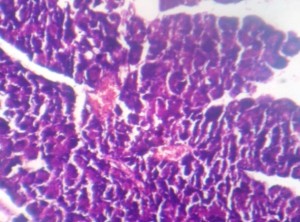 CONCLUSION: In conclusion, Cyperus pangorei sub fractions SF4 and SF5 exhibited significant antihyperglycemic activities in streptozotocin-induced diabetic rats. Thus SF4 and SF5 offer a promising therapeutic value in prevention of diabetes. Sub fractions SF4 and SF5 showed improvement in lipid profile as well as regeneration of β-cell of pancreas and so might be of value in treatment of diabetes. Further studies will be needed in future to isolate the active principles as well as identify the possible mechanism of active principle with its structural characterization.