It is much branched small herb and 30 to 75 cm in height. All of tulsi parts are used in medicine, especially fresh and dried leaves. Leaves are oblong, acute with entire or serrate margin, pubescent on both sides and minutely gland-dotted. The leaves are green in colour with aromatic flavour and slightly pungent taste. Flowers are purplish in colour in the form of racemes. Nutlets are subglobose, slightly compressed, pale brown or red in colour. Seeds are reddish black and subglobose 2.

Diarrhoea is associated with an increased frequency of bowel movements with the production of soft or watery stools. It may be defined as the passage of more than 300ml of liquid faeces in 24 hours. This results in fluid and electrolytes loss that may lead ultimately to death, particularly in children 1. Pain, urgency, perianal discomfort and incontinenence often accompany it. Low-volume, painful, bloody diarrhea is known as dysentery 3.

Since stool weight is largely determined by stool, most cases of diarrhoea result from disorders of intestinal water and electrolyte transport. From a mechanisteic perspective, diarrhoea can be caused by an increased osmotic load within the intestine (resulting in retention of water with in the lumen) excessive secretion of electrolytes and water into the intestinal lumen; exudation of protein and fluid from the mucosa, and altered intestinal motility, resulting in rapid transit. In most instances simultaneous effects of multiple processes are, leading to a net increase in stool volume and weight accompanied by changes in percent water content 4.

Diarrhoea may be due to a specific disease of the intestine or secondary to a disease outside the intestines. For instance, bacillary dysentery directly affects the gut, while diabetes mellitus causes a neuropathic diarrhoeal episode. Diarrhoea can be divided in to acute or chronic forms. Infectious diarrhea is often acute; diabetic diarrhoea has the pathophysiologic causes that help in the identification of specific treatments 5.

From the literature it was found that Ocimum sanctum has also been traditionally indicated for treatment of diarrhoea. Hence leaf extracts of this plant was selected for the study of anti-diarrhoeal activity in castor oil induced diarrhoea in experimental rats.

Plant material: Leaves of Ocimum sanctum collected in the month of February and were identified by Mr. K.  Saravanan, Asso. Prof. and Head, Dept. of Pharmacognosy, Sanjay College of Pharmacy, Mathura and dried in shade at room temperature then subjected to size reduction to a fine powder with the help of mixer grinder.

Albino rats (Wistar strain) of either sex weighing between 150-200 g and Albino mice 16-25g were used for the study. The animals were acclimatized for 7 days under standard husbandry condition. i.e.

The animals were fed with a synthetic standard diet from Amrut Laboratories & Pranav Agro Industries Ltd. Sangli. Water was allowed ad libitum under strict hygienic conditions. All animal studies were performed in accordance to guidelines No. 425 of CPCSEA and Institutional Animal Ethical Committee (IAEC) of Sanjay College of Pharmacy, Mathura, Uttar Pradesh (India). CPCSEA registration number was 1334/01/10/CPCSEA and all the procedures were followed as per rules and regulations.

The leaves powder was packed in a soxhlet apparatus and extracted with 95% alcohol for 18 h. Appearance of colourless solvent in the siphon tube was taken as the termination of extraction. The extract was then transferred into the previously weighed empty beaker and evaporated to a thick paste on the water bath, maintained at 50oC to get alcoholic extract. The extract was finally air dried thoroughly to remove all traces of the solvent and the percentage yield was calculated 6.

About 100 g of powder was taken in a round bottom flask (2000 ml) and macerated with 500 ml of distilled water with 10 ml of chloroform (preservative) for 7 days with occasional shaking for every hour in a closed vessel. Then the marc was removed by filtering the extract and then it was concentrated on a water bath maintained at 50oC 6. These two extracts were stored in airtight containers in a refrigerator below 10oC. The two extracts were examined for their colour and consistency. Their percentage yield was calculated with reference to air-dried powder sample used for the extraction.

The acute toxicity of O. sanctum was determined by using albino mice of either sex (16-20 g), maintained under standard husbandry conditions. The animals were fasted for 3h prior to the experiment and were administered with single dose of individual extracts of O. sanctum and observed for the mortality up to 48 h study period (Short term toxicity). Based on the short-term toxicity profile, the next dose of the individual extracts was determined as per OECD guidelines No. 425. From the LD50 doses 1/20,1/10 and 1/5 doses were selected and considered as low, medium and high dose respectively 7.

In the present study albino rats of either sex weighing 150-200 g were used. They were divided into 9 groups of each containing six animals. They were fasted for 18-24 hrs prior to the test with free access to water.

The percentage protection was calculated by the following formula:

All the recorded results are expressed as mean ± SEM from 6 animals. Statistical difference in mean was analyzed by using one-way ANOVA (analysis of variance) followed by Post hoc test (Dunnett’s ‘t’ test). P< 0.05*, 0.01** and 0.001*** were considered as statistically significant. 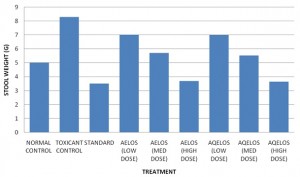 It is well known that ricinoleic acid an active component of castor oil induces changes in mucous permeability, electrolyte transport and intestinal peristalsis leading to hyper secretion of the intestinal mucosa, leading to prostaglandins release which causes an increase in net secretion of water and electrolytes in to the small intestine. Ricinoleic acid causes irritation and inflammation gastric mucosa. The mechanism has been associated with dual effects on gastro intestinal motility as well as on water and electrolyte transport.

PGE2 also inhibits the absorbtion of water and electrolytes. The presence of flavonoids and tannins already reported for their antidiarrhoeal activity has been proven in this experiment. The antidiarrhoeal activity of flavonoids has been ascribed to their ability to intestinal motility and hydroelectric secretion which is known to be altered in intestinal condition. In-vitro and in-vivo experiments shown the flavonoids are able to inhibit intestinal secretary response induced by prostaglandin E2 10.

DISCUSSION: The leaf extracts of Ocimum sanctum have been reported to possess anti tussive, hypoglycemic, antioxidant, antistress, antiulcer, anti-inflammatory, antiasthmatic, immune stimulatory  and neuroprotective effects and for regulation of thyroid function. During acute toxicity studies the extracts (alcoholic and aqueous) of O.sanctum were found non toxic and they did not induced any toxic effect / or mortality even up to the dose level of 2000 mg/kg. Phytochemical studies with these leaf extracts revealed the presence of sterols, flavonoids and triterpenes in both the extracts 11, 12.

Diarrhoea is one of the leading causes of death in developing countries. The inhibition of experimental diarrhoea and the reduction in faecal output by a substance are the basis of the pharmacological evaluation of a potential antidiarrhoeal agent. Many antidiarrhoeals act by reducing the gastrointestinal motility and or the secretions. It is well known that ricinoleic acid, an active component of castor oil, induces changes in mucosal permeability, electrolyte transport and intestinal peristalsis, leading to hyper secretory response and diarrhoea. Ricinoleic acid causes irritation and inflammation of the intestinal mucosa, leading to prostaglandin release, which causes an increase in the net secretion of water and electrolytes into the small intestine. Inhibitors of prostaglandin biosynthesis delay castor oil induced diarrhoea. It has been shown that PG-E type causes diarrhoea in experimental animals as well as in human beings. The mechanism has been associated with duel effects on gastrointestinal motility as well as on water and electrolyte transport.  PG-E 2 also inhibits the absorption of glucose, a major stimulus to the intestinal absorption of water and electrolytes.

The leaf extract contains sterols, flavanoids and triterpenes which may be able to have contribution to the anti diarrhoeal activity. Further research needed to identify the specific constituents responsible for this activity and it may lead to a new hope against this world wide problem.