INTRODUCTION: Traditional folk medicine usually involves a variety of indigenous plants and herbs for particular illnesses.  Palakkad (South India); has a rich cultural background complimented with a diverse range of flora. Traditional folk medicine therefore is a common practice in rural areas for people seeking remedy from Vaidyars (folk medicine man) for treatment of various illnesses such as toothache, fever, stomach ache, cramps and the like. This has been the basis for the discovery of bioactive compounds that are now being used as prescription drugs. Inflammation is considered as a primary physiologic defence mechanism that helps body to protect itself against infection, burn, toxic chemicals, allergens or other noxious stimuli. An uncontrolled and persistent inflammation may act as an etiologic factor for many of these chronic illnesses 1.

Capparis grandiflora is a climbing shrub with spreading branches found mainly in the adjacent regions of Coimbatore, Nilgiry and Tiruchirappalli; in South India 2, 3.Communication with the traditional practitioners have revealed the use of the leaf juice as a stomachic, diuretic , anti rheumatic, shortness of breath and anti tumour. Capparis species have been reported to have anthelmintic, antimicrobial and anti inflammatory activities 4, 5.

The juice is collected and applied externally on affected parts by the folklore. Modern phytochemical screening has shown the presence of fatty acids, flavonoids, glycosides, terpenes and alkaloids in its leaves 6-9. Currently used synthetic anti-inflammatory agents cause side effects like gastric irritation and ulcer induction10. Hence there is a need to discover some suitable alternatives for the synthetic drugs. The current study is an attempt in evaluating the potency of Capparis grandifloraleaves towards inflammatory diseases.

Plant material: The fresh leaves of Capparis grandiflora (Capparidaceae), collected at the flowering stage  in the month of March 2010 from the tribal areas of Palakkad district, Kerala state, South India were authenticated by the Botanical survey of India, Combatore,Tamilnadu (BSI). A voucher specimen no. (BSI/SRC/5/23/10-11/Tech-565) is deposited in the departmental herbarium. Leaves were dried in shade for 20 days and then powdered to get a coarse powder. This powder was stored in air tight container and used for further successive extraction.

Preparation of Crude extract: The dried and powdered plant material was   successively extracted with petroleum ether, chloroform and ethanol using a soxhlet apparatus. The extraction was carried out for 24 h at room temperature with mild shaking 11. The extracts were filtered and concentrated at 45°C, and the weight of each residue was recorded and percent yield was calculated.

Experimental design: The anti-inflammatory activity of various extracts of  Capparis grandiflora leaves was assessed in acute and sub-acute inflammation 12.

Carrageenan induced hind paw oedema (Acute inflammation): For evaluation of acute inflammation, this model employed measurement of oedema volume by using an instrument plethysmograph. The animals were starved overnight previous to dosing. The first group served as control and animals were administered with 5 % gum acacia, group II to group X animals received petroleum ether, ethanol and chloroform extracts (200 mg/kg) p.o respectively. Group XI was standard and animals were treated with indomethacin (10 mg/kg). The phlogestic agent carrageenan was prepared by suspending the drug (1%) into the normal saline vehicle and acute inflammation was produced by administration of 0.1 ml of the above suspension to all the animals of each five groups, through injection into the right hind paw at the sub plantar region. A mark was made at the region of the malleolus of the paw and the paw was immediately immersed in the Plethysmometer, up to the mark, and the paw volume was measured, serves as reading for 0 min. The readings were taken similarly and paw volumes were measured for 15, 30, 60, 120 and 180 min respectively. The average paw swelling in the groups of the test animals of different solvent extracts treated were compared with control group which is treated with vehicle and standard group animals those have received indomethacin. Mean increase in paw volume was determined and tabulated in table 1 13.

Formaldehyde-induced hind paw oedema (sub acute inflammation):Animals were fasted for 18 hr and then divided to six groups (n=6). 5ml of distilled water was given to each animal for uniform hydration prior to experiment. Pedal inflammation was developed by injecting 0.1ml of 4% formaldehyde solution in water below the plantar aponeurosis of hind paw of the rats. The paw volume was recorded prior (0 hr) and then at 1, 2, 3 and 4 hours after formaldehyde injection and tabulated in table 2 14. Vehicle (1ml/kg, p.o.), alcoholic, chloroform and petroleum ether extracts (200mg/kg) and Diclofenac (20mg/kg), were administered 1 hr prior to formaldehyde injection.

Acute toxicity study:No visible change was observed in any animal and all survived till 24 hr; thus based on preliminary study, different extracts of C.grandiflora were found to be safe for further biological studies, as no lethality was observed at 1000 mg/kg (orally) in mice.

Carrageenan induced hind paw oedema: As shown in table 1; the alcoholic and petroleum ether extracts showed a significant (p<0.05) and dose dependent inhibition in inflammation induced by phlogestic agent. The maximum % inhibition was 60.9% and 57.1% by alcoholic and petroleum ether extracts respectively at 3rd hr. However standard drug (Indomethacin 10mg/kg) showed highly significant inhibition at the same time in comparison of extracts (p<0.01) with the maximum percentage inhibition (65.4 %). 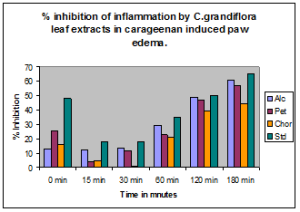 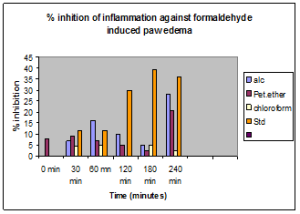 CONCLUSION: The present study indicates the importance of alcoholic and petroleum ether extracts of leaves of C .grandiflora in relation to the anti-inflammatory activity. Both alcoholic and petroleum ether extracts showed significant inhibition of inflammation induced by various stimuli with a long lasting effect. Further studies must be conducted in order to clarify the exact mechanism of anti-inflammatory activity and to isolate constituents of the extract responsible for this activity.

ACKNOWLEDGEMENT: The authors are grateful to the staff of Forest Department, Attapady, South India for their kind help during field visits and the tribal people who shared their traditional knowledge regarding medicinal plants during our field visits.