Conclusion: Our study suggests that losartan could be a potential candidate for treatment of RA. It is therefore recommended that studies using different doses and routes of administration of losartan needed to be conducted in future.

INTRODUCTION: Rheumatoid arthritis affects 1% of population worldwide 1,2. It is a chronic inflammatory disorder of the joint characterized by inflammation of the synovial membrane, pain, and restricted joint movement. It is poly-articular joint disease characterized by massive synovial proliferation and subintimal infiltration of inflammatory cells, which along with angiogenesis leads to the formation of a very aggressive tissue called ‘pannus’. Expansion of the pannus induces bone erosion and cartilage thinning, leading to the loss of joint function 3.

The renin-angiotensin system (RAS) plays an important role in the regulation of blood pressure and fluid homeostasis. Two distinct subclasses of the angiotensin II (Ang II) receptors, AT1 and AT2, have been described. This octapeptide hormone also has a number of other effects and, in particular, autocrine and paracrine pro-inflammatory properties 4.

In view of the different studies, our study was undertaken to find out the anti-inflammatory role of losartan in experimental RA.

Animals: Albino-Wistar rats of either sex, 8-10 weeks old and weighing 150-200 grams were procured from Haffkine Biopharma Corporation, Parel. Animals were fed with standard pellet diet and water ad libitum. They were housed in animal laboratory at temperature (25℃+2℃), relative humidity (45%-55%) and 12 hours light dark cycle was maintained. The experimental protocol was reviewed and approved by institutional animal ethics committee (IAEC), B.Y.L. Nair Ch. Hospital and T.N.M.C., Mumbai. All experiments carried out according to guidelines suggested by the Committee for the Purpose of Control and Supervision of Experiments on Animals (CPCSEA).

Losartan (4.5 mg/kg) and indomethacin (4.5 mg/kg) was suspended in 0.3% Carboxy-methyl cellulose (CMC) in distilled water for oral administration to each rat.

Study design: The study comprised of three groups of eight animals each (n=8) and treatment given is described below:

Induction of adjuvant induced Arthritis 13: Arthritis was induced in all animals on day 1 by intradermal injection of 0.1 ml of FCA suspended in oil by no.26 needle in to the foot pad of right hind paw.

The subplantar injection of 0.1 ml of this suspension in the right hind paw results in primary, non-immune localized inflammatory response in the right hind paw. This local swelling (primary lesion) begin in the injected paw within 24 hrs, reach peak on 3rd -5th day and subsides by day 8-9. This local swelling on day 5 corresponds to acute inflammatory reaction, indicating the influence of therapeutic agents on this phase.

This is followed by the secondary immune systemic response after a delay of 11-12 days after injection of FCA. Secondary lesions are characterized by inflammation of non-injected sites (left hinpaw, forepaws, ears, nose and tail), and by decrease of weight. The secondary lesions are present till day 21. Day 21 was used for the influence of drugs on this phase of RA.

Histopathology: On day 21 the animals were sacrificed by ether anaesthesia. Left hind-paws with ankle joints obtained from rats were harvested post-mortem, fixed in 10% buffered formalin, decalcifiedin 5% nitric acid for up to 48 hours, routinely processed and embedded in paraffin wax. Sagittal sections (5 µm) were taken from the paraffin blocks and stained with haematoxylin–eosin (H & E) stain. The joints were studied by blinded examiner from the Pathology Department (B.Y.L. Nair Ch. Hospital, Mumbai).

Histopathologicalsynovitis grading 14: The synovial inflammation was scored in 3 categories as follows:

Mercury Plethysmography: A mark was put on the right and left hind limb of rat at the malleolus to facilitate uniform dipping at subsequent readings. The rat was held with left hand and the hind limb was dipped in the mercury column up to the mark. In this study, paw volume (in ml) was expressed as displacement of mercury in plethysmograph tube in cm.

Micrometer screw gauge: The micrometer screw gauge uses an auxiliary scale (measuring hundredths of mm) which is marked on a thimble with rotating vernier scale. In order to measure the diameter of the rat paw, hind paw was placed between the jaws, and the thimble was rotated using the ratchet until the object was secured. The maximum diameter of the paw was measured in mm.

We assessed the rat paw edema by mercury plethysmography as well as by micrometer screw gauge. On day 5 Losartan 4.5 mg/kg significantly reduced the rat paw edema on right side as compared to disease control group (p<0.001) by both methods (Figure 1 & 2). On day 21 losartan 4.5 mg/kg though showed the anti-inflammatory effect as compared to disease control group, it was not statistically significant (p>0.05) (Figure 3 & 4). 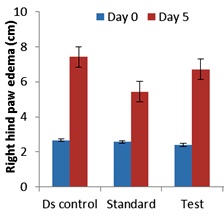 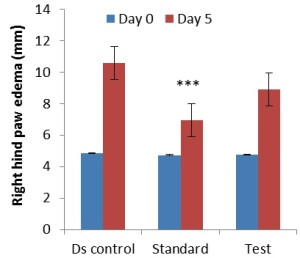 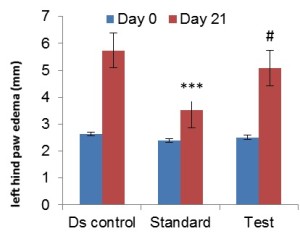 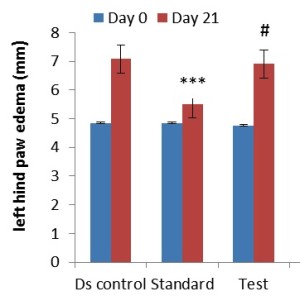 Histo-pathological grade of synovitis and secondary lesion score were also reduced by losartan 4.5 mg/kg as compared to disease control group but statistically was not significant  (p>0.05) (Table 1).

On comparing the change in the body weight from day 0 to day 21, the weight gain in indomethacin and losartan group was significantly greater than disease control group (p<0.05) (Table 1). 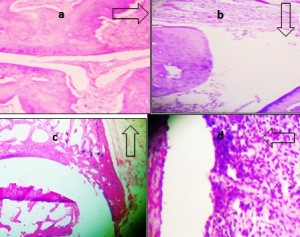 TABLE 1: EFFECT OF LOSARTAN ON HISTOPATHOLOGICAL GRADE, GRADE OF SECONDARY LESIONS AND CHANGE IN BODY WEIGHT IN ADJUVANT INDUCED ARTHRITIS IN RATS.

Freund’s adjuvant induced arthritis in rats is the most commonly used model for experimental induction of RA 20. This model involves immunological process for induction of arthritis which closely resembles the process of rheumatoid arthritis in human beings 21.

We assessed rat paw edema by mercury plethysmography as well as by micrometer screw gauge. Significant reduction of right hind-paw edema by losartan on day 5 (p<0.001) by both methods (Figure 1& 2) suggest that losartan 4.5 mg/kg is effective anti-inflammatory agent in acute phase of inflammation in experimental RA. This was supported by Laudanno et al., 22 who showed that the three ATI receptor antagonists such as candesartan, losartan and valsartan yielded anti-inflammatory effect in carrageenan foot-pad edema. In contrast to this, Raghavendra et al., 16 showed thatAT1 receptor antagonist losartan enhances angiotensin-II facilitated carrageenan-induced paw edema.

On day 21, losartan reduced the left hind-paw edema (Figure 3 & 4), histo-pathological grade of synovitis and secondary lesion score (Table 1) as compared to disease control group; but statistically significant results were not obtained (p>0.05).This could be attributed to the fact thatlosartan is a selective AT1 receptor blocker and Ang II activates NF-κB via both AT1 and AT2 receptors 23, 24. Esteban et al., 25 showed that only combined treatment with AT1 and AT2 antagonists completely blocked renal inflammatory infiltration and NF-κB activation in Ang II infused mice. Therefore, therapy combining AT1 and AT2 antagonists may be more effective than therapy using AT1 antagonist alone in reducing the inflammation of arthritis.

In our study, we administered a relatively low dose of Losartan. Shao et al., 26 demonstrated that the imbalance in T cell subsets was reversed by olmesartan, only in a dose-dependent manner. Furthermore, Kayo et al., 8 proposed that for more effective suppression of arthritis, the means of administration and the doses of ARBs need to be modified.

In conclusion our study suggests that losartan could be a potential candidate for treatment of RA. It is therefore recommended that studies using different doses and routes of administration of Losartan should be conducted in future.

Conflicts of interest: None