ABSTRACT: Anti-stress activity of hydro-alcoholic extract of Sauropus androgynous leaves was investigated against experimentally induced stress in rats using forced swimming endurance test and chronic cold restraint stress test. Acute toxicity study was performed and hydro-alcoholic extract of Sauropus androgynous leaves was found to be safe at a dose of 2000 mg/kg bodyweight. Two doses 200 mg/kg (SALE-200) and 400 mg/kg (SALE-400) of the extract was subjected to the evaluation of anti-stress activity. The parameters like cholesterol, triglycerides and corticosterone were estimated to determine the anti-stress activity. The animals pre-treated with SALE-200 and SALE-400 significantly restored the altered biochemical and physical parameters, when compared with stress control group. In addition the histopathology of the adrenal gland also confirmed the anti-stress activity of the extract as the SALE-400 treated groups showed significant recovery and SALE-200 treated groups showed moderately significant recovery of architecture of the adrenal gland. However, the maximum activity was observed at 400 mg/kg bodyweight. The findings of the present study concluded that the hydro alcoholic extract of Sauropus androgynous leaves showed a significant dose-dependent anti-stress activity.

INTRODUCTION: Stress is a normal reaction of the body to a stimulus which disturbs its physiological equilibrium or in other words - homeostasis. Stress happens whenever mind and body react to some real or imagined situation. Situation that cause stress reaction are called stressors 1.

The automatic reaction of the body to stress is called the “fight or flight or freeze reactions” or the stress response.

But at most times, stress affects both mental and physical health of a person in an adverse manner and is bad for one's overall well being. In today’s world, every individual is likely to face stressful situations in daily lives due to various factors such as insecurity, competition, job issues, lack of sleep, illness, financial matters, etc 2. One of the best and most powerful ways to lower the effects of stress and bring the body to a state of metabolic harmony is by using adaptogens. An adaptogen can be defined as a plant which is completely safe and non-toxic, and which specifically reduce stress, both mental and physical 3. In traditional system medicine such as the Ayurveda, several plants such as Glycyrrhiza glabra, Withania somnifera, Panax ginseng, Rhodiola Rosea, Schisandra chinensis, etc are already recognized to have anti-stress activity.

One such plant, Sauropus androgynus (Sweet leaf), belonging to the family Euphorbiaceae, is a medicinal herb having a long history of usage in Ayurveda. It is one of the most popular leafy vegetable from India to Malaysia. It merits attention and cultivation in Australia, as it is one of the most prolific, heavy yielding, nutritious and appetizing green leaves. In medicine, the leaves are used as tonic, for soothing lungs and relieving fever. Leaves are also used for rejuvenating cells and for regular bowel elimination. It is also used for treating headaches and urinary problems. It is also said to stimulate milk production and also used for recovering the womb after birth. The roots are used in treatment of cardiovascular diseases or its symptoms including vertigo, dizziness etc. Sauropus androgynus is highly nutritious and has many culinary uses. Fresh leaves are excellent source of provitamin A, carotenoids, vitamins B and C, proteins and mineralsIts shoot, fruit, flowers and leaves are eaten raw or cooked. Young shoots are sold as a delicacy in Malaysia and fruits are candied. A green dye obtained from rubbing and squeezing the leaves is used as food colour. Phytochemical analysis of the leaves of this plant indicated the presence of flavonoids, alkaloids, glycosides, tannins, saponins, steroids, carbohydrates and proteins 4-7. Further, the plant has been found to contain high concentrations of flavonoids, kaempferol and quercetin and these flavonoids are well proven to possess anxiolytic and anti depressant properties 6, 7, 9. However, no such scientific data are available in published form to support anti-stress activity.

Hence, the present study was undertaken to evaluate the anti-stress activity of hydro-alcoholic extract of Sauropus androgynus leaves.

The fresh leaves of Sauropus androgynus used for the present studies were collected from Mangalore, Karnataka and authenticated by Taxonomist. The leaves were dried under shade. The dried leaves were pulverized into coarse powder by a mechanical grinder and used for extraction.

The powdered material (150g) of S. androgynus leaves were packed in Soxhlet extractor and extracted using hydro-alcohol as solvent. The temperature was maintained on an electric heating mantle with thermostat control. Appearance of colourless solvent in the extractor was taken as the termination of extraction.The extract was concentrated by using rotary flash evaporator. The concentrated extract was then air dried at room temperature and stored in air tight container until used.

The hydroalcoholic extract of the leaves was subjected to preliminary phytochemical screening for detection of major chemical constituents.

Healthy Wistar albino rats (150–200 g) of either sex used for the experiment were procured from the animal house of Srinivas College of Pharmacy, Mangalore. They were maintained under standard conditions (temperature 22 ± 2°C, relative humidity 60±5% and 12 h light/dark cycle).

Acute toxicity study of hydroalcoholic extract of the leaves of S. androgynus was determined in Wistar albino rats according to OECD guidelines No. 42510. The animals were fasted overnight and the extract was administered orally with a starting dose of 2000 mg/kg, to different groups of animals. Animals were observed continuously for first 3 h and monitored for 14 days for mortality and general behaviour of animals, signs of discomfort and nervous manifestations.

The Wistar Rats (150-200g) of either sex were randomly divided into five groups of six animals each. The different groups were assigned as below.

Animals of Group III, Group IV and Group V were treated with their respective doses continuously for 7 days. All the groups except group I were subjected to swimming on the 7th day. Rats were allowed to swim till complete exhaustion and the endpoint was taken when animal starts drowning. The mean swimming time for each group was noted. Immediately the animals of each group were anaesthetized with anaesthetic ether and blood was collected by cardiac puncture. The anti-stress activity was evaluated using parameters like plasma corticosterone, cholesterol and triglycerides.

The Wistar Rats (150-200g) of either sex were randomly divided into five groups of six animals each. The different groups were assigned as below.

All the animals were exposed to a temperature of 4ºC for 2 h daily for a period of 10 days. All the treatment was given daily orally. On the 11th day, the animals in each group were anaesthetized with anaesthetic ether and blood was collected by cardiac puncture. The anti-stress activity was evaluated using parameters like plasma corticosterone, cholesterol and triglycerides. Later the adrenal gland was collected by sacrificing the animals and assessed for histopathological examinations.

All data were expressed as mean ± SEM. The statistical significance between groups was compared using one way ANOVA followed by Dunnett’s t test.

Acute toxicity studies were carried out according to OECD guidelines. No mortality was observed at 2000 mg/kg body weight. Therefore 1/10th (200 mg/kg) and 1/5th (400 mg/kg) doses were taken as low and high effective dose for anti-stress activity. 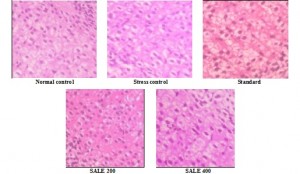 DISCUSSION: In stressful situations, various inputs of the hypothalamus like the cerebral cortex, limbic system, visceral organs etc. pass the information about stress onto the hypothalamus which results in the activation of the HPA pathway. The hypothalamus secretes the corticotropin-releasing hormones (CRH) which is transported to the pituitary gland via the hypophyseal portal system and it causes the pituitary gland to secrete adrenocorticotropic hormone (ACTH) into the blood stream. The ACTH binds to the adrenal gland, which in turn releases the final key messenger, corticosterone, once released has widespread effects in the body. Corticosterone takes away the energy i.e. glucose from non-critical organs like the digestive and reproductive organs and redistributes it to the vital organs such as heart and brain.

This helps the body to overcome the stress and regain homeostasis. Corticosterone has direct negative feedback on the hypothalamus to decrease the formation of CRF and the anterior pituitary finally turns off the HPA-axis’ stress-response system. This feedback helps to regulate the plasma concentration of corticosterone. It is when the body’s HPA-axis becomes overtaxed; it causes harm to the body. When corticosterone is continuously present in the blood stream, the energy is always getting redistributed to the flight or fight organs. This makes the body susceptible to immune system attacks14-16.

Hence increased concentration of corticosterone in the plasma is an indication of stress. The experiments conducted as a part of this study showed decreased corticosterone levels in SALE treated groups compared to the stress control group. This shows the anti-stress potential of S. androgynus. The increased corticosterone levels during stress increases adrenal hypertrophy and hyperplasia. The histopathological analysis of the adrenal gland of SALE-200 treated animals showed moderately significant recovery of architecture and SALE-400 treated animals showed significant recovery of architecture.

It is observed that during stress, there is an increase in the cholesterol level to meet the extra metabolic demands of the tissues. The levels of number of hormones like corticosterone, epinephrine and nor-epinephrine in the blood increases. These hormones mobilise the lipid stores of adipose tissue. Experimental models treated with SALE showed a dose-dependent decrease in cholesterol levels signifying its anti-stress potential.

The effect of SALE treatment on serum triglycerides, serum cholesterol and corticosterone levels and the histopathological evaluation of the adrenal gland showed that Sauropus androgynus indeed has anti-stress potential.

ACKNOWLEDGEMENT: We acknowledge the authorities of Srinivas College of Pharmacy Mangalore for providing necessary facilities to conduct this research project