Aim of study is to evaluate the potential anti-tussive activity in a mouse model induced by sulphur dioxide gas of ethanolic extract of “Rosa centifolia”. The ethanol extract of Rosa centifolia (250mg/kg 500 mg/g p.o) showed significant anti-tussive activity, the cough inhibition (35% and 57% respectively) and being comparable to that of 10-20mg/kg of codeine phosphate (41 and 64% respectively).The effect of ethanolic extract on the trachea was also tested it did not relax pre-contractions in guinea pig trachealis induced by KCl and histamine.

INTRODUCTION: Cough is a protective reflex, its purpose being expulsion of respiratory secretions or foreign particles from air passages and is a symptom of respiratory illness that prevents talking and cause chest and thorax pain. It occurs due to stimulation of mechano or chemo receptors in throat, respiratory passages or stretch receptors in the lungs 1. A number of drugs reduce cough as a result of their central actions, although the exact mechanism still are not entirely clear. Included among them are the opioid analgesics codeine and hydrocodone most commonly used to suppress cough. A 10 or 20mg oral dose of codeine although in effective for analgesia, produces a demonstrable antitussive effect and higher doses produce even more suppression of cough 2.

However, their use brings about side effects such as increase in mucous viscosity, decrease of expectoration, hypotension or constipation and drug dependence 3. Therefore, in recent years much effort has been made to search for natural plants with nil adverse effects. In traditional Indian medicines, many plants are recorded to treat respiratory complaints such as cough, asthma, bronchial affections, pneumonia and expectoration which have been used for hundreds of years. However, it still cannot be accepted by most advanced countries as therapeutic agents. The major reason is lack of chemical and pharmacological evaluation on them.

Rosa centifolia belong to the family Rosaceae is an erect shrub 1 to 2 meter in height. Flowers of the plant are large, showy and colorful. This plant is not explored still now, but traditionally it is used in treatment of diabetes 4, conjunctivitis 5, in aroma therapy, it’s used in Chinese herbal medicine as antibacterial agent 6. The plant contains carboxylic acid, terpene, myrcene and vitamin c 7.

In this study the antitussive effect of ethanolic extract of Rosa centifolia is evaluated.

Plant and extracts: Rosa centifolia were collected from Cuddalore district, Tamil Nadu during the month of June 2010 the plant material were identified and authenticated by Dr. K. Manivannan, Professor and Head, Department of Horticulture, Annamalai University, Chidambaram, specimen no: Hort/56/2010 dated 18 august.

The flower extract was macerated 50mg of chopped; dried flower was macerated with 500ml of ethanol. The solvent was then removed under reduced pressure until the extract volumes reached 20ml.The concentration in the final extract were 10%w/v.

A sulphur dioxide gas reservoir had been created previously and by opening cocks, pressure in the gas reservoir was evaluated and recorded using a water manometer. The extract and codeine were orally administered to mice.

After 30 min., the mice were exposed to sulphur dioxide in 10ml of H2O in a dessicator. After 20s the mice were taken out of the dessicator and placed in an up in an up ended filter funnel with a stethoscope at the tip and frequency of cough was observed for 5 min.

Effect of Ethanolic Extract on Trachea: The guinea pigs were killed via intra peritoneal injection of an over dose of sodium pentobarbital (75mg/kg) and exsanguinated. The trachea was isolated and each trachea was cut into six rings containing four cartilaginous segments. They were fixed between two hooks inserted into the lumen and placed in a Krebs solution in a 3ml organ bath at 37oC, the ph was adjusted to 7.2 and a mixture of 5% CO2 in O2 was bubbled continuously into the chamber. The isotonic high K+ Krebs solution had the same composition 60Mm NaCl was replaced with 60 Mm KCl. The tissue was suspended in normal Krebs solution under an initial tension of 1g and contractions were stabilized over 1 hr. After the tissue were pre contracted with 60Mm KCl, 30 µM histamine the ethanolic extract of Rosa centifolia (10-1000µg/ml) was added to organ bath 9.

Statistical Analysis: The experimental results were expressed as the mean ± the standard error of mean (S.E.M) significance was evaluated by t-test.

TABLE 1: EFFECT OF ETHANOLIC EXTRACT OF ROSA CENTIFOLIA ON SO2 INDUCED COUGH IN MICE 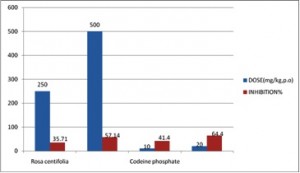 The ethanolic extract of Rosa centifolia did not relax the pre-contractions in guinea pig trachealis induced by KCl (60µM) and histamine (30µM). The relaxant effect on the trachea is not an indicator of effect on the airway so the anti- cough effect might act at a central level. Drugs that act in such a way are called central anti-tussive drugs 9. These agents may work on the cough pattern generator which creates different motoneuronal signals that produce the three phases of cough: inspiration, compression and expulsion 10. Codeine, one of the most popular anti-tussives is considered to be a selective centrally acting agent 11.

The essential oil obtained from Rosa centifolia is reported to have gastro intestinal relaxant activity; therefore the bronchodilatory effect of extracts obtained from this plant could be responsible for its anti-tussive property.

CONCLUSION: The results obtained in this study provide support for the use of Rosa centifolia in the treatment of cough. Further studies are required relating to the isolation and characterization of the active compounds present in Rosa centifolia in addition to investigation of pharmacological potential and evaluation of the mechanism of action.