ABSTRACT: Objective: Oecophylla smaradina (Formicidae) is an ant evaluated for its variety of medicinal uses. The objective of this study to evaluate the anti-ulcer activity using albino rats. Methods: The albino rats of either sex were divided into four groups. Ethanolic extract of Oecophylla smaradina (EEOS) was tested in the dose of 200 and 400 mg/kg p.o. respectively against by pylorus ligation induced ulcer models in albino rats. Results: Both the concentration (200 and 400 mg/kg p.o.) of extract have provided significant activity but EEOS 200 mg/kg, p.o, extracts were less effective when compared to EEOS 400 mg/kg, p.o. The antiulcer activity was accessed by evaluate the ulcer index in the test and standard drug treated group and also estimated the gastric volume, total acid, and free acid in the pylorus-ligated rats. Conclusion: The present study was revealed that ethanolic extract of Oecophylla smaradina have antiulcer activity.

INTRODUCTION: Peptic ulcer is a conglomerate of heterogeneous disorders, which manifests itself as a break in the lining of the gastrointestinal mucosa bathed by acid and pepsin 1. It is characterized by the disruption of the mucosal integrity of the esophagus, stomach, or duodenum. As the most common gastrointestinal disturbance, it affects 10-15% of the population at any one time 2. The Helicobacter pylori bacterium was discovered in 1980’s. The many patients affected gastritis and peptic ulceration. The 50% of gastric cancer involved by infection of H.  pylori 3. Zoo-therapy is a form of therapy which is defined as “the healing of human diseases by use of therapeutic products obtained or ultimately derived from animal 4.

Some article showed the animal-based medicine had been utilized in society 5. For the religious purpose, the animals were sacrifices in magic ritual 6. The focusing of the study is to identify the protection of ulcer using albino rats.

Extraction Method: The ant of Oecophylla smaragdina (OS) was collected and kept in the refrigerator for a freeze and dried. The dried ants were extracted under reflux for 2 h with 95% ethanol for three times successively 7. The experiment was approved by IAEC (Ref no.: SBCP/2015-16/CPCSEA/IAEC/II/I(c))

Anti-Ulcer Activity: Pyloric Ligated (Shay) Rat Model: The albino rats of either sex were divided into four groups of six animals each. Animals were fasted for 24 h before the study but had free access to water. The ethanolic extract at 200 and 400 mg/kg p.o. were given to the animals. Ranitidine (50 mg/kg) was used as a standard. After one hour, the animals were anesthetized using anesthetic ether. The abdomen was opened, and the pyloric portion was ligated. The abdominal wall was closed by sutures. The after four hours the animals were sacrificed the abdomen was opened, and the stomach was dissected out. The stomach juices were collected into a glass tube.

The volume of the gastric juice was measured and centrifuged at 2000 rpm for 10 min. From the supernatant, aliquots (1 ml of each) were taken for the determination of pH, total and free acidity. Each stomach was examined for lesions in the forestomach portion and indexed according to the severity of the animals treated as follows 8.

Volume of Gastric Juice: The volume of gastric juice was measured by the method described 9. The resected stomach content was centrifuged, and the supernatant fluid was measured.

Determination of pH: An aliquot of 1 ml gastric juice was diluted with 1ml of distilled water and the pH of the solution was measured using a pH meter.

Free Acidity and Total Acidity: The two drops of Topfer’s reagent was added in a diluted supernatant of gastric juice in a conical flask. 0.01N NaOH was taken in a burette, and it was allowed to titrate till the contents of the flask changed to yellow color. Then two drops of phenolphthalein were added, and the titration continued till the solution reached a permanent pink color. The volume of 0.01N NaOH consumed was noted 10. The total acidity and free acidity was expressed as mEq/L by the following formula:

Ulcer Score: The ulcer score was reworded as follows the incidence and grading of ulcer were done according to the method described. Necro hemorrhagic spots greater than 2 mm diameter was taken as ulcer these are graded as follows:

Ulcer index (UI) was measured by using the following formula:

Percentage inhibition of ulceration was calculated as below: 11

RESULTS AND DISCUSSION: Antiulcer effect of Oecophylla smaragdina extract was challenged against Pylorus ligation induced ulcers model, in this both the concentration of extract have provided significant activity as like that of standard but EEOS 200 mg/kg, p.o, extracts were less effective when compared to EEOS 400 mg/kg, p.o.

The evidence for its significant reduction of gastric volume, total acidity, free acidity, ulcer index and increase the volume of pH. The EEOS treated group significantly inhibited the formation of pylorus ulcer in the stomach and also decreased acid concentration, gastric volume and increased the pH values. It is suggested that the EEOS at both the concentration has anti-ulcer potency. Results were shown in Table 2 and 3. 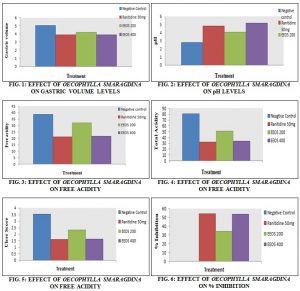 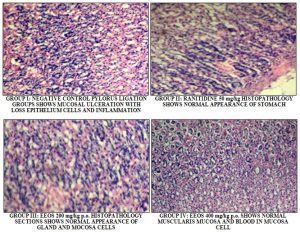 CONCLUSION: From the discussion part it is clear that the EEOS extract at both the concentration (200 and 400 mg/kg, p.o) have anti-inflammatory, anti-arthritic, antiulcer and cardioprotective activity, But EEOS 400 mg/kg, p.o was more potent than EEOS 200 mg/kg, p.o. From this data, we can conclude that the effect produced by the extract was dose-dependent.

Thereby deep focus should be taken in part to identify and isolate the active constituent for future studies. So, that the active benefit from the weaver ant Oecophylla smaragdina will access as a pharmaceutical dosage form to mankind.

ACKNOWLEDGEMENT: I hereby express my sincere gratitude to Mr. S. Sriram Ashok (Correspondent, Sankaralingam Bhuvaneswari College of Pharmacy, Sivakasi, Tamil Nadu) for his motivation and valuable suggestions in the successful completion of this work.