INTRODUCTION: The ancient Indian system of medicine, Ayurveda is renowned as one of the major systems of alternative and complementary medicine, which gives knowledge about the different types of medicinally useful drugs for the treatment of various kinds of diseases including anaphylaxis, bronchial asthma and allergy 1. Anaphylaxis is one of the diseases with diverse manifestation that can affect mankind. Sometimes it may also responsible for significant morbidity and mortality 2.

The triggers for the anaphylaxis are foods like nuts fish and wheat etc., drugs like Penicillin, venom from insects, latex from natural rubber, and allergy shots and sometimes high temperature may also plays a important role in the pathogenesis of the anaphylaxis. Lymphocytes, immunoglobulins and mast cells play a crucial role in the etiopathogenisis of anaphylaxis 4. Various physiological changes which are observed during anaphylaxis are due to the alteration in the mast cell physiology.

The primary symptoms of anaphylaxis are due to the histamine release from the mast cells. Histamine release is initiated by increased concentration of calcium within the cell which leads to mast cells degranualation 5. Cross linking of the antigen along with the IgE antibody which is bound to Fc epsilon RI receptors on mast cells leads to degranulation 6.

There are different treatment procedures were available for the anaphylaxis. But all of them have limitations like drug interactions, adverse reactions and some other compliance issues 4. Withania somnifera shows hypoglycemic activity 7, antiplasmodic activity 8, hypolipidemic activity 9, anthelmintic activity 10 and antiinflammatory activity 11 etc. The present research work involves the evaluation of the antianaphylactic activity of the petroleum ether, methanolic and aqueous extracts of Withania somnifera on the rat peritoneal mast cells by active anaphylaxis model.

Plant material: The plant material was collected from the local market of Tirupati. It was identified and authenticated in Department of Botany, S.V. University, Tirupati. The plant materials were coarsely powdered by using the rotary grinder and stored in airtight plastic containers. The powder prepared was used for extraction.

Preparation of extracts: The collected plant material was washed and dried at room temperature for 15-20 days. Drying was done under shade and was subjected for size reduction by using rotary grinder. The fine powder which was obtained after size reduction is used for preparation of extracts. The fine powder (100 g) was extracted by using soxhlet apparatus by using 400 ml of petroleum ether for about 48 h. After defatting, the marc was dried at 50 °C in hot air oven, and it was packed in soxhlet apparatus for further extraction with 400 ml of 95% ethanol. Extraction was continued, until it does not show the presence of any residue on evaporation. The aqueous extract was prepared by cold maceration with 3% methanol-water for 7 days with frequent shaking. The rotary vacuum evaporator was used to remove the solvents under reduced pressure.

Experimental animals: Both male and female Wistar rats (175 – 200 g) were used for this study. The animals were housed in standard conditions of room temperature (22 ± 2 0C), relative humidity (60 ± 5%) and light (12 h light/ dark cycle) were used. To avoid coprophagy and fighting all the rats were placed in wire-bottomed cages. All the animal experiments were carried out in accordance with the guidelines of CPCSEA. Sheep serum and tripple antigen is used to induce anaphylaxis. The sheep serum was prepared by collecting the fresh blood from sheep under sterile condition.

Active Anaphylaxis: 72 rats were taken and are divided into 12 groups of six animals each. The group-1 is unsensitized and group-2 to 12 was sensitized with sheep serum and tripple antigen. Sensitization of rats were done by injecting subcutaneously 0.5 ml of sheep serum along with 0.5 ml of triple antigen which containing 20,000 million Bordetella pertusis organisms 12 (Serum Institute of India Ltd., Pune). The animals of group-1 are unsensitized group and is a normal group which receives water (Vehicle). Animals of group-2 received water and served as control. Rats of group-3 served as standard group, received 10 mg/kg/day of prednisolone (reference drug) orally for 14 days.  Animals of group-4, 5 and 6, were administered with 250, 500 and 750 mg/kg/day of petroleum ether extract of Withania somnifera respectively.

Mast cell count: For the mast cel count, a piece of intestinal mesentery was excised and spread in a petridish, containing Ringer–Locke solution at a temperature of 37 0C. The mesentery was challenged with 5% v/v sheep serum for a period of 10 minutes and it was transferred to a wide mouthed bottle which contains 10% formalin, and kept aside for 24 h.  After 24 h the mesenteric fans were stained with thionin (0.25%) on a clean slide and fixed and dried. Distilled water was used for washing the excess stain followed by dehydration with absolute alcohol.  Finally the slides were cleared in xylene and mounted in diphenylphthalein xylene. The prepared slides were used for Mast cell count 14. The results were analyzed statistically using ANOVA. The level of significance was fixed at P<0.05.

RESULTS: At the end of study, the rats of group-2, antigen challenge group shows less number of intact mast cells due more degranulation of mast cells. About 85% of mast cells were degranulated. Animals of the group-3 and group-8, which were given with prednisolone (10 mg) and 500 mg/kg of methanolic extract of Withania somnifera prior to sensitization shows more number of intact mast cells, i.e. which has the decreased percentage of degranulation (P<0.005), when compared to the petroleum ether and aqueous extracts of Withania somnifera. There was no significant difference among the Group-3 and Group-8. The results were depilated in Table 2, and graphically represented in Fig. 1. Histopathological studies of effect of different extracts of Withania somnifera on mast cell degranulation were shown in Fig. 2. 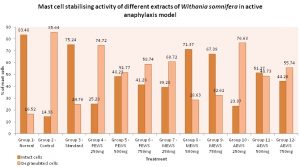 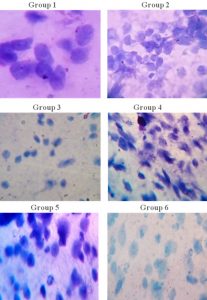 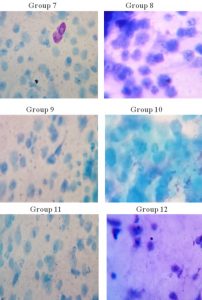 Stabilization of mast cell membrane and inhibition of histamine release from the mast cell are the different mechanisms of the antianaphylactic activity. The histamine may be released from the mast cells are due to increased cocentration of calcium within the cell due to calcium release from an intracellular store 16. The methanolic extract of Withania somnifera inhibits the degranulation of mast cells. It may be due to decreased cAMP phosphodiesterase enzyme which leads to increase in the cyclic AMP levels which is responsible for the fusion of granules.

CONCLUSION: In conclusion all the above findings reveal that, the 500 mg of methanolic extract of Withania somnifera has the antianaphylactic activity when compared to all the three extracts (petroleum ether, methanol and aqueous extracts). The stabilizing potential of methanolic extract of Withania somnifera may be due to suppression of antibody production and the inhibition of antigen induced histamine release.

ACKNOWLEDGEMENTS: The authors are thankful to the Department of Biochemistry, S.V. University, Tirupati, Andhrapradesh, for providing the necessary facilities to carry out the research work and would like to thank the animal house staff of Department of Pharmacy.

CONFLICT OF INTEREST: No