INTRODUCTION: Asthma is a chronic inflammatory lung disease that can cause repeated episodes of cough, wheezing and breathing difficulty. During an acute asthma episode, the airway lining in the lungs becomes inflamed and swollen and excess mucus production occurs in the airway 1 asthma prevalence increases globally by 50% every decade 2. With the projected increase in the proportion of the world‘s urban population from 45% to 59% in 2025, there is likely to be a marked increase in the number of asthmatics worldwide over the next two decades 3.

Although the fundamental causes of asthma are not completely understood, the strongest risk factors for developing asthma are inhaled asthma triggers such as pollens and moulds, tobacco smoke; and Chemical irritants.

The prevalence of allergy and asthma has risen in the recent years despite an improvement in the general health of the population. Approximately 300 million people worldwide currently have asthma, with estimates suggesting that in the workplace 4. Large numbers of drugs are used for in the treatment of asthma. However none of them seems to be an ideal drug 5.

The currently used drugs for the treatment of asthma in modern medicine are far from satisfactory as they provide only symptomatic relief, produce several adverse effects and may lose effectiveness on continued use 6, 7. The search for new drug is still the need of the day. Citrullus colocynthis (Fruits.) belonging to the family Cucurbitaceae a large number of such compounds as flavonoids, alkaloids, steroids, flavonoids are having anti-allergic and antioxidant activity 8. Alkaloids are having anti-inflammatory activity. Traditionally, the Fruits juice of Citrullus colocynthis is used in treating asthma, scanty urine, and internal inflammation disorders 9. Therefore, by considering by considering the traditional claim reported pharmacological activity and chemical constituents present in plant, the need was felt to investigate the anti-asthmatic activity of Citrullus colocynthis (Fruits.) in laboratory animals 10.

Plant collection and Authentication: The collection of plant materials of Citrullus colocynthis Fruits was done in month of January 2015 from CAJRI(Central Arid Zone Research Institute) of Jodhpur, Rajasthan and the identified and authenticated by S.L. Menna, Scientict C & H.O.O Botanical survey of India, Jodhpur, Rajasthan (voucher specimen no: BSI/AZRC/ I.Tech./2014-15/(PI.Id.)/714) and submitted at G.D. Memorial College of Pharmacy, Jodhpur,(Raj)

Preparation of plant extract: The whole plant parts of plant were washed and dried under shade for 7 days at temperature 20-25°C. Cleaned and grind with help of iron Morter pestle. The powders (40 size mesh) were used for the soxhlet extraction. Plant material 20 g was extracted with 250 ml of petroleum ether in soxhlet apparatus for 40hrs at temp.60-800C to the powder and then mark was extracted with 250 ml ethanol (70%) for 72 hrs at temp.75-800C. The extracts were collected and evaporated to dryness to give dry crude extract. The yield of ethanolic extract was 8.50%w/w. The obtained extracts were subjected to phyochemical investigation.

Acute Toxicity Study 13: Albino rats of either sex weighing 200-250 gm were used in the study. Acute oral toxicity was performed as per Organization for Economic Co-operation and Development (OECD)-423 guidelines. There was no behavioral abnormality and zero mortality was recorded till 48 h post treatment with the dose 2000mg/kg, Therefore1/10th of the dose 2000mg/kg of Citrullus Colocynthis was selected i.e., 200mg/kg as middle dose. Different doses (100, 200 mg/kg, p.o) of Citrullus colocynthis were later chosen for this study based on the acute toxicity testing.

Isolated Goat tracheal chain preparation: 14 The goat tracheal tissue was obtained immediately after slaughter of animals. Pieces of trachea were collected in freshly prepared ice-cold oxygenated Kreb’s solution (Composition NaCl, 115; KCl, 4.7; CaCl2, 2; NaHCO3, 25; KH2PO4, 1.2; MgCl2, 1.2; glucose, 11.5). Goat trachea was then cut into individual rings and tied together in series to form a chain. It was suspended in bath containing Kreb’s solution and maintained at 37 ±1ºC, a stream of air was bubbled through the organ tube (1 bubble/sec). One end of the tracheal muscle was attached to S-shaped aerator and the other attached to isotonic frontal writing lever to a drum. The tissue was allowed to equilibrate for 45 min under a load of 400 mg. A dose response curve for histamine was recorded at variant molar concentrations by maintaining 15 mint time cycle.

In absence and in presence of Citrullus colocynthis and standard drug Chlorpheniramine maleate (1 µg/ml).

Histamine induced Bronchoconstriction in Guinea pig: 15 Overnight fasted guinea pigs were randomly divided into five groups (n=5). Prior to drug treatment, each animal was placed in the histamine chamber and exposed to 0.2 % histamine aerosol.

T1 =the mean of PCT before administration of test drugs.

Statistical Analysis: The results of various studies were expressed as mean ± SEM and analyzed statistically using one way ANOVA followed by Student’s t-Test to find out the level of significance. Data were considered statistically significant at minimum level of p <0.05.

Hence Chlorpheniramine maleate and ethanolic extract of Citrullus colocynthis (100µg/ml) shifted the DRC of Histamine towards the right side indicating that there was competitive antagonism between histamine and both the drugs for histaminergic receptors. (Fig. 2).

Effect of ethanolic extract of Citrullus Colocynthis on histamine induced bronchoconstriction in guinea pig: The guinea pigs when exposed to 0.2%w/v histamine aerosol showed signs of progressive Dyspnea leading to convulsions. Chlorpheniramine maleate (2mg/kg, i.p) significantly prolonged (p<0.01) the preconvulsive dyspnea in 1st, 4th and 24th hr as compared to control and the percent % protection observed was respectively (Table3). The ethanolic extract of fruits of Citrullus colocynthis at doses of 100 mg/kg (p<0.05) and at the dose of 200 p.o (p<0.01) significantly prolonged the preconvulsive dyspnea at 1st, 4th hr and 24 hr as compared to control. Thus showed more protection against preconvulsive dyspnea as compared to control, following exposure to histamine aerosol.

Effect of ethanolic extracts of Citrullus colocynthis on milk induced Leucocytosis in mice; Table 4 Subcutaneous administration of boiled and cooled milk(4ml/kg) into the swiss albino mice as antigen and produced allergic response in mice. The total leucocytes count was increased 24 hour after milk injection (Table 4).

The total leucocytes count in control group was significantly higher as compared to ethanolic extract of Citrullus colocynthis group(p < 0.0001) (Fig. 4)

TABLE 3: EFFECT OF ETHANOLIC EXTRACTS OF FUITS OF CITRULLUS COLOCYNTHIS ON PERCENT PROTECTION IN HISTAMINE INDUCED BRONCHOCONSTRICTION IN GUINEA PIGS 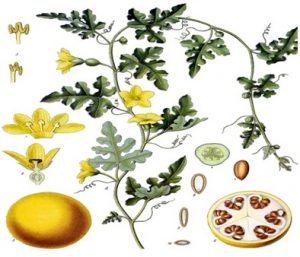 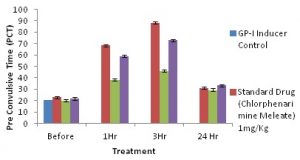 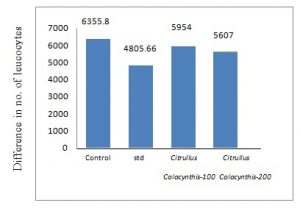 DISCUSSION: Asthma is a chronic respiratory disease affecting a large proportion of population throughout the world. Bronchial provocation with allergen induce a prompt early phase immunoglobulin E (IgE)- mediated decrease in the brochial airflow (forced expiratory volume in one second) followed by a late phase IgE-mediated reaction with a decrease in the bronchial airflow for 4-8 hours. Initially asthma is characterized by the presence of increased number of various inflammatory mediators that are eosinophils, neutrophils, lymphocytes and plasma cells in the bronchial allergens tissues, bronchials secretion and mucus. The cross linkage of IgE molecules by allergens causes mast cells to degranulate, releasing histamine, leukotrienes,  and other mediators that perpetuate the airway inflammation. Ultimately the mediators promote vascular permeability, smooth-muscle contraction and mucus production, which cause symptoms of asthma including airway constriction, coughing, shortness of breath and wheezing. The stimulation of H1receptor causes contraction of bronchial smooth muscle. In the present study, the potential of ethanolic extract of Citrullus colocynthis has antagonized the histamine induced contractions on goat tracheal chain preparation which have shown a significant relaxation indicated by right shift of DRC of histamine.