INTRODUCTION: Cancer is one of the most common devastating disease affecting millions of people per year 1.  Tumor or neoplasm is usually defined as a growth of an abnormal mass of tissue due to uncontrolled cellular growth; the term is malignant tumors 2. Cancer is a preventable disease, can be reduced by avoidance of cancer-causing biological, chemical, and physical agents, in addition to the habitual consumption of cancer protective foods 3.

Cancer is the uncontrolled growth of abnormal cells in the body. There are many different kinds of cancers. Cancer can develop in almost any organ or tissue, lung, colon, breast, skin, bones or nerve tissue 4.

Lymphoma is a relatively rare cancer in the general population; it is one of the most common cancer diagnosed in young person’s 5. Lymphoma is a variety of cancer specific to the lymphatic system. The lymphatic system is an important network of glands and vessels which make up the body’s main line of defense against disease (immune system).

The network manufactures and circulates lymph throughout the body. Lymphoma is a cancer of certain types of blood cells (WBCs) called lymphocytes. These cells circulate throughout the body in the stream and in the lymphatic system, which is part of the body’s immune system. The network is bean- shaped organs called lymph nodes or glands. The nodes are responsible for the manufacture and storage of these infection- fighting cells. Lymph nodes are clustered in the neck, under the arms, in the groin and abdomen and may swell and become tender when the body is fighting infection (such as mono or strep throat).

Oxidative stress in the cells or tissues refers to the enhanced generation of reactive oxygen species (ROS) and/or depletion in the antioxidant defense system, causing an imbalance between pro-oxidants and antioxidants. This imbalance can ultimately result in damage to molecules, including proteins, lipids, carbohydrates and DNA. ROS would assault on important biological molecules such as DNA, protein or lipid leading to many degenerative diseases, such as cancer, Alzheimer’s, arthritis and ischemic reperfusion 6.  Recently, natural foods and food-derived antioxidants, such as vitamins and phenolic phytochemicals, against oxidative damage are considered beneficial for human health 7.

Traditional medicine is an important source of potentially useful new compounds for the development of chemotherapeutic agents 8.

Phytochemicals derived from plants are excellent antioxidants. Antioxidants appear to act against diseases by raising the levels of endogenous defense, by up-regulating gene expressions of the antioxidant enzymes 9, 10. The phytonutrients found in Bok choy are powerful antioxidants that are capable of strengthening the immune system. Intake of this vegetable could reduce the risk of osteoporosis.

Preparation of methanolic extract: Bok choy, Brassica rapa Chinensis was obtained from local department store, Coimbatore, Tamilnadu, India. The Fresh leaves were cleaned to remove adhering dust particles, washed under running tap water, and rinsed with distilled water. The leaves were shade dried and powdered. 15g of dried powder was extracted in 150ml of methanol for 6 hours using a series of soxhlet extractor. The extract was filtered through Whatmann No.1 filter paper. The filtered sample was concentrated and dried under room temperature, which is denoted as methanolic extract of Brassica rapa Chinensis. The extract yielded a green residue solid weighing 2.5g and was preserved in a refrigerator at 4°C until further experiments.

Fresh leaves were collected and cleaned to remove adhering dust particles, washed under running tap water, gently blotted dry between folds of tissue paper and 10g of the leaf sample was weighed, cut into small pieces and added to 100ml of methanol. The flask was stored in the dark with mild shaking for 24 hours. The mixture was then filtered through whatman no.1 filter paper. The extract was stored at 4oC until further experiments.

The leaf extract (10ml) was added to 90ml of 3mM silver nitrate (AgNo3) Solution. The experimented for the synthesis of the nanoparticles as elaborated below. The extent of nanoparticle synthesis was monitored by measuring the absorption at 400-600nm.

Confirmation of formation of silver nanoparticles:

The reduction of pure Ag+ ions was monitored by measuring the UV-VIS spectrum of the reaction medium after overnight incubation and after diluting a small aliquot of the sample into distilled water. Silver nanoparticles (AgNPs) are soluble in distilled water and the colour changes were observed visually. A yellowish brown coloration was noticed at the synthesis phase. The concentration of AgNP produced was measured using a Systronics UV double beam spectrophotometer (model 2201), at a resolution of 1 nm, between 200 and 800 nm using 10-mm-optical-path-length quartz cuvettes.

The animals were divided into 5 groups of five animals each. Lymphoma cancer was induced with (i.p) DLA (1×106 cells). The institutional animal ethics committee no. 659/02/a/CPCSEA approved the experimental design.

Group III: DLA induced+ treatment with methanolic extract of Brassica rapa Chinensis   (MEBRC) leaves at 800mg/kg body weight from the next day of the induction for 20 days orally.

Group IV:  DLA induced+ treatment with nanoparticles of methanolic extract of Brassica rapa Chinensis (MNBRC) leaves at 1mg/kg body weight from the next day of the induction for 20 days orally.

Group V:  DLA induced+ treatment with drug cyclophosphamide at 3mg/kg body weight from the next day of the induction for 20 days orally.

On 21stday the experimental animals were sacrificed after an overnight fast by decapitation for analysis of biochemical parameters and histological studies. The blood was collected, centrifuged and serum was used for the estimation of cancer and liver marker enzymes such as serum Aspartate aminotransferase (AST), Alanine transaminase (ALT) by the method of Reitman and Frankel 11., Acid phosphatase (ACP), Alkaline phosphatase (ALP) was determined by King and Armstrong 12, Lactate dehydrogenase (LDH) by King 13, γ Glutamyl transpeptidase (γGT) by Persijn and Vanderslik 14, 5’Nucleotidase and β-D-Glucuronidase by Campbell 15, β-D-Galactosidase by Kawai and Anno 16 and Cathepsin D by Biber17 were analyzed.

The liver tissue of each animal were dissected out and then fixed in buffered formalin for 12 hours and processed for histopathological examination. Four μm-thick paraffin sections were stained with hematoxylin and eosin for light microscope examination using conventional protocol. 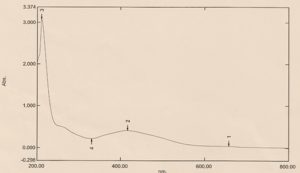 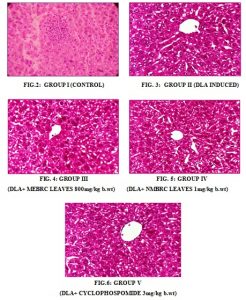 DISCUSSION: Longitudinal plasmon vibrations corresponding to AgNPs were convincing with UV spectral peak and with no absorption peak in control i.e. without reductant. In metal NPs, the conduction band and valence band lies very close to each other in which electrons move freely. These free electrons give rise to surface plasma resonance absorption band, occurring due to collective oscillation of electrons in resonance with light wave 18.

The magnitude of hepatic disease usually assessed by measuring the level of released cytosolic transaminases including ALT and AST in the circulation19. The rise in the serum level of ALP, AST and ALT as observed in the aqueous extract of Zizphus mauritiana fruit extract could be attributed to the damaged structural integrity of the liver, because these are cytoplasmic in location and are released into circulation after cellular damage 20.

AST predominantly found in mitochondria of hepatocytes. ALT is more specific to liver, and thus is a better parameter for detecting liver injury. Serum ALP is also associated with liver cell damage. The ALT, AST and ALP activity and serum bilirubin level are largely used as most common biochemical markers to evaluate liver injury 21, 22.

LDH is a protein that normally appears throughout the body in small amounts. Many cancers can raise LDH levels, LDH may be used as a tumor marker, but at the same time, it is not useful in identifying a cancer. Measuring LDH levels can be helpful in monitoring treatment for cancer. Noncancerous conditions that can raise LDH levels include heart failure, hypothyroidism, anemia, and lung or liver disease. LDH is often used as a marker of tissue breakdown as LDH is abundant in red blood cells and can function as a marker for hemolysis. A blood sample that has been handled incorrectly can show false-positively high levels of LDH due to erythrocyte damage 23.

Acid phosphatase (ACP) is found in different organs, and their serum levels are used to evaluate the success of the surgical treatment of prostate cancer. In the past, they were also used to diagnose this type of cancer. High or low enzyme expression is seen as part of the pathophysiological process. This observation suggests that ACPs could be diagnostically useful as serological and histological markers of disease, and could also be of use in the investigation of the pathophysiology of the associated diseases 24.

Plasma Gamma Glutamyl Transpeptidase (GGT) activity is higher in hepatocellular carcinoma. An increase in GGT activity paralleled with an increase in alkaline phosphatase activity is frequent in hepatocellular carcinoma. (Induction of GGT during hepatocarcinogenesis is frequent. An increased GGT activity causes resorption of GSH by preneoplastic foci rich in GGT that enhances cell proliferation and increases tumor promotion and favors transformation of preneoplastic foci to neoplasia 25.

5'-Nucleotidase has been reported to be altered in the sera of patients with solid tumors. In human lymphoid system, 5'-nucleotidase is anchored to the plasma membrane and has been described as an important marker for differentiation of B-lymphocytes. In our study, 5'-nucleotidase has been increased significantly in the serum, hepatoma, hepatoma bearing rats. Have demonstrated elevated activity of 5'-Nucleotidase in carcinoma of liver, gastrointestinal tract and pancreas 26.

β-D- glucuronidase is an enzyme responsible for the hydrolysis of glucuronides in the lumen of the gut. This reaction generates toxic and carcinogenic substances which are detoxified by glucuronide formation in the liver and then enter the bowel via bile. In this way, toxic aglycones can be regenerated in situ in the bowel by bacterial β-glucuronidase. In humans, fecal β-glucuronidase activity has been shown to be higher in colorectal cancer patients as compared to healthy individuals suggesting a role of this enzyme in carcinogenesis 27.

Cathepsin-D (CD) plays a major role in the digestion of extracellular matrix (ECM) components and is implicated in tumor invasion and metastatis. CD plays a proteolytic role in the digestion of the ECM components and plays a crucial role in tumor metastatis. In most breast tumors, CD is over expressed from 2-50 fold compared to its concentration in other cell types such as fibroblasts or normal mammary glands 29. CD is an independent prognostic parameter correlated with the incidence of metastatis, shorter survival times and poor prognosis of mammary cancer 30.

The present investigation showed increased levels of tumor marker enzymes in DLA tumor bearing mice. On treatment with Brassica rapa Chinensis leaves, the levels of the marker enzymes decreased and this may be due to the presence of secondary metabolites like phenolic compounds such as flavonoids, and other phytochemicals present in plant extract.

The Brassica rapa Chinensis leaves may be a useful antitumor agent which might be due to the presence of the secondary metabolites and other phytochemicals. It was proposed that the additive and synergistic activity of phytochemicals present in Brassica rapa Chinensis leaves might be responsible for its antitumour activity which can be inferred from the increased lifespan of DLA tumor induced mice.

ACKNOWLEDGEMENT: The authors are thankful to the Management of Kongunadu Arts and Science College, Coimbatore, Tamilnadu, India.