ABSTRACT:  In this pilot study, Zarrouk medium was optimized in terms of biomass production and metabolites for the culture growth of, Spirulina species; Spirulina maxima and Spirulina platensis and their extract were tested against a nosocomial fungal species Candida albicans (C. albicans) to explore anticandidal activity. The corresponding growth and metabolite were measured in terms of turbidity, chlorophyll, carotenoids and protein contents. The culture was harvested by centrifugation and extracted with 75% methanol by freeze thaw method. Supernatant was collected, evaporated to dryness and stored at -20 0C. Anticandidal activities were assessed based on the agar-well diffusion method. The lawn of C. albicans was maintained at 1.5×105 CFU/ml on Sarbourd dextrose (SD) agar plates under sterile conditions. The plates were dried at 37 0C for 30 min. Wells of 6_mm diameter were created by using sterile agar borer. The dried supernatants were dissoluted in normal saline (0.8% NaCl) and poured in each well (100µl); Control well carried 100µl normal saline. Poured wells were incubated for 18 h at 37 0C and after that measured the zone of growth inhibition. Anticandidal activity was found to be maximum in the dissolute of late stationary phase of S. maxima where in S. platensis dissolute was less effective. The study concludes that antifungal activity of Spirulina species should be explored on the basis of their metabolite structure and function which is needed to develop an effective edible fungicide in near future

Spirulina species belongs to the family Oscillatoriaceae are free floating, helical, multicellular and filamentous in shape.

The filaments are 50-300µ long and 10µ in diameter and non-nitrogen fixing, nitrate utilizing, whose biochemical machinery for nitrogen-metabolism resembles higher plants 4, 5. Spirulina species are found in diverse environment such as saline lakes, soil, marshes, brackish water, seawater, thermal spring and freshwater which is rich in bicarbonate and carbonate.  The optimum temperature for the growth of Spirulina species lies between 30 to 350C under laboratory conditions. However, previously it was reported that optimum growth temperature for Spirulina maxima (S. maxima) and Spirulina platensis (S. platensis) is ranging from 20 to 40 0C 6. The yield of Spirulina species is influenced by various environmental factors such as luminosity, temperature, inoculation size, stirring speed, dissolved solids, pH, water quality, and presence of macro and micronutrients such as C, N, P, K, S, Mg, Na, Cl, Ca and Fe, Zn, Cu, Ni, Co, Se etc.

The metabolites obtained from Spirulina species are involved in the production of various biologically active compounds. Spirulina has γ-linolenic acid which modulates inflammatory, immunological and cardiovascular responses 7. Anticandidal activity of Spirulina is under investigation by different groups of researcher, because Candida is causing lethal effects on humans. Candida is a fungus belonging to family Saccharomycetaceae having infectious effects resulting in the diseases called candidiasis and candidemia.

Certain species of Candida were found to be insusceptible to the common antifungal chemicals. Candida albicans (C. albicans) can cause infections such as, candidiasis or thrush, in humans and other animals, especially in immunocompromised patients 8. Due to limited medication against candidemia, we propose this study. It was meseared that Spirulina activity for different solvent extracts was differing. It was reported that butanol extracts show 13 mm (growth inhibition zone) activity against C. glabrata 9.  Allophycocyanin of S. platensis has antioxidant, anti-inflammatory and antiviral properties. It was also found that S. platensis and A. oryzae had anti-fungal activity towards the plant pathogenic fungi 10.

Antifungal activity of different extract of Spirulina was tested against Aspergillus niger 11. It has also been reported that a wide range of in vitro antifungal activities have been reported from extracts of green algae, diatoms and dinoflagellates. Spirulina like other microalgae, such as Ochromonas sp., Prymnesiumparvum, and a number of blue-green algae produce toxins that may have potential pharmaceutical applications 12, 13. 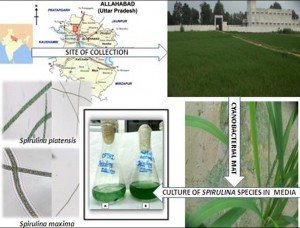 FIG. 1: SITE OF SAMPLE COLLECTION FROM PADDY FIELD IN MONTH OF NOVEMBER – 2012 AND CHARACTERIZATION OF S. MAXIMA AND S. PLATENSIS.

Organism and growth condition: The procured strains of S. maxima and S. platensis were cultured in Zarrouk medium 14 (Table 1). Growth and maintenance of the culture was done in an illuminated (75 µmol m-2s-1) growth room under 12/12 hour light-dark cycles at 27±2 0C. Shaking of culture was done 3-4 times daily.

Preparation of Spirulina cell extracts: The culture was harvested after 18 days by centrifugation at 5000g for 10 min., after centrifugation pellets of S. maxima and S. platensis were dried and collected for further use.  The pellets were crushed using pestle and mortar, extracted with 75% methanol by freeze thaw method. Supernatant was collected, evaporated to dryness and stored at -20 0C and dissolute was mixed with 10 ml normal saline (0.8% NaCl) and allowed for shaking for 15 min. The extracts in aqueous solvents used for bioassay of anticandidal activity.

Estimation of growth and metabolite:

Estimation of growth: Measurement of survival and growth of the test organisms i. e. S. maxima and S. platensis were estimated by spectrophotometry (UV-VIS-1700, Shimadzu, Japan). The absorbance of samples was recorded at 750 nm.

Estimation of protein: For protein estimation a definite amount of cell suspension was taken, centrifuged and 1N NaOH was added and the sample was kept on boiling water bath for 10 min. After cooling the reagents were added to the sample and the amount of protein was determined according to the method of Lowry 15. Amount of protein was calculated using a calibration curve prepared by using lysozyme solution in the range of 10 - 100 µg ml-1.

Chlorophyll estimation: Culture (5 ml) was centrifuged at 10,000g for 10 min in CPR 30 (Remi, India) and the pellets obtained were re-suspended in 100% methanol, mixed well and kept at 4 0C overnight for pigment extraction After 24 h samples were centrifuged, Chl a and carotenoids were extracted by following the methods of Porra 16 and Goodwin 17, respectively. The absorbance (UV-VIS-1700, Shimadzu, Japan) of pigment extracts was read at 665 nm for Chl a and at 450 nm for carotenoids. The amount of Chl a and carotenoids is expressed as µg ml – 1culture.

Culture of Candida albicans and assessment of anticandidal activity: Culture of C. albicans, American Type Culture Collection (ATCC) 90028 strain was obtained from the laboratory of Dr. Gopal Nath, Professor and Head, Department of Microbiology, Institute of Medical Sciences, Banaras Hindu University, Varanasi, India. Anticandida activity was assessed based on the agar-well diffusion method 18. The lawn of C. albicans was maintained at 1.5×105 CFU/ml on Sarbourd dextrose (SD) agar plates under sterile conditions.  The plates were dried at 37 0C for 30 min. Wells of 6mm diameter were created by using sterile agar borer. The above dried pellets were dissolute in normal saline (0.8% NaCl) and poured in each well (20, 40, 60, 80 and 100 µl) and control well carried 100µl normal saline. Poured wells were incubated for 18h at 37 0C and after that measured the diameter of growth inhibition zone. These test were performed in triplicate.

RESULTS AND DISCUSSION: There were few data available to anti-candidal activities of spirulina species on NCBI (Pub Med & PMC).  On to the topic of study “anti-candidal activities of spirulina species:  a possible approach and review for development of plant based antifungal” had also data was nil. Our pilot study results indicated towards prospective study will needed.

Organism and growth condition: In the present study we investigated the growth rate of S. platensis and S. maxima (Fig. 2) showing the lag phase lasted about less than 48 h, whereas the logarithmic growth started approximately after 48 h of inoculation and continued to the 16th day and thereafter reached at stationary phase. 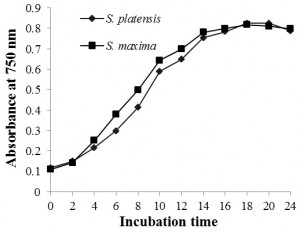 At this time, consumers are more focusing on plant products with antimicrobial properties and has become matter of intensive research 19. Significant, widespread sources of potentially important new drugs 8 have been reported from verity of habitats 20. In addition, algae are found to be most promising organisms for providing essential compounds for human sustenance 21. In recent drug research from naturally available sources imply that algae proved as a capable group to provide new biochemically active substances 22. Till date from the algal biomass a lot of biologically active substances been isolated 22, having antibacterial, antiviral, fungicide, enzyme inhibitor, immunosuppressive, cytotoxic and algicide activity 22, 23.

Since ancient times Spirulina has been used as a source of food because of its high nutritional value 24. The cyanobacterium S. platensis is rich in nutrients, such as proteins, vitamins, minerals, carbohydrates, and γ-linolenic acid. It is gaining more and more attention of researcher, not only for the foods aspects but also for the development of potential pharmaceuticals 25. S. platensis was also reported to have antimicrobial activity 26, 27.  Spirulina has gained an importance and international demand for its high phytonutrients value and pigments which have applications in healthy foods, animal feed, therapeutics and diagnostics 28. 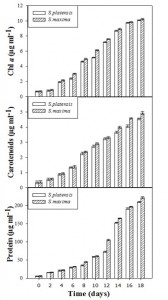 FIG. 3: CHL A, CAROTENOIDS AND PROTEIN CONTENT OF S. PLATENSIS AND S. MAXIMA

Assessment of Spirulina species anticandidal activity against C. albicans: In this prospective study anticandidal activity was found to be maximum in the dissolute of late stationary phase of culture of S. maxima (Table 2, Figure 4) whereas S. platensis dissolute was less effective. In our study different amount of dissolute of both species of Spirulina were poured in each well (i.e. 20, 40, 60, 80 and 100 µl) and control well carried 100 µl normal saline and it was also observed during study that 100µl/well has been found to be more effective than other which shows diameter of inhibition zone of C. albicans in mm 18.3±0.57 and 21.3±0.57 for S. platensis and S. maxima respectively.

FIG.4: PATTERN OF GROWTH INHIBITION ZONE (MM) OF S. PLATENSIS (A) AND S. MAXIMA (B) EXHIBITED AGAINST C. ALBICANS CULTURE.

In some of the study it was reported to investigate the antibacterial activity of different extracts of laboratory grown culture of S. platensis. The effectiveness of S. platensis in different solvent was studied such as petroleum ether, chloroform, acetone, and methanol extract against three dermatophytic fungi namely A. fumigates, A. niger, C. albicans and found out that the methanolic extract of S. platensis showed significant activity against A. fumigates 29.

They used different methods such as agar-well diffusion method 30, paper disc diffusion method 31, MIC (Minimal Inhibitory Concentration) and reduction in mycelial weight of fungi 32 to determine the antifungal activity of methanolic extract of S. platensis against A. fumigatus and ensured the S. platensis extract as a potential source of antifungal compound against fungal disease. A few studies have been done to screen antimicrobial substances from cyanobacteria from paddy-fields.  Cyanobacteria showed a defense mechanism by synthesizing highly active toxin against other microorganism existing in the environment like bacteria, fungi, viruses and eukaryotic microalgae 33.

In one of the study antifungal activity the strains of cyanobacteria belonging to family Nostaceae, Microchaetaceae and Scytonematacaea were isolated from the Argentinian paddy fields, against Staphylococcus aureus and C. albicans was reported 34. In Iran 150 strains of cyanobacteria were isolated out of which, 21 showed significant in vitro antibacterial activities and 13 of them had antifungal effect with the proportion of the isolates with antibacterial and antifungal activities were found to be approximately 14% and 9%, respectively 35.

CONCLUSION: Based on the results of our study, it is believed that dissolutes of Spirulina species can be used as antifungal drugs. Our study suggests that antifungal activity of Spirulina species needs exploration on the basis of their metabolite structure and function is develop an effective anticandidal agent in near future.