Categories Menu
Home » EVALUATION OF ANTICONVULSANT ACTIVITY OF THE LEAVES ETHANOLIC AND AQUEOUS EXTRACTS OF NYCTANTHES ARBORTRISTIS LINN. AGAINST SEIZURES INDUCED BY PENTYLENETETRAZOLE AND ELECTROCONVULSIVE SHOCK IN MICE

EVALUATION OF ANTICONVULSANT ACTIVITY OF THE LEAVES ETHANOLIC AND AQUEOUS EXTRACTS OF NYCTANTHES ARBORTRISTIS LINN. AGAINST SEIZURES INDUCED BY PENTYLENETETRAZOLE AND ELECTROCONVULSIVE SHOCK IN MICE

EVALUATION OF ANTICONVULSANT ACTIVITY OF THE LEAVES ETHANOLIC AND AQUEOUS EXTRACTS OF NYCTANTHES ARBORTRISTIS LINN. AGAINST SEIZURES INDUCED BY PENTYLENETETRAZOLE AND ELECTROCONVULSIVE SHOCK IN MICE

Nyctanthes arbortristis Linn. (Oleaceae) which has been used as an antiepileptic remedy in tribal people of India (Orissa and Bihar) along with its use in Ayurveda, Sidha and Unani systems of medicine was evaluated for anticonvulsant activity against experimental seizures. The leaves ethanolic and aqueous extracts of N. arbortristis protected mice against tonic convulsions induced by maximal electroshock and especially by pentylenetetrazole. Neurotoxicity (sedation and motor impairment) of the extract was assessed by the rota rod test. Preliminary phytochemical analysis showed the presence of alkaloids, tannic acid, flavonoids, iridoid glucosides and Desramnosylverbascoside in the extracts. The acceptable acute toxicity of the extracts recommends further studies to determine the mechanism(s) and compound(s) involved in the anticonvulsant activity

Nyctanthes arbortristis is an indigenous plant native of India, flourishing wild in sub-Himalayan regions ranges from the Chenabs to Nepal, Assam, Burma, Bengal, Central India like Chotanagpur, Rajasthan, Madhya Pradesh and South words to Godavari1. It is a small tree with a crooked trunk. Branches are quadrangular with opposite simple leaves, which are very rough to touch. In fact on this account the leaves are used as a sand paper for polishing wood. The fragrant, star like flowers arise in loose clusters, they bloom at night and fall on the ground below by morning2, it is cultivated in gardens almost throughout India for its fragrant flowers. In its natural habitat, it grows gregariously and covers dry steep hill sides and rocky grounds3. The decoction of leaves is extensively used by Ayurvedic physicians for the treatment of arthritis, obstinate sciatica, malaria, intestinal worms and as a tonic, cholagogue and laxative4, 5, 6, 7. The water-soluble portion of the alcoholic extract of leaves of N. arbortristis (NAT) has been reported to possess Anti-inflammatory activity in a variety of experimental models8. In addition, analgesics, antipyretic along with ulcerogenic potency have also been observed9. This plant has also been found to possess anti-allergic10, antimalarial11, 12, leishmanicidal13, 14, amoebicidal15 and anthelmintic16 activities.

In the present work, we have examined the possible protective effect of the leaves extracts of N. arbortristis against seizure induced by maximal electroshock (MES) and pentylenetetrazole (PTZ). In order to evaluate the therapeutic value and safety, the neurotoxicity (Sedation and motor impairment) and lethality of the extracts were determined as well.

Plant materials: The leaves of N. arbortristis were collected from the Bundelkhand University residential campus in the month of August 2007. N. arbortristis was authenticated by Dr. Tariq Husain; scientist & Head, Biodiversity & Angiosperm Taxonomy, National Botanical Research Institute, Lucknow, India, and a voucher specimen (no. 94113) was deposited in the herbarium of NBRI Lucknow, India.

Extract preparation: Air-dried leaves of the plant were extracted, in soxhlet with ethanol and distilled water for three days. The extracts were then filtered and the filtrates were concentrated with a rotary evaporator apparatus. The residues were then dried at vacuum oven (35 0C, -15mm Hg.). The final powdered crude extracts were maintained at 4 0C throughout experiments.

Drugs: Tween80 was purchased from E. Merck. PTZ, Phenytoin and Diazepam were purchased from Sigma (Poole, U.K.) both the extracts were suspended in distill water using 2% tween80 and subjected for anticonvulsant activity and muscle relaxant activity using MES, PTZ and rotarod models, respectively. Phenytoin, Diazepam and PTZ were dissolved in Normal saline (0.9% NaCl solution). All drugs were administered intraperitoneally (i.p.) in volume of 0.1 ml/10g and both the extracts were administered orally (p. o.) in the volume of 0.1 ml/10g of mice body weight.

Animals: Wistar Albino mice of the either sex weighing 23-35 gm. were used. The animals were housed in standard cages with free access to food (standard laboratory rodent’s chow) and water. The animal house (App. No.:- 716/02/a/CPCSEA) temperature was maintained at 23 ± 5.0C with a 12-h light/dark cycle (light on from 06.00 to 18:00h). The ethical guidelines for the investigation of experimental seizures in conscious animals were followed in all tests. All efforts were made to minimize animal suffering and to reduce the number of animal used17.

Acute toxicity tests: Acute toxicity studies were conducted by using albino mice of either sex weighing 23-35 gm and of 90 days age. The animals were fasted overnight prior to the experimental procedure. The method of Up and Down or staircase was used to determine the dose18, 19. The median lethal dose of the extracts having anticonvulsant activity was determined by administering 5, 50, 300, 2000, 5000, mg/kg. p. o. dose and percent mortality was observed 24 h later20, 21.

The time of peak effect of phenytoin as 30 min after administration was previously established25. The time for the extract to reach its maximum effect was determined as 60 min after oral administration. The orientation for the anticonvulsant effects was abolition of HLTE with in 10 sec. after delivery of the electroshock.

PTZ- Induced Seizure: The animals were divided into eight groups (n =5) and treated with (500, 1000, 1500 mg/Kg p. o.) of ethanolic and aqueous extracts and 2% tween80, (10 ml/Kg as control) and Diazepam (1 mg/kg.) They were all treated with PTZ at a dose of 80 mg/Kg (minimal dose needed to induce convulsion) was injected i. p. to induce tonic clonic convulsion in animals25 immediately after the injection of PTZ. Mice were observed for 30 min to detect the onset of spasm and generalized tonic clonic seizures and further up to 2h to detect mortality, if any26 Animals devoid of seizures were considered as protected27.

Rota rod evaluation:             The effect on motor coordination was assessed using Rota rod apparatus21, 28. Rotarod test was used to assess whether NAT caused Myorelaxation or gross motor impairment in the animals29 Pre-selected mice (animal that stayed for at least 2 min on the rotating bar, 24hrs. before testing) were placed on the horizontal rotating bar (diameter 2.5 cm, 12 r.p.m.) of the Rota rod apparatus (Biocraft Scientific Systems Pvt. Ltd., Agra, India) model number KI9616. 1 hr after the treatment of extracts orally30. The latency time to fall was recorded 30min after administration31, 32.

Under the present experimental conditions, NAT, ethanolic and aqueous extracts until 5000 mg/kg, p.o., did not produce mortality, nor the microscopic tissue injury or weight loss during the observation period (72 hrs.). Given that lethal effects were not observed at any of the administered doses, the oral LD50 of the ethanol and aqueous extracts estimated in mice must be > 5000 mg/Kg. p. o.

Table 4: Effect of ethanolic and aqueous extracts of NAT on Rota rod test in mice

Values are mean ± SEM, mice were pretreated with vehicle and NAT extracts orally 60 minutes before the Rotarod test, **= (p<0.01), n=5 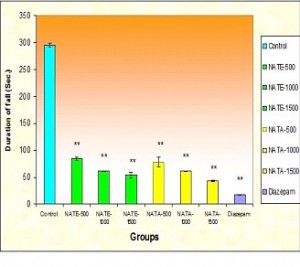 Current available anticonvulsant drugs are able to efficiently control epileptic seizures in about 50% of the patients; another 25% may show improvement whereas the remainder does not benefit significantly34. Furthermore, undesirable side effects from the drugs used clinically often render treatment difficult; so that a demand for new types of anticonvulsants exists. One of the approaches to search for new antiepileptic drugs is the investigation of naturally occurring compounds, which may belong to new structural classes. In the present study we have evaluated the effect of the leaves ethanolic and aqueous extracts of N. arbortristis on seizures induced by MES and PTZ in mice. The result indicates that both the extracts have an anticonvulsant effect, which is dose dependent. The ED50 values obtained for the NATE (1000, 1500 mg/kg b. wt.) indicate that it possesses more potent protective effect against NATA (1500 mg/kg b. wt.), in MES induced seizures against seizures induced by PTZ.

It has been stated that antiepileptic drugs that block MES-induced tonic extension act by blocking seizure spread35. Moreover, MES-induced tonic extension can be prevented either by drugs that inhibit voltage-dependent Na+ channels, such as phenytoin, valproate, felbamate and lamotrigine35, 36, 37, or by drugs that block glutamatergic excitation mediated by the N-methyl-D-aspartate (NMDA) receptor, such as felbamate38, 39.

On the other hand, drugs that reduce T-type Ca2+ current, such as ethosuximide can prevent seizures induced by PTZ40. This type of seizures can also be prevented by drugs that enhance gamma amino butyric acid type A (GABAA) receptor-mediated inhibitory neurotransmission, such as benzodiazepines and Phenobarbital and perhaps valproate and felbamate35, 36, 37. Some researchers have reported anticonvulsant activity of monoterpines. SL-1, a synthetic monoterpine homologue of GABA, demonstrated anticonvulsant activity in PTZ-induced seizures41. Linalool is another monoterpine compound which has protective effect against PTZ-, picrotoxin- and NMDA-induced convulsions42. Therefore, it seems that antiseizure profile of N. arbortristis leaves may be related in part to monoterpines and terpenoid compounds present in the leaves.

Results of the present study revealed that the ethanolic and aqueous extracts of N. arbortristis produces sedation and motor deficits at some anticonvulsant doses. The leaves ethanolic and aqueous extracts of N. arbortristis possesses protective effect against experimental seizures induced by MES and PTZ. It is showed that ethanolic extract is more favorable in MES-induced seizures. However, the exact mechanism(s) and the active compound(s) involved in these effects need to be clarified in future studies.