ABSTRACT: Herbal and natural products of folk medicine have been used for centuries in every culture throughout the world. Scientists and medical professionals have shown increased interest in this field as they recognize the true health benefits of these remedies. Spinach is a leafy green vegetable that came originally from south-western Asia and is now grown in most parts of the world. Scientifically it is known as Spincia oleracea Linn. (Family-Chenopodiaceae).  It is a good source of the bioflavonoid quercetin with many other flavonoids which exhibits anti-oxidant, anti-proliferative, anti-inflammatory, antihistaminic, in addition to its many other benefits. Treatment with Spinacia oleraceae (200mg/kg body wt) decreases the immobility time against forced swim test and tail suspension test. Fluoxetine (30mg/kg, i.p) was selected as reference standard and it showed significant antidepressant activity in rodents. Results suggest that Spinacia oleraceae exerts anti-depressant activity as shown by its effects on different experimentally induced different models.

INTRODUCTION:Depression is a serious disorder in today’s society with estimates of lifetime prevalence as high as 21% of the general population in some developed countries. As a therapeutic alternative, effective herbal drugs may offer advantages in terms of safety and tolerability, possibly also improving patient compliance 1.

Even though many medications are available the risk of relapse and reoccurrence remains high. Thus, there is a need for more effective and less toxic agents.

Preliminary phytochemical studies showed the presence of Saponins, Tannins,Alkaloids, Phenols, flavonoids, glycosides and carbohydrates. Since the spinach has not been examined for their antidepressant activity hence the present study has been undertaken to evaluate the anti-depressant activity of Spinacia oleraceae against FST and TST.

MATERIALS AND METHODS: Theplant was collected from local market of Bhongir. It was identified and authenticated by Prof. A. Lakshma Reddy, Retired Professor, Dept. of Botany, Nagarjuna Govt. College (Autonomous) Nalgonda. The plant herbarium was prepared and deposited in the Department of Pharmacognosy for further reference. The plant was identified as Spincia oleracea Linn. (Family-Chenopodiaceae) under the voucher no: SSCP/2012-2013-001.

Extraction: Leaves were washed, air dried under shade and powdered with the help of grinder. Powder was weighed and packed in Soxhlet. Solvent used for Soxhletion was in the order of increasing polarity. Soxhletion was continued at the temperature of 50oC till clear solvent was observed in siphon tube. Extract was collected in water bath at 40oC. Concentrated extract was dried at 40c in hot air oven. Dried extract was packed in air tight container.

The extract so obtained was subjected to various chemical tests as per the procedure mentioned in the standard reference books to determine the nature of chemical constituents present in the plant.

Animals: Wistar albino rats (150-200 g) of either sex and of approximate same age used in the present studies were procured from listed suppliers of Sri Venkateswara Enterprises, Bangalore, India. The animals were fed with standard pellet diet and water ad libitum. All the animals were housed in polypropylene cages. The animals were kept under alternate cycle of 12 hours of darkness and light.

The animals were acclimatized to the laboratory conditions for 1 week before starting the experiment. The experimental protocols were approved by Institutional Animal Ethics Committee (IAEC) after scrutinization. The animals received the drug treatments by oral route as well as intra peritoneal.

Experimental design: On the day of the experiment, the animals were divided randomly into control and experimental groups (n=6). Group 1 received the vehicle, 5% gum acacia (10ml/kg) and served as the control group, groups 2 and 3 received the test drugs in doses of 200mg/kg, and group 5 received the standard drug fluoxetine (10mg/kg) i.p. Drugs/vehicle was administered to the animals 60 minutes prior to the behavioral evaluation in acute study.

The antidepressant activity of the test drug was evaluated using the following experimental models of depression TST and FST:

Tail Suspension Test (TST) 15: The animals were hung by the tail on a plastic string 75 cm above the surface with the help of an adhesive tape. The duration of immobility was observed for a period of 8 minutes. The duration of immobility was recorded during the last 6 minutes of the observation period. Mice were considered to be immobile only when they hung passively and were completely motionless.

Forced Swim Test (FST) 16: Each animal was placed individually in 5 liter glass beakers, filled with water upto a height of 15 cm and were observed for a duration of 6 minutes. The duration of immobility was recorded during the last 4 minutes of the observation period. The mouse was considered immobile when it floated motionlessly or made only those moments necessary to keep its head above the water surface. The water was changed after each test.

Statistical Analysis: The mean±S.E.M. values were calculated for each group. The data were analyzed using one-way ANOVA followed by Dunnet’s multiple comparison test. P< 0.001 was considered to be statistically significant. 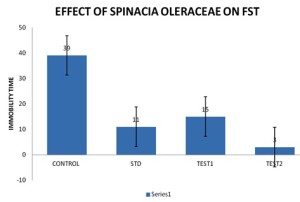 Tail suspension test: In tail suspension test, the ethanolic and aqueous extracts of leaves of Spinacia oleraceae at a dose of 200 mg/kg p.o. significantly decreased the immobility time (fig. 2). The magnitude of the antidepressant effects of 200 mg/kg p.o. of ethanolic and aqueous leaves of Spinacia oleraceae was comparable to that of fluoxetine 10 mg/kg i.p. (Table 3). 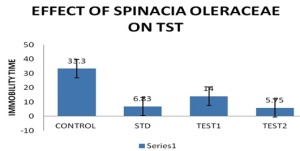 DISCUSSION: The widespread use of FST is mainly due to its ability to detect a broad spectrum of antidepressant agents.The test is based on the observation that rodents following initial escape‐oriented movements develop an immobile posture when placed inside an inescapable cylinder filled with water. The immobility is thought to reflect either a failure of persistence in escape‐directed behavior (i.e., despair behavior) or the development of a passive behavior, meaning the loss of the animal's ability to cope with stressful stimuli. Markedly showed a significant decrease in the time spent immobile by rodents. By performing tail suspension test, the reduced immobility time directed the antidepressant effect. Antidepressant effects may be due to the flavonoid 17.

Flavonoids glycosides are mostly hydrolyzed into their aglycons by mucosal and bacterial enzymes in the intestines, and then converted to conjugated metabolites during the absorption process 18, 19. .Transportation of these metabolites into the brain tissues via the blood brain barrier and their effect on the central nervous system (CNS) has been recently argued 20, 21.

Therefore, one of the antidepressant mechanism of Spinacia oleraceae is thought to involve flavanoids and glycosides which reach the brain tissues through the metabolizing process, protecting brain function from CNS disturbance and consequently, exerting an antidepressant effect. Thus, extracts of Spinacia oleraceae may have potential therapeutic value for the management of depressive disorders.

However, further studies are required to identify the phytoconstituents responsible for the observed anti‐depressant effect.

ACKNOWLEDGEMENTS: The authors would like to thank Sri Sarada College of Pharmacy, for providing necessary facility for the successful completion of the research work. Further, the authors wish to extend their gratitude to the anonymous reviewers for their valuable comments in improvising the research article.