INTRODUCTION: Echinochloa colona, regularly known as jungle rice, deccan grass, or awnless farm grass, is a sort of wild grass beginning from tropical Asia. It was some time ago delegated types of Panicum. It is the wild precursor of the developed grain crop Echinochloa frumentacea, sawa millet. A few taxonomists treat the two taxa as one animal group, in which case the trained structures may likewise be alluded to as E. colona 1, 3. 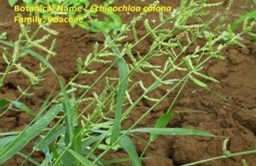 Botanical Description: Echinochloa colona (Poaceae), commonly known as Jungle rice (awnless barnyard grass) in India, is a yearly upright or decumbent, scattering, rooting from the inferior cutline node. It is a terrestrial, tufted, and erect grass propagates vegetatively but mostly by seeds, extensively spread in tropics & subtropics. It is also observed in South-Southeast Asia and tropical Africa. Leaves are spiral; alternatively, sessile linear more than 2 cm long, apex is acute with clasping base and parallel-veined. It culms ascending, or decumbent 10-100 cm long 4.

Macroscopy: Culms are 10-70 cm long, lower nodes are glabrous and upper nodes are glabrous. Sheaths are glabrous, ligules absent, blades are 8-10 cm long and cm-3-6 wide. Panicle is cm-2-12, erect, rachises. A primary branch is 5-10 cm, erect otherwise ascending, spike-like, distant, devoid of secondary branches, axes glabrous or sparsely hispid. Spikelet is 2-3 mm, disarticulating at maturity, pubscent to hispid. Lower glumes are as long as spiklets; lower florest are sterile occasionally staminate. Lower lemmas are unawned, upper lemmas are 2.6-2.9 mm. Anthers are 0.7-0.8 mm, caryopses are 1.2-1.6 mm, whitish, and embryos are as long as caryopses. It is distributed in tropical and subtropical areas. It is weedy in North America grown in low-lying, damp to wet, including rice fields. Un branched somewhat widely-spaced panicle branches, which make this one of the easier species of the Echinochloa colona.

Traditional Uses: As per the literature, in India, seeds of grass are used to prepare a food dish called khichdi and are consumed during festivals, fasting days. The whole plant is used as fodder by grazing animals, and it cures ingestion. Echinochloa colona, is a significant crop. It is a reasonable wellspring of protein, which is exceptionally edible; furthermore, it is a fantastic wellspring of dietary fiber with great measures of solvent and insoluble portions. The starch content is low and gradually edible, which makes the Echinochloa colona, a characteristic fashioner nourishment. In the current long periods of expanded diabetes mellitus, E. colona, could turn into perfect nourishment.

Sample Preparation: E. colona samples were collected from a paddy field in Dharmapuri, Tamil Nadu, India province in June 2013 at the flowering stage (red-purple flower). The samples were cleaned and separated into roots and shoots, then air-dried at room temperature and cut into small pieces (5 mm). The E. colona samples were extracted using soxhlet extraction methods, previously soaked with n-hexane to remove fatty residue. Then ethanol extract was fractionated (chloroform, acetone, ethyl acetate, ethanol, and methanol) from low to high polarity solvents. The plant parts were extracted using solvent at the rate of 1:5 (w/v) in 1 L beakers and covered with plastic film. The detailed procedure regarding the extraction was described by Gomaa and Abd Elgawad (2012). The beakers were kept in the dark at room temperature for 7 d. The solutions were separated from plant residues and evaporated using a rotary evaporator at 600 °C under reduced pressure. There were six different extracts of E. colona from the shoots and roots using n-hexane, extracts from the shoots and roots using chloroform, acetone, ethyl acetate, ethanol, and methanol.

Column Chromatography: The chloroform fraction of Echinochloa colona was subjected to column chromatography using silica gel as it has shown better pharmacological effect comparing to ethyl acetate and ethanol fraction and eluted with solvent mixtures of increasing polarity.

While elution, the chromatographic fractions were collected and monitored on TLC. All the fractions showing a single spot were pulled together, purified, and observed for its Rf value using TLC. The solvents like chloroform, acetone, ethyl acetate, ethanol, and methanol used for separation 5.

Chromatographic Separation of Chloroform Fraction: Slurry of activated silica gel (150 °C for 3 h) was prepared with chloroform, and then the column was packed with slurry. The sample was loaded on the packed silica gel. After stabilization column was eluted with mobile phase. Fractions were collected and analyzed by TLC.

Column Packing: A clean and dry borosil glass column (60 cm, height; 3 cm, diameter) was aligned in a vertical position with the help of clamps attached to metal stand. A piece of cotton soaked in the mobile phase was positioned at the bottom of the column and quietly tamped down by means of a glass rod. The column was then filled about 1/3 volume by the mobile phase. The column was slowly and evenly filled, about 5/6 volumes full with the gradual addition of silica gel slurry. The stopcock was opened to allow the excess mobile phase to drain into the beaker. The side of the column was softly tapped with a cork during the process of packing to compact the silica gel. In the meantime, the stopcock was opened to run down the excess mobile phase. When the packing was finished, the excess mobile phase was drained until it just reaches the top level of silica.

Anti Diabetic Activity: Anti-diabetic effect of chloroform, ethyl acetate, and ethanol fractions obtained from ethanolic extract of Echinochloa colona was performed using streptozotocin-induced diabetic model in Wistar rats. The doses of the fractions were made at 50 mg /mL. All male Wistar rats (150-200 g) were randomly divided into 7 groups, each containing 5 rats 8, 10.

The standard drug and test samples were fed orally with an intragastric tube for 24 h experiment. Diabetes was induced (Group III-VII) by intraperitoneal injection (1 mL/kg) of freshly prepared streptozotocin (45 mg/kg), after baseline glucose was estimated.

After 48 h, blood samples were collected from the tail vein of all rats, and the blood glucose level was estimated. Blood glucose levels above 11. 1 mmol/L in animals were selected for the studies considering the condition of diabetes was established.

Biochemical Analysis: After treatment, blood samples were collected with the help of disposable syringes from the tail vein of all rats of all groups before and at 0, 1, 2, 3, 6, 10, 16, and 24th h and analyzed for content of blood glucose using Glucometer (Bio Land, Germany). Then all the rats were sacrificed, and approximately 1-2 mL of blood was collected directly from the heart with the help of disposable syringes.

Method: CHOD-PAP method was used described by Allain et al., 1974. It is an extremely specific enzymatic colorimetric method for measurements in the visible range (505 nm), well-known for its high flexibility 14, 15.

H2O2 then reacts with 4-aminoantipyrine (AAP) and phenolic compounds in the presence of peroxidase to give colored complex red at 505 nm (500-540 nm, GREEN filter). The color intensity produced is directly proportional to the concentration of total cholesterol in the test samples.

Procedure: The three tubes were labeled accordingly as blank, standard, and test. 0.01ml standard and serum were added to the corresponding tubes. 1 mL Cholesterol reagent was placed in all tubes, i.e. blank, standard, and test, mixed well, and incubated (10 min at 37 °C). Then absorbance was red of test and standard at 505 nm or with green filter against blank reagent.

Hydrogen peroxide in presence Peroxidase (POD) oxidised to oxidise 4 amino antipyrine and chlorophenol to a pink coloured complex, which is measured at 546 nm (500-550 nm or with green filter). Absorbance is proportional to Triglycerides concentration.

Procedure: 0.05 mL serum, standard, and distilled water were placed in the tubes marked as a test, standard and blank, respectively.

Elution: Elution was carried out with the flow rate (1 ml/min). The mobile phase was added at the top of the column from the solvent reservoir, and fractions were collected in an amber colored bottle.

Fractions were concentrated by evaporating at room temperature until volume was reduced to ¼ of the total volume. TLC of concentrated fractions was carried out to detect similarity between the chromatograms of different fractions.

Characterization of the Isolated Compounds from E. Colona:

The above spectral data suggested isolated compound is 2, 3, 4-trihydroxy, 6-methyl benzoic acid. The IR, 1HNMR, and MASS spectra were shown in following Fig. 1 to 3. 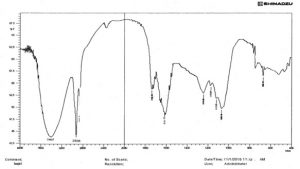 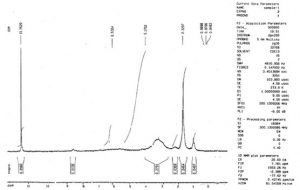 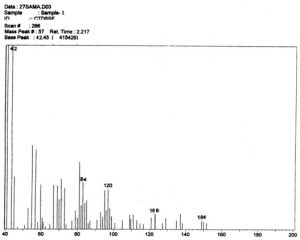 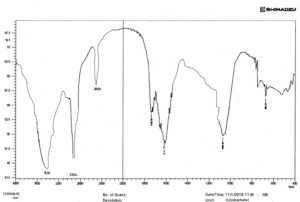 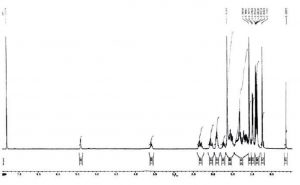 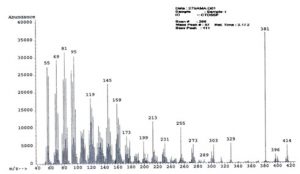 EC-III: The EC-III fraction was collected at 10:90 in % ratio of (CHCl3:C2H5OH). The isolated compound was white crystalline powder with a characteristic odour. The compound was studied for its qualitative properties and found to be positive with the ester test, and the ester nature of the compound was confirmed.

The above spectral data suggested isolated compound was ethyl 3, 4, 5-trihydroxy benzoate. The IR, 1HNMR, and MASS spectra were shown in the following Fig. 7 to 9. 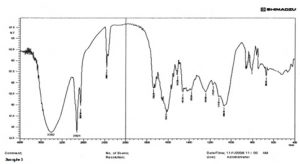 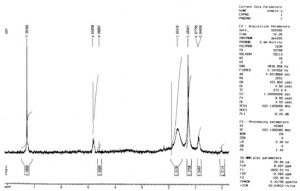 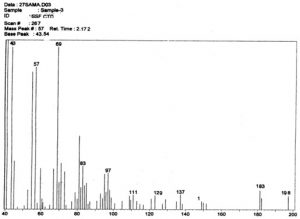 Effects of Various Fractions on Blood Glucose: A decrease in blood glucose level was observed in animals treated with different fractions of E. colonaat 0, 1, 2, 3, 6, 10, 16, and 24th h Fig. 1.

TABLE 1: EFFECT OF DIFFERENT FRACTIONS OF E. COLONA ON BLOOD GLUCOSE IN DIABETIC RATS ON ONE DAY TREATMENT

All values are expressed as mean ± SEM, (n=5) in every group, p<0.01, p-values were calculated and compared with control by ANOVA method followed by Dunnett’s test 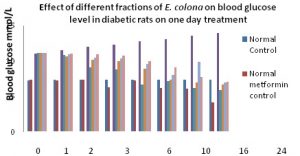 FIG. 10: EFFECT OF DIFFERENT FRACTIONS OF E. COLONA ON BLOOD GLUCOSE LEVEL IN DIABETIC RATS ON ONE DAY TREATMENT

All values are expressed as mean ± SEM, (n=5) in every group, *p <0.01, considered extremely significant, p-values were calculated and compared with control by ANOVA method followed by Dunnett’s test. 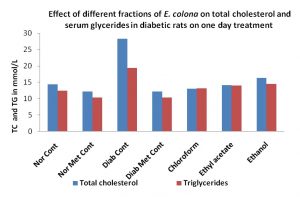 FIG. 11: EFFECTS OF DIFFERENT FRACTIONS OF E. COLONA ON TOTAL CHOLESTEROL AND SERUM GLYCERIDES IN DIABETIC RATS ON ONE DAY TREATMENT

CONCLUSION: Given the potent results of the extracts tested in this article against diabetes and the factor responsible for the same (triglycerides). A decrease in blood glucose level was observed in animals treated with different fractions of E. colona.

CONFLICTS OF INTEREST: The authors have not declared any conflict of interest.