The present study was designed to determine the antidiabetic activity of the methanol: ethyl acetate (1:9) extract of flower buds of Peltophorum pterocarpum on alloxen and glucose indueced diabetic mouse model. The extract was given intraperitonially at a dose of 200 mg/kg body weight and the hypoglycemic effects compared with metformin, a standard drug. The extract reduced blood glucose level in alloxan-induced diabetic mice by 60.40%, and 65.48% reduced by metformin at 12 hours in 24 hours treatment period. Preliminary phytochemical screening of the extract revealed the presence of different types of compounds including flavonoids and steroids. Our results suggest that Peltophorum pterocarpum has potential antidiabetic activity and may provide new molecules for the treatment of diabetes.

INTRODUCTION: Diabetes is a chronic metabolic disorder that is characterized by either the insufficient production or the lack of response to a key regulatory hormone of the body’s metabolism, insulin. Diabetes has correctly been labeled as the “silent epidemic” - its non-dramatic, insidious and chronic nature often masks the menace inflicted by the disease through death, incapacitation, and negative impact on quality of life of patients as they spend years coping with their life-changing affliction.

It is the most prevalent disease in the world affecting 25% of population and afflicts 150 million people and is set to rise to 300 million by 2025 1. Unfortunately there is no proper drug for the treatment of diabetes.  So, research is going on to find out safe and effective natural antidiabetic agents from plant species (WHO, Traditional Medicine strategy 2002-2005, World Health Organization, Geneva, 74).

In this study, our attention has been focused on Peltophorum pterocarpum is known as Radhachura belongs to the family Fabaceae, native to tropical southeastern Asia and a popularly ornamental tree grown around the world. P. pterocarpum is a deciduous tree usually reaching a height of 15m. The leaves are bipinnate, 30-60 cm long and the flowers are yellow in color. It is a widely-appreciated shade and shelter tree due to its dense spreading crown and wind firm. In traditional medicine it is used as an astringent to cure or relieve intestinal disorders after pain at childbirth, sprains, bruises and swelling or as a lotion for eye troubles, muscular pains and sores 2. It is also used for gargles and tooth powders. The leaf and bark of this plant were reported to contain phenolic compounds that showed antibacterial 3 and antioxidant activity 4-6. But there is no antidiabetic investigation of this plant reported.

This study was thus undertaken to evaluate folkloric reputation of hypoglycemic effect with methanol: ethyl acetate (1:9) extract of flower bud of P. pterocarpum and make a correlation ship between antioxidant and antidiabetic activity of the plant extract.

Preparation of Extract: Dried flower buds of P. pterocarpum were ground in a mill. One hundred grams of powder was extracted three times by sonication for 30 min with methanol: ethyl acetate in the ratio of 1:9 (1000ml) and then filtered. Filtrate was concentrated by vacuum evaporator and dried and stored in desiccators at cool place.

Drugs: Alloxan was purchased from Sisco Research Laboratories Pvt. Ltd. Mumbai, India and used for the induction of diabetes. The active drug, metformin hydrochloride was collected from Square Pharmaceuticals Ltd., Pabna Plant. All other chemicals used were of analytical grade.

Preparation of Dose: Diabetes was induced with a single dose alloxan (80 mg/kg b. w., i.p.) in sterile saline water. 200 mg/kg (b. w.) extract of flower bud of P. pterocarpum was used for testing antidiabetic activity and all doses were administered intraperitoneally after dissolving in dimethyl sulfoxide (DMSO) vehicle. Standard drug metformin was injected in the same route at the dose of 150 mg/ kg b. w.

Effect of Extract on Alloxan Induced Diabetic Mice: In the experiment, a total 20 Swiss Albino mice about 20-25 gm; 4-6 weeks were used and divided randomly into four groups (five mice in each group). Treatment was done for 24 hrs as follows

Group II – IV received a single dose of alloxan (80 mg/kg i.p.) after overnight fasting. Group-I received only DMSO as negative control group and Group-II was positive control group, which did not receive either metformin, or plant extract. Metformin and extract were injected intraperitoneally to the respective groups after five days of alloxan injection and  blood samples were analyzed for blood glucose content at 0, 2, 6, 12, 16 and 24 hours respectively  using a glucometer kit (Accu-Check active, Roche Diagnostic GmbH, Mannheim, Germany). Fasting blood glucose level of 16 to 17 mmol/L were considered diabetic and included in the study 5.

After fasting for overnight, a baseline blood glucose level was estimated (0 minutes). Without delay, a glucose solution (2 gm/kg b. w.) was administered by gavages from Group-2 to Group-4. At the same time Group-3 received standard drug and Group-4 received plant extract intraperitoneally. Five more blood samples were taken at 30, 60, 90, 150, 270 minutes after glucose administration and blood glucose level was estimated in all the experiments by using glucometer.

Statistical Analysis: The experimental data are presented as the means ± SEM. The differences between the groups were considered as significant at *P<0.05 by student’s T-test and Tukey’s test using GraphPad Prism version 4.00 for Windows (GraphPad Software, San Diego, CA, USA, www.graphpad.com).

General Test for Different Compounds: Phytochemical tests have been performed according to the literature by Nayak and Pereira 10.

RESULTS: The results for methanol: ethyl acetate (1:9) extract of flower bud of P. pterocarpum on alloxan induced diabetic mice as to lowering fasting blood glucose (FBG) showed significant differences as compared to the diabetic control group. The effect of single intraperitoneal dose of the extract on the blood glucose level both in alloxan and glucose induced diabetic mice are summarized in Table 1 and 2 and the results are shown in Figure 1 and 2. Administration of alloxan (80 mg/kg i.p.) and glucose (2 gm/kg bw) led to approximately 3 and 2 fold elevation of blood glucose levels in the mice.

Treatment was done in alloxan induced model for 24 hours in which maximum reduction in blood glucose level (60.40%) was seen at 12 hours whereas highest reduction 60.39% observed at 150 min in the experimental period of glucose induced hyperglycemic model comparing diabetic or alloxan control group. Metformin showed maximum reduction 65.48% and 65.01% at the same time obtained for extract in alloxan and glucose induced mice respectively. Blood sugar levels were then raised slightly for both extract and metformin treated mice group till observation probably due to loss of their duration of action. So, the flower bud extract has considerable hypoglycemic activity considering the blood sugar level in standard and diabetic control mice in both diabetic models. 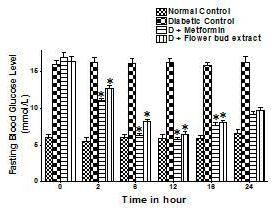 The results are expressed as mean ± SEM 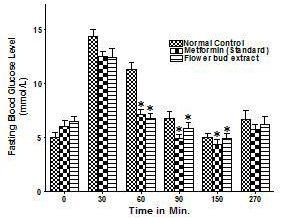 However, plant therapy used for a long time as an alternative treatment to control metabolic disease associated with healthcare cost. P. pterocarpum has a folkloric reputation for the treatment of diabetes and in this study this reputation was evaluated on alloxan and glucose induced diabetic mice.

Our study have shown that methanol: ethyl acetate (1:9) of flower bud extract of Peltophorum pterocarpum has significant effect in lowering fasting blood glucose level in alloxan and glucose induced diabetic mice. Our preliminary phytochemical analysis has indicated that flavonoids and steroids have been reported to exert potent hypoglycemic effect. Further comprehensive pharmacological and phytochemical investigations are needed to elucidate the exact chemical compounds responsible for antidiabetic activity and their mode of action.