ABSTRACT: During the past few years, diabetes has been one of the leading metabolic disorders. It occurs when the body does not produce enough insulin or the body cells are not efficient enough to take up the insulin. This increases blood glucose levels that affect the body system, particularly blood vessels and nerves. Due to the side effects of allopathic medicines, individuals are searching the other alternatives with lesser side effects and more efficacy. Such properties are present in plant-based product. Picrorhiza kurroa Royle ex. Benth. belonging to the family Plantaginaceae/Scrophulariaceae distributed in Himalayan regions of China, Pakistan, India, Bhutan and Nepal. The tribes of North–Eastern Himalayan regions of India use this herb as for controlling diabetes. The present study was conducted to evaluate the antidiabetic activity of ethanolic extract of P. kurroa in-vitro and in-vivo. In-vitro antidiabetic activity was done by inhibiting the alpha-amylase enzyme, which is hydrolyzing enzyme for the starch by plant extract. In-vivo antidiabetic activity was done by injecting alloxan monohydrate (120 mg/kg bw) to male Wistar rats and which were given plant extract (60 mg/kg bw) orally for 14 consecutive days. The treatment shows a significant reduction in blood glucose levels and also in lipid profile levels. The IC50 value for plant extract was reported to be 73.52 µg/ml, and for positive control, it was 184.54µg/ml. The results showed that plant extract of P. kurroa shows promising results in-vitro and in-vivo for the treatment of diabetes.

In 2011, an estimated 366 million individuals (8.3% of grown-ups) suffered from diabetes all over the world. This figure was expected to go up to 552 million individuals by 2030. Around the world, the percentage of type 2 diabetes is greater than 90% 1. Therefore, it is important to discover new ways to manage this well-being challenge.

One objective of treatment for diabetic patients, especially type 2, is the support of ordinary postprandial blood glucose levels. Postprandial hyperglycemia (glucose level) plays a vital role in improving type 2 diabetes and complications related to this disease. The main defect found in type 2 diabetes is that cells become insulin resistant or less responsive to it, which brings about weakness in the insulin flagging pathway and reduced glucose uptake in target tissues like muscles and fats. At present, treatments to treat diabetes include incorporating insulin and different oral antidiabetic operators, such as sulfonylureas, biguanides, and glinides. Despite the impressive development in the treatment of diabetes by oral hypoglycemic operators, there is a need for new medications since existing medications have a few impediments what's more destructive impacts. It has been accounted for that treatment with plant extracts encourages actuation of β-cells, regranulation, and insulinogenic impacts 2.

Picrorhiza kurroa (family Scrophulariaceae) is a perennial herb which grows wild in alpine regions in Himalayas. It commonly grows in rock crevices and also in organic soils. The leaves of P. kurroa are basal and alternate, approximately 5-10 cm long and possess a thick, subcylindrical, straight-elongated rhizome that may be curved to some extent. This plant flowers from June to September produce pale-blue, showy flowers arranged in dense terminal racemes Fig. 1. The root powder decoction is used twice a day for the treatment of diabetes. 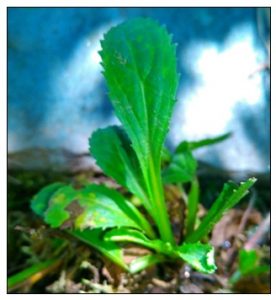 MATERIALS AND METHODS: Field trips were undertaken to collect the plant material during its flowering season i.e. between May-September. Local herbal healers, elderly individuals, shepherds and vaids were contacted to gather the information related to the various antidiabetic plants of the region. The information gathered includes the local name of the plant, part of the plant used, mode of preparation and consumption of the drug.

The plant was collected from Jagatsukhin Kullu district of Himachal Pradesh. The plants were first thoroughly washed with tap water and then with distilled water to prepare the plant extract. The washed plants were shade dried for 4 days and then powdered in a grinder. The powdered plant material was stored in air-tight plastic bags at room temperature, away from the light. Twenty-five grams of powder was added to 50 ml of 70% ethanol and kept on a shaker for 24 h. After that, the extract was filtered through Whatman filter paper and the filtrate was evaporated at room temperature. The remaining residue was stored at 4 °C for future utilization. This filtrate was used for the investigation of its antioxidant and antidiabetic potential.

Preliminary Phytochemical Screening: The phytochemical screening of P. kurroa was done by the given procedure of Trease and Evans 3; Siddiqui and Ali 4.

In-vitro Study of Antidiabetic Activity: The alpha-amylase inhibition assay was adopted and modified from Confortiet al 5. The enzyme solution was prepared fresh by dissolving 0.001 g of alpha-amylase in 100 mL of 20 mM sodium phosphate buffer (pH 6.9).

Animal Ethical Clearance: The research proposal was approved by the Institutional Animals Ethics Committee (IAEC), Central Animal House, Panjab University, Chandigarh (Regd.No.45/99/CPCSEA; Dated: March 11, 1999), and all the protocols for the investigation was also approved by IAEC.

Animal Procurement: 8-10 weeks older male Wistar rats were used for in-vivo study. The rats were obtained from Central Animal House Panjab University Chandigarh (45/99/CPCSEA). The rats were employed to assess the antidiabetic activity, and the lipid profile was checked. Rats were housed in a clean cage.

Experimental Induction: The rats fasted for 16-18h before the induction of diabetes 6.

Experimental Design and Preparation of Dose: Four groups of rats, 5 in each group, were given the following treatment.

Change in body weight % and glycemic change % after 14th days were calculated by the formula 9.

Biochemical Studies: At the end of the 14th day of the experiment, blood samples were collected, and serum was separated and used further for biochemical estimation. The level of total cholesterol 10, Triglyceride 11, HDL 12, VLDL and LDL 13 was measured.

Histopathological Observations: Pancreas were collected in 10% of formalin solution, and the sections were stained with hematoxylin-eosin stain, and further observations were made.

Statistical Analysis: The values for body weight, blood glucose level, and biochemical estimations were expressed as Mean±SEM of five replicates and analyzed by one-way ANOVA using SPSS version 16.0 followed by Dunnet’s test. The values when P≤0.05, were considered statistically significant.

In-vitro Antidiabetic Activity: The alpha-amylase inhibitory activity by ethanolic rhizome extract of P. kurroa and acarbose investigated at different concentrations i.e 50, 100, 150, 200 and 250 µg/ml. The IC50 value for ethanolic extract of P. kurroa was found 73.52 µg/ml. Our positive control i.e acarbose showed an IC50 value at concentration of 184.54 µg/ml as shown in Table 1 and Fig. 2.

Values are expressed as Mean± SEM of three replicates. 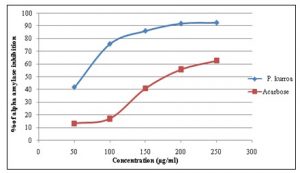 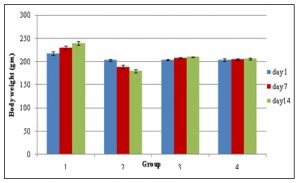 Effect on Average Blood Glucose Level: In diabetic control untreated group the % of glycaemic change was increased by 22.87 and in P. kurroa extract, it was reported to be reduced by 53.47 Table 3 and Fig. 4. 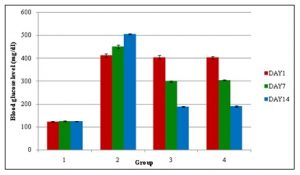 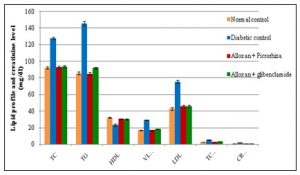 FIG. 5: DIFFERENCE IN THE SERUM LIPID PROFILE LEVEL AND CREATININE LEVEL IN ALLOXAN-INDUCED DIABETIC RATS WHEN TREATED WITH ETHANOLIC EXTRACT OF P. KURROA. Each value represents 5 observations of mean± SEM. 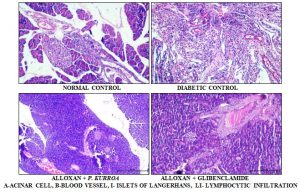 DISCUSSION: The present study was conducted to find out the possible antidiabetic potential of ethanolic extract of P. kurroaas; this plant is used by the local people of Kullu district of Himachal Pradesh. The ethanolic extract of P. kurroa extract was reported to have an inhibitory effect on alpha-amylase, an enzyme that breaks down starch into more simple sugars. The alpha amylase inhibitors can postpone the starch absorption and diminish the rate of glucose retention 14. Thusly, they can diminish the weakened postprandial plasma glucose levels and enhance glucose resilience in diabetic patients. The percentage of alpha-amylase inhibition by the plant extract was reported to be 41.78% and for acarbose (positive control) it was reported to be 13.35 %. At all the concentrations, the plant extract shows more inhibition as compared to the control. The IC50 value for P. kurroa was found to be 73.52 µg/ml, and for acarbose it was 184.54 µg/ml, which demonstrates it to be a more effective antidiabetic. Alpha-amylase inhibitors may be of great value as novel therapeutic agents 15. The plant extract of P. kurroahas can regenerate the beta cells of pancreas, increase the production of insulin, and hence help reduce blood glucose levels. The enzyme α-amylase is responsible for hydrolyzing dietary starch into maltose, breaking down to glucose prior to absorption. Beta-amylase inhibition significantly reduces postprandial glucose level in diabetic and borderline patients. The delay in carbohydrate absorption with a plant-based alpha-amylase inhibitor provides a therapeutic approach for the treatment of type 2 diabetes 16. The inhibition of the alpha amylase can be an important strategy for the treatment of diabetes 17, 18. The blood glucose level in P. kurroa treated extract was significantly reduced compared to the diabetic control groups, which were alloxan-only treated groups. In type-2 diabetes, there is a marked imbalance in lipid metabolism 19. Diabetic dyslipidemia is characterized by low HDL-C and elevated level of TG and LDL-C particles 20, 21. A significant increase in plasma cholesterol and triglycerides and a significant decrease in HDL-C were observed in diabetic rats in the present study. The plant extract-treated group shows a reduction in cholesterol and triglyceride levels. Our results resemble the work done by Husain et al. 22. Picrorhiza kurroa forms an important ingredient in a few commercial herbal products such as Ojamin (manufactured by Tates Remedies) and Madhumehari granules (formulated by Baidyanath) used for controlling diabetes.

CONCLUSION: Current study revealed a fresh method and scientific mechanism for the use of plant extract of P. kurroa as preventive and alternative medicine in the treatment of diabetes mellitus because of its hypoglycemic, antioxidant, hypolepidemic and insulin secretagogue effects. Further analyses are required in order to arrive at the optimal formulations.