ABSTRACT: Objective of the present work was to evaluating the antidiabetic property of Kandelia candel and Rhizophora apiculata extracts by using in vitro assays. The serial exhaustive extraction was carried out with a series of solvents:  chloroform, ethyl acetate, methanol, ethanol and water with increasing polarity using Soxhlet apparatus. The concentrated and dried extracts were evaluated for antidiabetic activity by employing standard in vitro techniques (Alpha-amylase and glucose uptake assay using yeast model). In vitro antidiabetic studies show that in case of Kandelia candel methanol extract showed higher antidiabetic activity where as incase of Rhizophora apiculata aqueous extract exhibited significant activity when compared to other solvent extracts.  Results confirm that aqueous extract of Rhizophora apiculata exhibited highest antidiabetic activity among all extracts. This study provides scientific evidence that the leaves of Kandelia candel and Rhizophora apiculata have anti-diabetic efficacy. However further comprehensive chemical and pharmacological investigation should be carried out to isolate the active compounds and appropriate elucidation of its mechanism of action and it helps in the development of new pharmaceuticals to treat Diabetes mellitus.

INTRODUCTION: Diabetes mellitus (DM) is a non-communicable disease often genetic in nature but can be developed due to life style and habits 1, 2. DM is a set of metabolic disorder with a common feature of high blood glucose level. It is characterized by increased blood glucose, triglyceride and hypo insulinemia that may lead to decrease in both insulin action and secretion 3, 4. Diabetes mellitus ranks highly with the top ten disorders which cause mortality throughout the world and is affecting approximately 30% of the worldwide population 5-7.

Uncontrolled Diabetes mellitus is often associated with many complications which include development of micro and macro vascular complications such as neuropathy, nephropathy, retinopathy and cardiovascular diseases 8, 9. Normally blood glucose levels are controlled by insulin produced by pancreas 10. Treatment of diabetes mainly focuses on reducing rise in blood sugar and subsequent complications. Inhibitors of α-amylase are currently used as oral hypoglycemic agents for treatment and management Diabetes.

Plants have been reported to reduce the absorption of glucose by retarding the digestive enzymes i.e. α-amylase and α-glucosidase from pancreas and gut which in turn helps preventing the high rise of glucose in blood 13-16. Several works demonstrated that many medicinal plants can be used to treat and management of diabetes and already many medicinal plants have been reported for potent antidiabetic activity 17-23.

In the present study Kandelia candel and Rhizophora apiculata plants were selected for screening antidiabetic property. Kandelia candel is the mangrove tree belonging to Rhizophoraceae family which is distributed along the western region of India. K.candel whole plant is reported to have antidiabetic activity 24, 25. In fact Rhizophoraceae species are known to have pharmacological activities. Methanolic extract of K.candel is used as antihyperglycemic agent in India 26 and bark, flowers and leaves were reported to have antiviral and antimicrobial properties 27, 28. Rhizophora apiculata is the tree species of mangrove tree belonging to rhizophoraceae family.

In Malaysia, the leaves of R. apiculata are assayed as antibreast cancer 29. Studies on HPLC investigation of R. apiculata have shown the presence of catechin monomer, an antioxidant flavonoid 30. This plant is reported to possess anti-inflammatory and anti tumor properties and is also used to regulate the antioxidant enzymes in biological system 31. Presence of tannins is reported in the bark of R. apiculata, which is known to possess antibacterial and antiviral properties 32-34. Bark of R. apiculata is used as a traditional medicine in the treatment of diarrhoea and wounds 35, 36. In Malaysia, pyroligneous acid from R. apiculata species have been used as sterilizing agent, deodorizer, fertilizer, antimicrobial agent and growth promoting agent 37.

Alkaline extract from leaf of R. apiculata reported to inhibit the HIV replication and HIV induced cytopathic effects. Some other studies have confirmed the antiviral property of R. apiculata extracts, which may be due to presence of antipolysaccharide in the extracts that acts as an antiviral agent 38. With this background, the present study was undertaken to evaluate antidiabetic properties of Kandelia candel and Rhizophora apiculata plants collected from Mangrove region of Karnataka, India by using in-vitro assays.

Plant collection: Leaves of Kandelia candel and Rhizophora apiculata were collected from Mangrove region, Sadashivghad, Karwar, Uttar Kannada District, Karnataka, India during the period of May, 2015. The leaves were identified and authenticated by Dr. Kotresha K, Dept of Botany, Karnatak Science College, Dharwad; Karnataka by referring to the voucher specimen deposited in the Dept of Botany, Karnatak Science College, Dharwad, Karnataka (Voucher specimen No 003 and 004). Fresh plant leaves material was collected and washed under running tap water, shade dried and then homogenized to coarsely powder. The powder was stored in airtight containers at -20°C for further use for crude solvent extraction.

Crude Extraction: Coarsely powdered dried leaves of Kandelia candel and Rhizophora apiculata [100g each] were subjected to successive solvent extraction using soxhlet apparatus separately. The extraction of each plant leaves material was done with different solvents in their increasing order of polarity which includes chloroform, ethyl acetate, methanol, ethanol and distilled water. Each time the plant material was dried and later extracted with next high polar solvents (following the strategy of extraction in series of increasing the solvent polarity). All extracts were concentrated in Buchi rotary evaporator, followed by removal of traces of solvent by using desiccator.

Evaluation of Antidiabetic activity by using in vitro assays:

Alpha -amylase inhibitory assay: The Alpha-amylase inhibitory assay for different solvent extracts of Kandelia candel and Rhizophora apiculata were evaluated according to a previously described method by Malik and Singh et al., (1980) with slight modification 39. In brief, 0.5 ml of extract was mixed with 0.5 ml of α-amylase solution (0.5 mg/ml) with 0.02 M sodium phosphate buffer (pH 6.9 with 0.006 M NaCl).

The mixture was incubated at room temperature for 10 min and 0.5 ml of starch solution (1%) in 0.02 M sodium phosphate buffer (pH 6.9 with 0.006 M NaCl) was added. The resulting mixture was incubated at room temperature for 10 min, and the reaction was terminated using 1mL of dinitrosalicylic acid color reagent. At this time, the test tubes were placed in a water bath (100 0C and 5 min) and cooled until room temperature was reached. The mixture was then diluted with 10 ml of deionized water, and absorbance was determined at 540 nm. The absorbance of blank (buffer instead of extract and amylase solution) and control (buffer instead of extract) samples were also determined. Acarbose was used as standard drug. The inhibition of α-amylase was calculated using the following equation:

Glucose uptake in Yeast cells: Glucose uptake assay by using yeast cells was performed according to the method of Cirillo et al., (1963) 40. The commercial baker’s yeast in distilled water was subjected to repeated centrifugation (3,000×g, 5 min) until clear supernatant fluids were obtained and 10% (v/v) of the suspension was prepared in distilled water. Various concentrations of solvents extract of Kandelia candel and Rhizophora apiculata (50 to 250 μg/mL) were added to 1mL of glucose solution (5 mM) and incubated together for 10 min at 37 0C. Reaction was started by adding 100 μL of yeast suspension followed by vortexing and further incubation at 37 0C for 60 min. After 60 min, the tubes were centrifuged (2,500 × g, 5 min) and amount of glucose was estimated in the supernatant. Metronidazole was used as standard drug. The percentage increase in glucose uptake by yeast cells was calculated using the following formula:

Statistical analysis: All experiments were performed in triplicates (n=3) and the data are presented as the mean ± standard error. Differences between the means of the individual groups were analyzed using the analysis of variance procedure of SPSS software 20 Version (IBM). The significance of differences was defined at the P < 0.05 and P < 0.01 level.

RESULTS AND DISCUSSION: Diabetes mellitus is one of the three known major killers that cause deterioration in human health after cancer and cardio-cerebral vascular diseases and it is rising over the years 41. The increasing prevalence of diabetes mellitus puts a large burden on the public health sector presenting an emerging health problem in the world 42. One of the therapeutic strategies to control hyperglycemia in diabetics is to avoid the hydrolysis of carbohydrates by the inhibition of α-amylase enzyme in order to slow down the intestinal absorption of glucose 43. Alpha-amylase is the type of enzyme involved in the metabolism of carbohydrates i.e. hydrolysis of starch and disaccharides to glucose. In humans α-amylase expressed as two isoforms, secreted from Salivary glands and Pancreas respectively. These enzymes play an important role in digestion of polysaccharides like starch which is the main source of glucose in the human diet 44-46. Human Salivary α-amylase (HSA) initiates the hydrolysis of α-(1, 4) glycosidic bonds in the dietary starch in to smaller oligosaccharides 47. Further digestion of carbohydrates takes place in the gut under control of human pancreatic α-amylase (HPA) 48.

Hence, hydrolysis of polymeric starch by HAS and HPA produces maltose, maltotriose and other oligomers, which are then degraded into glucose by α-glucosidase 49. Inhibition of α-amylase results in delayed carbohydrate digestion and glucose absorption with attenuation of post prandial hyperglycemia 50. The inhibitors of these enzymes are considered as the potential targets in the management of diabetes mellitus. Some synthetic antidiabetic drugs are available such as Acarbose, Miglitol and Voglibose but they are associated with gastrointestinal side effects such as adnominal pain, meteorism and diarrhea 51, 52.

These side effects arise as a consequence of maltose fermentation which accumulates due to α-amylase inhibition. Therefore a non-carbohydrate based α-amylase inhibitor is expected to be better agent to restrain post prandial hyperglycemia since it would not lead to abdominal accumulation of maltose 53. Many herbal products including several metals and minerals have been described for the case of diabetes mellitus. Plant products are frequently considered to be less toxic and significantly free from side effects than synthetic ones 54. Inhibition of carbohydrate hydrolyzing enzymes by medicinal plants might be attributed to several possible factors such as encapsulation of starch by the fibers present in sample thus reduce the availability of starch to the enzymes or direct absorption of the enzyme on fibers that decrease enzyme activity 55. Recently inhibition of α-amylase enzyme method became very good tool to estimate the antidiabetic potential of plant extracts 56.

In case of Rhizophora apiculata aqueous extract exhibited significant activity over all remaining tested extracts with percentage of inhibition 61.3667±0.73106 at 250µg concentration. Both plant extracts exhibited lesser activity on comparison with Metronidazole standard drug; results are shown in Table 3 and Table 4. The results indicate that methanol extract of Kandelia candel and aqueous extract of Rhizophora apiculata shown appreciable antidiabetic activity in performed in-vitro assays where as other tested extracts showed the least antidiabetic activity.

Plants are provided with secondary metabolites such as alkaloids, flavonoids, tannins, phenols and saponins which are also known as bioactive compounds and these bioactive compounds possess different biological activities which include antibacterial, antioxidant, anti-inflammatory, anticancer and antidiabetic and especially flavonoids already reported to treat type 2 diabetes 57-60. In the recent years medicinal plants and their products have been investigated for potential benefits in the management of type 2 diabetes 61, 62. 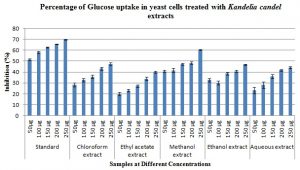 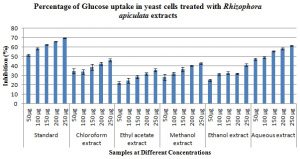 CONCLUSION: In the present study in both in-vitro methods Kandelia candel and Rhizophora apiculata plant extracts showed antidiabetic activities but among tested extracts methanol extract of Kandelia candel and aqueous extract of Rhizophora apiculata exhibited higher antidiabetic activity over all extracts with good percentage of inhibition. Based on the present study results it can be used for the development of new pharmaceutical drugs for treatment and curing of diabetes and also this study shows that these extracts offer a safe method or supplement treatment strategy to control diabetes through its alpha amylase inhibition. However further comprehensive chemical and pharmacological investigation should be carried out to isolate the active compounds and appropriate elucidation of its mechanism of action and it helps in the development of new pharmaceuticals to treat diabetes mellitus.

ACKNOWLEDGEMENT: The authors would like to thank Department of Biotechnology and Microbiology, Karnatak University, Dharwad, Karnataka, India for providing necessary facilities and laboratory for doing this research work.

CONFLICT OF INTEREST: We wish to confirm that there are no known conflicts of interest associated with this publication