ABSTRACT: Coccinia indica is a climbing, herbaceous, branched tropical vine native to tropical Asia, including India. Being a part of Indian traditional medicine for ages, it has been widely used in reducing blood sugar among various other uses. The primary objective of this study was to investigate the reported anti-diabetic potential of methanolic polyherbal extract of Coccinia indica leaves in streptozotocin induced diabetic rats. Hyperglycemia was induced in overnight fasted healthy adult Wister albino rats by a single intraperitoneal injection of Streptozotocin made in citrate buffer. The diabetic rats in groups received treatment with two different concentrations of the extract, the standard drug and saline. The effectiveness of extract in the maintenance of blood glucose level in both normal and diabetic rats is indicated by significant reduction of the elevated blood sugar level after 10 days of treatment (up to 41.87%) which is comparable to that of standard drug glibenclamide (43.50%) under similar conditions. The results from the experimental studies reflect the efficiency of extract to control blood glucose levels, thereby ascertaining the antihyperglycaemic activity of methanol extract of Coccinia indica and its potential for safe use in the antidiabetic therapy.

INTRODUCTION:Diabetes mellitus is one of the common metabolic disorders and 1.3% of the population suffers from this disease throughout the world. India leads the world with largest number of diabetic subjects earning the dubious distinction of being termed the “Diabetes capital of the world”. According to the Diabetes Atlas 2006 published by the International Diabetes Federation, the number of people with diabetes in India (currently around 40.9 million) is expected to rise to 69.9 million by 2025 requiring immediate attention of the health care professionals 1.

Diabetes Mellitus is characterized by hyperglycemia; altered metabolism of lipids, carbohydrates and proteins; and an increased risk of complications from vascular diseases. Diabetes results from lack of the hormone insulin, which is essential for the transfer of glucose from the blood to the tissues.

Insulin is a naturally occurring hormone secreted by the β cells of the islets of Langerhans in the pancreas in response to increased levels of glucose in the blood. Insulin lowers blood glucose levels by promoting transport and entry of glucose into the muscle cells and other tissues.

Insulin deficiency may result from inadequate insulin production or resistance to its action. Without sufficient insulin, the amount of glucose in the blood becomes abnormally high (hyperglycemia).

This hyperglycaemia increases the amount of urine. At the same time the effective lack of glucose as an energy substrate at the cellular level means that the body has to use its stores of fat and if necessary, muscle tissue as an alternative energy source 2, 3.

Stretozotocin (STZ) is a naturally occurring chemical obtained from soil microbe Streptomyces achromogenes, which is particularly toxic to the insulin-producing beta cells of the pancreas in mammals. It is used medically for treating certain cancers of the Islets of Langerhans and used in medical research to produce an animal model for Type 1 diabetes in large dose as well as Type 2 diabetes with multiple low doses 2.

Glimepiride is an oral hypoglycemic agent under the class of second generation sulfonylurea. It acts as an insulin secretagogue. It lowers blood sugar by stimulating the release of insulin by pancreatic beta cells and by inducing increased activity of intracellular insulin receptors.

The primary objective of this study was the evaluation of the reported anti-diabetic potential of methanolic extract of Coccinia indica leaves in streptozotocin induced diabetic rats.

For many centuries, Coccinia indica, has been a part of Indian traditional medicine and has been used for reducing blood sugar 4-6, to treat leprosy, fever, asthma, bronchitis and jaundice, stomatitis, jaundice, blood related disorders, cough and cold, urinary tract related problems, gonorrhea 3. Research suggests that the plant possess antioxidant 5 and hypolidemic properties 5. Reports suggest the anti-diabetic activity of the plant can be attributed to presence of some compounds that inhibit the enzyme glucose-6-phosphatase, which is one of the key liver enzymes involved in regulating sugar metabolism 7-9. Ivy gourd is also found to be rich in beta-carotene. The maceration of leaves of Coccinia indica is traditionally used by the local traditional healers of rural districts, West-Bengal as well as all other parts of India for curing diabetes 2, 3, 8, 9. 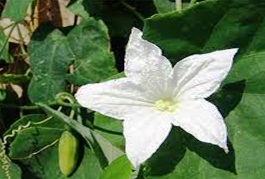 The collection of Plant Material: The plant material of Coccinia indica was collected from North Bengal districts of Malda and Cooch Behar in the months of August-September, 2011. Here we used only the leaves for investigation purpose.

Preparation of extract: About 1 kg of Fresh leaves of Coccinia indica leaves (Family: Cucurbitaceae) were dried in an incubator for two days at 40ºC, crushed in an electrical grinder to fine powder. The powder was then extracted with 60% methanol in a Soxhlet apparatus dried under reduced pressure with the help of rotary vacuum evaporator and finally lyophilized.

Experimental animals: Healthy adult Wister strain albino rats of both sex between 2-3 months of age and weighing 180-240 gram were used for the study. The animals were procured and housed in the animal house maintained under standard hygienic conditions of temperature (20±2°C), humidity (60±10%), Light (12h light/ 12 h dark cycle) with free access to food and water, which complied with the norms of the Institutional Animal Ethical Committee (IAEC) as per CPCSEA guidelines under optimum conditions and facilities for experimentation.

The animals were acclimatized to these laboratory conditions for a period of two weeks prior to the experiments.

Normoglyceamic study: After subjecting to an overnight fast, 18 rats divided into three groups of six animals each subjected for Normoglyceamic study. Group I was kept as control and the rats received only saline. In Group II and III, rats were given methanol extract of C. indica (MECI)at a concentration of 150 and 300 mg/kg, by oral route. Blood samples were withdrawn from tail vein of each animal for fasting blood glucose estimation after 1, 4, 8, 12 hrs of treatment. Blood glucose level was estimated by using a Glucometer (Gluco-Check sensor from Roche Diagnostic Corporation).

Induction of diabetes: Hyperglycemia was induced in overnight fasted rats by a single intraperitoneal injection of 65 mg/ kg Streptozotocin (Sisco Research Laboratories Pvt. Ltd., India) made in citrate buffer (pH 4.5) in a volume of 1ml/kg body weight. Hyperglycemia was confirmed by the elevated glucose level in plasma, determined at 48 hours after injection. The rats found to be hyperglyceamic were then screened for the Anti-hyperglyceamic study.

Antihyperglycaemic Study: Hyperglycaemic animals were then divided into four groups of six rats in each group. Group I was treated with saline, which was previously adjusted to pH 4.5 with 0.05 M citric acid. Group II and III were administered methanol extract of C. indica (MECI) at doses of 150 and 300 mg/kg body weight respectively by oral route. Group IV animals were treated with saline solution containing the standard drug Glibenclamide (Glucosafe 2.5 mg from Sun Pharma) at a dose of 0.25 mg/kg body weight. All doses were started 48 hours after Streptozotocin injection. Fasting blood glucose levels of rats were estimated by the Glucometer at an interval of 1, 4, 8 and 10 days from the respective start of treatments.

Normoglycaemic Study: The effect of oral dosage of different concentrations of MECI on blood glucose levels in overnight fasted rats is depicted in Table 1.The glucose levels were found to be increasing in the rats of the control group over a period of 12 hrs from treatment by 5.33% when compared to results after 1 hr of the treatment.

In case of the MECI treated rats of Group II and III over the same period of time and upon similar comparison, the glucose levels were found to have decreased by 27.58 and 26.24% respectively.

Antihyperglycaemic Study: The effect of oral dosage of different concentrations of MECI and standard antidiabetic drug on blood glucose levels in streptozotocin induced diabetic rats is depicted in Table 2.

Further, from the results it can be seen that treatment with higher concentration of MECI yields a greater reduction in the plasma glucose levels.

Thus, the results of the antihyperglycaemic study indicate that in comparison with the control group, the Plasma glucose concentration in STZ induced rats was found to be significantly decreasing in a time and concentration dependent manner and is further comparable to that of the standard drugs prescribed for Diabetes.

Values are expressed as mean + SEM (n = 6).The results were analyzed by ANOVA followed by Dunnett’s test. *p < 0.001 when compared to control group.

Values are expressed as mean + SEM (n = 6).The results were analyzed by ANOVA followed by Dunnett’s test. *p < .001 vs. control. Data in parenthesis indicate % of decrease when compared to control.

ACKNOWLEDGEMENTS: The authors wish to thank the laboratory technicians and attendants of GCTS Asansol and Department of Pharmaceutical Technology, Jadavpur University for their support to carry out this work.