ABSTRACT: Swertia chirayita (SC) has been traditionally used for the treatment of several metabolic disorders related to health problems. We have investigated the antidyslipidemic and antioxidant potential of Swertia chirayita (SC) plant, a potent antidiabetic, and its isolated markers. The LC-ESI-MS standardized hot water extracts of different batches from the whole plant of Swertia chirayita, were tested in-vivo for their antidyslipidemic activity in Triton (WR-1339) and high-fat diet (HFD) induced dyslipidemic Charles Foster rats and in vitro for their antioxidant activity. Further solvent fractionation and isolation resulted in the identification of antidyslipidemic Mangiferin (MG) and Amarogentin (AM). Treatment of hyperlipidemic rats with MG and AM at 100 and 200mg/kg doses caused reduction in plasma levels of Low density lipoprotein (LDL) 24, 26% and very low - density lipoprotein (VLDL) 19, 25% as well as increase in levels of High density lipoprotein (HDL) 18, 22% respectively. In rats with HFD, MG and AM significantly reduced levels of VLDL lipids (26% and 27%) as well as Low-density lipoprotein-Total cholesterol (LDL-TC) 27% and 30% in hyperlipidemic rats at 100 and 200 mg/kg doses. This is the first report of AM demonstrated as an antidyslipidemic agent. MG and AM also showed inhibition of superoxide anion, hydroxyl free radicals and microsomal lipid peroxidation by 24 & 28%, 25 & 31% and 27 & 25%, respectively. Also, both MG and AM also demonstrated more effective inhibition at 5 μM and 10 μM of HMGR (HMG-CoA reductase) in comparison to Pravastatin, which was further confirmed by docking studies.

INTRODUCTION: Cardiovascular disease (CVD) remains the leading cause of death in the developed countries and is major cause of mortality and disease in the Indian subcontinent.

The World Health Organization (WHO) estimates that CVD is today the largest single contributor to global mortality and will continue to dominate mortality trends in the future 1. Increase in low-density lipoprotein (LDL), triglyceride (TG) and total cholesterol (TC) levels with decrease of high- density lipoprotein (HDL) levels have been established as one of the risk factors for CVD2.

Clinical and epidemiological studies have consistently shown that low plasma levels of high-density lipoproteins cholesterol (HDL-C) are strongly and independently associated with an elevated risk of CVD3.

Reactive oxygen species (ROS) and oxidative stress are also important contributors to CVD4. Oxidative stress followed by elevated blood lipid levels, especially of LDL and TG, is recognized as a primary cause in the initiation and progression of CVD 5. Enhanced lipid peroxidation acts as a potential contributor to increased cardiovascular risk in low HDL phenotype 6. Normal functional HDL has high antioxidant potential 7. Therefore, agents that increase HDL cholesterol concentration in the blood and thereby the ratio of HDL-C to TC (HDL-C/TC) and reduce oxidative stress would have promising therapeutic utility as anti-dyslipidemic and antioxidant agents.

In continuation of our research programs on bio-evaluation of medicinal plants in India, we have investigated the antidyslipidemic and antioxidant potential of Swertia chirayita (Roxb. ex Flem., Family: Gentianaceae). It is an indigenous medicinal plant of temperate Himalaya. The decoction of the plant has been used traditionally for the treatment of liver disease, febrifuge, anthelmintic, laxative and malarial fever 8, 9. Studies on the biological activities of different extracts of SC revealed that the plant possesses antioxidant 10, antihyperglycemic 11, 12 anti-carcinogenic 13, analgesic 14, antimicrobial 15 properties.

The liquid chromatography-electron spray ionization-mass spectroscopy (LC-ESI-MS) standardized hot water extract its, solvent fractions and two glycosides, of SC, a potent antidiabetic16, were studied in Triton (WR-1339) and HFD induced hyperlipidemic rats model. Their effect on cholesterol biosynthesis and antioxidant activity was also studied in the in-vitro system, which was confirmed by molecular docking.

Plant Material and Preparation of Extract: Whole plant materials of SC were collected during Sep-Oct 2002 (Botany Reg. no. 8359, Batch no. 46 and 47 and Sep-Oct 2007 Botany Reg. No. 8563, Batch No. 48) from Simana Darjeeling (West Bengal) India and authenticated by Botany Division of CDRI, Lucknow, where the specimens are preserved. The process comprises the steps of hot extraction of powdered whole plant material (1.0 Kg) of SC for 2 h in deionized boiling water (8L x 4). The combined extract was filtered with fine cloth, and the filtrate was concentrated under reduced pressure at 45 ºC. These hot water extracts (i.e., 46/A1, 47/A1, and 48/A1) were used for the biological evaluation and separation of fractions as well as isolation of compounds.

Isolation of Fractions and Compounds: The extract was fractionated with hot methanol (500 mL × 4) and combined fractions were concentrated to complete removal of solvent (F2). The residue (F3) was then fractionated with 10% methanol in water (200 mL × 4) which on concentration to dryness gave (F4) and the remaining residue (F5) which was dried in an oven at 50 ºC for 4-5 h and then used for the experiment. F2 was dissolved in methanol and concentrated up to half of its volume and kept in a conical flask at 10ºC for 24 h, a yellowish amorphous compound settled at the bottom of the flask which was filtered and  passed through Sephadex LH-20 column in Water (H2O), H2O-methanol (8:2, 6:4, 5:5, 4:6, 2:8) and methanol. Eluted fractions were monitored on reverse phase-18 (RP-18) TLC plate in H2O: methanol and H2O: acetonitrile (6:4 and 5:5) and TLC plates were sprayed with 5% ceric sulfate and spots were developed by heating at 110 ºC. MG Fig. 1 was isolated after repeated crystallization from methanol in a 0.4% yield. The methanol fraction was subjected to repeat column chromatography over silica gel in 5-10% methanol-chloroform mixture gave AM Fig. 1 in 0.2% yield. 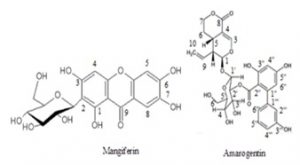 FIG. 1: STRUCTURE OF MANGIFERIN AND AMAROGENTIN

Structure of these compounds was carried out by spectroscopic techniques and confirmed by comparison of its experimental data with that of reported in literature 17.

Sample Analysis LC-ESI-MS and MS/MS Analysis: The LC-ESI-MS and MS/MS analysis of hot water extract (46-A1) of the plant were performed on Waters TQD triple quadruple mass spectrometer (USA) equipped with Waters H-Class Acquity UPLC system and electron spray ionization source. Mobile phase (A) acetonitrile and (B) 5 mM ammonium acetate buffer were used and linear gradient elution performed at the flow rate of 0.350 mL min-1 (as 90-80% B in 0-4 min; 80-50% B in 4-6 min; 50-20% B in 6-8 min.). Waters BEH C-18 100 × 2.1 mm, the 1.7µm column was used and ESI source potentials were capillary voltage 3.5 kV; cone potential at 30 V for LC-ESI-MS experiments. Nitrogen was used as the nebulizing and drying gas at flow rates of 50 and 650 L h-1 respectively. Online collision-induced dissociation (CID) experiments were performed at 25 eV and argon used as the collision gas. Data acquisition and processing were carried out using Mass Lynx V4.1 SCN 714 software. The spectra were accumulated from the top of Extracted ion chromatogram (EIC) peak Fig. 2. 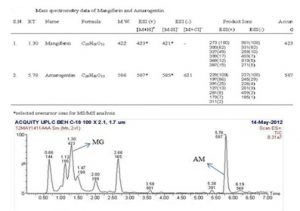 Experimental Animals: Male adult rats of Charles Foster (CF) strain (100-150g) bred in the animal house of the institute were used after approval of the Animal Ethics Committee (IAEC/2010/149). The animals were kept in controlled conditions of temperature (25-26 °C), relative humidity (60-80%) and 12/12h light/ dark cycle (light from 8:00 am to 8:00 pm) and provided with standard pellet diet (Lipton India Ltd) and water ad libitum.

Triton and HFD Induced Hyperlipidemia: The rats were divided into control, triton, and triton plus drug-treated groups of six rats in each. In the acute experiment, triton was administered (400mg/kg body-wt.) by intraperitoneal injection for 18 hours. These test material and gemfibrozil (Cipla Ltd, Bombay, India) were macerated with 0.2% aqueous gum acacia suspension and fed orally (200mg/kg body-wt.) simultaneously with triton. In the chronic experiment, hyperlipidemia was produced by feeding with HFD once a day for 30 days. Drugs were administered (100 mg/kg body-wt.) orally simultaneously with HFD in drug-treated groups. Control animals received the same amount of natural saline or groundnut oil. At the end of experiments, rats fasted overnight, and blood was withdrawn. The animals were killed, and the liver was excised immediately. The plasma was analyzed for TC, TG, PL (phospholipids) and lecithin cholesterol acyltransferase activity (LCAT) and post heparin lipolytic activity (PHLA) activity.

Biochemical Analysis of Plasma/Serum: LCAT and PHLA activity was assayed by reported procedure 18, 19. Serum was fractionated into VLDL, LDL, and HDL by polyanionic precipitation methods 20. Serums, as well as lipoproteins, were analyzed for their TC, PL, and TG by standard procedures reported earlier21.

Biochemical Analysis of Liver: Liver was homogenized (10% w/v) in cold 100mM phosphate buffer pH 7.2 and used for the assay of total lipolytic activity 19. The lipid extract of each homogenate was used for estimation of TC, PL, TG, and TP (total protein).

Faecal Bile Acids: The rat faeces were collected from all groups throughout 30 days and processed for estimation of cholic and deoxycholic acid22.

Cholesterol Biosynthesis: The effect of  MG and AM on cholesterol biosynthesis was estimated as their effect on HMGR, in an in-vitro experiment using protocol and reagents provided with a standard test kit from Sigma Chemical Company.

Antioxidant Activity: The effect of test substances on the generation of superoxide anions and hydroxyl free radical were measured in the in-vitro enzymatic systems as described earlier 23.

Molecular Modeling: Three-dimensional coordinates of MG and AM were extracted from PubChem compound database (Pub chem compound Id. 5464041 and 115149 respectively) for docking purposes against Human HMGR (pdb id: 1Hw9) using Flex X implemented in Sybyl 7.1 24. Flex X applies incremental building method for flexible docking of small molecules. Gasteiger-Huckel charges were assigned to all the ligands before docking calculation. All the values were kept in the default for docking studies. Docking parameters were validated through the redocking of crystallized Simvastatin (6c).

Effect of SC Extract on Triton-Induced Hyperlipidemia:  The effect of triton was found to be reversed by the hot water extracts and fractions of SC Fig. 3.

Effect of SC Extract on High Fat Diet-Induced Dyslipidemia: Further studies on MG and AM were carried out using HFD - induced hyperlipidemic rats. The HFD induced Hyperlipidemic rats model is more suitable for study because the rats consume the diet and water ad libitum, similar to human eating patterns, rather than being force-fed. The results of the feeding of HFD in rats suggested an increase in their serum levels of TC, PL, and TG by 131%, 91% and 89% respectively Table A1.

TABLE A1: EFFECT OF MG AND AM ON LIPID COMPOSITION IN SERUM LIPOPROTEINS IN HFD INDUCED HYPERLIPIDEMIC RATS