ABSTRACT:  Molybdenum is a trace element distributed widely in nature which plays an important role in plant and animal nutrition and in our industrial society. Molybdenum is essentially present in the enzymes nitrogenase,    Xanthine-oxidase, sulphite oxidas, nitrate reductase, formate dehydrogenase and aldehyde oxidase. These enzymes are responsible for a number of catalytic reactions of redox nature. Molybdenum complexes were synthesized and characterized for their purity by various physico-chemical methods like IR, Electronic, 1H1 NMR spectral studies Antimicrobial activity of compounds against certain microbial species has been carried out by serial dilution method using BOD incubator to evaluate the MIC (Minimum Inhibitory Concentration) value on the basis of MIC value it is interpretated that Molybdenum complexes are most active as compared to ligand fragments. The DNA binding ability of the complexes was examined by using biophysical spectroscopic studies. These studies indicate that the compounds can intercalate and stablize DNA. This work has great importance in the field of bioinorganic relevance.

INTRODUCTION: The Dithiocarbamate Ligand is one of those polyatomic ligand which can stablize higher oxidation states of Molybdenum metal1 in their complexes. Molybdenum forms complexes with dithiocarbamate ligands. These complexes have biological properties which include antimicrobial, anti malarial and anti cancer activities. Moreover drugs that are capable of targeting DNA are of substantial interest because their potential use in cancer chemotherapy. Molybdenum complexes can bind to DNA through a series of interactions 2-4 like coordination by the DNA bases, Intercalation and non-covalent interaction including hydrogen bonding between the coordinated ligands and phosphate oxygen atoms of the sugar phosphate group.

Binding may induce cleavage of Nucleic acids which may be considered as an enzymatic reaction comprising various biological processes as well as biotechnological manipulation of genetic material Recently, there has been more interest in DNA probing based on the development of a DNA chip used for genetic diagnosis. In design and synthesis of New metalloinercalators for their applications, it is important to understand the factors that govern the DNA binding of the intercalates.

Furthermore, these complexes also have many convenient features to be used for DNA binding studies, including the easy coordination of the ligands to the metal ions in a controlled manner, strong electronic absorption in the visible region due to metal to ligand charge transfer (MLCT) or   p-p* Transitions of the ligands, and strong luminescence. These features provide a convenient handle for monitoring the process and mechanism of the DNA binding event by spectroscopic methods. The synthesized Molybdenum complexes were studied for antimicrobial activity, and as well as the effect of metal ion on the DNA binding mode.

This work has great importance in the field of Bioinorganic relevance. These metal complexes have significant biological properties 5-6 which include Biocidal, antihelmintic, anti-inflammatory and anticancer activities. Moreover drugs that are capable of targeting DNA are of substantial interest because of their potential use in cancer chemotherapy.

All the chemicals and reagents were of reagent grade. Solvents and chemicals were purified and dried by standard methods. Highly polymerized calf thymus DNA (CT DNA) purchased from sigma co. The ligands and tetrathiometallate of Molybdenum were prepared by the reported procedures. FTIR were recorded on Thermo Nicolet Avatar 370. Electronic spectra on varian cary 2390 UV-VIS-NIR Spectrophotometer, NMR Spectra on Bruker Avance III, 400 MHZ Spectrometer All the experiments involving the interaction of complexes with CT-DNA were conducted in tris buffer (10 mm Tris-HCl 50 mm Nacl buffer pH 7.4) Viscosity titration experiments were carried on an ostwald's viscometer at room temp by varying the complex conc. and a constant (CT-DNA) Conc. 50µm).

0.001 mol ammonium tetrathiomolybdate solution in 15.0 ml water was added to solution of 0.001 mol. Dithiocarbamate in minimum quantity of double distilled water. The determination was based on the method proposed by Thorn GD et al 7 (1962). The mixture solution was well stirred with the help of magnetic stirrer and it was reduced to one third of its original volume on boiling and filtered hot. Now solution was kept into refrigerator for overnight. A coloured crystalline product was obtained which was washed with water, ethanol followed by ether and finally dried in vacuo.

All the complexes were tested  for their antimicrobial activity by using serial dilution method against, Bacterial species Viz Escherichia coli (g-ve) and staphylococcus aureus (g+ve) (incubation period for Bacteria 24hr at 370c). Fungal species Viz Aspergillus niger and candida albicans. (incubation period for Fungi 96 hr at 280c) The experiment was performed according to the method of Goldman 8 E (2008) and  Dietrich etal9 (2007).     Many techniques have been used for the investigation of the interaction of metal complexes with DNA these include UV-Visible, Fluorescence studies CD spectral studies, Viscosity measurements. Metal DNA interaction studies was done according to the method of Hadjliadis and sletten10 (2009).

All the complexes are non hygroscopic and stable at room temp. They are insoluble in water and common organic solvents but soluble in DMF and DMSO. Compounds were routinely checked for their purity on silica GEL-G TLC plates and spots were visualised by Iodine vapours. Molar conductance values of the complexes were found to be Less Than 30Ώ cm2 mol-1 suggesting non electrolytic nature of the complexes.

All the complexes were tested for their antimicrobial activity 15-18 by using serial dilution method against bacteria and Fungi. The observed MIC values of the compounds have been presented in Table 1. The compounds No. 1 & 2 which are used as starting material for the synthesis of Molybdenum are biologically in active against both the bacteria and fungi. This is probably either due to lipid insoluble nature (Water soluble character) or their instability in the solution.

The compounds (Nos. 3, 4, 5) which are Quite antibacterial and antifungal in nature as indicated by their MIC values but their Biocidal activity is retarded in their synthesized complexes due to their non availability in free state to the cellular fluids of microbial cells and thus their diffusion through the cell membrane is considerably inhibited causing only their small concentrations in the values.

The compounds (Nos.  3a, 4a, 5a) are the binuclear sulphur rich compounds of Molybdenum since these are fairly stable and water insoluble they can easily pass through the cytoplasmic membrance and become lipid soluble inside the cell causing bacteriostatic and fungitoxic effects.

Thus we can say that metal complexes are more active as compared to the ligand used. The antimicrobial activity of ligand enhances several folds on complexion probably due to faster diffusion of metal complexes as a whole through the cell membrane or due to combined activity effect of metal and ligand.

The absorption of molybdenum complex in the visible wave length region arises from metal to ligand charge Transfer (MLCT) Transitions (lmax =505nm) and from an inter ligand (IL) Transition (lmax 375 and 360nm) The 375 nm inter ligand Transition (IL) is hardly perturbed in the metal complex as compared to the free ligand dithiocarbamate (lmax=378nm) The MLCT and IL bands of Molybdenum complex do not overlap with each other.

This feature makes the monitoring and interpretation of DNA binding event of the Molybdenum complex by UV-visible absorption method much easier. The profiles of isotropic absorption of the Metal ligand Complex in the presence of CT-DNA are shown in Fig(1) The addition of increasing amounts of CT-DNA resulted in the hypochromism and  bathochromic shift of the absorption maxima in the UV-visible spectra of Metal complex. 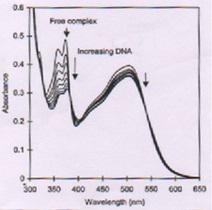 FIG 1: ABSORPTION SPECTRA OF MOLYBDENUM COMPLEX IN THE ABSENCE OR PRESENCE OF INCREASING AMOUNTS OF CT DNA

Spectrophotometric titration curves measured between 300 and 650 nm revealed that two isobestic points are present at 384 and 540 nm indicating that there is an equilibrium state between metal complex and CT-DNA Hypochromicity is observed on the addition of CT-DNA this significant hyperchromism effect suggest that there exists a strong interaction between the complex and CT-DNA19. (Figure 1)

To further clarify the interaction between complex and DNA, Viscosity measurements were carried out. The Viscosity measurements of CT-DNA are regarded as the least ambiguous and the most critical tests of a binding model in solution in the absence of crystallographic structural data. A classical intercalation model result in lengthening of the DNA helix as base pairs are separated to accommodate the binding ligand leading to an increase in DNA Viscosity. The Viscosity of CT-DNA20 is found to be increased in the presence of Molybdenum complex.

This observation suggests that the mode of DNA binding by complex involved base pair intercalation which confirms the partial intercalation of Mo(V) complex into the double helical organization of the CT-DNA.(Figure 2) 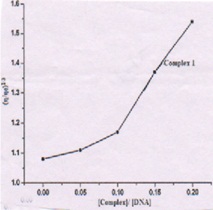 FIG.2: EFFECT OF INCREASING AMOUNTS OF Mo(V) COMPLEX ON THE RELATIVE VISCOSITY OF CT-DNA.

Fluorecence 21 Titration experiments was performed to investigate the interaction mode between the Molybdenum complex and CT-DNA.

Fluorescence spectroscopy is a sensitive technique and is very useful for identifying the interaction of fluorescent molecules with macromolecules at low concentration as well for probing the electronic environment around. The macromolecule and ligand at the time of their interaction. The complex emits luminescence in Tris-HCl buffer with maximum wavelength of about 385 nm Fig 3 shows the emission spectra of the complex in the absence and presence of varying amounts of CT-DNA. As the CT-DNA concentration increased the emission intensity decreases due to self-stacking of some free bases in the compound along the DNA surface.

Quenching can occur by different mechanisms, which are usually classified as dynamic and static quenching. All fluorescence emission peaks exhibited hyperchromicity, which indicates intermolecular fluorescence resonance energy transfer (FRET) between the excited molecules (donor) and the nucleosides of the DNA (acceptor). In addition, effective fluorescence intensity enhancement occurs due to non radiative deactivation of the excited ligand molecule. (Figure 3) 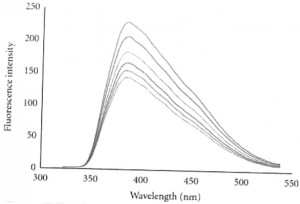 FIG. 3: FLUORESCENCE SPECTRA OF Mo(V) COMPLEX IN THE SEVERAL CONCENTRATIONS OF CT-DNA

The DNA binding potential of the synthesized Molybdenum complexes suggest that complex can intercalate and stablize DNA. Our finding may give a new application and open a new way in the design of more effective and useful Molybdenum complexes for Synthetic as well as medicinal chemists.

ACKNOWLEDGEMENT: In this work I would like to thank STIC, Cochin University, Central Drug Research Institute Lucknow and Sardar Patel; Centre for Science and Technology Vallabh Vidya Nagar for their help and suggestions.