ABSTRACT: The in vitro antimicrobial activity of acetone, methanol and water extracts of leaf, stem bark and fruit of Elaeocarpus serratus L. (Elaeocarpaceae) was examined against four bacterial species (Shigella sonnei, Salmonella typhi, Staphylococcus aureus and Klebsiella pneumoniae) and a fungal species (Candida albicans) using the agar well diffusion method. Phytochemical screening was carried out for phenols, flavonoids and tannins. Results showed that the plant extracts exhibited a dose-dependent inhibition of microorganisms. The acetone and methanol extracts of leaf and stem bark of E. serratus displayed maximum antibacterial activity against all the bacterial species studied. The plant extracts also displayed high antifungal activity against Candida albicans especially, the acetone extract was found to be more active antifungal.  Generally, the lower concentrations of the extracts were susceptible to the fungal pathogen. E. serratus extracts contained phenols, flavonoids and tannins at varying levels. The ability of the crude extracts of the test plant to inhibit the growth of bacteria and fungi is an indication of its broad spectrum antimicrobial potential which may be employed in the management of microbial infections.

INTRODUCTION: In recent years, multiple drug resistance in human pathogenic microorganisms has developed due to indiscriminate use of commercial antimicrobial drugs commonly used in the treatment of infectious diseases. This situation, coupled with the undesirable side effects of certain antibiotics and the emergence of previously uncommon infections are a serious medical problem 1, 2. Therefore the scientists of the21st century are generally reviving our traditional knowledge and are screening various parts of plants scientifically used in the folklore medicine in search of newer lead compounds having antimicrobial efficacy 3, 4.

Medicinal plants are known to produce certain bioactive molecules which react with organisms in the environment, inhibiting bacterial or fungal growth and protect the human body against pathogens 5, 6.

Plant materials and preparation of extract: The leaves, stem bark and fruits of Elaeocarpus serratus L. were collected from Upper Palani Hills of Western Ghats (Kodaikanal Forest Division), India and were authenticated at Botanical Survey of India (BSI), Southern Circle, Coimbatore, India and the herbarium of Voucher specimen number BSI/SRC/5/23/2011-12/Tech.  239 have been deposited at the Department of Botany, Vellalar College for Women, Erode (T.N), India. The plant materials were dried separately under shade and pulverized in a mechanical grinder and stored in a closed container for further use.

The air dried, powdered plant materials were extracted in the Soxhlet apparatus successively with different solvents in the increasing order of polarity [Acetone (56.5°C), Methanol (64.7°C) and Water (99.98°C)]. Each time before extracting with the next solvent, the powdered materials were dried in a hot air oven at 40°C. Finally, the materials were macerated using hot water with occasional stirring for 16 hours and the water extracts were filtered.

The different solvent extracts were concentrated, vacuum dried and weighed. The percentage yield was expressed in terms of air dried sample. The extracts were dried over anhydrous sodium sulphate, stored in sealed vials in refrigerator (5-8°C) until analysis14. All the reagents used were of analytical grade.

Antimicrobial bioassay: The antimicrobial activity of the crude extracts was determined in accordance with the agar well diffusion methoddescribed by Sinclair and Dhingra,(1995)15. Bacteria were cultured overnight at 37ºC in Mueller Hinton Broth (MHB) and fungi at 28°C for 72 hours in Potato Dextrose Broth (PDB) and used as inoculum.

A final inoculum, using 100μl of suspension containing 108 CFU/ml of bacteria and 104 spore/ml of fungi were spread on Mueller Hinton Agar (MHA) and Potato Dextrose Agar (PDA) medium, respectively. Subsequently, using a sterile borer, well of 9 mm diameter was made in the inoculated media. Addition of 50, 100, 150 and 200 μl of 20 mg/ml each extract was aseptically filled into the well. Negative control was prepared using the same solvent employed to dissolve the extracts. Gentamycin (50 μg/ml) and Amphotericin (100 units/disc) were used as positive control. The test plates were incubated at 37°C for 24 hours depending on the incubation time required for a visible growth. The diameter of zone of inhibition (mean of triplicates ± SD) as indicated by clear area which was devoid of growth of microbes was measured.

Statistical evaluation: Each assay in this experiment was repeated thrice and the values were expressed as mean of triplicate analysis of the samples (n = 3) ± Standard Deviation (SD).

Preliminary phytochemical analysis: The extracts of the plant were screened for phenols, flavonoids and tannins using the following procedure:

Phenols: The extract (50 mg) was dissolved in 5 ml of distilled water. To this, few drops of neutral 5% ferric chloride solution were added. A dark green colour indicated the presence of phenolic compounds 16.

Flavonoids: Four milliliters of extract solution was treated with 1.5 ml of 50% methanol solution. The solution was warmed and metal magnesium was added. To this solution, 5-6 drops of concentrated hydrochloric acid was added and red color was observed for flavonoids and orange color for flavones 17.

Tannins: To 0.5 ml of extract solution 1 ml of water and 1-2 drops of ferric chloride solution was added. Blue color was observed for gallic tannins and green black for catecholic    tannins 18.

RESULTS AND DISCUSSION: The percentage yield of extracts and the phytochemical constituents of the plant are shown in Fig. 1 and Table 1, respectively. The maximum per cent yield was registered in the acetone  extract  of  leaf  of  E.serratus  (27.67%  ).The  methanol  extract  of  stem  bark  of E.serratus registered an yield percentage of 16.0% . Generally, the acetone and methanol extracts of plant parts contained more constituents than the water extracts. This might be due to the fact that phenolics are often extracted in higher amounts in more polar solvents such as aqueous methanol/ethanol as compared with absolute methanol/ethanol 19. This was in agreement with the findings of Shon et al. (2004)20 who investigated  that  methanol  and  hot  water  were  more  efficient  to  extract  antioxidant compounds from Phellinus baumii. Similarly, Singh et al. (2010)21 showed that of all the solvents (pet ether, chloroform, ethanol and water) used, the ethanol extract of Elaeocarpus ganitrus had a maximum extractable value of 2.4% and chloroform had a minimum value of 0.5%. 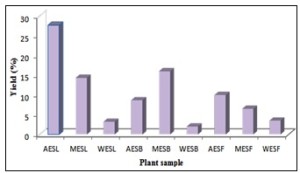 FIG. 1: THE PER CENT YIELD OF DIFFERENT SOLVENT EXTRACTS OF ELAEOCARPUS SERRATUS

The antimicrobial activity of different extracts of E. serratus is shown in Table 2. The plant extracts showed a dose-dependent inhibition of micro-organisms.

Generally, the inhibition of all the bacterial species (except Klebsiella pneumoniae) by the standard antibiotic gentamycin (50 μg/ml) was higher than the various solvent extracts of the test plant.

In the present findings, E. serratus extracts displayed high antifungal activity against Candida albicans.  The water extract of leaf and acetone extract of fruit of E. serratus produced the maximum inhibition zone of 18±1.05 and 18±0.92 mm at 200 μg/ml. On the whole, the various solvent extracts of the plant parts at higher concentrations (150 and 200 μg/ml) inhibited the fungal growth more effectively than the standard amphotericin which showed an inhibition zone of 11±0.02 mm at a concentration of 100 units per disc. Generally, the lower concentrations of the extracts were susceptible to the fungal pathogen.

Phenolics  and  polyphenols  present  in  the  plants  were  known  to  be  toxic  to  the microorganisms 22. Flavonoids have been reported to have both antibacterial and antifungal activities 23. Tannins from Dichrostachys cinerea root bark possessed antibacterial activities 24. In the present study, the phytochemical analysis of E. serratus solvent extracts revealed the presence of phenols, flavonoids and tannins at varying intensity. The phytochemical characteristics possessed by E. serratus may be attributed to its antimicrobial properties.

In support of the present study, the results of Nair and Chanda (2007) 25 revealed that the ethanol extracts were more potent than aqueous extracts of all the plants studied. Similar trend was also noted by Ekwenye and Edeha (2010) 26. According to them, the ethanol extracts of Citrus sinensis exhibited inhibitory activities that were found to be a little higher than aqueous extract on the bacterial species investigated. It can be therefore inferred that the active principles of the plant may be more soluble in ethanol than in water. Results of the present investigation agreed with the report of Arokiyaraj et al (2009) 27.

According to them, Vitex doniana and Cajanus cajan acetone, methanol, ethanol extracts generally produced a clear inhibitory effect on the bacteria. The present findings were also supported by Singh et al (2010) 21 who evaluated the petroleum ether, chloroform, ethanol and water extracts of dried fruits of Elaeocarpus ganitrus for antifungal activity on different fungal strains. The chloroform and ethanol extracts were found to be more active antifungals.

CONCLUSION: It is inferred from the current findings that the phytoconstituents might be present in high concentrations in the leaf of Elaeocarpus serratus along with some new microbicidal agents reflecting its higher bactericidal potential. However, further studies are necessary to find out the active principles responsible for these activities which can be used as natural antimicrobial agents for human consumption and cure of infectious diseases.