EVALUATION OF ANTIOXIDANT AND ANTI-ULCER ACTIVITY OF SMILAX PERFOLIATA LINN.

EVALUATION OF ANTIOXIDANT AND ANTI-ULCER ACTIVITY OF SMILAX PERFOLIATA LINN.

ABSTRACT: The leaves and fruits of Smilax perfoliata are traditionally used for treatment of various ailments such as rheumatism, lumbago, nourishing the functions of spleen, stomach, muscle and bone. The intent of the present study was to evaluate the antioxidant and anti-ulcer activity of ethanolic leaves and fruits extract of Smilax perfoliata Linn in albino rats. Gastric ulcers were induced by employing pylorus ligation method of induction. The anti-ulcer activity was analyzed by estimation of free acidity and the total acidity. The antioxidant potential was analyzed by method of DPPH free radical scavenging activity. The results obtained showed that the leaves and fruits of Smilax perfoliata possess antioxidant potential and are capable in the ministration of gastric ulcers

Other invasive tests which use gastric antral biopsies are also being widely used in the diagnosis of peptic ulcers. Peptic ulcer disease had a tremendous effect on morbidity and mortality until the last decades of the 20th century, after when; there was an impressive fall in its incidence. Globally, as of 2010, approximately 2.5 million people died of peptic ulcer disease down from 3.2 million in 1990. 2 Reactive oxygen species (ROS) have been commonly known in the genesis of gastric ulcers.

Thereby, the use of antioxidants in the formulations to produce cytoprotective effect is effective in combating these ulcers. 5 However, treatment can be done by means of various drugs to reduce the gastric acid secretion, to neutralize the gastric acid, use of cytoprotective agents, and employing antibiotics which inhibit the H.pylori. Thus, this study was aimed for the evaluation of anti ulcer and antioxidant activity of ethanolic leaves and fruits extract of Smilax perfoliata in albino rats.

The chemicals and the diagnostic kits for various biochemical analyses were obtained from Transgene biotech ltd., Bolarum, Hyderabad, India.

Female albino rats weighing between 150-200gms were selected for the study. The animals were housed well in the animal house under standard conditions approved by the CPCSEA with Registration No: 1330/ac/10/CPCSEA in properly ventilated cages with light dark cycle and fed with proper pellet diet with free access to water. The experimental protocol was approved by the institutional animal ethics committee.

Preperation of the extact:

Smilax (Smilax Perfoliata) fresh leaves and fruits were collected, dried under the sun for 7days and finally in an oven below 60˚c.The dried plant material was ground into fine course powder and extracted with ethanol in cold condition. Extract was prepared by steam boiling of plant material and Maceration in motor by adding measured quantity of water. The doses of plant extract were selected based on acute toxicity study carried out as per OPPTS (Office of Prevention, Pesticide and Toxic Substance) following limit test procedure. The food and water to the animals was withheld overnight prior to acute toxicity studies. Rats were divided into two groups of three animals each.

Test dose of 200 mg/kg body weight per oral and 500 mg/kg body weight per oral were given orally to either group of rats. Rats were observed for 72 hours for mortality. The same safety doses were selected for high and low doses respectively. Alkaloids, glycosides, carbohydrates, steroids, triterpenoids, saponins, tannins and aminoacids were revealed during phytochemical screening of the extract.

Healthy female Wister rats were divided into 5 groups with 6 animals each. All the animals had free access to diet and water throughout the study period.7

The antioxidant activity of the plant extract and the standard was assessed on the basis of the radical scavenging effect of the stable 1, 1-diphenyl-2-picrylhydrazyl (DPPH)-free radical activity by modified method.8 The diluted working solutions of the test extracts were prepared in ethanol. Gallic acid was taken as standard in 1-100μg/ml solution. 0.002% of DPPH was prepared in methanol and 1ml of this solution was separately mixed with 1ml of sample solution and standard solution. These mixtures were kept in dark for 30 min and optical density was measured at 517nm using Cecil-Elect Spectrophotometer. Methanol (1ml) with DPPH solution (0.002%, 1ml) was used as blank. The optical density was recorded and % inhibition was calculated using the formula given below.

By using IC50 value the antioxidant activity of extract were tested.

The antiulcer activity was evaluated in pylorus ligated rats with modifications described by Kulkarni.6

The data is presented as mean±SEM. The statistical significance was determined using one-way ANOVA followed by Dunnett’s test. p<0.05 was considered significant. The biochemical parameters such as the Total acidity, free acidity, PH, Total protein, Pepsin content and Mucin content were assessed in all the groups of animals.

The statistical significance was assessed using one-way analysis of variance (ANOVA) followed by Dunnett’s test. For comparing the nonparametric ulcer scores, ANOVA followed by non-parametric Dunn posttest was used. The values are expressed as mean SEM and p<0.05 was considered significant.

The outcome of the preliminary phytochemical screening showed the presence of alkaloids, glycosides, carbohydrates, steroids, triterpenoids, saponins, tannins and aminoacids.

The acute toxicity of the ethanolic extract of Smilax perfoliata was carried out following OECD guideline no. 423. No signs of any abnormality up to 4-6 hrs or mortality observed up to a period of 72 hours were seen in both the group of animals employed in the study. 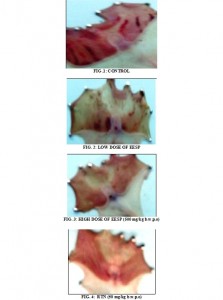 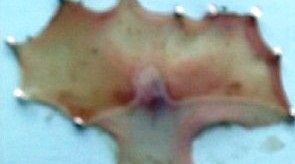 DISCUSSION: The evaluation of the Anti-Ulcer and Antioxidant activity of the ethanolic leaves and fruit extract of Smilax peroliata in albino rats was conducted by means of pylorus ligation induced gastric ulcers model and by DPPH free radical scavenging antioxidant method. The phytochemical evaluations of the leaves and fruit extract obtained showed the presence of alkaloids, glycosides, carbohydrates, tannins, triterpenoids, steroids, saponins and amino acids. Literature survey suggests that Smilax perfoliata is reported for its antidiabetic 8, antiepileptic 9, and hepatoprotective 12 properties. In the present study, the results indicated a decrease in the Ulcer score and Total acidity in the treated group of animals which can be related as the major ulcer producing source.

AKNOWDLEDGEMENT: The authors want to express their humble gratitude and respect to their Parents, Professors and Friends for their help and encouragement during the study.