INTRODUCTION: Pomegranate Known as in (English – Pomegranate, Hindi – anar, Telugu – danimma ) for the present study five varieties  have been used (Bhagwa, Arakta Mrudula G-137, Ganesh.) it is  a fruit-bearing deciduous  shrub or small tree growing between 5–8 meters (16–26 ft). There are over thousand cultivars of Punica granatum 1 originating from the Middle East, extending throughout the Mediterranean, eastward to china.

Punica granatum (pomegranate) has potential for prevention and treatment of inflammation and cancer 2-6 Quantification of phenols, flavonoids, anthocyanin in pomegranate including antioxidant capacity of different extracts from different parts of the plant 7-8 The pomegranate is a symbol of life, longevity, health, femininity, fecundity, knowledge, morality, immortality and spirituality, if not Divinity 9  In ayurvedic medicine the pomegranate is considered” a pharmacy unto itself,” it shows antihelmintic and vermifuge properties 10   it possess various pharmacological and toxicological properties including antioxidant, anti-inflammatory by inhibiting pro-inflammatory cytokines), anti-cancer and anti-angiogenesis activities 11 -13. The pomegranate juice are powerful astringent and cures diarrhea and oralaphthae, “refrigerant    and “blood tonic” 14

Ten grams of sample (fruit) was thoroughly crushed and homogenized in mortar pestle with10 ml of 80% acetone and the extract was centrifuged at 10000 rpm   for 15 min at 40⁰C and  and the supernatant was combined with initial extract, and this was used for the estimation of phenols 15

Total phenol contents in the extracts were determined by the modified Folin ciocalteau method 16 Wolfe (2003). An aliquot of the extract was mixed with 5ml folin-ciocalteau reagent (diluted with water 1:10 v/v) and 4ml (75 g/l) of sodium carbonate. The tubes were vortexed for 15 sec and allowed to stand for 30min at 40⁰c for color development. Absorbance was then measured at 765 nm using Shimadzu 160A UV-VIS double beam spectrophotometer samples of the extract were evaluated at a final concentration of 0.1mg/ml. Total phenol content was expressed as mg/g gallic acid equivalent using the following equation based on the calibration curve: y= 0.126x, R2=0.9365, Where x was the absorbance and y was the Gallic acid equivalent (mg/g).

Total flavonols in the plant extracts were estimated using the method of 17. To 2.0 ml of the sample, 2.0 ml of 2% AlCl, ethanol and 3.0ml (50g/l) sodium acetate solutions were added .The absorption was read at 440nm by Shimadzu 160A UV-VIS double beam Spectrophotometer was read after 2.5h at 20⁰c. Extract samples were evaluated at a final concentration of 0.1mg /ml. The total flavonols content was calculated as quercetin (mg/g) using the following equation on the calibration curve: y=0.0255x, R²=0.9812, where x is the absorbance and is the quercetin equivalent.

Aluminium chloride colorimetric method was used for the determination of flavonoids 18. Each plant extracts (0.5ml) in methanol were separately mixed with 1.5 ml of methanol, 0.1 ml of 10% aluminum chloride, 0.1ml of 1M potassium acetate and 2.8 ml of distilled water. It remained at room temperature for 30 minutes: the absorbance of the reaction mixture was measured at 415nm with a Shimadzu 160A UV-Visible double beam spectrophotometer. Expressed in mg/g.

Determination of proanthocyanidins was based on the procedure reported by 19 A volume of 0.5 ml of 0.1mg /ml of the extract solution was mixed with 3ml of 4% vanillin-methanol solution and 1.5ml of HCl, the mixture was allowed to stand for 15min. The absorbance was measured by Shimadzu 160A UV-VIS double beam Spectrophotometer at 500nm. Extract Samples were evaluated at a final concentraton of 1.0mg/ml. Total proanthocyanidin content were expressed as catechin equivalents (mg/g) using the following equation based on the  Calibration curve; y=0.5825x, R²=0.9277, where x was the absorbance and y is the catechin equivalent (mg/g).

Ten grams of the   fresh sample was thoroughly mashed in 70% (v/v) ethanol in water, and kept overnight at room temperature. The extracts were filtered and centrifuged at 4°C at 8000 rpm for 10 minutes stored in refridgerator 19-20.

The 10gm of the fruit or leaf was dehydrated at 60°C to constant moisture content. Moisture content was determined in dried samples according to 23  1 g of the sample was dissolved in 20 mL petroleum ether and 3 ml chloroform mixture, and filtered and made to various concentration of supernatant by taking 1, 2, 3, 4 and 5 ml of the filtrate in 100 ml volumetric flask and diluted with petroleum ether. The absorbance was measured by Shimadzu 160 A UV-VIS double beam Spectrophotometer at 648nm, 663nm and 452nm by using 1 ml chloroform and 20 ml petroleum ether as blank.

Carotene was determined according to the method of 25 the dried methanolic extract (100mg) was vigorously shaken with 10ml of acetone – hexane mixture (4:6) for 1min. The absorbance of the filtrate was measured at λ = 453, 505, 645 and 663 nm by Shimadzu 116 A UV-VIS Spectrophotometer.

Phenolic content of the five varieties Punica granatum species extract was highest in G-137 (11.8±0.11 mg/g dry wt.) followed by Arakta> Mrudula> Ganesh and the least phenolic content was observed in Bhagwa (4.0±0.3 mg/g dry wt) and significant difference was observed within the varieties. similar studies were done by 274mg/g 26- 27 the values are significant (p<0.05) the relationship among FRAP, phenol and flavonoid in peel is not significant, therefore the high antioxidant activity in peel is not depended to the phenolic and flavonoid contents have reported the antioxidant activity of pomegranate peel in comparison with the pulp extract their report showed similar ratio antioxidant activity for peel-pulp extract.

And according to  28-  29 have reported a systematic evaluation of natural phenolic antioxidants from 133 medicinal plants in India, polyphenols are secondary metabolites which are derivatives of the pentose phosphate, shikimate and phenyl- propanoid pathways in plants, phenols are one of the most occurring phytochemicals in plants including fruits pericarp.

In addition to their contribution to color and sensory characteristics of fruits and vegetables, phenols play a very important role in providing protection against in vivo and in vitro oxidation the higher reducing power indicated presence of reductones which are able to break free radical chains by donating hydrogen atoms and thus converting them to a more stable non-reactive species since the reducing power was directly related to the phenol content (Table 1: Fig. 1)

Each value in the table is represented as mean ±SE (n=3) of triplicates, statistically significant   (p<0.05) and are expressed in mg/g dry wt.

Flavonoid content in five varieties of Punica granatum varieties highest was recorded in Mrudula (3.5±0.05 mg/g dry wt) followed by decreasing order and least in G-137 (0.2±0.003 mg/g dry wt). The values are significant (p<0.05). Similar studies was done by in berries and the results were recorded higher (Table 1, Fig. 1) 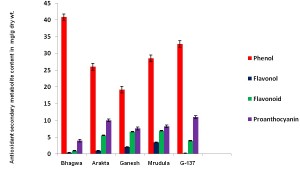 Proanthocyanin content in five varieties of Punica granatum species varieties of extracts was highest in Bhagwa (19.62±0.05 mg/g dry wt) and least in Mrudula (3.3±0.03 mg/g dry wt) the values are significant p<0.05). Similar studies was done on juice and peels of pomogranate and results were maximum according to 33 (Table 1, Fig. 1)

Anthocyanin content in five varieties of Punica granatum species varieties of extracts was highest in Bhagwa (40.8±0.3 %) followed by least content in (19.62±0.05 %) (Table 3) (Fig.3), the values are significant (p<0.05). Similar studies were done on juice and peels of pomegranate according to 34 and the results were recorded higher. Anthocyanin studies were done on blueberries and strawberries and the results were recorded maximum. (Table 2, Fig. 2)

Each value in the table is represented as mean ±SE (n=3) of triplicates, statistically significant (p<0.05) and are expressed in percentage 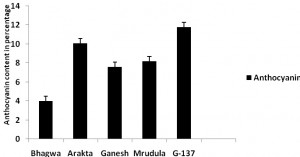 The ascorbic acid content in the five varieties of   Punica granatum varieties was highest in Bhagwa (0.95±0.586 %) followed by decrease in content of ascorbic, Ganesh, Arakta, Mrudula and the least content was observed in G-137 (0.51±0.05 %), similar studies were done in sour summer variety of pomegranate recorded more content 2.35 mg/ g, the values are significant (p<0.05), ascorbic acid an antioxidant vitamin plays a primary role to neutralize free radicals. Ascorbic acid is an water soluble compound, which helps to work both inside and outside the cells to control the free radical damage. Vitamin C is capable of neutralizing reactive oxygen species in the aqueous phase before lipid peroxidation is initiated. The possible ant carcinogenic effect of vitamin C appears to be related to its ability to detoxify carcinogens or block carcinogenic processes through its action as an antioxidant or as a free radical scavenger .Reports suggest that vitamin c reduce the risk of chronic diseases such as cancer   and cardiovascular disease and cataract, (Table 3: Fig.3)

Each value in the table is represented as mean ±SE (n=3) of triplicates, statistically significant (p<0.05) and are expressed in percentage. 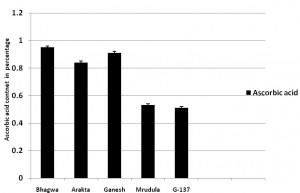 Total carotenoid content in the  five varieties of Punica granatum the highest  content was seen in, Mrudula (10.2±0.1mg/g Fr wt.) followed by Bhagwa, Arakta, Ganesh and the least was observed in G-137( 0.46±0.05 mg/g Fr wt.) the values are significant (p<0.05). According to 35, similar work was done and the content was recorded less, carotenoids are important pigments which play a major role in the protection of plants against photo oxidative processes; they are efficient antioxidants scavenging singlet molecular oxygen and peroxyl radicals. In human beings carotenoids are again part of the antioxidant defense system. (Table 4: Fig. 4)

Each value in the table is represented as mean ±SE (n=3) of triplicates, statistically significant (p<0.05) and are expressed in mg/g Fr wt. 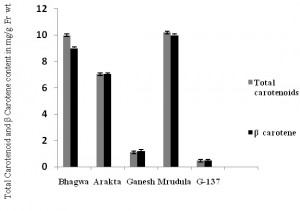 CONCLUSIONS: Pomogranate is been used in many purposes for the human health point of view, and this study Bhagwa variety was showing maximum antioxidant activity, and phenol being highest ,phenol groups dominant in majority of plants ,and the varieties  showed much variations in the antioxidant- phytochemical  studies .The phytochemical compounds present in the fruit has to been evaluated and exploited within these varieties, pomegranate’s chemistry and medicinal potential, the  beginnings  of  a  possible  use  for  the  fruit  in  cancer  chemoprevention.