ABSTRACT: The aim of the present study was to determine the antibacterial activity of crude extracts from root parts of Catharanthus roseus against several bacterial species of clinical significance. Root part of C. roseus was extracted in appropriate solvent followed by evaluation of antibacterial activity by agar well diffusion assay against a total of eight bacterial stains. Further, minimum inhibitory concentration(s) was evaluated for the crude extracts. Among all the extracts, the chloroform extract was found to be most active against almost all the bacterial species tested. Gram-positive bacteria were found more sensitive than Gram-negative bacteria. Other focuses included the determination of antioxidant activity using DPPH assay and IC50 (Inhibitory concentration) values were also determined using broth dilution assay. Preliminary phytochemical screening of the crude chloroform extract revealed the presence of alkaloids, flavonoids, tannins, saponins, proteins and phenolics. The study promises an interesting future for designing potentially active antibacterial agents from Catharanthus roseus.

INTRODUCTION: Plants have proved to be significant natural resources for medicines; documentation of their use in medicine originates from ancient times. Ethnobotanical and ubiquitous plants provide a rich resource for natural drug research and development 1.

Medicinal plant-based drugs have the added advantage of being simple, effective and offering a broad spectrum of activity with greater emphasis on preventive action 2.

The global interest in the medicinal potential of plants during the last few decades is therefore quite logical.  In the recent years interest in the study of antioxidant activity of plant extracts and isolation from plants has grown due to the fact that the free radicals have been related to degenerative diseases 4.

Antioxidants are compounds which act as radical scavengers when added to the food products and prevent the radical chain reaction of oxidation, delay or inhibit the oxidation process and increase shelf life by retarding the processes of lipid peroxidation 5.

The present study involves Catharanthus roseus L (apocyanaceae) also known as Vinca Rosea, is native to the Caribbean Basin and has historically been used to treat a wide assortment of diseases. European herbalists used the plant for conditions as varied as headache to a folk remedy for diabetes. It has more than 400 known alkaloids, some of which are approved as antineoplastic agents to treat leukemia, Hodgkin's disease, malignant lymphomas, neuroblastoma, rhabdomyosarcoma, Wilms' tumor, and other cancers. Its vasodilating and memory-enhancing properties have been shown to alleviate vascular dementia and Alzheimer's disease 6, 7. The two classes of active compounds in Vinca are alkaloids and tannins. The major alkaloid is vincamine and its closely related semi-synthetic derivative widely used as a medicinal agent, known as ethyl-apovincaminate or vinpocetine, has vasodilating, blood thinning, hypoglycemic and memory-enhancing actions 8, 9. The extracts of Vinca have demonstrated significant anticancer activity against numerous cell types 10.

Materials and Chemicals: The root part of Catharanthus roseus was collected from the sandy beaches of Kanyakumari, Tamilnadu, India, in the month of March 2012. This plant was identified and authenticated by Dr. S. Jeeva, Department of Botany, Scott Christian College (Autonomous), Kanyakumari, Tamil Nadu, India. Voucher specimen of this plant was deposited at herbarium of this institute (voucher no. SCCN 3353).

All chemicals and solvents were of analytical grade (RANKEM). The root part was washed and air dried over a period of one month. The dried samples were milled into a fine powder by pounding manually with a clean, sterile mortar, stored in sterile cellophane bags in a cool dry place till further use.

Extraction: Dried samples of 100grams were extracted in a Soxhlet sequentially in 1000ml of hexane, chloroform, ethyl acetate, methanol and aqueous. The process was run for 24hr after which the sample was concentrated using reduced pressure distillation under vacuum pump and freeze dried to powdered form.

The dried extracts were weighed and kept in labeled sterile specimen bottles.

Well diffusion assay:  Nutrient agar was prepared and poured in the sterile petri dishes and allowed to solidify. 24 h growing bacterial cultures (Escherrichia coli, Proteus vulgaris, Klebsiella pneumonia, Staphylococcus aureus, Micrococcus luteus, and Bacillus subtillis) were swabbed on it. Then, 5 wells (8mm diameter) were made by using a sterile cork borer. The 4 different concentrations (250µg, 500µg, 750µg and 1000µg) of the plant extracts were loaded in the wells. Sterile distilled water served as negative control. The plates were then incubated at 37ºC for 24h. After incubation the inhibition diameter was measured 11.

Broth dilution assay: Dilution assays are the standard method used to compare the inhibition efficiency of the antimicrobial agents. 5ml of the Nutrient broth, 0.1ml of the 24 h growing cultures (Staphylococcus aureus) and the different concentration (100µg, 200µg….1000µg) of the plant extract (dissolved in DMSO) were added to the tubes and were incubated at 37ºC for 24 h. The optical densities were measured Spectrophoto-metrically at 600 nm. The percentages of viable cells were calculated using the following formula 12;

DPPH assay: (2, 2-diphenyl-1-picrylhydrazyl): The Radical Scavenging Activity of different extracts was determined by using DPPH assay 13 with small modification. The decrease of the absorption at 517nm of the DPPH solution after the addition of the antioxidant was measured in a cuvette containing 2.960 μl of 0.1mm ethanolic DPPH solution mixed with 20 to 200μg/ml of plant extract and vortexes thoroughly. The setup was left in dark at room temperature and the absorption was monitored after 20 minutes. Ascorbic acid was used as references. The ability of the plant extract to scavenge DPPH radical was calculated by the following equation:

Antibacterial activity of C. roseus: In the present study, the five different solvents of C. roseus crude extracts were selected for antibacterial activity on eight – different organisms in four different concentrations are given in Table 1. Among the five different extracts of C. roseus, chloroform extract shows highest antibacterial activity against Bacillus subtillis, Micrococcus luteus and Staphylococcus aureus and with the zone of inhibition 17, 18 and 18mm respectively. Gram positive organism had been more sensitive than Gram negative organism. Hexane and water extract shows activity only in Gram positive species.  Ethyl acetate extract possesses considerable activity against all the bacterial species. Methanol extract shows better activity against Micrococcus luteus and Staphylococcus aureus. But it inhibits both the organisms in 500µg concentrations. It is the minimum inhibitory value of this extract. Chloroform extract inhibits all the tested organisms in 250µg concentrations. So it was considered better to extract than others. From these results were revealed the chloroform extract should be more effective than the other extracts. Among all the extracts, the chloroform extract was found to be most active against almost all the bacterial species tested. So, this was selected as a best screened extract and also used for further studies.

Table 2 indicates IC50 determination is also submitted by using the Broth dilution assay. It reveals the maximum susceptibility of use antibiotic with the bacterial strain. The IC50 values of the plant extracts, which were found to be, vary from 19.32 to 69.43 for chloroform extract.

The percentage of inhibition should be increased with increasing concentrations. Chloroform extract shows 50 percent inhibitory value was 50.08 at 700µg. It should be very clearly determined to Figure 1. 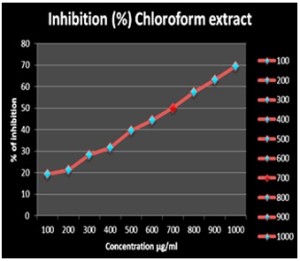 The scavenging activity of chloroform extract should higher than the standard in all concentrations. It possesses the remarkable antioxidant value in 180 and 200µg.  It was clearly dedicated in Figure 2.

Preliminary phytochemical analysis: Phyto-chemicals are non-nutritive plant chemicals that have protective or disease preventive properties. They are nonessential nutrients, meaning that they are not required by the human body for sustaining life. It is well-known that plant produces these chemicals to protect them but recent research demonstrates that they can also protect humans against diseases. There are more than thousand known phytochemicals. Most phyto-chemicals have antioxidant activity and protect our cells against oxidative damage and reduce the risk of developing certain types of cancer. 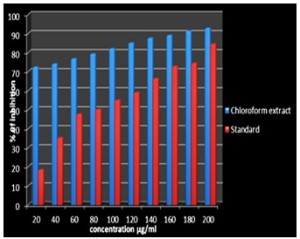 The preliminary phytochemical screening tests for the crude extracts of C. roseus root revealed the presence of tannins, saponins, flavonoids, alkaloids, glycosides and phenolics (Table 4). Any of these secondary metabolites, singly or in combination with others could be responsible for the anti-bacterial activity of the plant.

The presence of tannins, saponins, flavonoids, alkaloids, glycosides and phenolics has potentially significant application against human pathogens, including those that cause enteric infections.

The presences of alkaloids interesting as significant quantities are used as antimalarials, analgesics and stimulants 15.

The presence of glycosides moieties like saponins, glycosides and flavonoids, which are known to inhibit tumor growth and also serve to protect against gastrointestinal infections are one of the pharmacognostic importances and give evidence for the use of the plant in ethno medicine 16.

Tannins are widely used in traditional medicine in treating wounds and arrest bleeding 17.

Some of these bioactive compounds which are synthesized as secondary metabolites as the plant grows also serve to protect the plant against microbial attacks and predation by animals.

CONCLUSION: In this present study evaluated in vitro antioxidant activity of crude chloroform extract of C. roseus. The results of this study also revealed that the zone of inhibition was different for different extracts of C. roseus against different microorganisms tested. The highest inhibition zone of 17, 18 and 18 mm was exerted by C.roseus against Bacillus subtillis, Micrococcus luteus and Staphylococcus aureus when compared to other microorganisms. Hence the present study supports the view that these medicinal plants might be useful as an antioxidant and antimicrobial agents.

ACKNOWLEDGMENT: The authors sincerely thank Professor Dr. Godwin Wesly for rendering his suggestions and helping them in each and every step of completing this research paper successfully.