ABSTRACT:  Bone marrow aspiration can determine the metastatic deposits, degree of cellularity and fibrosis readily. A retrospective analysis of bone marrow aspiration and biopsy, in children and adult patients with hematological anomalies, were performed in 674 cases for different indication of hematological abnormalities from January 2013 to March 2014. Cases were analyzed in detail regarding clinical, hematological examination and family history. The mean age of the patients was 38.03 years ranging from 2 years to 78 years. Among 674 cases, 58.16 percent cases were male and 41.84 percent were female with sex ratio of 1.4:1. The commonest clinical & physical symptoms were pallor (87.5%), followed by weakness & headache (47.9%) and fever (37.9%). The most frequent malignant hematological anomalies in children (99.9%) and adults (50.49%) were acute leukemia, followed by multiple myeloma (17.82%) in adults only. Normoblastic marrow represented highest number of cases both in children (21.43%) and in adults (20.86%) as non-malignant hematological disorder. Bone marrow examination helps to assess the spectrum of hematological disorder in both children & adults within a short span of time. In the present study, males were more affected from hematological disorders than females whereas acute leukemia had the highest occurrence among the malignant hematological disorders in both pediatric and adult patients.

INTRODUCTION: World health organization associated health group reported in 2013, the concentrations of mean hemoglobin were lowest and anemia prevalence was highest in south Asia and central and west Africa. In India, the prevalence of anemia was severe (>35 %) in preschool-age children and pregnant women.1

Ministry of Health & Family welfare, India reported in 2011 that over 40% of children and 36% of adults and women are undernourished, with the persistent level of malnutrition, which is of great concern.2 Bone marrow examination (BME) helps to assess the spectrum of hematological disorders in both children & adults within a short span of time.

Bone marrow was first obtained from living patients for diagnostic purposes during the first decade of the 20th century but it was not until the introduction of sternal aspiration in the late 1920s which became an important diagnostic procedure.3 Bone marrow aspiration can determine the metastatic deposits, degree of cellularity and fibrosis readily.  The bone marrow picture may vary depending on the etiology, from normocellular with non specific changes to hypercellular being replaced completely by malignant cells. Clinical, hematological and morphological peripheral blood and bone marrow characteristics reveal diagnostic clues and pathognomonic features of the disease. Bone marrow aspiration (BMA) examination is one of the most frequent and relatively safe invasive procedures. Though an invasive procedure, it can be easily performed even in the presence of thrombocytopenia with little or no risk of bleeding.4

Few studies have been performed to evaluate the spectrum of hematological disorders in developing and developed countries; however, none of the study has been performed until now in Rajasthan, the largest state of India. 5, 6 The present study was designed to evaluate the clinical & etiological spectrum, occupation based history and bone marrow findings in children and adults patients with hematological anomalies in this part of Northern region of India.

Study participants: A retrospective analysis of bone marrow aspiration and biopsy were performed in 674 cases for different indications of hematological abnormalities from hematology clinics at Santokba Dhurlabhji Memorial Hospital & Research Institute during the period of January 2013 to March 2014. This study was approved by the Departmental Ethics Committee. The written consents were obtained from all the patients for their participation in the study.

Bone marrow analysis: Bone marrow was aspirated from posterior superior iliac spine by ‘BD Spinal Needle 18GA 3.5IN’ and slides were prepared according to the standard procedures.3,11 For the assessment of bone marrow cellularity and of iron stores, aspirates were stained with May-Grunwald-Giemsa and Perls’ stain, respectively.

The bone marrow trephine biopsy samples (2 cm in length) were taken from the same site by ‘Rup’s Bone Marrow Biopsy Needle’ and stained with Hematoxylin and eosin. Interpretation of biopsy material was done according to the cellularity comparison of the relative proportions of myeloid, erythroid and megakaryocytic cells, other bone elements and reticulin. The overall cases were distributed in two groups as following: 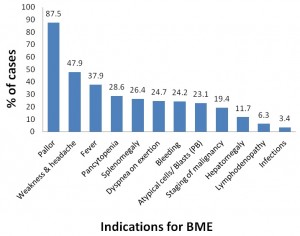 FIGURE 1: DISTRIBUTION OF THE PATIENTS ACCORDING TO INDICATIONS FOR BONE MARROW EXAMINATION.

In the final diagnosis, among 125 hematological malignancies, distribution of acute leukemia was the highest in both children (99.9%) and adults (50.49%). Further, in adults, multiple myloma (MM), chronic lymphoid leukemia (CLL), chronic myeloid leukemia (CML), metastatic carcinoma and Hodgkins lymphoma were observed in 17.82, 11.88, 8.91, 5.94 and 4.95 percent cases respectively as seen in (Table 1).

TABLE 1:  COMPARISON OF HEMATOLOGICAL ANOMALIES IN CHILDREN AND ADULT (MALIGNANT).

Most common malignant hematological anomaly was acute Myloid leukemia (46.4%) whereas least was Hodgkings lymphoma (4.0%). Out of 549 non-malignant hematological anomalies, normoblastic marrow was diagnosed in the highest number of cases 115 (20.95%) in which pediatric cases were 18 (21.43%) while adult cases were 97 (20.86%) in respective group. Other cases of bone marrow abnormalities are shown in (Table 2). Comparative studies regarding sex, mean age and common causes are shown in (Table 3).

TABLE 2:  COMPARISON OF HEMATOLOGICAL ANOMALIES IN CHILDREN AND ADULTS (NON-MALIGNANT).

Most common non-malignant hematological anomaly was Normoblastic marrow (20.95%) whereas least was Megakaryotic thrombocytopenia (0.73%).

DISCUSSION: Hematological disorders are the major global public health problem affecting both developing and developed countries with severe consequences for human health as well as socio-economic development. 1 These occur at all stages of the life cycle but are more prevalent in the pregnant women and young children. Anemia is an indicator of both malnutrition and poor health. The most dramatic health effects of anemia, i.e. increased risk of maternal and child mortality, have been well reported by World Health Organization in the 2013 and Ministry of Health & Family Welfare, India.1, 2

In the present study, sex ratio is 1.4:1 which is higher than previous studies carried out in different parts of India. 4, 10 and Western Asia. 8 However, such ratio is found to be lower in comparison to Pakistan 7, Bangladesh 5 and Iraq. 9 Median age in this study was 38.03 years reflecting the predominant age group between 3rd and 4th decade which is higher (13 years) to the study by Jha A 8 in Nepal whereas lower (46.16 years) to the study by Saeed et al in Iraq.9 Pallor was the most common clinical presentation (87.54% cases) which is solely or partly associated with other features and also

noted in previous studies.4, 10 Body weakness and headache were the second most common clinical presentation in 47.92% cases. Fever accounted for 37.98 % cases and pancytopenia for 28.64% cases which are comparatively lower than the other studies.11

Overall, acute leukemia was diagnosed in 58 (46.4%) cases out of the total 125 cases of malignant hematological anomalies, 18 (58.33%) pediatric cases out of 24 cases and 44 (43.56%) adults out of 101 cases. Such incidences were higher to other study performed in Iraq. 9 Multiple myloma, found in 14.4% adult cases, was also higher than the previous studies.4, 9 CLL, CML and Metastatic carcinoma were diagnosed in 13.6%, 7.2% and 4.8% cases respectively, in adults only. Hodgkins lymphoma was the least common hematological malignancy in the adults (4.0%). It is primarily a disease of lymphatic system and hence rarely involves the bone marrow.

In our study, most common diagnosis in nonmalignant group was normoblastic marrow followed by megaloblastic anemia. Nigam et al 10 reported overall 41.81% cases of megaloblastic anemia as unusually high in central India.  The findings of present study are similar to others as majority of cases were megaloblastic marrow (12.75%) in comparison to 12.3% reported by Pudasaini et al 11 in Nepal & 14.6% reported by Khan et al 7 in Pakistan. Furthermore, the commonest causes of hematological abnormalities reported in different studies across the South-West Asian countries 5, 7, 8 have been aplastic anemia, megaloblastic anemia and acute leukima. The salient findings of various studies on hematological disorders are summarized in (Table 3), however, they have different geographical locations, nutritional practices and life styles.

In the present study, more than 80% (541) cases belonged to rural, sub-urban region and agricultural backgrounds, with lower socio-economic status and lack of appropriate education, therefore, they had exposure to various risk factors coincidently and finally faced to haematological abnormalities.

The clinical findings and bone marrow examination provide precious information to help in planning investigations, such as immunophenotyping and cytogentic studies. In addition, an early recognition of the underlying conditions will certainly have an impact on the mortality and morbidity in vulnerable patients for better prognosis. However, maximum diagnostic yield can be achieved by the clinico-pathological correlation and enormous data analysis. Further, long term follow-up is required to observe the profile, spectrum and prognosis of the hematological diseases.

CONFLICT OF INTEREST: The authors declare that we have no conflict of interest.

ACKNOWLEDGEMENT: The study was supported in part by the University Grants Commission, Government of India, New Delhi. We thank the physicians and patients who provided bone marrow biopsy slides for review.