ABSTRACT: Objectives: The study aimed at evaluating the broncho-relaxant effect of the test drug Flupirtine in experimentally induced Asthma in Guinea pigs & compares its efficacy with the Standard. Materials and Methods: Guinea pigs of both sexes weighing around 350-400 gm were randomly divided into 3 groups of 6 animals each. Groups were categorised into Control, Standard and test groups. Animals serving as controls received 10 ml/kg body weight of Normal saline; Standard group received 4.5 mg/kg body weight of salbutamol & the test group received the test drug flupirtine in doses of 46.5 mg/kg of body weight. All the compounds were administered once a day, per orally, through a gavage tube for 5 days. On day 5 experimental bronchial asthma was induced by exposing animals to 0.25% histamine acid phosphate under constant pressure (40mm/Hg) in an aerosol chamber. Animals exposed to histamine aerosol developed progressive dyspnoea. Pre-convulsive time (PCT) was determined from the time of exposure to onset of dyspnoea, immediately before the appearance of convulsions. Greater the PCT more is the bronchial smooth muscle relaxant effect. Results: There was a significant increase in Pre-convulsive time in the test group when compared to the control group suggesting bronchial smooth muscle relaxant activity of the test drug Flupirtine. Conclusion: Flupirtine capable of mediating a reduction in contractile & inflammatory responses would be a promising drug combining broncho-dilatation with anti-inflammatory action. However further preclinical & clinical studies are warranted.

INTRODUCTION: Chronic Respiratory Diseases (CRD) is one of the most common cause of disease burden, both globally and in India. CRD includes Bronchial Asthma & Chronic Obstructive Pulmonary Disease (COPD) which together may account for an estimated burden of about 100 million individuals in India currently 1. Asthma is a chronic inflammatory disorder characterised by airway hyper-responsiveness to a variety of stimuli. It results from a complex interaction between inflammatory mediators & airways.

Short-term relief, mainly aiming at relieving broncho-constriction is most effectively achieved by agents that relax airway smooth muscle, of which β-adrenergic agonists are most potent & widely used. Long-term control is achieved with an anti-inflammatory agent such as an inhaled corticosteroid and in part with a leukotriene pathway antagonist or an inhibitor of mast cell degranulation 2. Most asthmatics respond well to the available treatments of corticosteroids and β-adrenergic agonists; however, 5–10% has severe disease that responds poorly.

However, adverse effect profile and gradual non –responsiveness to the current pharmacotherapy in asthma necessitates evaluation of newer targets. Recent insights into the molecular  mechanisms of airway inflammation & broncho-constriction  has  led to exploration of novel targets in drug therapy  of Asthma and other disorders of  airway requiring broncho-dialatation. Evidences of the presence of ions channels like K+ channels, receptors like GABA, NMDA & their essential role in the regulation of airway diameter, suggests that they may be targeted pharmacologically to relieve airway hyper-constriction.

MATERIALS AND METHODS: Healthy adult guinea pigs of either sex weighing around 350-400 grams were obtained from Central Animal Facility of JSS Medical College, Mysore, after having received the approval for the study proposal by Institutional Animal Ethical Committee. Animals were randomly divided into 3 groups of 6 guinea pigs each. Groups were categorised as Control, Standard and test groups. Animals serving as controls received 10 ml/kg body weight of Normal saline; Standard group received 4.5 mg/kg body weight of salbutamol and the test group received the test drug flupirtine in doses of 46.5 mg/kg of body weight. All the compounds were administered once a day, per orally, through a gavage tube for a period of 5 days. On 4th day, animals were housed in the aerosol chamber for acclimatization. On 5th day, one hour after drug administration experimental bronchial asthma was  induced in guinea pigs by exposing them to 0.25%  histamine acid phosphate aerosol under constant pressure (40mm/Hg) from  an inbuilt nebuliser of the aerosol chamber 3 (M/s Inco, Ambala). Animals exposed to acetylcholine aerosol developed progressive dyspnoea. Pre-convulsive time (PCT) was determined from the time of exposure to onset of dyspnoea, immediately before the appearance of convulsions. Just after the PCT was noted, the animals were removed from the aerosol chamber, placed in fresh air & allowed time to recover. Greater the PCT more is the bronchial smooth muscle relaxant effect 4. The Percentage protection offered by the treatment was calculated by using the formula:

Where T1= the mean of PCT of control group.

T2= the mean of PCT of test group.

RESULTS: Data analysis was done by one-way analysis of variance (ANOVA). Probability values of 0.05 or less were considered statistically significant. The mean exposition time on acetylcholine exposure which corresponds to the time the animals withstood the acetylcholine exposure before the development of dyspnoea leading to the appearance of convulsions, was greater in the test group (95.03±3.70) when compared to the control group (50.5 ± 2.42) as shown in the Table 1. Percentage protection offered by the treatment was found to be 46.9 % in the test group while it was calculated to be 72.9 % in the standard group, depicted in the Fig. 1.

TABLE 1: EFFECT OF THE TEST DRUG, FLUPIRTINE ON THE EXPOSITION TIME OF GUINEA PIGS AFTER EXPOSURE TO 10% ACETYLCHOLINE AEROSOL

n = 6 in each group; Values are in Mean + SD. Data was analysed by one way ANOVA 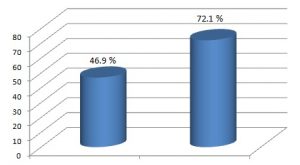 FIG. 1: REPRESENTS THE PERCENTAGE PROTECTION OFFERED BY THE TREATMENT IN TEST GROUP IN COMPARISON TO STANDARD

Above findings suggest a significant broncho-relaxant activity of the test drug, flupirtine.

DISCUSSION: In asthma and other lung diseases, airways can become hyperconstricted because of increase in local bronchoconstrictor concentrations {e.g., histamine released from mast cells or acetylcholine released as a neurotransmitter.} These substances activate Gq/11-coupled receptors on airway smooth muscle cells (ASMCs) in the walls of the bronchioles, resulting in contraction of the ASMCs and hence constriction of the airways.

ACKNOWLEDGEMENTS: We are thankful to the department of Pharmacology, Central Animal Facility, JSS Medical College for the technical support and encouragement.