ABSTRACT: Myocardial infarction develops due to ischemia induced oxidative stress. Averrhoa Carambola fruit (ACF) is reported to possess strong antioxidant activity which may protect the heart against isoproterenol (ISO) induced myocardial infarction (MI) in rats. To evaluate this activity Averrhoa carambolafruit extract (ACFE) (200mg/kg & 400mg/kg, p.o) was administered to male wistar rats (180-250g) for 21days. At the end of this period, all the rats except rats of normal control group were administered ISO 85mg/kg intraperitonially, for 2 consecutive days to induce MI. After 48 hrs, rats were sacrificed and the level of cardiac biomarker enzymes like cardiac troponin-T (cTn-T), creatinine kinase (CK-MB) and lactatedehydrogenase1(LDH1) in serum were estimated. Also antioxidant parameters likeglutathione (GSH), malondialdehyde (MDA), catalase and superoxide dismutase (SOD) were estimated in heart tissue homogenate and histopathology of heart tissue was performed. Our results suggest that pretreatment of animals with ACFE maintain near normal levels of cardiac biomarker enzymes and antioxidant enzymes in both treatment groups (ACFE 200mg/kg, 400mg/kg) when compared to ISO treated group.  Histopathological findings of infarcted hearts treated with ACFE showed reduction in necrosis, infiltration of leucocyte and inflammation as compared to isoproterenol treated group.Thus the present study provides experimental evidence that hydro alcoholic extract of Averrhoa carambola fruit possess strong antioxidant properties which protect the myocardium against isoproterenol induced infarction

INTRODUCTION: Myocardial infarction (MI) or Heart attack is the leading cause of mortality for both men and women in developed and developing countries.1 It is a clinical syndrome which arises due to imbalance between coronary blood supply and myocardial demand resulting in insufficient blood supply to myocardium leading to development of a condition known as ischemia.2

Ischemic tissue generates oxygen derived free radicals such as superoxide anion (.O2) and hydroxyl radicals (.OH) which are involved in the formation of lipid peroxidase and damage of cell membrane due to oxidative stress often leading to chain reactions which contribute to cell death 3 Prolonged ischemia of myocardium leads to necrosis which is referred as myocardial infarction.4 Although clinical care is improved, public awareness is raised and health innovations are widely used, myocardial infarction remains the leading cause of death worldwide.

In developed countries myocardial infarction accounts for 10-25% of all deaths.5 According to World Health Organization (WHO) it will be the major cause of death in the world by the year 2020,6 despite the availability of various drugs for treatment of myocardial infarction, post myocardial infarction syndrome still poses a major problem.7 Since ancient times natural products are used for relief and cure of disease by humans.8  In recent years, interest in natural products as a novel way to treat cardiovascular diseases has increased.9 Treating MI after its occurrence would be a costly affair, hence prevention would always be better.10

Prevention of cardiovascular diseases has been associated with the ingestion of fresh fruits, vegetables or plants rich in natural antioxidant phytoconstituents like flavonoids, tannins, proanthocynidins, L-ascorbic acid, quercetine and rutin.11,12 Hence in the present study, an attempt has been made to evaluate cardioprotective effect of Averrhoa carambola fruit against ISO induced oxidative stress leading to MI.

The fruits of Averrhoa carambola were procured from the local market and were identified and authenticated by Dr. D. B. Patel, Professor & Head, Department of Genetics and Plant Breeding, B.A.College of Agriculture, Anand Agricultural University, Anand. (Authentification no: BACA/GPB/1357/15). Collected fruits were washed, dried and grounded to obtain fine powder. The air dried powdered drug was extracted with water and alcohol mixture (50:50) using Soxhlet apparatus. Extract of the fruit was evaporated to dryness under pressure to get solid residue. The residue was stored at 0-4 ºC for subsequent experiments.

Male wistar rats weighing 180-250gm were procured from Zydus Research Centre, Ahmedabad. The animals were housed under standard conditions, maintained on a 12 hr. light/dark cycle and had free access to food and water. The animals were acclimatized to the laboratory environment 1hr. before the experiments. All experiments were conducted during the light period (0.8.00-16.00 hrs.)The protocol (No: CPCSEA/IAEC/ARCP/2014-15/02) of the study was approved by the Institutional Animal Ethical Committee (IAEC) and experiments were conducted according to guidelines of CPCSEA (Committee for the Purpose of Control and Supervision of Experiments on Animals).

Myocardial infarction was induced by injecting ISO dissolved in 2ml of saline, at a dose of 85mg/kg/day i.p on two consecutive days.

Measurement of SOD activity in myocardium involves the inhibition of autoxidation of adrenaline to adrenochrome by SOD during oxidative stress. The test is carried out by treating tissue homogenate with carbonate buffer, EDTA and epinephrine. The optical density of formed adrenochrome is read at 480nm. The enzyme activity is expressed in terms of U/min/mg of protein.13 The activity of catalase was determined by the method of Sinha (1971). Catalaseis an important cellular antioxidant enzyme which converts H2O2 to H2O and ½ O2. To the reaction mixture containing phosphate buffer, pH 7.0, tissue homogenate-supernatant and H2O2, dichromate acetic acid was added which reacts with H2O2 to form perchromic acid which was assayed colorimetrically at 570 nm.

The activity was expressed as µmoles H2O2 decomposed/min/mg protein.14 GSH in heart homogenate was estimated by method of Ellman (1959) the concentration of GSH, was determined using dithiobisnitrobenzoate (DTNB) solution. Homogenate was reacted with 5% trichloro acetic acid (TCA) to precipitate the protein. After centrifugation, DTNB was added to the supernatant of homogenate and incubated for an hour. The yellow color that developed was measured at λ 412 nm. The concentration of GSH in heart tissue was expressed as nmol GSH/gm.15

In the assay of lipid-peroxidation a compound MDA is formed which react with thiobarbituric acid to give a colored complex, which gives a maximum absorption at 532nm. So lipid peroxidation was measured in terms of level of MDA. The results were expressed as TBA reactive substances nmol/g.16

Heart tissue obtained from all experimental groups was washed immediately with saline and then fixed in 2% formalin solution. After fixation the heart tissue was embedded in paraffin, serial sections were cut, each section was stained with hematoxylin and eosin (H&E) and was examined under high power lens and photomicrographs were taken.

Scientific data were analyzed statistically using the Statistical Package for Social Science (SPSS) software package version 22.00 by One Way ANOVA followed by Tuckey’s test.  Results were expressed as Mean ± SEM for six rats in each group. p value <0.05 was considered as statistically significant.

Confirmation of induction of Myocardial infarction:

Fig.1 shows the results of presence or absence of Cardiac Troponin-T (cTn-T) in serum obtained from rats of various groups. As is evident from the figure, serum of normal control rats shows only control line while serum of isoproterenol treated group of rats shows both detection line and control line indicating presence of Cardiac Troponin-T above threshold value of 0.1ng/ml, which is suggestive of damage of myocardium leading to induction of MI.

Effect of ACFE on cardiac biomarkers:

CK-MB and LDH1 levels were significantly (p<0.05) increased in the serum of ISO treated group of rats as compared to normal control group. The prior administration of ACFE (200mg/kg and 400mg/kg) for 21days maintained the level of these cardiac marker enzymes near to normal in both treatment groups compared to ISO treated group and the difference was found to be statistically significant.

Effect of ACFE on the levels of oxidative stress biomarkers:

Effect of ACFE on histopathological changes: 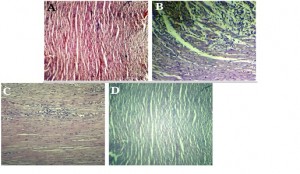 Thus β1-adrenoceptor antagonists and antioxidants may be indicated as the best therapy for stress induced heart disease.20 Many dietary antioxidants and some non-nutrient based antioxidants from plants such as sulphur containing compounds in garlic, phyto-estrogens in soy, green tea, anthocyanin in red berries, lycopene in tomatoes, red and white wines from grape seeds are increasingly being recognized as potential health promoters in reducing the risk of cardiovascular disease (CVD) and atherosclerosis.21

Plants containing flavonoids have been reported to possess strong antioxidant properties.22 Averrhoa carambola is fully packed with vital nutrients and natural antioxidants like L-ascorbic acid, (-) epicatechin, Gallic acidand flavonoids which are reported to possess antioxidant activity.23 Serum CK, CK-MB, cTn-T and LDH are well known markers of myocardial infarction. When myocardial cells are damaged or destroyed due to deficient oxygen supply or glucose, the cardiac membrane becomes permeable or may rupture which results in leakage of enzymes. These enzymes enter into the blood stream thus increasing their concentration in the serum.24 Elevated cardiac troponin-T level predicts the risk of both cardiac death and subsequent infarction. Our results show significant elevation in the levels of diagnostic marker enzymes cTn-T in serum of ISO-treated rats, suggesting that isoproterenol has caused cardiac damage progressing to infarction. Our results are consistent with previous reports of elevation of cTn-T in isoproterenol treated rats.25

Treatment with ISO increased levels of CK-MB & LDH1 which were found to be reduced by pretreatment with ACFE-200 and 400mg/kg due to free radical scavenging property of antioxidative phytochemicals such as flavonoids and L-ascorbic acid present in it. Pro oxidant ROS like superoxide radicals generated at the site of damage in MI modulates SOD and catalase which are the first line cellular defense against oxidative injury resulting in the lowered activities of these enzymes and accumulation of superoxide anion, which damages the myocardium.26 These enzymes are involved in direct elimination of ROS by decomposing O2 and H2O2 before their interaction to form the more reactive hydroxyl radical (OH•).27

GSH has a direct antioxidant function by reacting with superoxide radicals, peroxy radicals and singlet oxygen followed by the formation of oxidized GSH.28 In present study treatment with ISO decreased level of GSH which was significantly elevated on treatment with ACFE indicating protection against isoproterenol induced myocardial injury. We observed significant decrease in activity of SOD and Catalase in isoproterenol treated group which were restored to near normal levels by administration of ACFE.

Histopathological findings of infarcted heart treated with ACFE showed a near normal morphology of cardiac muscles with absence of necrosis as compared to isoproterenol treated heart.

ACKNOWLEDGEMENT: We really thankful to Dr. D. J. Ghodasara, Professor Anand Agriculture University, Anand. For his contribution in histopathological aspect of the study.