ABSTRACT: The study was aimed to justify the traditional claim of fruits of Sesbania grandiflora (Leguminosae) as a medhya rasayana. Dementia was induced with chronic administration of a high fat diet for 90 days. Petroleum ether, benzene, chloroform, acetone, ethanol extracts of fruits of Sesbania grandiflora were evaluated for cognition-enhancing activity in high-fat diet-induced dementia in rats using an elevated plus maze and biochemical estimation  of brain AchE and cholesterol level. Piracetam (200 mg/kg p.o.) as standard drug. Transfer latency (TL) was observed in HFD induced rats using EPM which showed significant increase (p<0.01) in TL as compared to the normal control group. The high-fat diet-induced rats showed a significant increase (p<0.01) in AchE and cholesterol levels as compared to normal control. Whereas petroleum ether extract treated rats showed a significant increase (p<0.01) in AchE and cholesterol level. Treatment with benzene, chloroform, acetone ethanol extract of Sesbania grandiflora fruits inhibited the rise in brain acetylcholinesterase and cholesterol level. These observations established traditional claim, and thus Sesbania grandiflora could be memory enhancer might be due to the presence of flavonoids.

INTRODUCTION: Dementia is characterized by a gradually decline in memory and loss of cognitive function 1. Dementia associated with Alzheimer's disease is most common cause of memory impairment and cognitive dysfunction in the elderly population 2. Alzheimer’s disease (AD) is the gradual degeneration of neurons in specific brain areas such as frontal and temporal region 3. Acetylcholine is considered as the most important neurotransmitter present in the CNS and peripheral autonomic and somatic nervous systems 4.

Due to the resulting side effect of these agents, they have limited their use 8. Currently, there is no satisfactory therapeutic regimen available for the management of cognitive dysfunction. Ayurveda is the ancient science of medicine with the prime objective is to maintain good health and to cure disease 9. The eight specialized branches of Ayurveda is Rasayana (rejuvenator). Rasayana is defined as the means of achieving the finest quality of Rasadidhatu (body tissues) where it increases life span, improves Medha (intelligence), cures disease, stabilizes youthfulness, improves lustre, complexion, voice and makes body and senses strong and healthy etc. 10 Medhya rasayana is special class of Rasayana which acts on medha (intellect) to promote the cognitive function of the brain 11. Medhya Rasayana (memory promoting rejuvenation therapy) herbs such as Mandukaparni (Centella asiatica), Yashtimadhu (Glycyrrhiza glabra Linn), Guduchi (Tinospora cardifolia Wild) Sankhapushpi (Convolvulus pleuricaulis). Sesbania grandiflora (Leguminosae) is a soft wooded tall, slender tree that reaches 6.9 m in height, 20-25 cm width. Leaves 5-30 cm long; leaflets 16-30 pairs, linear-oblong. Pods 50 cm long or 15-20 pale colored seeds. 10 cm long with showy, fleshy, white, crimson, red or pink petals. It is commonly known as Hadaga. It is usually cultivated in India, Australia, Indonesia, Malaysia, and Myanmar 12, 13.

Extraction Process: The fruits of Sesbania grandiflora were dried in the shade for 15 days. The shed dried powder of fruits of Sesbania grandiflora was reduced to a coarse powder and sieved. The powder was subjected to successive hot continuous extraction (soxhlet apparatus) with pet ether (60-80), benzene, chloroform, acetone, ethanol to about 40cycles per batch for 10 batches. The extraction was continued until the solvent in the thimble become clear then a few drops were collected in a test tube during the completion of the cycle (during siphoning) chemical test of that solvent was performed. Each time before extracting with the next solvent, the powdered material was dried at room temperature.

Laboratory Animals: The experiments were carried out using Sprague dawle rats weighing (125-150 gm) were used in the present study. The animal had free access to food and water, and they were housed in a natural 12 h light-dark cycle. The animals were acclimatized for at least 5 days to the laboratory conditions before behavioral experi-ment. The experimental protocol was presented in the IAEC meeting held on 22 January 2018. The approval for the use of lab animals (Reference no. IAEC/ABCO/09/2017-18) was taken from the Institutional Animal Ethics Committee (IAEC), Appasaheb Birnale College of Pharmacy, Sangali. All the experiments were conducted according to ethical principles and guidelines provided by the Committee for the purpose of Control and Supervision of Experiments on Animals (CPCSEA).

Acute Oral Toxicity Study: The acute oral toxicity study of the extract was carried out as per the guidelines set by Organization for Economic Cooperation and Development (OECD), received draft guidelines, received from Committee for the purpose of Control and Supervision of Experiments on Animals (CPCSEA), Ministry of Social Justice and Empowerment, Government of India.

Elevated Plus Maze: The elevated plus maze served as the exteroceptive behavioral model (wherein the stimulus existed outside the body) to evaluate learning and memory in mice. The apparatus consisted of two open arms (16 cm × 5 cm) and two covered arms (16 cm × 5 cm × 12 cm). The arms extended from a central platform (5 cm × 5 cm), and maze was elevated to a height of 25 cm from the floor. On the first day, each mouse was placed at the end of an open arm, facing away from the central platform. Transfer latency (TL) was taken as the time taken by the mouse to move into any one of the covered arms with all its four legs. TL was recorded on the first day. If the animal did not enter into one of the covered arms within 90 sec it was gently pushed into one of the two covered arms, and the TL was assigned as 90 sec.

The mouse was allowed to explore the maze for 10 sec and then returned to its home cage. Retention of this learned task (memory) was examined 24 h after the first-day trial (i.e. 9th day, 24 h after last dose). A significant reduction in TL value of retention indicated improvement in memory 17. The TL was expressed as inflection ratio using formula given 18.

Preparation of Enzyme Homogenate: Animals from each group were decapitated, and the brain was rapidly removed over ice and weighed.

After the addition of the substrate acetylthiocholine iodide (0.075 M), the absorbance was measured every 1 min for 3 min at 412 nm using spectro-photometer 20. The rate of moles of substrate hydrolyzed per gram of tissue was later calculated as per the following equation:

Where, △A = Change in absorbance per minute, C0 = Original concentration of the tissue, R = Rate in moles substrate hydrolyzed per minute per gram of tissue.

Statistical Analysis: The result of the study were expressed as ± S.E.M. Data was analyzed  by using one way analysis of variance test (ANOVA) followed by Dunnett’s test for multiply comparisons. Statistical significance was set at p<0.05.

Phytochemical Screening: Preliminary phyto-chemical screening of all the extracts of Sesbania grandiflora has shown the presence of flavonoids, steroids, saponin, proteins, glycosides, tannins, and polyphenol 21.

Elevated Plus Maze:  Transfer latency (TL) was defined as the time (in seconds) taken by animals to move from the open arm into one of the closed arm with all its four legs. 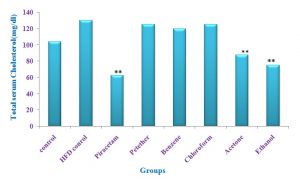 DISCUSSION: Alzheimer’s disease (AD) is progressive neurodegenerative disease characterized by cognitive and non-cognitive dysfunction such as difficulty in thinking, memory loss, disturbance in behavior and speech, and makes every task of day to day life complex 22. First day Transfer latency indicated the learning ability of animals whereas Transfer latency of the second day indicated memory. Piracetam was first representative class of nootropic agents have been shown to improve impaired memory in children and geriatric.

Piracetam (200 mg/kg p.o.) was administered for 8 days to improve learning and memory significantly and reversed memory impairment effect due to chronic administration of a high-fat diet. The neuronal cell membrane of the brain composed of cholesterol, which performs several biological functions. Cholesterol plays a crucial role in the deposition and clearance of amyloidal peptide. Apolipoprotein-E is cholesterol transporting protein in the brain responsible for the deposition of amyloid plaque. Nowadays, an ample number of scientific reports showing a strong link between high cholesterol levels and high incidence of Alzheimer’s disease. Therefore, a new therapeutic strategy aimed at reducing blood cholesterol levels is gathering momentum for the management of Alzheimer's disease. The main histological features of AD include extracellular protein deposits termed as β-amyloid (Aβ) plaques, Aβ deposits in blood vessels, and intraneuronal neurofibrillary tangles. A marked increase in cholesterol levels increases Aβ in cellular and most animal models of AD and drugs that inhibit cholesterol synthesis lower Aβ in these models. Clinical studies suggested that the net brain cholesterol concentration is regulated by serum cholesterol levels and that there is a crosstalk between the CNS and peripheral cholesterol pools. Therefore, it is plausible that peripheral cholesterol levels modulate CNS cholesterol levels and vice versa 23. In the present study, treatment with benzene, chloroform, acetone, and ethanol extract of Sesbania grandiflora fruits inhibited the rise in brain acetylcholinesterase and cholesterol level. Acetylcholine is neurotransmitter synthesized from cholinergic neurons of the brain, which regulate the transmission of signals and delivery of messages in the brain 24. AchE is the presynaptic (cholinergic) and postsynaptic (cholinoceptive) component of cholinergic pathway and responsible for termination of neurotransmission and plays important role in the regulation of cognitive function 25. Selective loss of cholinergic neurons and decline in cholinacetyltransferase activity was hallmark of senile dementia of Alzheimer’s type.

Benzene, chloroform, ethanol, and acetone extracts of Sesbania grandiflora fruit have Presence of higher level of flavonoids may be responsible for the cognition-enhancing activity. Further investigations using more experimental paradigms are required for confirmation of Sesbania grandiflora fruit for cognition-enhancing potential in the treatment of various cognitive disorders.

CONFLICTS OF INTEREST: There are no conflicts of interest among all the authors with the publication of the manuscript.