ABSTRACT: Diabetes Mellitus increases the risk of both microvascular and macrovascular complications, out of which CVD affects approximately 32.2% of people with Type 2 Diabetes Mellitus globally. It is predicted that for every 1% increase in HbA1c is associated with a 30% increase in all-cause mortality and a 40% increase in CVD mortality in T2DM patients. This study aims to evaluate the correlation of HbA1c% with various hematological indices and to elucidate the possible changes in some hematological and lipid parameters in people with poor glucoregulation. A total of 76 patients of both gender with type 2 DM were included in the study after fulfilling the exclusion and inclusion criteria. Data from complete blood picture reports of the subjects were collected and documented. The collected data includes the values of HbA1c, some elements of complete blood picture, and lipid profile. The subjects were divided into two categories with HbA1c% ≤ 7 and HbA1c% > 7. All blood parameters under study except lymphocytes showed a significant mean increase in subjects with HbA1c% > 7. HbA1c showed a statistically significant positive correlation with MCHC (r=0.310), RDW(r=0.584), WBC(r=0.453), MPV(r=0.709), TC(r=0.471), TG(r=0.426) and VLDL(r=0.437) at p-value < 0.05. Neutrophils and MCH showed no significant positive correlation, and lymphocytes count was negatively correlated with HbA1c. Our study concluded that HbA1c% was positively correlated with MCHC, RDW, MPV, WBC, TC, TG, and VLDL. Hyperlipidemia was also found to be persistent among patients with poor glycemic status, which is associated with a higher risk of cardiovascular-related mortality and morbidity.

INTRODUCTION: Diabetes Mellitus is a non-communicable chronic metabolic disorder in which blood sugar (glucose) levels are abnormally high (hyperglycemia) as the result of a defect in insulin secretion, insulin resistance, or both 1.

According to IDF-9th edition, it is estimated that 463 million adults of age 20-79 years are currently living with Diabetes Mellitus, which is about 9.3% of the world population in this age group. The total number is predicted to rise to 578.4 million (10.2%) by 2030 and to 7000.2 million (10.9%) by 2045. The total number of deaths resulting from diabetes and its complications in 2019 is estimated to be 4.2 million. Diabetes Mellitus increases the risk of both microvascular and macrovascular complications, out of which CVD affects approximately 32.2% of people with Type 2 Diabetes Mellitus globally 3.

HbA1c is a clinical standard measure of blood sugar management. HbA1c is the best available biochemical parameter that provides a long-term trend of how high blood glucose levels have been for the period of the last 6-8 weeks. It is closely associated with the risk of developing complications and hence it is used as an evidence-based marker to assess the chances of developing diabetic complications 4. It is predicted that for every 1% increase in HbA1c is associated with a 30% increase in all-cause mortality and a 40% increase in CVD mortality in T2DM patients 5.

Many studies revealed that hematological indices and lipid parameters role in assessing the risk of vascular complications. Red cell distribution width (RDW) is a recently described as a novel inflammatory biomarker to predict cardiovascular mortality, particularly in people with poor glycemic control and also in renal diseases 6. RDW is a measure of anisocytosis and there are no possible well-established pathological mechanisms to explain the relationship between cardiovascular outcomes and RDW, but both oxidative stress and inflammation are believed to play a prominent role 7.

WBC, a marker of inflammation, predicts a wor-sening of insulin action, insulin secretory function 8, and the development of micro and macrovascular complications 9. Activation of pro-inflammatory signalling pathways that promote the differentiation and maturation of WBCs are involved in the pathogenesis of insulin resistance, via various cytokines and signalling pathways 10. Elevated WBC is also associated with atherosclerotic changes which lead to cardiovascular complications 11.

MPV is used to estimate the platelet function and aggregation potential, which plays a key role in thrombogenesis and atherosclerosis 12 and might be a useful prognostic marker of cardiovascular complications in diabetic patients 13, 14. It was found that diabetic patients have large platelets that produce more β-thromboglobulin, serotonin, and produce more thromboxane than normal people 13 and contain less antioxidants 15. Hyperglycemia and hyperinsulinemia might regulate the production of interleukin-6 and thrombopoietin that leads to an increase in platelet size 16.

Hyperlipidemia is more prevalent among Type 2 diabetes patients and a modifiable risk factor for cardiac problems. Insulin resistance or deficiency affects the key enzymes and pathways in lipid metabolism leading to lipid abnormalities among type 2 diabetes patients 17. Inflammation caused by glycated hemoglobin is responsible for the formation of atherosclerotic plaque (atheroma) 18. In insulin-resistant conditions, hepatic triglycerides synthesis increases in diabetic patients due to the antilipolytic effect of insulin and also increase in free fatty acids 19.

Criteria for Selection of Patients:

Inclusion Criteria: (1) Both males and females with type 2 DM of age above 30 years, who agreed to participate in the study, (2) Patients with BMI ≤ 30, (3) Patients without any other systemic medical condition prior to DM onset, (4) Subjects who were on regular medication.

Exclusion Criteria:  (1) Subjects on Anti-platelet drugs such as aspirin and clopidogrel and anti-hyperlipidemic drugs such as statins and fibrates, (2) subjects with cardiovascular problems, (3) thyroid problems, (4) newly diagnosed T2DM patients (5) type 1 diabetes, (6) renal and hepatic impairment and (7) subjects with haematological diseases, (8) impaired movement and communication disability, (9) acute infections, malignancy were excluded from the study.

Questionnaire: The patient-specific data was collected by using an interview-guided self-administered questionnaire. We approached the patients by oral questioning regarding detailed Socio-demographic data, Behavioural factors, Medical-related factors, and management of clinical factors.

Statistical Analysis: Statistical analysis and data documented were analyzed by using Microsoft excel 2013. Pearson’s correlation test was performed to examine various correlations. Independent sample Student’s t-test (two-tailed) was used to compare the means of different parameters. All p values less than 0.05 were considered to be statistically significant. All values are expressed as mean ± standard deviation (SD) or standard error of the mean.

TABLE 1: BASELINE CHARACTERISTICS OF THE POPULATION UNDER STUDY

P-value is considered significant at < 0.05 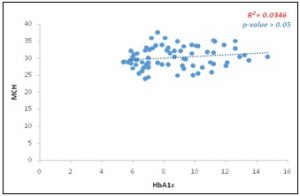 FIG. 1: SCATTER PLOT GRAPH OF MCH AND HbA1c LEVELS IN THE TOTAL SAMPLE 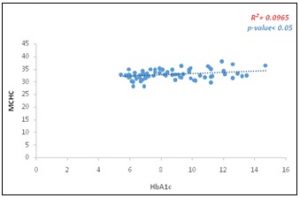 FIG. 2: SCATTER PLOT GRAPH OF MCHC AND HbA1c LEVELS IN THE TOTAL SAMPLE 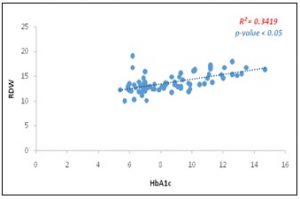 FIG. 3: SCATTER PLOT GRAPH OF RDW AND HbA1c LEVELS IN THE TOTAL SAMPLE 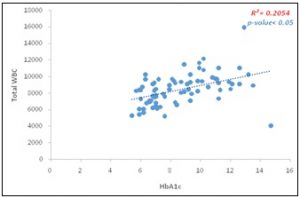 FIG. 4: SCATTER PLOT GRAPH OF WBC AND HbA1c LEVELS IN THE TOTAL SAMPLE 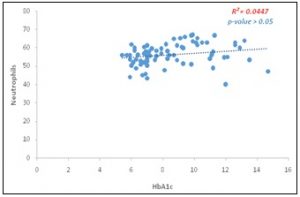 FIG. 5: SCATTER PLOT GRAPH OF NEUTROPHILS AND HbA1c LEVELS IN THE TOTAL SAMPLE 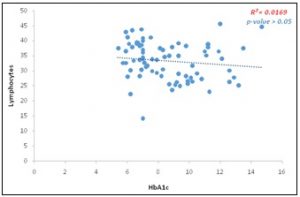 FIG. 6: SCATTER PLOT GRAPH OF LYMPHOCYTES AND HbA1c LEVELS IN THE TOTAL SAMPLE

FIG. 7: SCATTER PLOT GRAPH OF MPV AND HbA1c LEVELS IN THE TOTAL SAMPLE 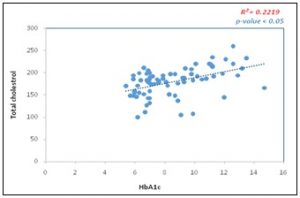 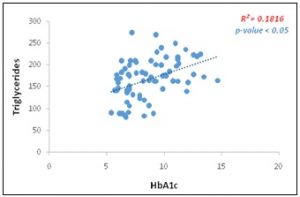 FIG. 9: SCATTER PLOT GRAPH OF TRIGLYCERIDES AND HbA1c LEVELS IN THE TOTAL SAMPLE 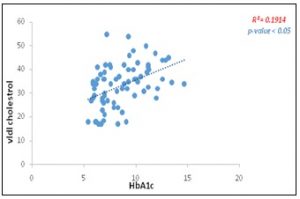 FIG. 10: SCATTER PLOT GRAPH OF VLDL AND HbA1c LEVELS IN THE TOTAL SAMPLE

DISCUSSION: Diabetes is associated with non-enzymatic glucosylation of hemoglobin 20. As the hyperglycemia persists, there are changes in the composition and morphology of erythrocytes, which affects the flow properties by altering erythrocyte deformability and aggregation 21. The results of our study revealed that among the RBC indices MCH, MCHC and RDW showed a significant increase in mean (at p-value < 0.005) within the normal range among the subjects with HbA1c%>7. However MCH showed no correlation (r=0.185; p-value=0.107) with HbA1c%. MCHC, and RDW showed a significant positive correlation (r=0.310, r= 584; at p-value 0.000) with HbA1c%. RDW reflects the variability in red cell size, and vitamin B12 deficiency might also be associated with long-term metformin 22 use which is important for the normal maturation of the red blood cells and serves as a prognostic inflammatory marker for future complications.

Type 2 DM is a prothrombotic state due to increased platelet activity 14. Platelet activity may be elevated by hyperglycemia and hyperlipidemia, insulin resistance, an inflammatory and oxidant state, and also with increased expression of glycoprotein receptors and growth factors 23. Our study results were similar to Kodiatte, Thomas Alex et al. 23 and Zuberi, B F et al. 24 We found that MPV significantly increased mean within normal in subjects with HbA1c > 7 (at p-value 0.000). MPV showed a significant positive correlation with HbA1c (r= 0.70 at p-value 0.00).A study by Aktas et al., 2014 25 suggests that homocysteine, a determinant of atherosclerosis and a maker for inflammation 26 may be elevated in vitamin B12 deficiency. As MPV is also associated with inflammation, both homocysteine and MPV might be interrelated 27.

In the poorly controlled diabetes subjects, WBC, neutrophils showed a comparatively increased mean value in subjects with HbA1c% >7 than subjects with good glycemic control (9031.10 ± 1942 vs. 7467.17±1276.51) at p-value < 0.05.WBC showed a significant positive correlation (r=0.453 at p-value 0.00), whereas neutrophils did not show a significant positive correlation with HbA1c%. Lymphocytes were negatively correlated with HbA1c% and were low in the subjects with HbA1c %<7. Increased WBC is usually associated with a decrease in insulin sensitivity. A meta-analysis of prospective studies has reported that people in the top third of baseline total leucocyte counts have about a 40% (95% CI: 30–50%) increased risk of coronary heart disease (CHD) over the subsequent decade compared with those in the bottom third of the population 28, 29.

In our study, we evaluated the relationship between total cholesterol, triglycerides, and VLDL with glycated hemoglobin. The lipid parameters TC, TG, VLDL showed an increment among the poorly controlled diabetes patients and showed a significant positive correlation (r = 0.471; 0.426; 0.437; at p-value 0.00) with HbA1c. Khan et al., 200730, Meenu et al., 201331 studies showed similar results of correlation between TC, TG, VLDL, and HbA1c. Elevated triglycerides play a major role in increasing atherosclerotic cardio-vascular risk 32. All the lipid parameters under our study showed a significant increase and tended to the high borderline, which indicates increased cardiovascular risk among type 2 diabetes patients.

CONCLUSION: Our study demonstrated that HbA1c% was positively correlated with MCHC, RDW, MPV, WBC, TC, TG, and VLDL. Hyperlipidemia was also found to be persistent among patients with poor glycemic status, which is associated with a higher risk of cardiovascular-related mortality and morbidity. As a complete blood picture is simple and cost-effective, screening of hematological parameters and lipid parameters also should be done along with glycated hemoglobin to presume the risk of long-term vascular complications and to increase the quality of life in T2DM patients.

ACKNOWLEDGEMENT: We consider it as a great honour to express our deep sense of gratitude to our principal Dr. M. Eswar Gupta M. Pharm, Ph.D. for supporting us to complete the academic project successfully with ease. We owe a great deal to physicians, nurses and all, including patients without whose co-operation this dissertation would not have been possible.

LIMITATIONS: A small sample size and limited resources were the limitations of our study. Further studies should be conducted with a large sample size.