ABSTRACT: Anemia is defined as a decreased hemoglobin level or circulating red blood cells, and it is the most common hematological disorder during pregnancy. The study was aimed to review the prevalence of anemia in pregnant and lactating women and to find out the correlation between educational status and prevalence of anemia if any. A Concurrent Observational study was carried out Using a Case Sheet of the In-patient and Out-Patient of Parul Sevasharam Hospital during a period of six months. Among 115 women, the majority of anemic women were in the age of 21-25 years. The present study showed that the prevalence of moderate anemia (42.60%) among pregnant and lactating women was high. The lower socio economic status (64.35%), low level of education were associated for high prevalence of anemia, and the majority of antenatal women were primigravida (37.39%) and were in the third trimester (77.39%) of pregnancy. The majority of women took iron supplements (42.31%) during pregnancy; all the hematinics (41.53%) were prescribed in oral route. Study suggests an association of socioeconomic status and education in prevalence of anemia. Majorly women with primigravida and in the third trimester were found to be anemic. The iron supplement was prescribed highest among all hematinics. Proper education and inclusion of foods rich in hematinics can reduce the risk of anemia in pregnant women. Prescription by generic name was more compare to brand name and nearly all drugs were prescribed from NLEM. The majority of women took iron supplements during pregnancy.

INTRODUCTION: According to WHO, haemo-globin level below 11 gm/dl in the first trimester, below 10.5 gm/dl in the second and third trimester and below 10 gm/dl in the postpartum period would be defined as anemia 1, 2. Anemia during pregnancy is more risk for premature birth and increases by three-fold the risk for low birth weight and maternal mortality 3.

Many studies found that lower socioeconomic status leads to a higher prevalence of anemia among pregnant women 4. The severity of anemia was also found to be inversely related to educational status. The women who are poorly educated might suffer from the deleterious effect of poor nutrition 4. Vit B12 anemia caused by a lack of intrinsic factor resulting in a lack of absorption of vitamin B12 is rare during pregnancy as it usually causes infertility 5.

Source of Data: The data about the patients was collected by visiting the in-patient and out-patient department in a tertiary care teaching hospital in a specially designed data collection form. 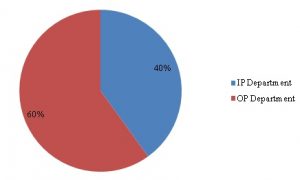 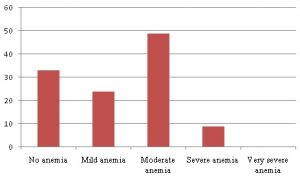 FIG. 2: PREVALENCE BASED ON SEVERITY OF ANEMIA 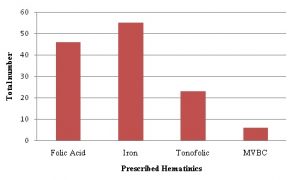 DISCUSSION: The findings of this study showed that the majority (44%) of the anemic pregnant women were in the age group of 21-25 years. The average maternal age obtains in this study was similar to the study by Binu K. M. et al., at Raichur 6. Greater than half of the women visited antenatal OPD (60%) than IPD (40%) in this study. The present study documented that the proportion of women experiencing anemia increased with the increase in a trimester. In this study, women in the 3rd trimester (77.39%) showed a higher prevalence.

This is similar to the study conducted by Basavaraj Bhandare et al. at Raja Rajeswari Medical College & Hospital 4 and the study by Shailesh Yadav et al. 70. In this study, patient's obstetric history showed that (37.39%) women were primigravida.

Similar observation was made in the study conducted by Anup Gopinath et al., 51 and Befikadua Zikarias et al. 8. This study observed that majority of pregnant women were literate. This was an encouraging finding, as it can make them understand the difficulty of the therapy and the benefits gained, which was similar to study done by S.R. Gawde et al., 9 study by Darshan Bhagwan et al. 10

According to B.G. Prasad’s Socioeconomic status classification, women (64.35%) belonged to Class-4 [Lower middle class] were higher in this study, which was different from the study by Anup Gopinath et al. 11 In this study, 115 women were observed, the majority had (42.60%) moderate anemia with the mean Hb level 7-10 gm/dl. The results of the study are similar to Sathya P. et al., conducted in an urban area in Coimbatore district 12 and a study by Shridevi at Maheshwara medical college and hospital, Telangana 13.

Hematinics constituted over 41.53% of all the medicines and consistently remaining the most frequently prescribed.

The iron supplement was prescribed highest among all hematinics. All the drugs were prescribed from NLEM. Proper education and inclusion of foods rich in hematinics can reduce the risk of anemia in pregnant and lactating women to avoid fatal maternal outcomes.

Limitation of the Study: The duration of the study is only for a period of six months. If the study is extended for the longer time period, it can permit to check the association between anemia and foetal development or foetal outcome with the geographical association as a multi centric study.

ACKNOWLEDGEMENT: We thank all the subjects who participated in this study and the staff of the hospital for their cooperation. We also thank one and all who have a direct or indirect role in the completion of this study.

CONFLICTS OF INTEREST: All authors have no conflicts of interest to declare concerning this manuscript's publication.