INTRODUCTION: Date palm (Phoenix sylvestris) is one of the most important species of family Arecaceae. It is the most important foods of Arabs. The fruit of the plant have potential nutraceuticals and fibres to be used as a food supplements for nutrition. The fruit pulp is rich of minerals, acid, flavonoids, vitamins etc. Considering the food importance of the date fruit, numerous studies have been engaged on the characterization of it chemical composition particularly, polysaccharides identification of different parts of date 1, 2, 3. Various researchers characterized galactomannan- type polysaccharides, heteroxylan, and glucomannan. From pulp fruit, Haq and Gomes 4 have isolated a xylan and Ishurd et al., 5 have purified a linear glucan which shows mixing linkages.

More recently, Ishurd, Zgheel, Kermagi, Flefla, and Elmabruk 6 reported that this glucan was found to exhibit potent antitumor activity. Xylans represent the most abundant hemicellulose-type polysaccharides constituent in the plant kingdom. They are known to display several structural varieties in terrestrial plants and, even in different plant tissues within one plant. Previous studies have shown that plant xylans form a family of polysaccharides which consist of a backbone of b-(1, 4)-D-xylopyranose residues which can be substituted in C-2 and/or C-3 by short and flexible side chains. Besides the natural ingredients majority of the products also contains some pharmaceutically useful properties, one of them is mucoadhesive property.

Isolation of DPP: DPP was prepared following methods by Rao et al., 7, 8, 9 in three batches on a laboratory scale. To 50g of fruit pulp, 200ml of cold distilled water was added and slurry was prepared. The slurry was poured into 800ml of boiling distilled water. The solution was boiled for 20 minutes under stirring condition in a water bath and filtered it. The resulting thin clear solution was kept overnight so that most of the proteins and fibers settled out. The solution was then centrifuged. The supernatant was separated and poured into twice the volume of absolute alcohol by continuous stirring.  The precipitate was washed with absolute ethanol, diethyl ether and petroleum ether and then dried at 50-60° C under vacuum. The dried material was ground and sieved to obtain granules of different particle size range.

Physicochemical Parameters: Twenty disks were weighed individually and the average weight was determined. Percentage deviation was calculated and checked for weight variation. Thickness was measured using vernier callipers. The particle size range was determined by optical microscopy for preparation of disks.

Friability Study: A sample of ten formulations was selected. The sample was accurately weighed and placed in the drum of tablet friability apparatus (Roche friabilator). The samples underwent 25 rpm, for 4 min, and were then reweighed. This process was repeated for all formulations and the percentage friability was calculated using the following equation.

F, the percentage weight loss and W1 and W2 are the initial and final discs weights, respectively. If obviously cracked, cleaved, or broken discs are present in the disc sample after tumbling, the sample fails the test. A maximum weight loss of not more than 1% of the weight of the discs being tested is considered acceptable. This procedure was used to determine friability of formulations prepared by direct compression. All formulation showed friability values well below the 1% tolerance limit set by the British Pharmacopoeia for pharmaceutical tablets.

Tissue preparation: The porcine and goat tissue was obtained immediately post sacrifice from a local slaughterhouse and transported to the laboratory in isotonic phosphate buffer.  The mucosa was removed from the underlying muscular layer by cutting the loose connective fibers with a scalpel. Circular pieces were then punched out. The excised mucosa was immersed in isotonic saline at 37 °C for 1min and the epithelium was then peeled away from connective tissue. Samples were briefly dipped in kreb’s solution and maintained aeration throughout the experiments

Mucoadhesive study expressed in terms of mucoadhesive strength/Bioadhesive strength. Bioadhesive strength of disks was measured on modified physical balance using method described by Gupta et al., 10. The buccal mucosa (goat/porc) was used as a model mucosal membrane and a Krebs solution as a moistening fluid. The experiment was repeated for three times for each formulation. Two-arm balance method reported by Parodi 11 with minor modifications and he had also used to check and to validate the results of the modified tensiometry method and the correlation between the results obtained from these two techniques was established by Parodi.  Tissue were obtained from a local slaughterhouse and stored in Krebs buffer upon collection using ice box. The experiments were performed within hours of procurement of tissue. The tissue was fixed to the stainless steel piece with cynoacrylate adhesive and then placed in a beaker by facing the mucosal surface upper side. Krebs solution was added into the beaker up to the surface of mucosa for maintaining viability during the experiments and aeration maintained throughout the experiment by using aerator pump.

The prepared polymer disc was attached to the upper clamp of the apparatus and then the pan was raised slowly until contact between mucosa and disc was established. A preload of 50 g was placed on the clamp for 5 minutes (preload time) to establish adhesion bonding between disc and mucosa. The preload and preload time were kept constant for all the formulations. After completion of the preload time, preload was removed from the clamp, and the weight were placed onto another pan starting from 10 gm and the continuously increased the weight until disc was detached mucosa. The weight required to detach disc from mucosa was noted as MS, and these experiments were repeated with fresh mucosa in an identical manner (n = 3).

In vitro Mucoretentability of Mucoadhesive Disks: The in vitro retention time is one of the important physical parameter of mucoadhesive disks, measured in terms of duration of time in which the disc is detached or erodes from the mucus. The in vitro mucoretentability studies were conducted using a dissolution apparatus assembly. The adhesive disks was pressed over excised mucosa for 30 sec after previously being secured on lower tip of the basket of the dissolution apparatus containing around 750ml of phosphate buffer, at 370C and studies carried out at 150rpm and 370C to simulate saliva movement 12. The time necessary for complete erosion or detachment from the mucosa was recorded as an indication of the in vitro adhesion time.

Swelling Studies: The swelling properties and the erosion characteristics of disks were evaluated by determination of % of Hydration. Each disks was weighed (W1) and immersed in a phosphate buffer at pH 6.2 for 1 hr. After immersion, disks were wiped off by the excess of surface water by the use of filter paper and weighed (W2). This experiment was performed in triplicate. The % hydration was calculated by formula using % hydration =W2 - W1/W1×100 and swelling of different formulations shown after 2 hours. 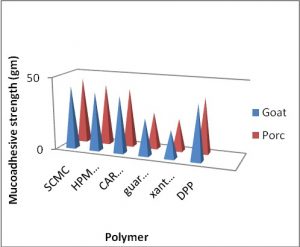 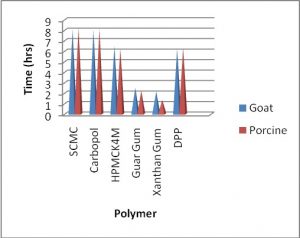 CONCLUSION: The aim of present study was to evaluate DPP as a Mucoadhesive polymer This biomaterial can serve as promising mucoadhesent for formulating the various transmucosal drug delivery systems.