Both urinary bladder contraction and salivation are mediated via cholinergic muscarinic receptors. After oral administration, Tolterodine is metabolized in the liver, resulting in the formation of the 5-hydroxymethyl derivative, a major pharmacologically active metabolite.

The 5-hydroxymethyl metabolite, which exhibits an antimuscarinic activity similar to that of Tolterodine, contributes significantly to the therapeutic effect. Both Tolterodine and the 5- hydroxymethyl metabolite exhibit a high specificity for muscarinic receptors, since either show negligible activity or affinity for other neurotransmitter receptors and other potential cellular targets, such as calcium channels 1-4. Tolterodine has a pronounced effect on bladder function. The main effects of Tolterodine are an increase in residual urine, reflecting an incomplete emptying of the bladder, and a decrease in detrusor pressure, consistent with an antimuscarinic action on the lower urinary tract 5.

Pharmaceutical solid dosage forms are using a functional coating to modify the release. Due to the disadvantages of coated single-unit dosage forms, such as dose dumping, less predictable gastrointestinal (GI) transit times and may potentially lodge in restrictions within the GI tract, which could lead to variable drug absorption and cause damage to the gastric mucosa if the drug is irritant, and hence coated multi-particulates are preferred. Coated multi-particulates can eventually be filled into capsules or compressed into tablets. Tablet dosage form is more desirable as unit production costs of considerably lower and machinery is more easily available. However, some challenges are there in the manufacturing of multi-unit pellet tablets, compression forces can result in damage to the functional coating, its function segregation pellets during compression. Hence, it is important to understand the factors affecting coat damage during compression 10-12 and segregation of pellets during the manufacturing of tablets.

There are many relevant articles and literature available on the preparation of pellets and coating technology. However, only a few research articles discuss the issue of compaction of pellets into tablets 13. A different techniques were used to prevent the damage of functional layers in past work, but remains an unmet need for drug delivery, some of the techniques are use of  cushioning excipients and/or compressible excipients, novel granulation techniques to protect the coating layer against fracture during compaction 14-19, improved by thermal exposure 20, Layering the top surface of beads with compressible excipients, such as microcrystalline cellulose (MCC), to modify the mechanical properties of the beads was successful in addressing this issue. This approach, however, requires a huge amount of the layering excipients, but still with mixed results 21.

In this article we given protective layering on the functional coated pellets with different natural (Guar gum and Xanthan gum) and synthetic polymers (Klucel, Polyethylene glycol 6000, Hypromellose 5 cps) and studied the effect of compression on damage of function layer, for this study tolterodine tartrate is selected as model drug, it is freely soluble in water.

Preparation Tolterodine Tartrate Drug Loaded Pellets: Tolterodine tartrate drug loaded pellets were prepared by using hydroxypropylmethyl cellulose as a binder in water and ethanol mixture. Dissolved the drug and hypromellose USP 2910 5 cps in ethanol and purified water co-solvent mixture and sprayed the drug solution on the core pellets by using a fluid bed processor with below process parameters.

After completion of the drug, loading reduced the fluidization air flow to a suitable level and dry the drug-loaded pellets at the product temperature of 45 ± 5 °C till to get LOD in less than 1% at 105 °C by auto mode using suitable moisture analyzer. Sifted the dried drug loaded pellets through mesh #25 and #30 meshes and collected the desired fraction of pellets #25/30 for control release coating. Tolterodine tartrate control release coating was done by using aqua coat ECD 30d used as control release polymer and hydroxyl propyl methyl cellulose used as pore former.

After completion of control release coating, drying the pellets at the product temperature of 50 ± 5 °C till to get LOD in less than 1% at 105 °C by auto mode using suitable moisture analyzer. Sifted the dried drug loaded pellets through mesh #25 and #30 meshes and collected the desired fraction of pellets #25/30 for control release coating.

Dissolved the Hydroxypropyl cellulose (Klucel LF) and Polyethylene glycol-6000 in Isopropyl Alcohol & Methylene Chloride and the prepared coating solution was sprayed on control release pellets by using the below parameters.

After completion of Protective Plasticizer coating, drying the pellets at the product temperature of 50 ± 5 °C till to get LOD in less than 1% at 105 °C by auto mode using suitable moisture analyzer. Sifted the dried drug loaded pellets through mesh #25 and #30 meshes and collected the desired fraction of pellets #20/30 for control release coating.

Characterization of the Protective Layer Coated Pellets and Precompression Blend:

Apparent Bulk Density: The bulk density of a powder is the ratio of the mass of an untapped powder sample and its volume including the contribution of the interparticulate void volume. Hence, the bulk density depends on both the density of powder particles and the spatial arrangement of particles in the powder bed. The bulk density is expressed in grams per ml (g/ml).

Hausner’s ratio: It related to the flow properties of powder samples and is measured by the ratio of tapped density to bulk density or ratio of bulk volume to tapped volume, it is related to interparticle friction. Limits of Hausner's ratio were presented in Table 7.

Angle of Repose: The angle of repose is a characteristic related to interparticle friction or resistance to movement between particles. It is the constant, three-dimensional angle (relative to horizontal base) assumed by a cone like a pile of material formed by any of several different methods. The limits of the angle of repose were presented in Table 8.

TABLE 8: LIMITS FOR THE ANGLE OF REPOSE (DEGREES)

Thickness (mm): The thickness of the tablets was determined using vernier calipers. Three tablets were picked up randomly and thickness was measured individually using the formula.

Hardness (kp): The hardness of the tablets was determined using hardness tester Make: Pharmatest; Type: PTB – 311E. It was expressed in kp. Three tablets were randomly picked and the average value of hardness was determined.

Friability test (%): Friability is the measure of tablet strength. It is expressed in Percentage (%), the friability of the tablet was determined by using Roche Friabilator. 10 tablets were initially weighed and transferred into the friabilator. The friabilator was operated for 100 revolutions (25 rpm/min), and then tablets were taken out and dedusted. The percentage weight loss was calculated by reweighing the tablets. The percentage friability was then calculated by

Friability Limits: less than 1% is acceptable.

Drug release measurements and comparisons: The in-vitro drug release profile for pellets as well as tablets was performed using USP type I dissolution apparatus. The conditions maintained were shown in Table 10. The samples were drawn at specified time intervals and the obtained samples were analyzed using HPLC method. The cumulative percentage release was calculated.

Scanning Electron Microscopy: The shape and surface morphology of the Tolterodine Tartrate over coated pellets and MUPS tablets were examined using a scanning electron microscope.

FTIR spectra of pure drugs of Tolterodine Tartrate was taken initially to check the basic functional groups present in them. The spectra of budesonide pure drugs MUPS tablet formulations and placebo of MUPS tablet were shown below. 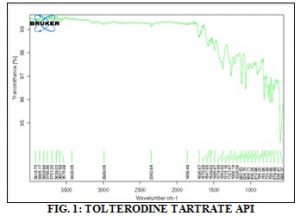 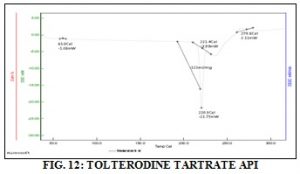 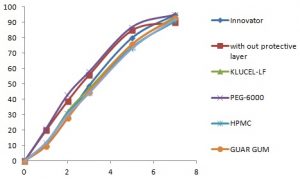 CONCLUSION: Tolterodine Tartrate controlled-release tablets were prepared successfully by using ethyl cellulose and hypromellose used as release-modifying excipients and low viscous natural or synthetic binders like klucel, polyethylene glycol 6000, hypromellose 5 cps, guar gum, and xanthan gum as protective layer coating agents. The flow properties of the pellets and the lubricated blend were evaluated and found to be satisfactory. The process parameters of Tolterodine Tartrate MUPS tablets were found to be well within limits.

Based on comparative dissolution profiles of MUPS tablets, controlled release pellets, and protective layer coating pellets it was concluded that by applying low viscous natural or synthetic binders like klucel, hypromellose 5 cps, guar gum and xanthan gum on functional coating gives good protection to functional coating layers from damage during compression. Hence, it is concluded that this approach is a very effective and potential strategy for manufacturing of MUPS tablets. Whereas, very low viscous polymers polyethylene glycol 6000 not able to protect the functional coating layer of pellets from damage during compression.

ACKNOWLEDGEMENT: The authors are grateful for support from the Hetero Labs Ltd, Hyderabad.

CONFLICT OF INTEREST: The authors have no conflicts of interest to declare that are directly relevant to the content of this manuscript.