ABSTRACT: Objective: To Evaluate hypoglycemic effect of Roflumilast in streptozotocin induced diabetic albino wistar rats. Materials and Methods: 18 albino rats were divided into 3 groups each group containing 6 animals, Group-1 (Diabetic Control): Distilled water 10ml, Group-2 (Standard): Glibenclamide 1.35mg, Group-3 (Test): Roflumilast 0.045mg/kg. A freshly prepared solution of Streptozotocin (45mg/kg body weight) in 0.1ml citrate buffer, pH 4.5 was injected intraperitoneally in a volume of 1ml/kg body weight to overnight fasted rats. After 48 hours of STZ administration, rats with moderate diabetes were selected for the experiment. A base line Capillary Blood Glucose was checked just before giving streptozotocin. All along the course of study animals were provided with water and food ad libitum. On the 3rd day animals were evaluated for the diabetic status by checking CBG. Only diabetic rats were used for further study. They were given above drugs for a period of 28 days starting from 3rd day after giving streptozotocin. Blood glucose levels and body weight were measured on 0, 7th, 14th, 21st and 28th days. Result: Roflumilast has significant and sustained oral hypoglycemic activity in streptozotocin induced diabetic rats compared to diabetic control group, and also being statistically significant and comparable to the hypoglycemic effect of glibenclamide. Conclusion: These findings suggest that the hypoglycemic potential of the test compound Roflumilast is promising and found to be more significant than the diabetic control group.

Diabetes mellitus can further affect multiple organs of the body and cause complications like end stage renal disease, cardiovascular diseases, blindness and poor wound healing. Multiple pathophysiological alterations such as: inflammation and oxidative stress, insulin resistance, weight gain and alterations in metabolism of adipokines has led to the conclusion that Chronic obstructive pulmonary disease is a novel risk factor for new onset type 2 DM.

Disturbances in glucose metabolism are more common in COPD patients than in COPD free individuals and the risk increases with increasing age 2. Hence a drug which can be a target for both COPD and DM can help in reducing the mortality and morbidity in significant number of patients.

As of 2013, 382 million people have diabetes worldwide.  90% of the cases acconts for type 2 disease. This is equal to 8.3% of the adult population with equal rates in both women and men1. In 2014, the International Diabetes Federation (IDF) estimated that diabetes resulted in 4.9 million deaths. The World Health Organization (WHO) estimated that diabetes resulted in 1.5 million deaths in 2012, making it the 8th leading cause of death 3.

Preclinical studies have a significant impact on deciding therapeutic stratergy of diabetes. Recently PD4 inhibitors are considered to be a potent target for glucose lowering effect 4, 5, 6. The regulation of an incretin hormone, glucagon-like peptide-1 (GLP-1), with glucose-decreasing properties has been influenced by the cAMP-degrading phosphodiesterase 4 (PDE4) enzyme.

Glucose and other nutrients, hormones and neural factors are the main components which regulate insulin secretion from pancreatic β-cells. Cyclic AMP (cAMP) amplifies the exocytosis of insulin granules triggered by elevated cytoplasmic Ca2+ concentration [Ca2+]I. cAMP formation is assisted by Glucoincretin hormones and other Gs-coupled receptor agonists, but generation of the nucleotide is critical also for an optimal insulin secretory response to glucose. Nutrient and receptor stimuli influence the cAMP concentration in the pancreatic β-cells.  Factors like cell metabolism and [Ca2+]I influence the variations in cAMP production by adenylyl cyclase and cAMP degradation by phosphodiesterase, which are responsible for varying level of the second messenger in the cells. The cAMP signaling system contains crucial targets for pharmacological improvement of insulin secretion in type 2 diabetes 7.

Hence the study proposed   here is to evaluate blood glucose lowering effect of roflumilast, a PDE 4 inhibitor currently approved for the treatment of COPD. This  may  prove  to  be  beneficial  for  the  development of  novel  therapeutic  approaches  to treat DM and associated conditions either alone  and  in  combination  with  available antidiabetic  drugs.

MATERIALS AND METHODS: Albino wistar rats weighing around 150-200gms of either sex were randomly selected from the central animal house, JSSMC, Mysore. They had access to food (standard pellet diet, Hindustan Lever Ltd) and water. All experiments were carried out between 9 AM and 4 PM. The ethical clearance was obtained from the Institutional Animals Ethical Committee.

Albino rats were divided into 3 groups, each group containing 6 rats.

Procedure: A freshly prepared solution of STZ (45mg/kg body weight) in 0.1ml citrate buffer, pH 4.5 was injected intra peritoneally in a volume of 1ml/kg body weight to overnight fasted rats. After 48 hours of STZ administration, rats with moderate diabetes having glycosuria and hyperglycemia were selected for the experiment. A base line Capillary Blood Glucose (CBG) was checked just before giving streptozotocin. All along the course of study animals were provided with water and food adlibitum. On the 3rd day animals were evaluated for the diabetic status by checking CBG levels. Only the diabetic rats were used for further study. They were given the following drugs for a period of 28 days starting from 3rd day after giving streptozotocin. CBG levels was measured on 0, 7th, 14th, 21st, 28th days. The animals were divided into:

Statistical analysis: After collecting the data, the values in all the groups were analyzed by using one-way analysis of variance (ANOVA) statistical test. P values <0.05 were considered significant. 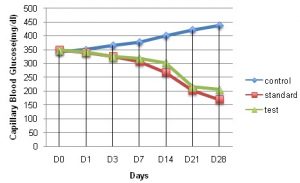 In diabetic control group, there was reduction of 20% body weight from day 1 to day 28, while in the standard; there was increase in body weight of upto10% whereas the test drug did not significantly affect the body weight as shown in Table 2 and Graph 2. This indicates that PDE4 inhibitors might be advantageous over current glucose-lowering drugs such as insulin, sulfonylureas orthiazolidinediones, for which body weight gain is often an adverse event. 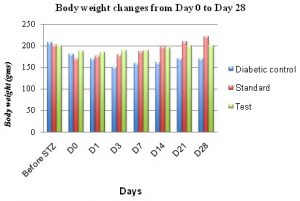 DISCUSSION: Diabetes mellitus is one of the chronic metabolic diseases .It has a significant impact on the health, quality of life and life expectancy of patients, as well as on the health care system. The effective and essential means to control raised blood glucose are exercise, diet and weight reduction which are considered to be the prime means of improving glucose homeostasis. Lifestyle management  though first line measure it is  insufficient alone or there is difficulty in patient compliance, rendering the option conventional drug therapies i.e. oral hypoglycemic agents like insulin secretogogues (glimepride, glipizide, repaglinide), biguanides (metformin), alpha glucosidase inhibitor(acarbose), thiazolidinediones, incretins, gliptins. Insulin is necessary in many patients either alone or with oral hypoglycemic agents as and when the condition arise. The presently available drugs are not completely fulfilling the criteria of management of diabetes mellitus. Some drugs may not be helpful to prevent or postpone complications of Diabetes mellitus and some have various adverse effects like hypoglycemia though they are good oral antidiabetic drugs.

Hence in this study an attempt is made to evaluate the effect of Roflumilast on glycemic level and its efficacy has been compared with that of standard oral hypoglycemic drug glibenclamide in streptozotocin induced diabetic rats which may give an insight for further studies.

Streptozotocin is a glucosamine- nitrosurea compound extracted from Streptomyces acromogens. 8 It is a broad spectrum antibiotic which is toxic to beta cells of the pancreas in mammals. STZ induces severe and irreversible hyperglycemia in experimental animals. 9 Glibenclamide is a standard antidiabetic drug and is used to compare the hypoglycemic property of test drugs in experimental animals. It stimulates insulin secretion from pancreatic β cell membrane. 8

The percentage reduction of blood glucose level was 52.9% as compared to Glibenclamide group 61.3% (at the end of the study), and has shown similar reduction in mean percent blood glucose level, and it was statistically significant (p<0.001) as compared to diabetic control group. The progressive hypoglycemic effect with respect to duration of administration and maximum effectiveness of the test drug was after the 1st week, but persistent hypoglycemic activity was continued upto 4 weeks.

The difference in the blood glucose readings for test group between D0 to D28 is 142.5 mg/dl and for the standard group the difference in D0 to D28 reading is 180 mg/dl when compared, clearly indicating that the test drug is equally potent under the experimental dosage. The above results indicate that Roflumilast has significant and sustained hypoglycemic activity persisting till 28th day.

Hypoglycemic activity of Roflumilast may probably be due to changes in the cytoplasmic cAMP concentration which play an important role in the adjustment of cellular processes initiated by hormones, neurotransmitters and nutrients. 10 In insulin-secreting pancreatic B-cells, cAMP has been found to potentiate Ca2+-dependent exocytosis 11, 12, 13. This is likely to be the mechanism by which the paracrine and systemic hormones glucagon, glucose-dependent insulinotropic polypeptide and glucagon-like peptide-1 14, 15 enhance glucose-stimulated insulin secretion. The action of these hormones involves activation of protein kinase a which occurs by increase in cytoplasmic cAMP concentration by inhibition of phosphodiesterases or stimulation of adenylcyclase. In accordance with this concept, the ability of cAMP to stimulate secretion can be prevented by inhibition of PKA.

Augmentation of release/secretion of glucagon-like peptide-1 (GLP-1) occurs due to increase in intracellular cyclic AMP. As cAMP is hydrolysed by phosphodiesterases (PDEs), PDE4 inhibitors can regulate GLP 1 release. cAMP has two effects: 1) cAMP activates Protein Kinase A (PKA), and 2) cAMP activates Epac1 and Epac2, two guanyl nucleotide exchange factors. 16 The catalytic subunits of PKA dissociate from the regulatory subunits and become an active kinase due to binding of cAMP to PKA. Closing ATP-sensitive potassium channels, closing voltage-gated potassium channels, releasing calcium from the endoplasmic reticulum and affecting insulin secretory granules are the mechanisms of insulin secretion by PKA.

Hence the PDE4 inhibitor may boost insulin secretion, acting directly on pancreatic islets and amplifying an insulin-secretory response to GLP-1, inhibitors of dipeptidyl peptidase IV or other triggers.

CONCLUSION: Thus the present study establishes that Roflumilast is effective in lowering blood glucose levels significantly in streptozotocin induced diabetic albino rats and comparable to the standard hypoglycemic drug, glibenclamide. The mechanisms such as enhanced intestinal GLP-1 secretion and amplification of the insulin-secretory response in the pancreas can be a leading novel and promising combination concepts for treating type 2diabetes.

Further studies need to be done in this respect along with long term safety studies and clinical trials to add this novel drug to the existing ones for overall management of type2 DM.