ABSTRACTCeiba pentandra (C. pentandra) has been traditionally used in the ayurveda system of medicine for the treatment of obesity and atherosclerosis. The present study was undertaken to evaluate anti-obesity and hypolipidaemic activity of the ethanolic leaf extract of C. pentandra in Cafeteria diet (CD) treatedWistar albino rats. Obesity was induced in Wistar albino rats by feeding CD daily for twelve weeks. Body weight was measured initially and then every week thereafter. Food and water intake was measured daily. On day 85th, the serum biochemical parameters were estimated and the animals were sacrificed with over dose of anesthetic ether. The liver and fat pads (perirenal, mesenteric and epididymis) were removed and weighed immediately. The intestinal activity of enzyme alkaline phosphatase (ALP) was determined. Administration of C. pentandra (125 mg/kg) prevented the increase in body weight in cafeteria diet treated animals. Administration of C. pentandra showed significant decrease in body weight gain in CD treated obese rats. The significant decrease in ALP level was observed in C. pentandra treated rats. Administration of C. pentandra showed significant decrease in the weight of liver and fat pads as compared to CD control and BMI (g/cm2) was lowered. Results of this study showed that C. pentandra has anti-obesity activity which may partly be mediated via inhibition of intestinal lipid absorption and thermogenesis. In conclusion, the results of this study showed that C. pentandra has therapeutic potential in the management of obesity.

INTRODUCTION: Obesity is a medical condition involving an excess accumulation of body fat. The prevalence of obesity has increased steadily over the past five decades not only in adults, but also among children and adolescents and had a significant impact on the quality adjusted life years 1.

The rapid increase in the incidence of obesity during the past several decades is a matter of great concern 2. The drugs used in the treatment of obesity acts either on central nervous system by suppressing appetite or inducing thermogenisis therefore leading to lipolysis e.g. Phentermine and Sibutramine, or acts on peripheral nervous system, which decreases fat absorption by preventing the breakdown of dietary fat in the gastrointestinal tract e.g. Orlistat 3.

Each of these promotes 5 to 10% loss of body weight and has their own limitations and side effects. An endocannibinoid receptor antagonist, Rimonabant was withdrawn from the market due to concerns about its safety, including risk of seizures and suicidal tendencies 4. However, these drugs do not cure obesity; weight rebounds when discontinued.

Thus, there is great demand for the search of new and safer antiobesity drugs 5. It is well documented that overeating and obesity can be produced in experimental animals like rats by offering them diets that are high in fat, sugar, or both. The most pronounced effects are obtained when the animals are offered an assortment of tasty fat and sugar-rich foods marketed for human consumption, which are referred to as the ‘‘supermarket’’ or ‘‘cafeteria’’ diet 6, 7.

Some herbs act on digestion, metabolism, or appetite to impact weight loss. Certain substances can increase thermogenesis (generation of heat), or metabolism, which may lead to weight loss. Herbal weight loss products are a great safe option for the people who want to lose weight naturally. Various herbal supplements have proved to be active against obesity like Allium sativum L., Citrus aurantium L., Cyperus Rotundus L., Glycyrrhiza glabra Linn, etc and its related diseases 8. Hence, there is an intense need to explore the anti obesity activity on different plant/ herbal extract 9, 10.

However, its antiobesity profile has not been scientifically documented. Hence, the objective of present study is to investigate the antiobesity and hypolipidaemic activity of ethanolic leaf extract of C. pentandra on MSG induced obese rats.

Experimental animals: The experimental protocol was approved by the Institutional Animal Ethics Committee.  Animals were obtained from the Animal house facility of Smt. Kashibai Navale College of Pharmacy, Pune. Wistar albino rats (50-70 g) of either sex were used in the study. They had free access to food and water ad libitum throughout the duration of the study. The rats were maintained at an ambient temperature between 28-30oC, humidity of 55±5%, and standard (natural) photoperiod of approximately 12 h of light (06:30-18:30 h) alternating with approximately 12 h of darkness (18:30-06:30 h).

Preparation of Ethanolic leaf extract of C. pentandra: The leaves of C. pentandra were collected from the regions surrounding Pune and were authentified by Botanical Survey of India, Pune, Maharashtra. Voucher specimen was submitted at the herbarium for future reference. The leaves were air dried, powered, and then extracted with 70% ethanol by using Soxhlet method. The extract was filtered with filter paper and then the solvent was evaporated at reduced pressure by using Rotavapor (Heidolph) apparatus to get viscous mass. The yield of extract obtained was 12.85%

Cafeteria diet induced Obesity: The animals were divided into three groups (n=6) and individually housed in cages. All the extracts were freshly prepared in distilled water and were administered in the form of suspension. Group I received normal standard feed, group II received cafeteria diet and group III received cafeteria diet  along with C. pentandra in dose of (125mg/kg, p.o) body weight, for a period of 12 weeks.  The cafeteria diet composed of (a) Boiled Potatoes (4 g) + (b) Biscuits (1 g) + (c) Groundnut oil (1 g) + (d) Chow (4 g) was given.

Acute Toxicity Studies: Evaluation of acute oral toxicity of C. pentandra was carried out according to the OECD guidelines for testing of chemicals – 425 (OECD, 2001).  The dose was found safe up to 5000 mg/kg as no behavioral changes and mortality was observed till 14 days.

Measurement of Food and Water intake: The food (g) and water (ml) intake of each group was determined daily by measuring the difference between the pre-weighed chows and the weight of the food that remained after 24 hours.

Measurement of intestinal Alkaline Phosphatase (ALP): On day 85th, the animals were killed by overdose of anesthetic ether after an overnight fast between 08:00 and 09:00 h. Small (5cm) segments of the proximal duodenum and middle part of the jejunum were immediately removed. The intestinal mucosa was scraped, transferred in saline solution (5 ml) and centrifuged as per the modified method of [13]. The intestinal ALP was measured using autoanalyser (Erba CHEM-5 Plus V2). 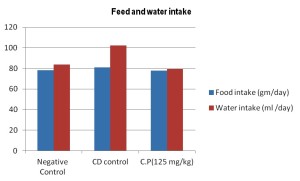 FIG. 1: EFFECT OF C. PENTANDRA ON FEED AND WATER INTAKE

DISCUSSION: Various animal models of obesity have been used to emulate obesity like condition in humans, in order to develop effective antiobesity treatments. Among the animal models of obesity, rats that are fed a high fat diet are considered useful; a high percentage of fat in their diet is considered to be an important factor in the development of obesity, leading to accumulation of fat into the body, even in the absence of an increase in calorie intake 14.

TABLE 4: EFFECT OF C. PENTANDRA ON WEIGHT OF LIVER AND FAT PADS (PERIRENAL, EPIDIDYMIS AND MESENTERIC)

The present study showed that administration of a CD for twelve weeks, in Wistar albino rats produces obesity with increase in body weight, parametrial adipose tissue weight and serum lipid levels. The ethanolic extract of C. pentandra showed significant decrease in body weight as compared to CD control group. Upon administration of ethanolic extract of C. pentandra no decrease in total cholesterol, serum triglycerides, LDL and VLDL and no increase in HDL level were observed which reveals that the drug does not have any effect on the metabolism of fats in liver. The significant decrease in level of intestinal ALP in C. pentandra treated group indicates that it may decrease fat absorption by preventing the breakdown of dietary fat in the gastrointestinal tract. It was also observed that ethanolic extract of C. pentandra slightly decreases the food and water intake measured for 84 days, indicating that it might not suppress the appetite.

Administration of C. pentandra for twelve weeks, showed significant decrease in the weight of liver and fat pads (perirenal, epididymis and mesentric) as compared to CD control. The body mass index (g/cm2) was decreased indicating the sign of anti-obesity activity.

CONCLUSION: The ethanolic extract of C. pentandra may exert its effect via central nervous system, acting on the thermoregulation centre in the hypothalamus, causing thermogenisis thereby leading lipolysis and contributing to weight loss. Also by decreasing the level of intestinal ALP, it may decrease fat absorption by preventing the breakdown of dietary fat in the gastrointestinal tract. When the extract treated group was compared to CD control, it does not produce promising hypolipidaemic effect. The dose of C. pentandra (125 mg/kg) can be the optimal dose showing anti-obesity activity. In conclusion, the results of this study showed that C. pentandra has therapeutic potential in the management of obesity.

CONFLICT OF INTEREST: No conﬂict of interest declared.

ACKNOWLEDGEMENTS: Authors are thankful to Sinhgad Technical Education Society’s Smt. Kashibai Navale College of Pharmacy, for funding the research work. The funding authority agency did not have any role in collection, analysis, interpretation of data or writing of the report.