The species has a wide distribution over diverse ecological niche as forty-four ecoraces but only a few are semi-domesticated and applied commercially for seed (egg) and silk production 3.

The physiological potential of life performance of the insect is always challenged by the abundance of food and its quality, various abiotic factors, presence of predators, parasites and diseases which affect the cocoon yield. In outdoor forest rearing, pest and predators attack the larvae and pupae of A. mylitta causing 40-45% loss 4. It has been estimated that in hibernating stock about 20-30% loss of seed cocoons due to pupal mortality and unseasonal emergence which in turn reduces the multiplication rate of tasar cocoons.

Agricultural insect pest management is largely dependent on the use of chemical insecticides. However, the problems associated with insecticide usage are environmental pollution, development of resistance in the pests, etc. Pheromone trapping can provide tools for monitoring the activity of target insects, providing information that will assist in insect pest management. Pheromones are efficient at low pest population densities, with no adverse effect on natural enemies, and their use leads to a long-term reduction in insect pest populations that cannot be accomplished with conventional insecticides 9. Traps baited with pheromone lures will be helpful in early detection of pest, mating disruption and timing of management procedures based on threshold 10. Mass trapping of cocoa mirids has been efficiently done by pheromone trapping 11.

Synthetic pheromone is used to permeate the atmosphere so that an insect will be unsuccessful in finding a mate 12. The pheromone Ethyl (Z)-9-hexadecenoate of female Syndipnus, a sawfly parasitoid of class Ichneumonidae and Pteromalus cerealellae have been identified and are used for management of these pests by attracting the male Syndipnus 13, 14. The acetates of pentadecanol are used for mating disruption in pine sawfly Neodiprion sertifer has reduced the male saw fly by trapping 15. Mating disruption by an artificial release of the sex pheromone components like Tetradecyl acetate and Ethyl (Z)-9-hexadecenoate may be a feasible method to control Xanthopimpla predator. The present study focuses on the identification of suitable synthetic pheromones of different concentrations for mating disruption of Xanthopimpla predator by laboratory and field studies, to reduce infestation and to increase the silk yield.

Rearing of Xanthopimpla Predator: Xantho-pimpla predator was collected from the Terminalia arjuna field immediately after emerging from the infested cocoons. They were reared in the laboratory under a photoperiod of 12 h L: 12 h D, at 28 ± 2 °C temperature and 75-80% humidity. Adult Xanthopimpla were kept in mica boxes and fed with sugar syrup.

Wind-tunnel Bio-assays: A wind tunnel of 1 m wide × 1 m high × 3 m long was used 16. Two-speed fans (D8025B12M, Elan Vital, Taiwan) one at the tunnel input and the other on the exhaust with a wind speed of 40-50 cm/s were used and speed was verified with an anemometer (Mastech MS 6250). Experiments were conducted at 24-26 °C with a relative humidity of 50-60%. 25-W lights, on each side of the room including the room ceiling and tunnel wall, were set with a rheostat to provide a diffuse light of 8–12 lux in the wind tunnel. THIEYE 160+4K Ultra HD camera (2 Inch screen, 170-degree wide lens, 12 MP photos, shutter speed 1/100 sec) mounted in the wind tunnel towards the downwind end to record the male Xanthopimpla behavior to the source 17.

All experiments were conducted during the last 3 h of scotophase, the period when female Xanthopimpla call and mate. Rubber septa loaded with synthetic pheromones placed inside a hair roller which consists of a tubular plastic frame covered with plastic mesh (6 cm length, 1.5 diameters) that was closed on each end with a Styrofoam lid. Septa were loaded with different concentrations of Tetradecyl acetate (A), Ethyl (Z)-9-hexadecenoate (B), A and B blend in 1:1 ratio (C) and control septa. Test males were brought into the assay room and transferred into small wire mesh (4 cm diam × 6 cm high) cage, with one end open and the other closed. Male Xanthopimpla of 24-48 h old were released in the wind tunnel. Males were acclimated to the conditions of the assay room for 1-4 h before being tested. The closed-end of the cage was placed facing upwind, on a mesh stand placed 20 cm above the tunnel floor and 160 cm downwind of the pheromone source.

Once the male Xanthopimpla began wing fanning, the cage was rotated 180°, thereby allowing male Xanthopimpla to initiate an upwind flight. Males started flying towards the source. Test males were used once are discarded.

Rearing of Anthereae Mylitta Drury: The cocoons harvested from first crop, second crop, and the third crop was subjected for selection for second, third crop and first crops. First, second and third crops cocoons were preserved in the rooms under a temperature of 29 ± 1 ºC and humidity 70 ± 1%. The emerged moths were tested for pebrine disease by a method derived from that used in sericulture 18. The eggs laid by healthy moths were collected and incubated for hatching. Hatched larvae were reared on Terminalia plantation in all three crops. The effective rate or rearing in the first, second and third crop was recorded as follows:

Field Tests: Tests were conducted in Terminalia arjuna plantation (Host plant of Anthereae mylitta drury) at Chenoor, Adilabad District, Telangana during the year 2018 in all the three crops. Terminalia field of 2700 m2 (45 m × 60 m) where host plants were separated by 2 feet × 2 feet in rows and columns. Each plant with five traps containing different concentrations of each synthetic pheromone and one control trap were suspended in tree crowns at 20 m apart. The trapped Xanthopimpla males were counted every week and traps were rotated two positions after each census. Three field tests were conducted comparing the attractiveness of Tetradecyl acetate (A), Ethyl (Z)-9-hexadecenoate (B) and a blend of both (C) in 1:1 ratio in different concentrations like 0.2, 04, 0.6, 0.8 and 1 mg.

Dose-Response: The lures and dispensers used infield were prepared and supplied by Agri phero solution z, (Hyderabad, Telangana, India). Lures were collected from the same batch and stored at 4 °C until use. Commercial sex pheromone lures composed of these major components attract the male Xanthopimpla. The male response to synthetic pheromone was evaluated in first, second and third crops. In the first crop traps (n = 16) were employed in Terminalia field from June 3 to July 30, 2018, in the second crop traps (n = 16) were employed from August 8 to September 30, 2018 and in the third crop traps (n = 16) were employed from October 6 to December 20, 2018. In all the trials 5 traps baited with the pheromone loads of 0.2, 0.4, 0.6 ,0.8 and 1.0 mg of Tetradecyl acetate, 5 traps with Ethyl (Z)-9-hexadecenoate and 5 traps with a blend of both in 1:1 ratio. One blank control trap without any type of solvent is used in all the three crops. Lures attracted more males.

Statistical Analysis: Captures are displayed as mean values of males/week/trap. The effect of mating disruption was evaluated as mean number of males trapped per week for each period.

As different concentrations like 0.2, 0.4, 0.6, 0.8 and 1.0 mg of these synthetic lures were used, blend with 1.0 mg had shown more attraction towards Xanthopimpla predator. The use of this blend as a disruption chemical will solve the problem of Xanthopimpla infestation. Optimizing pheromone deployment for effective mating disruption is vital 19. 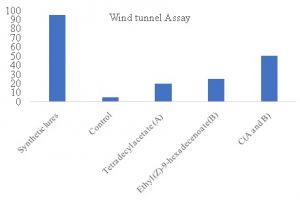 A significant increase in male capture was observed in traps baited with A and B blends in 1:1 ratio (C). It is also observed that as the concentration increased, males trapped were also increased. In comparison with Tetradecyl acetate (A) and Ethyl (Z)-9-hexadecenoate (B) traps baited with the blend caught 157% and 50% more male Xanthopimpla respectively. Present studies are in correlation with the studies of Trissolcus a hymenopteran insect 26. The studies on this insect have shown that virgin male Trissolcus have shown a positive response to Tetradecyl acetate, Ethyl (Z)-9-hexadecenoate GC-EAD components on exposure to EAG machine 27. Present results also show that the number of Xanthopimpla trapped was more in the third crop than first and second crops. This may be because of the prevalence of Xanthopimpla predator during this period. Ichneumon fly is a serious and prevalent fly in the fields of Terminalia arjuna during the months of November and December which is the third crop of Anthereae mylitta drury 28. In association with different abiotic factors pests and predators also plays a major role in survivability of tasar silkworm in outdoor rearing fields 29.

Table 4, 5, 6 explains the rearing performance of Anthereae mylitta drury. Among 500 larvae brushed on Terminalia arjuna plantation during first, second and third crops, with Tetradecyl acetate (A) traps, Ethyl (Z)-9-hexadecenoate(B) traps and traps baited with A and B blend in 1:1 ratio (C) of different concentrations like 0.2, 0.4, 0.6, 0.8 and 1.0 mg. In all the three crops larvae brushed on Terminalia arjuna with pheromone traps baited with A and B blend has shown more cocoon yield and ERR%  compared to Tetradecyl acetate (A) traps, Ethyl (Z)-9-hexadecenoate(B) traps control traps. It is also observed that the infestation rate is least in the cocoons reared on Terminalia plantation with traps baited with A and B blend followed by Ethyl (Z)-9-hexadecenoate (B) traps, Tetradecyl acetate (A) traps and control traps. In the members of lepidoptera successful application of Tetradecyl acetate (A) and dodecenyl acetate has reduced the infestation and loss by 91% 30. These results are the first demonstration of the efficacy of synthetic pheromone components for Xanthopimpla predator in field conditions. The present study suggests the feasibility of pheromone-based monitoring as a simple and low-cost technique for management of the Xanthopimpla predator infestation on tasar cocoons.

CONCLUSION: Thus, in conclusion, Xantho-pimpla predator infestation can be controlled by using a blend of tetradecyl acetate and ethyl (Z)-9-hexadecenoate in 1:1 ratio with 1mg concentration and is an efficient mating disruption synthetic pheromone.

ACKNOWLEDGEMENT: The author would like to thank UGC-New Delhi, for providing financial assistance in the form of Post - Doctoral Fellowship for Women.

CONFLICTS OF INTEREST: I declare that I have no conflict of interest.