ABSTRACT: Objective: The aim of this study is to investigate whether exposure to subclinical dose of sodium nitrite for long term can trigger histopathological changes which are able to detect by using hematoxylin and eosin stain. Sodium nitrite has various properties that make it widely used in industrial and pharmaceutical fields.  Method: Three groups of mice were used in this study; the first group was administered sodium nitrite in the drinking water for six months and the second group for eighteen months meantime the third one was used as a control. Then histopathological examination was done. Results: The results revealed that there were histopathological changes in the various tissues and organs which appeared in both exposed groups. Most changes mainly reversible except few areas in the liver and no obvious carcinogenic changes were detected by hematoxylin and eosin stain. Conclusion: The ultimate conclusion obtained from this study indicated that prolonged exposure to subclinical dose of sodium nitrite induced reversible histopathological changes in different tissues and organs except few and small areas in the liver.

INTRODUCTION: Sodium nitrite has unique pharmacological and industrial properties; it has been used in human and veterinary medicines as a hypoxic potentiates vasodilators and cyto-protective agent in ischemic conditions 1, 2, also as bronchodilator, intestinal relaxant, and antidote for cyanide poisoning 3. On the other hand, it's properties make it useful in many industrial fields, such as food industry, which is commonly used as a food additive (E249 and E250) especially in curing meat and fish, due to its action as a preservative to prevent microbial contamination 2 and to prevent rancidity by inhibit lipid oxidation 4, 5 and as a color fixative to keep the appearance and taste of the cured meat looks like a fresh meat 3.

While the preservative effect, make it useful in the pharmaceutical industry to prevent contamination with microorganisms 2. Other industrial usage it importance in manufacturing of different things such as rubber, chemical compounds, many dyes diazo-dye, nitrose compounds, other inorganic  compounds in dyeing and textile fabrics and bleaching fibers, also it is used in the laboratory of photography as a laboratory reagent and anti-corrosion 4. Additionally it is used metal coating and phosphatising detaining usage 3.

Naturally leafy vegetables such as spinach and beetroot, carrot and pomegranate juice are especially rich in inorganic nitrate 5 which has anticancer and anti-inflammatory properties, in addition to previous mentioned properties as enhancing blood flow, reduce blood pressure and reduce risk for stroke 6, 7, 8. However, previous studies reported that the sodium nitrate and its derivatives are co-promoters of carcinogenesis, especially the nitrosamine group 4. The nitrate is absorbed in the small intestine, concentrated in the salivary glands, and secreted by salivary glands. The oral micro-flora reduces the nitrate, into nitrite and the nitrite, in contact with the acid pH converts to nitrous oxide. Instead, studies proposed that sodium nitrite as one of several potential agents in food borne risk of colorectal cancer 9, and also it increases esophageal carcinoma in long term exposure to it 10.  While other studies showed that no carcinogenic effect of sodium nitrite alone in the body's tissues but when combined with antioxidant it acts as promoter in initiated tissue 11.

Our present study is proposed to evaluate if exposure to low dose of sodium nitrite for long term has ability to develop pathological changes on mice which can be detected histologically by using the routine stain (hematoxylin and eosin).

Methodology: Thirty adult BALB/C mice, (body weight 30 - 35 g and at 6 weeks of age) were obtained from the Animal House of Breeding Facility Laboratory Animal Unite/ pharmacology and Toxicology Department/ University of Baghadad, where the experimental procedure of this study were approved by its Ethical Committee. The mice were divided into three groups, and manipulated as the following: sodium nitrite was added at 2000 ppm to drinking water for six months to the first group, and for 18 months for the second group, while, the drinking water of the third group was remained free of adding and used as a control 12.

At the end of time the animals were sacrificed and the organs were preserved in buffer formalin for histopathological examination.

RESULTS: All the following histopathological changes appeared in the groups exposed to sodium nitrite: 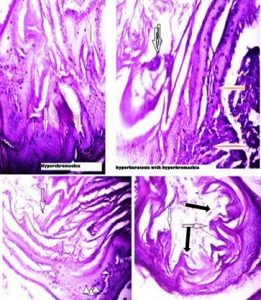 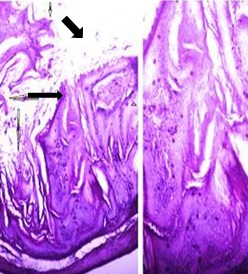 Liver: the hepatocytes arranged disorderly, and underwent swollen with sparse cytoplasm with cytoplasmic vacuolation (Fig. 2), few and small areas of necrosis were appeared especially in the areas near the central veins (Fig. 2 and 3). The nuclei of hepatocytes appeared larger, irregular shape, pleomorphism, with hyperchomasia and few mitotic figures were seen (Fig. 3), in addition to mild to moderate hemosiderosis were found. 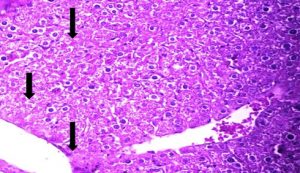 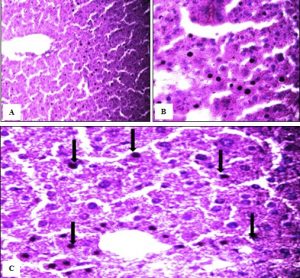 Spleen: Megakaryocytes appeared in the spleen which represented the main detectable change in this organ was seen in exposed groups Fig. 4. 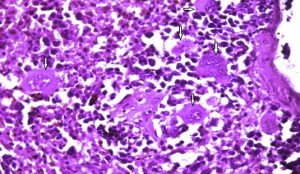 Lungs: There was congestion in the pulmonary blood vessels, and the capillaries in the alveolar walls were engorged with blood that leads to leakages of blood and hemorrhage in the alveolar wall and alveoli with inflammatory cells were seen. Fig. 5. 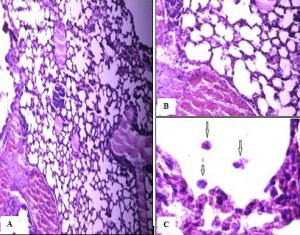 Heart: there were no detectable histopathological changes in the heart except congestion in the blood vessels. 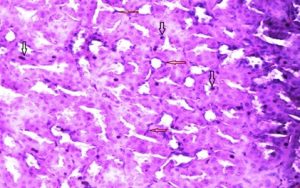 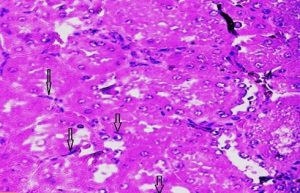 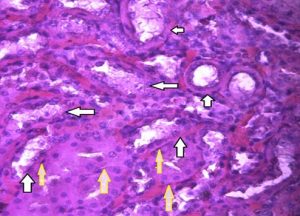 DISCUSSION: There is a suggestion that free radicals and nitroseamine can be formed, due to reaction between sodium nitrite and amines of foods in the stomach and these products have carcinogenic effects on different tissues and organs 13. The present study was carried out to determine whether exposure to small dose of NaNO2 for long period can induce histopathological changes which can be detected by routine stain. Our results indicate harmful effects of NaNO2 on the tissues and organs including; forestomach, liver, kidneys, spleen and lungs.

Hyperkeratosis and hyperchromatia of epithial cells of forestomach (non glandular stomach) appeared in the exposed groups without evidence on papilloma or squamous cell carcinoma can be detected. These observations consist with Kuroiwa et al., 2007 11 and Kuroiwa et al., 2008 14, they reported that NaNO2 alone failed to act as a promoter to exert carcinogenic changes in non-glandular stomach but when combine with green tea catechins or ascorbic acid, clearly, induce carcinogenesis in forestomach but not glandular stomach.

They attributed this contrast effect on stomach due to difference in the protective factors such as mucus formation, epithelial thickness and the level of antioxidant enzymes.

The main histopathological changes observed in the liver in the exposed groups probably triggered by reactive oxygen and nitrogen species that produced by NaNO2 9, 15. Cytoplasmic vacuolation, nuclear hyperchromasia and focal necrosis, all these changes are histological pattern of drug - induced liver injury (DILI) 16.

The appearance of megakaryocytes in the spleen indicates that the process of hemopoiesis was taken place in the groups treated with NaNO2, this observation is agree with Ashmore et al., 2016 17 who reported that sodium nitrate acts to decrease hemoglobin in the blood and as a reversal of this effect appears by increased secretion of erythropieotin by kidney which leads to induce hemopoiesis. Also combined working by FAO/ WHO reported that sodium nitrite binds with hemoglobin that leads to convert hemoglobin to methmoglobin, which has no or little affinity to carry O2 that leads increase synthesis of RBC to compensate this defect in the capacity of O2 transport 18. Regeneration in the renal tubules leads to think that effect of sodium nitrite are reversible even when exposure chronically.

ACKNOWLEDGEMENT: We thank everyone who assisted in this work.