Madhuri A. Hinge * and Dipti Patel

INTRODUCTION: The development of CLS and ILS chemometric methods for the analysis of multi-components can be used for the resolution of the complex spectra of mixtures of analytes 1. The chemometric techniques have many applications and advantages over traditional spectrophotometric methods, such as the mixtures can be analyzed without any separation procedures for drug determination; these techniques are very easy to apply for routine analysis, sensitive, useful, and yet very economical as compared to other analytical techniques for simultaneous determination of compounds in multicomponent mixtures.

These methods provide additional advantages that calibration can be performed in the presence of the other interfering components in different concentrations without affecting the analyte of interest. The determination of components in a mixture becomes fast and accurate 2, 3. Hydrochlorothiazide  (HCT) is an Antihypertensive and diuretic drug; chemically it is 6-chloro-3,4-di hydro-2H-1,2,4-benzothiadiazine-7-sulfonamide- 1,1-dioxide Fig. 1.

It is useful in the treatment of hypertension and used as a diuretic, and it reduces extra fluid in the body (edema) caused by conditions such as heart failure, liver disease or kidney disease 4, 5, 6. Methyldopa (MED) is designated chemically as (2S) – 2 – amino – 3 - (3, 4 - dihydroxyphenyl) – 2 - methylpropanoic acid Fig. 2 and it belongs to a class of drugs called centrally acting antiadrenergic. It is used alone or with other medicines to treat high blood pressure. It works by relaxing the blood vessels so that blood can flow easily through the body 4, 5, 7. Hydrochloro-thiazide is official in IP 20148, BP 20099 and USP 200410 and assayed by Potentiometry in IP and BP and by Liquid chromatography in USP. Methyldopa is official in IP 201411, BP 200912, and USP 200713 and analyzed by nonaqueous titrimetry in IP and USP and by Potentiometry in BP. 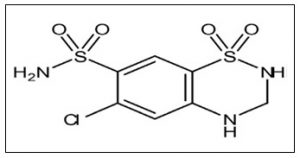 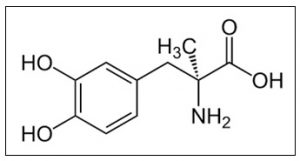 MATERIALS AND METHODS: Commercial tablets Aldoril each with composition (mg/tablet) 25 mg Hydrochlorothiazide and 250 mg Methyldopa were taken for analysis. Hydrochloro-thiazide was received as a gift sample from Sun Pharmaceuticals. Methyldopa was received as a gift sample from Themis Pharma. Methanol used for analysis was of AR Grade and Distilled Water. A Shimadzu UV-Vis double beam spectrophotometer was used for the spectrophotometric determination of drugs for CLS and ILS. The spectrophotometer was equipped with 1 cm quartz cells and connected to the computer with UV Probe Ver.2.10 software for data processing. The chemometric analysis of CLS and ILS methods was carried out using the Chemometrics Toolbox 3.02 software along with MATLAB R2015a Software and Excel.

Preparation of Standard Solutions and Solution of the Calibration Set: The mixtures of both the drugs were prepared. The stock solution (1000 µg/ml) of HCT and MED were prepared separately by dissolving 10 mg of both drugs in 10 ml methanol. Appropriate dilutions were made further, and the zero-order spectra were recorded over the wavelength range 200-400 nm using methanol as blank. Then dilutions were made in methanol to obtain concentrations ranging from 3-7 μg/ml for HCT and 30-70 μg/ml for MED and their different synthetic mixtures by using the stock solutions.

Preparation of Binary Mixtures of HCT and MED: Appropriate and accurate volume aliquots from the above stock solutions of HCT and MED were transferred to the two sets of calibrated flasks. The calibration set of 15 and validation set of 10 standard mixture solutions were prepared which contains the HCT and MED in different ratios of concentrations. These solutions were prepared randomly within the linearity range of two drugs. The resulting solutions were scanned between 230 to 290 nm, and absorbance was measured at 31 wavelength points with an interval of 2 nm.  The absorbance data matrix was obtained.

TABLE 2: COMPOSITION OF VALIDATION SET FOR ALL TWO CONSTITUENTS USED IN CLS AND ILS TECHNIQUES.

Preparation of Sample Solutions: Twenty tablets of the brand (Aldoril) were weighed separately and powdered by using mortar and pestle. An amount equivalent to 250 mg of MED of the tablet powder was taken in a 25 ml volumetric flask and dissolved in methanol. The solution was sonicated and filtered through Whatman filter paper number 41. The volume of solution was made up to the mark with methanol. The solutions were further diluted with methanol to match the concentration of the calibration range. After the spectral measurement, the proposed chemometric methods were applied to the spectral data.

Classical Least Squares (CLS) Method: CLS is a simple method that is based on a linear relationship between the absorbance and the concentrations of components at each wavelength.

In matrix notation, the Beer’s law model for m calibration standard solutions containing l chemical components with spectra of n computed absorbance is given by the following equation 1, 2,

It consists of the inverse of Beer’s law model for m calibration standards solutions with spectra of n computed absorbance is given by the following equation 1, 2,

Where C and A are concentration and Absorbance as mentioned in the CLS method, P is the n × l matrix of unknown calibration co-efficient relating the l component concentrations of the spectral intensities, and Ec is the m × l vector of errors.

For the estimation of these drugs in conditions when their spectra are overlapped, the chemometric calibrations using the zero-order spectra have been applied. 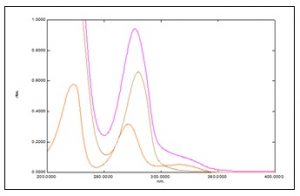 Multivariate Calibration:  The calibration set of 15 standard mixture solutions, which contain the concentrations with different ratios of HCT and MED was randomly prepared within the linearity range of two drugs. The UV absorbance data was obtained by measuring the absorbance in the region of 230-290 nm. By using the correlation between calibration concentrations and its absorbance data, the chemometric calibrations were calibrated within the CLS and ILS algorithms. The analysis of multi-component mixture depends on the wavelength range selected, a spectral model used, calibration set is chosen, and calibration range of the components in the mixture. All the information present in the sample target should be present in the calibration data set.

It has been one of the main drawbacks in development studies of the multivariate method. In the CLS technique full spectrum, computational procedures are applied, and the selection of wavelength is unnecessary. So all available wavelengths were often used. Stepwise multiple linear regressions have been used for the selection of frequencies in the ILS method.

Statistical Parameter: The regression model can be applied predictively, which is described in different ways. The chemometric methods are expressed in terms of the standard error of prediction (SEP) and standard error of calibration (SEC) and is given in the following formula;

In the above equation, C is the predicted concentration of drugs HCT and MED in mixture and n is the total number of the mixtures prepared of both drugs.

The SEP and SEC results and other statistical result data obtained by applying CLS and ILS to the above-mentioned validation set of the synthetic mixtures of both drugs are mentioned in Table 3.

The validity (predictive ability) of the calibration models was checked by performing the simultaneous analysis of the validation (prediction) set containing 10 samples of different concentrations of HCT and MED.

The optimum values of the mean percent errors of CLS and ILS for the same set of mixtures were found to be small and within an acceptable limit.

The mean recoveries and the relative standard deviations for the proposed methods were calculated and are given in Tables 4 and 5. The results obtained were completely within acceptable limits because of their smallest values and hence found satisfactory for the validation of all calibration methods. The linearity of the proposed chemometric method for the determination of HCT and MED was evaluated by analyzing a series of different concentrations of standard drugs. The linearity was found to be in the range of 3-7 μg/ml for HCT and 30-70 μg/ml for MED. Each concentration was repeatedly measured three times. The accuracy study was performed by standard addition of known amounts of pure drugs to a measured fixed concentration of the tablet formulations. A fixed volume or concentration of the sample solution was taken, and then a known volume of working standard solutions was spiked. Finally, the volume in each flask was made up to the mark with methanol and mixed well. Then the resulting mixture solutions were analyzed, and recoveries of both drugs in chemometric methods were determined. The results obtained were compared with the expected results. The results of the recovery study and standard deviation values are shown in Tables 4 and 5. The result indicates that the proposed methods are accurate, and there is no interference from formulation excipients. The selectivity of the proposed method was estimated by the analysis of synthetic mixtures. The satisfactory results were obtained over the stated calibration range.

The prescribed model is a key for the achievement of correct quantitation in CLS and ILS calibrations. The resulting models were validated by prediction of the concentration of analytes in a separate validation set which was not used in the method development. The RMSEP values are represented in Table 3. 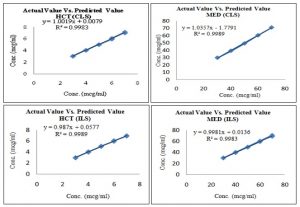 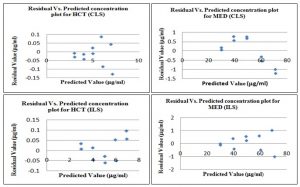 The predictive abilities of the models were evaluated by plotting the actual known concen-trations against the predicted concentrations which are shown in Fig. 4. The figure indicates that there was a good concurrence between the predicted (calculated) concentration and the actual concen-tration of drugs. The means recoveries and the relative standard deviation of proposed methods were computed and indicated in Table 4 to 5 for HCT and MED, respectively. Another distinctive test was carried out by plotting the concentration residuals against the predicted concentrations. Fig. 5 shows that the residual values appear randomly distributed around zero, indicating adequate model building. The good results of correlation coefficient (r2) and slope values were obtained for both drugs in the validation set by CLS and ILS optimized models. The result indicates the good predictive abilities of the models. The assay results are given in Table 6. The summary of CLS and ILS methods is given in Table 7.

Assay of Marketed Formulation:  Twenty tablets were weighed accurately and finely powdered. Tablet powder equivalent to about 250 mg of MED and 25 mg of HCT was weighed accurately and transferred to a 25 mL volumetric flask, and 10 mL of methanol was added to dissolve the drugs. The solution was then sonicated for 15 min and diluted up to the mark with methanol and the resulting solution was filtered through a Whatman filter paper no.41. From this solution, dilutions were made to get the final solution containing 5 μg/mL of MED and 50 μg/mL of HCT.

The analysis procedure was repeated three times for tablet formulation. The result of an assay is shown in Table 6.

CONCLUSION: Many formulations are used in combined dosage forms for better management of the therapy of various disorders. These combinations have forged a challenge to use a simple method to estimate the individual drugs in combination with respect to time and complexity. Simultaneous determination of Hydrochloro-thiazide and Methyldopa in a tablet is not reported in the literature as yet. The chemometric methods are economical as compare to other analytical methods and do not require sophisticated instrumentation and any prior separation of the components. The proposed chemometric assisted spectrophotometric methods are applicable, prompt, and accurate for the simultaneous determination of Hydrochlorothiazide and Methyldopa in their synthetic mixtures and tablet dosage form.

In this work, two chemometric methods i.e. CLS and ILS are described. The CLS and ILS methods are found to be simple, precise, accurate, rapid, and economical for their simultaneous determination of drugs. The methods were validated for different parameters and can be used in quality control laboratories.

ACKNOWLEDGEMENT: The authors express their sincere thanks to Sun Pharmaceuticals, India, and Themis Laboratories, India, for supplying gift samples of Hydrochlorothiazide and Methyldopa as Active Pharmaceutical Ingredients. The author is thankful to ROFEL Shri G.M. Bilakhia College of Pharmacy, Vapi, for providing the facility for research work.

CONFLICTS OF INTEREST: The authors not having any conflicts of interest.

Madhuri A. Hinge * and Dipti Patel