ABSTRACT: Objective: To investigate the patient’s knowledge of hypertension fact with validated Morisky questionnaires and management of drug adherence. Materials and Methods: The aim of one present study was undertaken 100 patients attending the cardiology, outpatient department in various private sector hospitals in southern Tamilnadu and to assess the patient’s medication knowledge and drug adherence on hypertension with validated questionnaires method. Results: Out of 100 hypertensive patients (17%) of the subjects had adequate, (21%) of the patients had moderate medication knowledge about hypertension or maximum while (62%) were categorized as poor medication and adherence 35% of the people are in medium adherence only 3% are in high adherence. Conclusion: The disease knowledge of subjects’ rate was low, and patients were unsure of the benefits of continuous medication use and resulted in non-adherence. Educating hypertensive patients clarifying doubt regarding the benefits of adherence, medication uses, and control hypertension.

INTRODUCTION: Hypertension is a widely prevalent disease and a major risk factor for adverse cardiovascular events, including stroke, coronary artery diseases, peripheral vascular disease, heart failure, and chronic kidney disease. In primary prevention studies, there is a continuous relationship between blood pressure and adverse cardiovascular outcomes, including. This relationship holds even within the level of blood pressure previously defined as normal. The growing appreciation of the importance of even mild hypertension has contributed to periodic revisions in the clinical approach to this disease, including criteria for the diagnosis of hypertension, stratification of hypertension severity and indications for treatment 1.

This study aimed to investigate the patient’s knowledge of hypertension fact with validated Morisky questionnaires and management of drug adherence.

Study Settings: Patients for this study were obtained from four hospitals in Tamil Nadu, India. All these hospitals are situated in a low socioeconomic area with the middle class population. Hence we hope the knowledge, perception, attitudes, and lifestyle practices of the community will be representative of the area.

Study Period: The study was conducted for a period of 8 months from May 2012 to December 2012.

Ethics: The Independent ethics committee approved the study in a proper forum. After proper approval, one hundred patients who accepted to participate were included in the study. After obtaining patient consent, the subjects were interviewed to gather clinical and demographic details.

Diagnosis of Hypertension: Hypertension was diagnosed by measurement of systolic and diastolic BP with a standard mercury sphygmomanometer on both arms at the same period of the day on at least two occasions using standardized methods

Inclusion and Exclusion Criteria: Those who were eligible for inclusion into this descriptive cross-sectional, qualitative phenomenological survey were a cohort of 100 adult male and female hypertensive patients drawn from 4 randomly selected health facilities in Tamil Nadu. Participants with a systolic blood pressure (SBP) above120 mmHg and diastolic blood pressure (DBP) above 80 mmHg and who were willing to participate in the study were included whereas patients who were pregnant excluded.

Morisky scale consists of 8-point questions (never / rarely / sometimes / often / always) and a set of open-ended questions regarding reasons for non- adherence. Scores for the scale range from Low Adherence (< 6), Medium Adherence (6 to <8) and High Adherence (= 8)

Higher the scores are indicative of worse adherence. All the subjects answered ‘YES’ for at least one question, and they were considered as non- adherent.

Hypertension control begins with detection and continued surveillance; initial readings should be confirmed with subsequent readings for several weeks unless the pressure is dangerously high at the first reading. The goal of therapy is to prevent the morbidity and mortality associated with high blood pressure and reduces the pressure by the least intrusive means possible 3.

In the present study, diseases knowledge suggesting that there are other factors for the hypertensive patients who need to the explored6. Hypertensive patients had minimum knowledge about diseases. In the content of the south Indian population, the effect of responses to hypertension knowledge possessed by the subjects on medication is still uncertain as there was no previous study in the same location that can compare with present status 7. 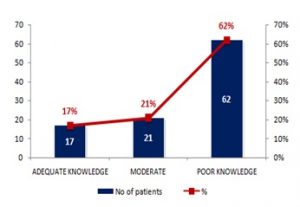 Reason for Nonadherence: 100 patients were asked to understand their reason for nonadherence to the treatment for HBP. 15 universal reasons has been listed and asked the patients to select Table 2. 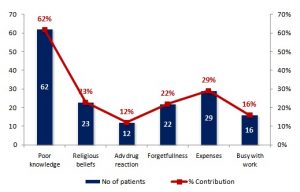 Out of 15 reasons, only 6 reasons got one of the responses.

From the above questionnaire response, we can conclude that there are two major responses for the nonadherence that is Poor knowledge about the disease and their side effects and also the affordability or the perception towards the treatment expenses.

Drug Adherence: The Table 3 described drug adherence response had been interviewed with 100 patients to know about their seriousness in taking the pills as per doctor’s advice. The questionnaire contains eight questions out of which seven are yes or no questions, and the eighth one is the multiple choice question. The following table and chart represent the drug adherence of the patients 10.

Total Points used to find out the level of adherence is mentioned in the below Table 4.

CONCLUSION: The current study estimated adequate reasons for disease knowledge and medication non- adherence to be greater than that of unintentional non-adherence.