INTRODUCTION: Diabetes mellitus is a group of metabolic disorders characterized by increased blood glucose levels due to the absence of insulin secretion or peripheral insulin resistance. Impaired metabolism of a number of biomolecules such as glucose, lipids, proteins and glycoproteins has been reported in diabetes mellitus. Type 1 and type 2 diabetes mellitus are the most common forms of diabetes mellitus 1.

It is becoming a worldwide public health problem leading to macro and microvascular complications 2. Diabetic patients in the age group between 20 and 79 years are predicted to increase to 700 million by 2045 3. The primary medication for diabetes mellitus is oral hypoglycemic drugs and insulin injections.

The available antidiabetic drugs have various side effects and are not suitable for use during pregnancy. The usage of sulfonyl drugs induces β-cell death in isolated rodent and human islets, while glucagon-like peptide-1 receptor agonists and dipeptidyl peptidase-4 inhibitors have potential risks for pancreatitis, pancreatic and thyroid cancers.

Globally, health expenditure for the management of diabetes is expected to reach USD 490 billion in 2030 4. Therefore novel antidiabetic medicines are necessary 5. Another approach to the treatment of diabetes is the application of medicinal plants with phytochemicals that cause beta-cell regeneration leading to normal blood glucose in animals and humans 6.

Herbal therapies are proven safe and effective for healing diseases and have been the potential source for developing new drugs. A majority of people in the world rely on herbal therapy. Phytotherapy is the antecedent of modern drugs and one-third of the top-selling drugs in the world plant origins 8. Plants rich in polyphenolics have been given attention due to their therapeutic benefits 9. Hyperlipidemia is one of the important risk factors for cardiovascular diseases and conditions 10, 11.

Barleria cristata L. is a shrub found widely in subtropical Himalaya, Sikkim, and Central and South India. It has various medicinal and therapeutic uses. Different parts of the plant have been used in the treatment of various diseases like anemia, toothache, and cough 12, 13.

Decoction of root is used for treating rheumatism and pneumonia. Oil from leaf extract is used for ear and eye oinments. In the present study, efforts have been made to establish the scientific validity of this plant's hypoglycemic and hypolipidemic properties.

Fresh leaves were washed, shade dried, and then homogenized into fine powder by mixer grinder and used for further studies.

Phytochemical Screening of Plant Sample: The plant material was subjected to Soxhlet extraction with different solvents such as ethanol, acetone, chloroform, distilled water, petroleum ether, and benzene for 18 hours. The extracts were condensed and used to screen phytochemicals using standard procedures.

50% Hydroethanolic Extract preparation: About 5 kg of freshly collected leaves were shade dried and powdered. Then cold macerated with ethanol for 3 days with occasional stirring. The suspension was filtered through a fine muslin cloth. The water portion of the sample was evaporated at low temperature (approximately at 40 °C) under reduced pressure in a rotary evaporator. Dark brown coloured crystals obtained were stored in an air-tight desiccator. Whenever needed, the residues were dissolved in distilled water, filtered (Whatman No.1 filter paper), and used for the studies.

The rats were grouped and housed in polyacrylic cages and maintained under standard conditions (25 ± 2°C) with 12 ± 1 h dark/light cycle. The animals were fed with rat pellet (Hindustan Lever Ltd., Bangalore, India) and water ad libitum.

Acute Toxicity Study: The 50% hydroethanolic extracts of Barleria cristata L. leaf were tested for its acute toxicity in Wistar albino rats by the method described by Miller and Tainter 14. Overnight fasted rats weighing between 120-150g were divided into 6 groups, containing 5 animals each. Test samples were administered separately in various doses by oral route. The toxicity determinations were done for the doses of 2, 4, 6, 8, 10 g/kg b.w. The LD50 was calculated graphically and theoretically using the formula;

Where n – number of animals in each group. The corrected percentage was then transformed into probit values by referring to the table to transform percentage to probit.

A plot of log dose (on X-axis) vs. % mortality (on Y-axis) was plotted, and a line was obtained.

The log dose corresponding to probit 5 was determined, and its corresponding antilog value was computed, taken as the LD50 value.

Animals were allowed to fast for 18 hours and were injected intraperitoneally with freshly prepared alloxan monohydrate in sterile normal saline in a dose of 120 mg/kg body weight. After 72 h of injection, the rats with fasting blood glucose levels greater than 350 mg/dl were considered diabetic and were selected for the study.

Experimental Design: The overnight fasted rats were divided into 6 groups of 6 animals each.

To all the groups plant extract were administered orally once a day. The blood samples were drowned on 0th, 7th, 14th, 21th and 28th day by retro-orbital route under mild anaesthesia. At the end of treatment period blood samples were (1 – 1.5 ml) collected after mild chloroform anaesthesia and by the cardiac puncture. Serum was collected from blood by centrifuging at 3000 rpm for 20 min. The body weight of different animals was measured before and after treatment.

+, - symbols indicate the presence and absence of phytochemicals, respectively.

Preparation of 50% Hydroethanolic Extract of Plant Sample: From the phytochemical screening tests, it was clear that water and ethanol extract of plant sample showed the presence of biologically important phytoconstituents.

Hence, in the present study, 50% hydroethanolic extract of plant samples was chosen that could provide information related to constituents available from the plant.

Acute Toxicity Study of 50% Hydroethanolic Leaf Extract of Barleria cristata L.: The results for acute toxicity studies were tabulated as shown in Table 2.

Effect on Body Weight: All the animals from treated groups did not show any significant decrease in body weight following 28 days of treatment as compared with 0-day treatment. The experimental animals showed a slight increase in body weight which was statistically insignificant Table 3. From the result of this study, it was observed that the test sample was considered safe for long-term oral treatment at all normal therapeutic doses.

Effect on Body Weight: Normal control rats showed no change in their body weight during the treatment, but diabetic (G II) rats showed a significant reduction in body weight.

Effect on Fasting Blood Glucose: A marked increase in fasting blood glucose level was observed in diabetic control rats. In HLD fed rats, the effect of plant extract at a dose of 400 mg/kg b.w was highly significant than the 200 mg/kg b.w dose Table 5.

The plant extract effectively lowered the blood glucose level in diabetic and HLD fed conditions equal to glibenclamide treated and normal control animals. The results of this study are in accordance with the earlier reports on Lannea edulis 21, Hibiscus rosasinensis flower 22, C. batatas 23, Cynodon dactylon pers 24. 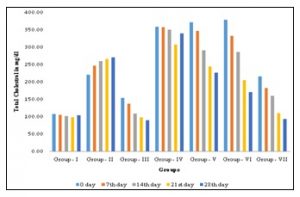 HLD Treatment groups at a dose of 200 and 400 mg/kg b.w showed a significant reduction of cholesterol levels in a dose-dependent manner.

There was no considerable difference in TG levels found in HLD control rats. In  200 mg/kg b.w dose-treated HLD rats significant (P<0.05) reduction of TG level was found in the first two weeks (17, 47%), but later days of treatment would not reduce TG level much significantly, whereas 400 mg/kg b.w plant extract treated HLD rats showed drastic lowering of (27%, 52%, 63%) TG level up to 3 weeks of treatment.

On 4th week the extracts had produced a significant lowering effect on TG level when compared to the previous weeks effect. 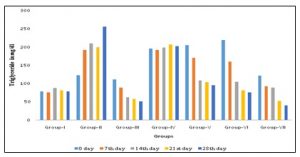 Effect on VLDL-Cholesterol: Administration of plant extract to HLD fed rats, and diabetic rats showed a lowering of VLDL-C level in animals. A similar effect was also found in glibenclamide-treated animals.

DISCUSSION: Medicinal plants play an important role in developing potent therapeutic agents. Plant-derived drugs came into use in modern medicine through the uses of plant material as an indigenous cure in folklore or traditional systems of medicine 27. The phytochemical screening of crude extract of Barleria cristata L. leaf revealed the presence of various bioactive components. The disease-curing properties of medicinal plants are due to various secondary metabolites. Thus, the preliminary screening tests are useful in detecting bioactive principles and may lead to the discovery and development of new drugs. This plant's antidiabetic and antilipidemic activity may be due to the presence of different phytochemicals 1.

An acute toxicity study of 50% hydroethanolic extract did not show any significant signs (or) symptoms of toxicity in normal rats proving their high safety for long-term oral treatment. Alloxan was one of the usual substances used for the induction of diabetes mellitus. It has a destructive effect on the β cells of the pancreas. Glibenclamide was an oral sulphonylurea antidiabetic preparation and was widely used as a standard drug in antidiabetic studies. Administration of plant extract to diabetic and HLD rats reduced the body weight confirming its lowering effects on lipid content. Plants with hypoglycemic activity act through multiple mechanisms, such as improving insulin sensitivity and insulin secretion. Administration of Barleria cristata L. leaf extract to diabetic and HLD fed rats showed a significant reduction in blood glucose level and lipid parameters, which confirms its hypoglycemic and hypolipidemic activity. The abnormally high level of serum lipid is mainly due to a decrease in lipolytic hormones' action on fat depots. In normal conditions, insulin activates the enzyme lipoprotein lipase, which hydrolyses triglycerides. However, in diabetic state, lipoprotein lipase is not activated due to insulin deficiency resulting in hypertriglyceridemia 28, and insulin deficiency is also associated with hypercholesterolemia due to metabolic abnormalities. In the present study, the diabetic rats showed hypercholesterolemia and hyper-triglyceridemia compared with those in normal rats. In the plant extract treated diabetic and HLD fed animal groups, TC and TG levels were significantly (P<0.05) decreased 29. It is known that the level of glycemic control is the major determinant of serum TG level. Several investigators demonstrated that near normalization of blood glucose level resulted in a significant reduction in plasma cholesterol and triglycerides levels 30.

ACKNOWLEDGEMENT:  Authors are thankful to the management of PSG CAS, Coimbatore, and Rathnavel Subramaniam college of arts and science, Coimbatore, for their support.