ABSTRACT: Inula racemosa, Bombax ceiba and Allium sativum are important class of drug known as “Rasayana”. The Polysaccharide fraction of all the three Drugs was isolated from hot water extraction yielding about 50-60% of fructan fraction (Polysaccharide). The polysaccharide fraction was evaluated for immunomodulatory activity by antibody titer and cellular immune response. The immunosuppressant drug azathioprine (100 mg/Kg/body weight) was used in order to evaluate the potency of immunomodulation of fructan fraction of rasayana drugs. The toxicological studies was made and a dose of 1000mg/Kg for Inula racemosa and Bombax ceiba and 1200mg/kg in case of Allium sativum was found to be not toxic. The non specific immunity determined by survival rate against Candida albicans infection was improved after treatment with fructan fraction. An increase in delayed type hypersensitivity response (DTH), % neutrophil adhesion and in vivo phagocytosis by carbon clearance method was observed after treatment with fructan fraction. The Immunostimulant activity of fructan fraction in dose of 200mg/kg of body weight was found to be more effective than 100mg/kg of body weight. The immunomodulation role of rasayana drugs is reported and established in several reported research but the present study claims the role of fructan fraction in immunomodulation

INTRODUCTION: Inula racemosa, Bombax ceiba and Allium sativum belongs to an important class of ayurvedic herbs which are known as “Rasayana” having immunostimulatory and adaptogenic properties. 1 The word “Rasayana” is composed of two words “Rasa” meaning elixir and “Ayana” meaning meaning house. The word therefore signifies the property of plants that help in rejuvenating the system. 2

Bombax ceiba is a tall tree widely distributed throughout India. The studies on root shows presence of protein, fatty acid, tannins, sugar,starch and monogalactan. A polysaccharide containing consisting of D-galactose, L-arabinose and L-rhamnose in the molecular ratio of 5:4:3 was isolated from the dried stamens and flowers. 4

Allium sativum is a hardy perennial herb cultivated throughout India. The bulb is used as a vermifuge, diuretic, carminative, diaphoretic, expectorant and stimulant. The chemical analysis have revealed the presence of carbohydrate, amino acid, pigments and pectins. The presence of organo sulphur compound gives distinctive odour to the Allium. 5

In recent decades, polysaccharides isolated from botanicals source (Mushroom, algae, lichens and higher plants) have attracted a great deal of attention in the biomedical arena because of their broad spectrum of therapeutic properties and relative low toxicity. 6, 7, 8

Fructans are fructose-based oligo- or polysaccharides present in many species of higher plants in which they serve as reverse of carbohydrates like starch and sucrose.9 The structural organization of all known fructans is based on (2-1) or (2-6) linked β-D-Fructofuranosyl units with one internal or external glucosyl residue.10

Plant Material: The root Inula racemosa & Bombax ceiba were obtained from S P Biotech Pvt ltd (Kanpur, Uttar Pradesh, India) and bulb of Allium sativum were procured from local market at Kanpur. A herbarium of the plant material was made and identified. A voucher specimen number INBCAS-15 has been submitted at the departmental herbarium advance institute of biotech and paramedical sciences Kanpur (U.P, India). The roots and bulb were dried coarsely powdered for extraction.

Extraction and Fractionation: Powdered roots and bulb were defatted with petroleum ether (60-80°C). Water extract of all the three drugs was prepared by extracting defatted root and bulb with water in Soxhlet apparatus reported earlier. The fractionation of water soluble extract was performed by the method of Thakur et al 11 (Fig. 1) 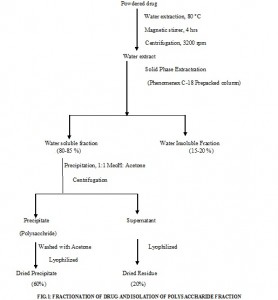 FIG.1: FRACTIONATION OF DRUG AND ISOLATION OF POLYSACCHARIDE FRACTION

Material: Sheep red blood cells (SRBC) were obtained from Haffkine Biopharmaceuticals Mumbai, India and washed thrice with large volume of pyrogen free sterile saline water and adjusted to a concentration of 5 x 10 9 cells per ml for Immunization and challenged. Azathioprine was obtained as gift sample. Candida albicans was purchased from IMTECH Chandigarh, India.

Rats: Wistar strain albino rats weighing between 140-150 gm of either sex were used. They were housed in the departmental animal room under standard condition of temperature and fed on standard pellet diet. Institutional animal ethical committee no. 1122/PO/ERe/S/07/CPCSEA/15.

Toxicity Studies: The toxicity studies was performed in according to OECD guidelines No. 425 and dose of 1000 mg/kg did not cause any toxic effect in case of Inula racemosa and Bombax ceiba while a dose of 1200 mg/kg was non toxic in case of Allium sativum.12

Statistical Analysis: The Data is expressed as Mean ± SEM and was analyzed by one way Anova followed by Dunnet’s test by software Graphpad.

Non specific Immunity determined by survival rate against fungal infection: Treatment of all the three groups started 14 days before challenge. On the day of challenge all groups were injected with 5 x 107 viable Candida albicans cells observed daily for mortality for a period of 10 days.13

In vivo Phagocytosis using carbon clearance method: In this study the treatment of all the groups started 14 days before experimentation. On 15th day of treatment, animal were injected with 0.1 ml of carbon suspension intravenously through tail vein. Blood samples (25µl) were collected before and after 4, 8, 12 and 16 minute after injection. Blood of samples were lyzed with 2 ml of 0.1% acetic acid and absorbance was recorded at 675 nm. Rate of carbon clearance is the measure of reticuloendothelial system. In the present study an increased Phagocytic activity was observed in treated groups as compared to control group.

SRBC- Induced Delayed type of Hypersensitivity Reaction (DTH Response): Hypersenstivity reaction to SRBC was performed by dividing the animals into three groups of six animals each and the treatment started 14 days before challenge. All the groups were immunized by injecting 20 µl of 5 x 10 9 SRBC per ml subcutaneously into the right foot pad. After 14 days of treatment thickness of left foot pad was measured using calipers reading to 0.01 mm.

The mice were then challenged by injecting 20 µl of 5 x 10 9 SRBC per ml intradermally on the left hind foot pad (time 0). Foot thickness was measured after +24 and +48 hours of challenged. The difference between the thickness of left foot just before and after the challenge in mm was taken as a measure of DTH.16, 17

Neutrophil Adhesion Test: In this method after 14 days of treatment of all the three groups, blood samples were collected by retroorbital puncture in heparinzed vials and subjected to total as well as differential leukocyte count. After initial counts the blood sample were incubated with 80 mg/ml of nylon fibers at 37°C for 15 minutes. The incubated sample was again analyzed for total and differential Leukocyte count.  The product of total leukocyte count and % neutrophil known as neutrophil index was determined for each of the respective groups. The % neutrophil adhesion for each of the test groups was determined as follows,

On 15th day of treatment, all the mice were scarified and blood was collected in heparinized vials. Blood samples for animals of each group were subjected for hematological and serological studies such as hemoglobin content, total RBC, total and differential WBC and platelet counts.19

Survival rate studies: The survival rate of the treated animals was considerably enhanced after treatment with polysaccharide fraction of Inula racemosa, Bombax ceiba and Allium sativum. The administration of Fructans fraction at a dose of 100 mg/kg and 200 mg/kg increase the survival rate by 54% and 59% in case of Inula racemosa (Table 1) and 45% and 51% in case of Bombax ceiba (Table 2) and Allium sativum (Table 3) respectively.

The values are expressed as Mean ± SEM, n=6

DISCUSSION: The scientific evidence collected from the study reveals that the claimed traditional activity of immunomodulation of Inula racemosa, Bombax ceiba and Allium sativum due to its polysaccharide fraction is marked. The polysaccharide fraction of the drugs shows potentiation of immune stimulation in performed all the models. The increase in survival rate is a general marker exhibiting potency of the fructan fraction against infectious condition. Increased carbon clearance is an indicator of enhanced in vivo Phagocytic activity and ability of granulopoetic system in removal of foreign particles or antigens. Increase in percent of neutrophil adhesion shows improved defensive response. Thus the study shows some positive stimulation of immune response due to presence of polysaccharide.

CONCLUSION: The Non digestible polysaccharide which are believed to hydrolyzed to small oligomers and monomers and which are further metabolized by anaerobic bacteria. The hydrolyzed product when reached to systemic circulation act as regulators for various metabolic pathways. One of pathways may be immunostimualation. Some European countries have permitted these oligosaccharides and polysaccharides in their food supplement. Thus proper isolation and characterization of these fructan fractions may open new avenues in the field of polysaccharide research.

ACKNOWLEDGEMENT: The authors are thankful to Advance Institute of Biotech & Paramedical Sciences, Kanpur for providing all the Research and Lab facility.