INTRODUCTION: Immune system is a complex organization of white blood cells, antibodies, and blood factors that protects the body from foreign invaders, while simultaneously maintaining self-tolerance. The basic function of the immune system is to protect against foreign pathogens and infectious agents. This is achieved either through innate or natural immunological mechanisms which essentially serve as a short term first-line defense or through elaborate adaptive mechanisms which are highly specific, complex, and marked by diversity and memory.

When the immune system hits the wrong target, however, it can unleash a torrent of disorders, including allergic diseases, arthritis, and a form of diabetes. If the immune system is crippled, other kinds of diseases result in 1.

Due to the wide range of effector mechanism possessed by various groups of immune cells and its ability to exert effects with exquisite specificity, the immune system provides a good target in cancer therapy. Involvement of the host immune system in the control of cancer progression has been suspected but remained inconclusive for many years. Innate immunity, which, according to the immune surveillance theory is responsible for early detection and elimination of malignant cells, may be inefficient patients who develop a malignancy. Evidence is convincing that individuals who are older, who have been on immunosuppressive medications over prolonged periods, or have underlying immune abnormalities, such as an autoimmune disease or a chronic infection (e.g., AIDS) are particularly at risk of malignancy. Traditional and folklore medicines play an important role in health services around the globe. About three-quarters of the world’s population relies on plants and plant extracts for healthcare. India has an extensive forest cover, enriched with plant diversity. Several plants have been used in folklore medicine. The rational design of novel drugs from traditional medicine offers new prospects in modern healthcare.6 Ayurveda, the traditional medicinal system in India, describes certain plants which strengthen the host immune system 2.

Kigelia africana (Lam.) Benth. (Bignoniaceae) is widespread across India and Africa and is found in most wet savannah and river line areas. Growing over 20 m high, it is semi-deciduous with smooth grey-brown bark. The fruits are large grey-green “sausages” about 30-60 cm long which hang on stalks from the tree. The fresh fruit is poisonous and strongly purgative; for safety reasons, fruits are best prepared for consumption by drying, roasting, and fermentation. The scientific literature confirms the validity of many of these traditional uses due to the presence of numerous secondary metabolites. These compounds include iridoids, flavonoids, fatty acids, sterols, glycosides, and naphthoquinones 3, 4.

Preparation of Extract: 100 gm powdered leaves parts were subjected to successive extraction in a Soxhlet extractor using methyl alcohol. The extract obtained was concentrated in a rotary shaker and evaporated to dryness to get constant weight.

Preliminary Phytochemical Screening: 5 Methanolic extracts of KA were subjected to preliminary phytochemical screening using the methods described by Kokate, Trease, and Evans for the detection of various plant constituents.

Isolation of Flavonoid: 6 The method employed for the isolation of flavonoids was of Jang et al. (2003) with modifications. 200 gm of K. africana powder were defatted with hexane is a Soxhlet extractor. The marc was pressed and dried. The defatted powder was extracted with methanol in a Soxhlet extractor for 16 h. The methanol extract was filtered and concentrated to dryness in a rotary shaker evaporator. The concentrated extract was dissolved in 80% methanol with stirring and filtered. Methanol fractions were subjected to chemical analysis. Methanol extract fraction was concentrated kept in the refrigerator overnight. As there was no crystal formed, the solvent was evaporated to dryness. The residue answered the test for flavonoids.

Antigen: Fresh blood was collected from sheep sacrificed in the local slaughterhouse. Sheep red blood cells (SRBCs) were washed three times in large volumes of Alsever’s solution and adjusted to a concentration of 0.5 × 109 cells/ml for immunization and challenge.

Selection of Dose and Treatment period: The animals were divided into four groups consisting of six animals each. The first group served as control (vehicle 1 ml/100 g, po), the second group received Levamisole at a dose of (2.5mg/Kg, po).The third and fourth group received the low dose (100mg/Kg, po) and a high dose of Flavanoid of Kigelia africana respectively.

The acute toxicity study was carried out according to the limit test described in the OPPTS guidelines. Briefly, a test dose of 2 g/kg and 5 g/kg were given orally to the mice. The extract was found to be safe at the dose of 2 g/kg, po. Hence, 1/10th and 1/20th of the safe dose corresponding to 100 mg/kg and 200 mg/kg orally were selected as a low and high dose, respectively.

Carbon Clearance Test: 11 Swiss albino mice were treated with the drug or vehicle orally for 5 days. After 48 h of the last dose of the drug, animals have injected 0.1 ml of Indian ink via the tail vein. Blood samples were withdrawn at 0 and 15 min after injection. A 50 μL blood sample was mixed with 4 ml of 0.1% sodium carbonate solution, and the absorbance of this solution was determined at 660 nm. The phagocytic index K was calculated using the following equation:

Where OD1 and OD2 are the optical densities at 0 and 15 min respectively.

Cyclophosphamide Induced Neutropenia:  12 Swiss albino mice received the drug or vehicle orally for 10 days. On the 10th day, a neutropenic dose of Cyclophosphamide (200 mg/kg, sc) was injected, and this day was labeled as day zero. Blood was collected, the total leukocyte count (TLC) and DLC were performed before and on day 3 after injection of Cyclophosphamide. The TLC and neutrophil counts (%) in treated groups were compared with the values of the control group.

Indirect Haemagglutination Test (IHA Test) 13, 14: Rats were pre-treated with the drugs for 14 days, and each rat was immunized with 0.5 × 109 sheep red blood cells (SRBCs) intraperitoneally, including control rats. The day of immunization was referred to as day 0. The drug treatment was continued for another 14 more days, and blood samples were collected from each rat at the end of the drug treatment, and the titer value was determined by titrating serum dilutions with SRBC (0.025 × 109 cells) in microtitre plates. The plates were incubated at room temperature for 2 h and examined visually for agglutination. The minimum volume of serum showing Haemagglutination was expressed as Haemagglutination (HA) titer.

Effect on Serum Immunoglobulin: 18, 19 The drugs were administered to female albino rats orally for 21 days. Six hours after the last dose of the drug, blood was collected, and the serum was used for estimation of immunoglobulin levels using the method devised by Mullen (1975). Briefly, for each serum sample to be analyzed, a control tube containing 6 ml of distilled water and a test tube containing 6 ml of zinc sulfate solution was prepared. To each, 0.1 ml of serum was added from a pipette.

They were inverted to enable complete mixing of the reagents and left to stand for 1 hr at room temperature. The first tube served as blank and the second tube was taken as a sample. The turbidity developed was measured using a digital nepheloturbidity meter. The turbidity obtained (sample-blank) was compared with that obtained with standard barium sulfate (BaSO4) solution. The standard BaSO4 solution was prepared by adding 3 ml of barium chloride solution (1.15% w/v) to 97 ml of 0.2 N sulphuric acids. The turbidity obtained with this solution was expressed as 20 zinc sulfate turbidity (ZST) units.

Statistical Analysis: The results are expressed as mean ± S.E.M. Data analyzed by one way ANOVA followed by the "Turkey’s Multiple Comparison Test." P values are P<0.05*, P<0.01**, P<0.001*** as compared with control were considered.

Preliminary Phytochemical Screening: The presence of various phytoconstituents of the extracts was detected by phytochemical screening. The KA found to contain Steroids and Triterpenes, phenolic compounds, tannins, and flavonoids.

Effect on Carbon Clearance Test: Both the doses of Flavanoid of Kigelia africana and LMS showed significant (*P<0.05) increase in the phagocytic index when compared to control indicating that there was an increase in the clearance of colloidal carbon from the blood after administration of these drugs.

The FKA showed a significant (P<0.001) increase in the hemagglutination titer at doses of 100 mg/kg, po, and 200 mg/kg, po in animal studies compared to the control group. This augmentation of the humoral response to SRBC indicated enhanced responsiveness of the macrophages and T and B lymphocyte subsets involved in antibody synthesis Table 3.

Effect on Serum Immunoglobulin: Both the doses of Flavanoid of Kigelia africana and LMS showed a significant (**P<0.01, ***P<0.001) increase in the serum immunoglobulin levels when compared to control. 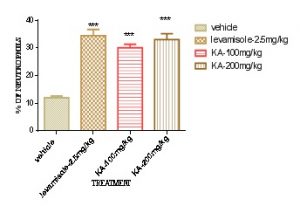 FIG. 1: EFFECT OF FLAVONOID OF KIGELIA AFRICANA ON NEUTROPHIL ADHESION TEST IN WISTAR RATS. Values are expressed as mean ± SEM.  n=6, ***P<0.001 when compared to control.

DISCUSSION: The results of the present study suggest that Flavonoid of Kigelia africana affects humoral immunity as shown by its effect in the indirect Haemagglutination test and serum immunoglobulin levels and it also has an effect on the cell-mediated immunity as it showed a significant increase in the neutrophil adhesion, carbon clearance and a reduction in cyclophosphamide-induced neutropenia.

Findings of the present study showed an overall stimulatory effect of Flavonoid of Kigelia africana on both humoral and cellular immunity.

ACKNOWLEDGEMENT: Authors are thankful to the Department of Pharmacology, Karnataka College of Pharmacy, Bangalore, Karnataka, for providing constant support and lab facilities.