Panchagavya, a classical Ayurvedic preparation, was evaluated for its antioxidant potential by HPTLC-DPPH bioautography method as well as assays for Ferric reducing antioxidant power (FRAP), DPPH – free radical scavenging activity (DPPH) and Superoxide radical scavenging activity. In addition total phenolic content was also estimated which was in fairly good amount. HPTLC-DPPH bioautography study revealed the presence of several antioxidant compounds in Panchagavya. In all the assays performed, it showed considerable antioxidant activity. On comparison of the data of three different batches of the samples studied, it showed 98.3 - 99.8% correlation between total phenolic content, FRAP and DPPH assays.

INTRODUCTION:Ayurveda, the ancient Indian system of medicine, with its holistic approach takes into account the aetiological factors, disease condition, patient’s psycho-somatic condition, food and even activities altogether while deciding the line of treatment. It mentions use of various plant, animal and mineral products as such and in unique combinations for treatment and positive health maintenance. Many materials, which can hardly be termed as drug by prevalent norms, are also utilized in the treatment. Panchagavya- a peculiar combination of five cow products namely dung, urine, milk, curd and ghee 1, is one such drug which has been advocated in Ayurvedic classics as such in Vishamajvara 2 (malaria/typhoid), for detoxification of body/toxicity management 1 while in processed form (viz. Panchagavya ghrita) for psychogenic and neurogenic disorders 3.

In recent days, its use in management of cancerous conditions is also a practice in vogue.

Free radicals play an important role in degenerative diseases like cancer, cataract, immune system weakness and brain disorders, collectively called oxidative stress 4. Amount/availability of free radicals are controlled by systems called antioxidants which can reduce oxidation rate considerably and are synthesized in the body as well as supplied by dietary sources and nutraceuticals. Applicability of antioxidants in management of oxidative stress related disorders has been suggested 5.

The experiments were carried out at RMD Research and Development Center during October 2011 to January 2012.

Preparation of Panchagavya: 25 ml of freshly collected cow urine was added to 12.5 g freshly collected cow dung and uniformly mixed by stirring. The mixture was passed through a cotton cloth by squeezing and then strained repeatedly (7 times) through a cloth. To the filtrate 5 ml cow milk (boiled and cooled) and 5 ml curd (prepared by using cow milk) were added, mixed thoroughly, to it 4 ml molten cow ghee was added and again mixed well to prepare a homogeneous mixture. This freshly prepared Panchagavya was used for the study.

For the present study three batches of Panchagavya were prepared in three different days.

Preparation of sample: To 1 g Panchagavya 10 ml methanol was added, stirred well and sonicated for 60 minutes. It was filtered; the volume of the filtrate was made to 10 ml with methanol (PG) and was used for further study.

To 0.1 ml of the sample (PG), 3.9 ml distilled water and 0.25 ml of working Folin-Ciocalteu reagent were added. After 5 minutes (but before 8 minutes), 0.75 ml of sodium carbonate solution was added, mixed and incubated at room temperature for 60 minutes. The absorbance was measured at 765 nm. Different volumes of Gallic acid solution were used in same manner for calibration of standard curve and quantification was done in terms of mg equivalent of Gallic acid. The blank was prepared by using distilled water in place of sample/standard.

0.1 ml of PG was added to 3.0 ml of FRAP working reagent, mixed well and absorbance was measured after 10 minutes. Freshly prepared aqueous ascorbic acid solution (0.1 mg/ml) was used as standard. Different volumes of ascorbic acid solution (equivalent to 10 – 80 µg) were used in same manner for calibration of standard curve and quantification was done in terms of mg equivalents of ascorbic acid. The blank was prepared by using distilled water in place of sample/standard.

Sample preparation: 1 ml of PG was dried on mild heat in a water bath; the residue was taken with methanol to make 1mg/ml (PGE1) and used for the test.

Different volumes (equivalent to 5 - 300 µg) of PGE1/standard were taken in a set of test tubes and methanol was added to make the volume to 3 ml. To this, 1 ml of DPPH reagent was added mixed thoroughly and absorbance was recorded at 517 nm after 30 minutes incubation in dark at room temperature. 1 ml of DPPH reagent diluted to 4 ml with methanol was taken as reagent blank. Percent scavenging activity was calculated as

1.539 ml of Riboflavin, 6.132 ml of NBT, 2 ml of EDTA stock solutions were mixed in this sequence. To it 65-70 ml of phosphate buffer was added and mixed thoroughly. To this mixture, 193.96 mg of methionine was dissolved completely and the resultant solution was diluted to 120 ml with phosphate buffer and was used as reaction mixture.

Sample preparation: 1 ml of PG was dried on mild heat in a water bath, the residue was taken with water to make 1mg/ml, sonicated for 15 minutes to prepare a homogeneous suspension (PGE2) and used for the test in different concentration range. Different volumes of PGE2/standard were taken in test tubes, 3 ml of the reaction mixture were added, mixed and phosphate buffer was added to make the volume to 4.5 ml.

After mixing the tubes were exposed to fluorescent light (30 W) for 40 minutes (taking care of equal illumination exposure) and the absorbance was measured at 560 nm. 3 ml of reaction mixture diluted to 4.5 ml with phosphate buffer was taken as reagent blank. Percent scavenging activity was calculated as 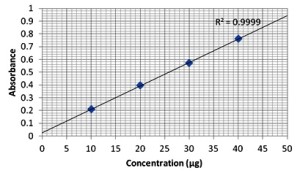 The total phenolic content of the samples, expressed in terms of mg gallic acid / g of Panchagavya has been presented in Table 1.

The total phenolic content in three batches of Panchagavya is in between 0.55 to 1.65 mg/gm in terms of gallic acid equivalents, which is significant as Panchagavya daily dose is about 150 ml i.e. about 160 g and is comparable with plant materials of known antioxidant activity 13, 15-20.

The response of Folin-Ciocalteu reagent depends on chemical structures of phenolics which are of various types and of different polarities. Panchagavya being a natural product combination, variation is expected. 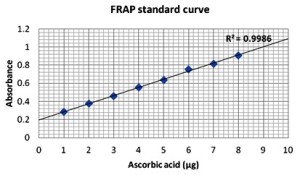 The FRAP value varied between 0.22 - 0.89 mg/g of Panchagavya (Table 2), keeping a correlation with their phenolic content. 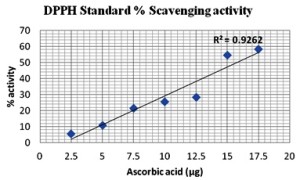 DPPH scavenging activity of Panchagavya samples has been presented in Table 3.

The DPPH scavenging activity of PGE1 revealed a peculiar pattern. The activity tends to decrease beyond the concentration 200 µg (Figure 5). 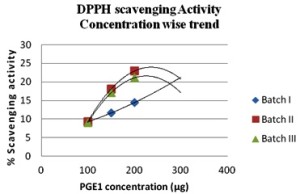 The usual trend to show scavenging activity is by indicating IC50 (Half-maximal Inhibitory concentration) which Panchagavya is unable to show. The reasons may be of interference by other chemical molecules competing for reduction by DPPH or having higher internal activity scavenging chain reaction, not permitting DPPH be donated with an electron. IC50 for ascorbic acid was 15.78 µg. 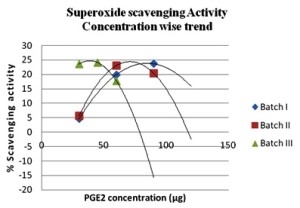 Superoxide anion is a reduced form of molecular oxygen and has a role in oxidation reaction associated with ageing 21. Superoxide can directly initiate lipid peroxidation 22.

The batch wise trend of TPC as well as FRAP and DPPH activity was compared and is shown in Figure 7. 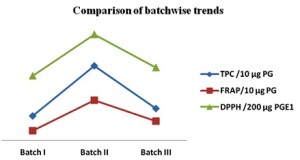 Free radicals are generated in both aqueous and lipid portions of intracellular and extracellular environments; so it is crucial for the body to have a combination of water soluble and lipid soluble antioxidants to acquire the full range of protection. Some types of antioxidants are synthesized by the body while others are obtained from external sources like food, nutraceuticals 5.

Panchagavya is a unique preparation having both water based (colloidal milk without fat portion, urine, curd and dung) and fat based (ghee, milk with fat particles) products. It is likely to provide both polar and non-polar natural antioxidants.

The data of the antioxidant study revealed uncommon activity limiting behavior. The probability of its higher activity in low concentration at cellular level cannot be ruled out but requires detail study.

Since both water and lipid soluble antioxidants are needed by the body for intra and extracellular clearance of the oxidative stress and Panchagavya contains both water based and lipid based products, it has advantage as potential antioxidant.

The study indicates some basis for the practice of using Panchagavya in cancer.